I first want to write that this was probably the most difficult year to choose a Top 10 since I've been doing these countdowns.  Integrity Toys really went all out with their production dolls in 2017.  It's been a very long time since we've seen so many beautiful versions of so many different molds!  There is usually enough wiggle room in my countdown for at least one Mattel doll ... but not in 2017.

Many dolls that I truly love were not included in my countdown.  In an effort to diversify my list, I made a conscious choice to not include more than one version of any mold (which was a very hard decision to make).

In 2017, collectors received the NuFace Reckless Collection that was previewed in 2016.  There were 7 dolls in that collection, and not one bad apple in the bunch!  I Slay Nadja Rhymes, Smoke & Mirrors Lilith Blair, and Total Betty Ayumi Nakamura were all worthy of positions in my Top 10.

By choosing AKA Gigi for my countdown,  I eliminated Majesty,  Sister Moguls, Wanderlust, and, most regrettably, Feeling Wild.  If you're counting, that's five Giselles in 2017!

21 NuFace dolls were produced and shipped (or made available at convention) to collectors.  There's no wonder my countdown was heavy with NuFace (5 out of 10 places this year)!  Congratulations to Jessy Ayala for an awesome design year!

It's nice that 2017 was the year of NuFace since 2016 was the year of Poppy Parker.  Only one Poppy shows up on my countdown this year even though 15 were produced.   This isn't a reflection of the designs or quality of production because I really love Popster, Sign Of The Times Blonde, Taste of Champagne, Sunny Slickers, Through The Woods, and Fairest of All.   There were just so many great dolls this year.

Although I chose Constance Madssen to represent Victoire/East 59th lines, Evelyn Weaverton was not a mold to be ignored.  Chris Stoekel did a fantastic job with his classic designs.

I also struggled with leaving AA Tulabelle (from the Fairytale Convention's "The Industry" line) off my list.  There were 13 dolls produced for "The Industry" in 2017.  I wasn't going to add a doll with this body type to my collection, but I loved the AA Tulabelle so much!

And I don't even collect Color Infusion or Jem dolls!

This brings me to the regular FR2 lineup which had 13 dolls produced for collectors in 2017.  Already representing FR2 are Vivacite Eugenia and Exquise Adele Makeda.

"After seeing this list of dolls, how many "bite-sized" pieces do you think I should cut this into?" 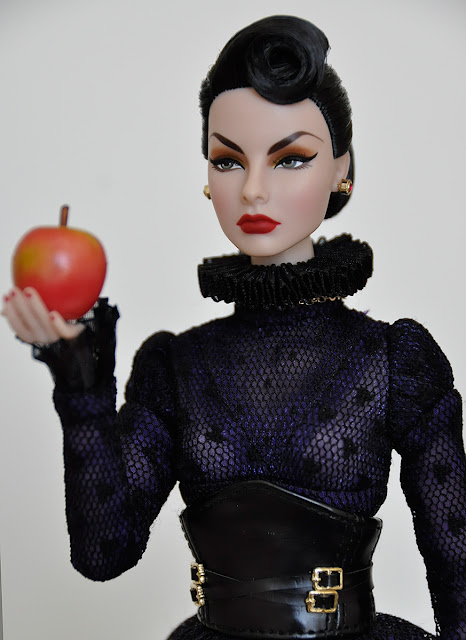 Don't worry Agnes ... You've nothing to worry about.   There's no need to start poisoning the other contenders.  You've appeared on my countdown numerous times, but never at the Number 1 spot.  But, 2017 is definitely your year!

"Well, it's about damned time!"

I couldn't have described my idea of a perfect Agnes any better had Jessy Ayala asked me, "What do you want in a version of Agnes Von Weiss?"   This dolls reminds me so much of a refined Wicked Valentine.  I did not have a brunette, brown eyed, short-haired Agnes Von Weiss in my collection until this version.

Here is Queen of Everything Agnes Von Weiss in her box. 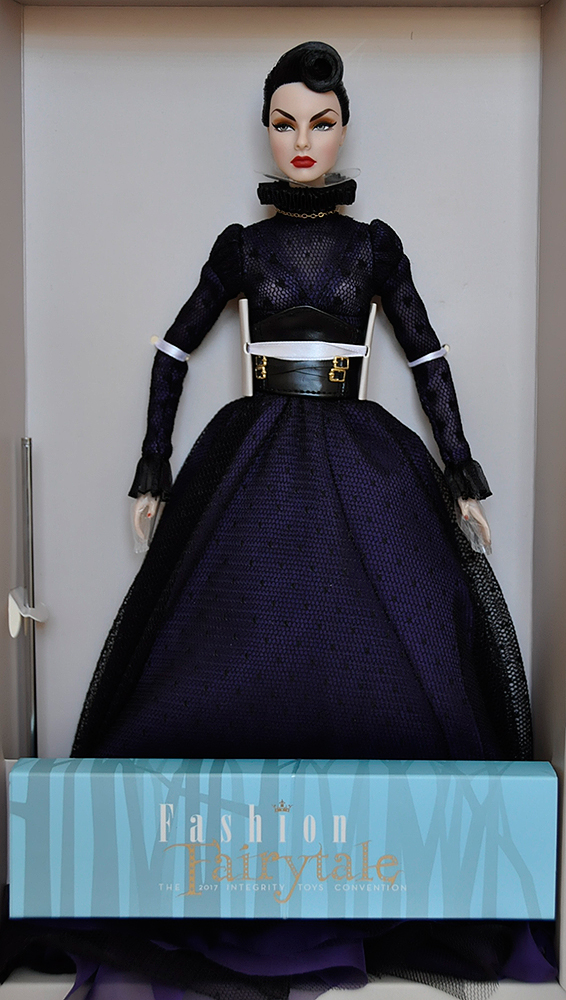 She was a table centerpiece at the Fairytale Convention.  Her edition size was 420.  And here's a close up. 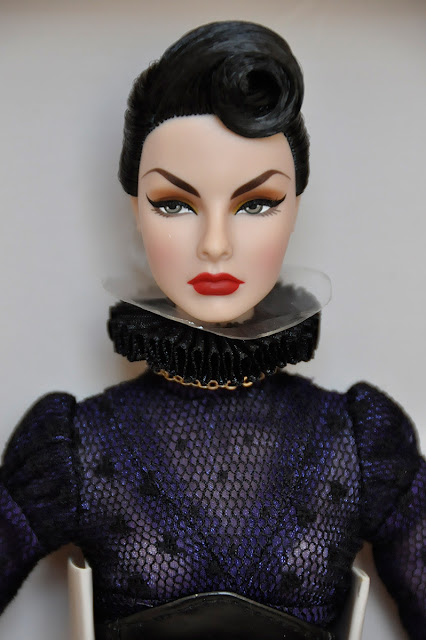 Her accessories were minimal, but I didn't care.  There were some phenomenal knee boots, another set of hands, and pair of red jewel stud earrings. 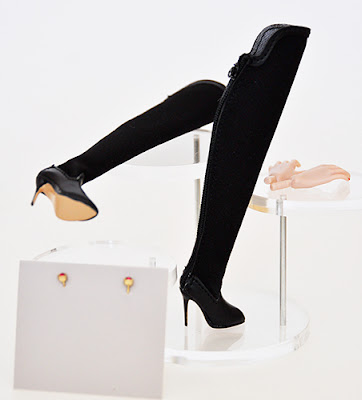 This doll is just everything.    I'm not a collector whose dolls stand around in gowns, but this one is not bad.  I love the chain at the neck under the black ruff.  (The apple did not come with her, but it really should have!) 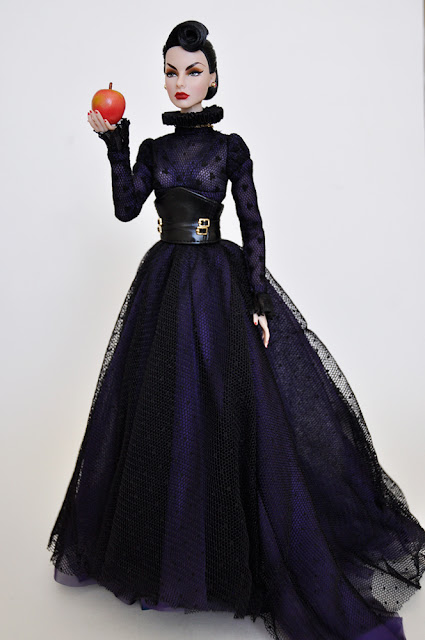 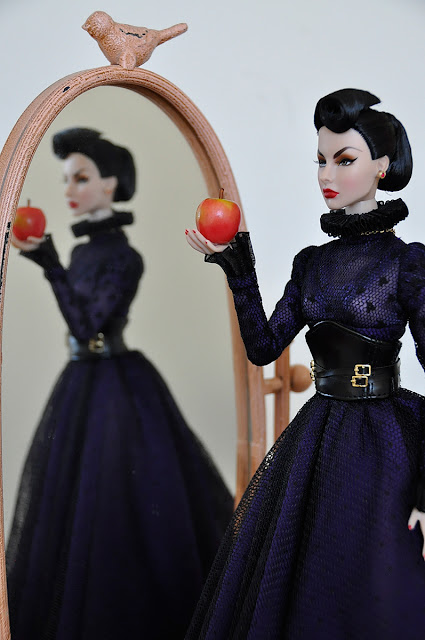 Does she even need to ask? 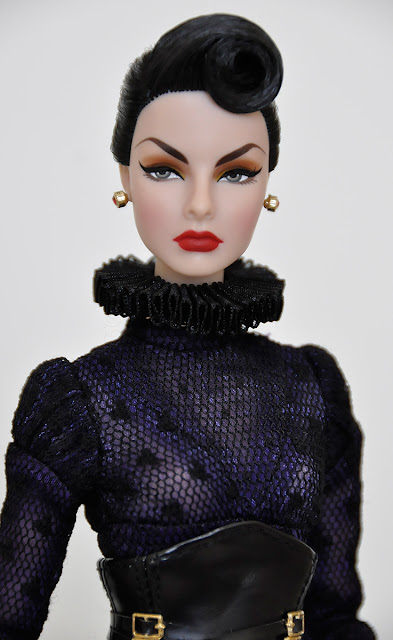 And can she redress well?  What do you think? 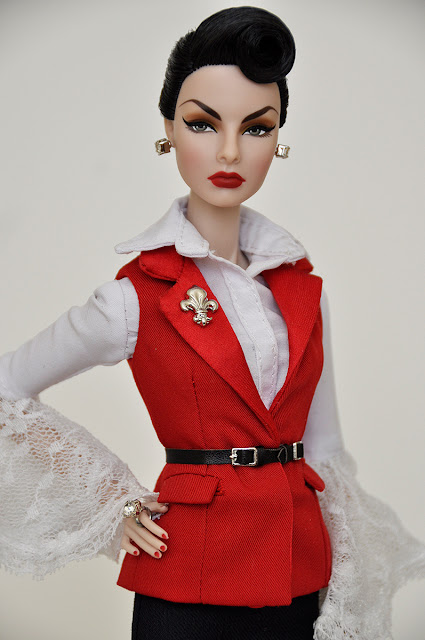 Posted by Desperately Seeking Dolls at 9:50 AM 6 comments:

If 2016 was the year of Poppy Parker, 2017 is definitely the year of NuFace.  Already on the countdown I've listed Giselle, Nadja, Rayna, Lilith, and Eden.  It's no surprise that another NuFace character shows up at the Number 2 spot.

I've never been a big fan of Erin Salston, especially mold 2.0.   But then along comes She Owns Everything from the 2016 Reckless line.  What an amazing doll.  I completely missed this version until collectors' photographs started appearing online.  I had to break one of my guidelines and purchase her secondary market. 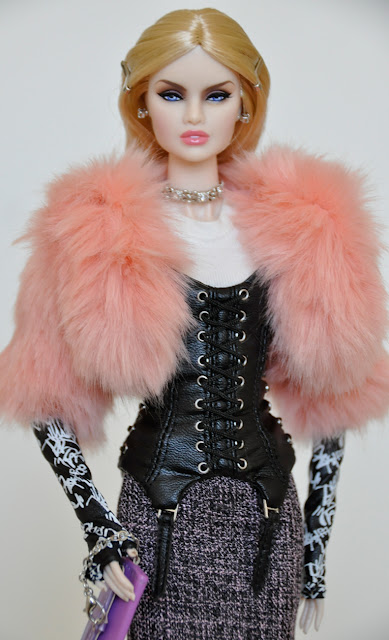 She Owns Everything had to be a fluke of production.   Right?  Then alongs comes 24k at the Fairytale Convention.  I have already reviewed this doll:  Review of 24k Erin Salston.

Here she is modeling inside the pop-up diorama offered to W Club members as an upgrade option on their membership. 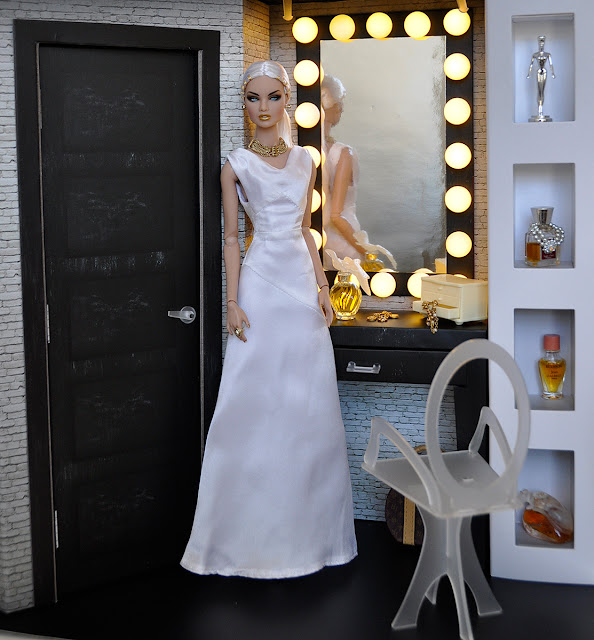 This doll looks phenomenal in everything she wears. 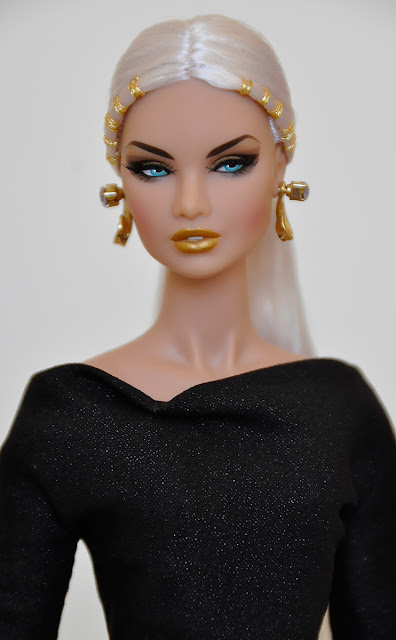 This doll has quickly become a muse of mine; the only adjective that comes to mind is "ethereal".   Best of 2017 - Number 2 is 24k Erin Salston. 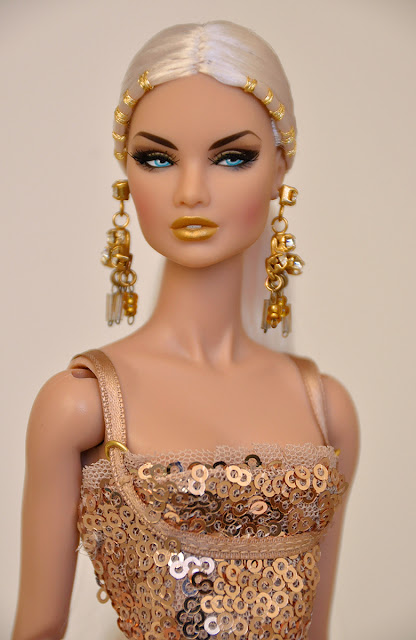 Posted by Desperately Seeking Dolls at 11:35 AM 6 comments:

"The Boss Is Back" - If you are a fan of America's Next Top Model, you probably know this is the title of the first episode of the new season because Tyra Banks has returned to an active role on the judging panel.  Adele Makeda mold 2.0 has always reminded me of Tyra Banks, and the latest version firmly stakes her claim in the Fashion Royalty lineup. 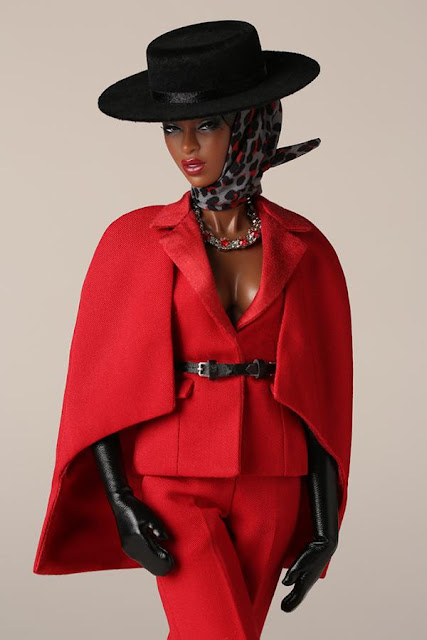 The screening is an homage to Talking Drama from 2007.  Mold 2.0 was "retired" in 2011, but collectors have refused to let this version go.  There was an ITBE version (Gold Glam) in 2013 and  five FR2 versions (if you count the recently announced W Club exclusive).

Mold 2.0 is one of my very favorite FR molds and Exquise Adele Makeda does not fail to deliver.  Here is a photo in the box.

And a closeup.  Now that's one beautiful doll face! 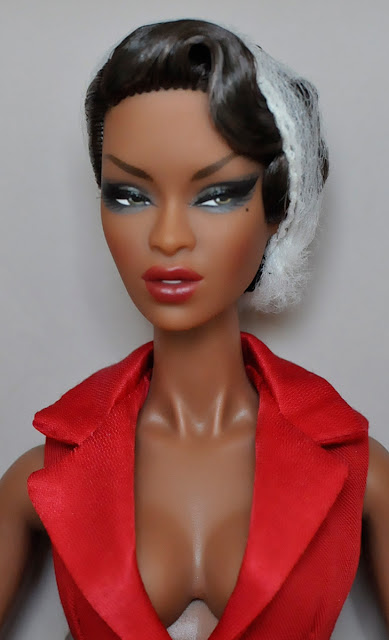 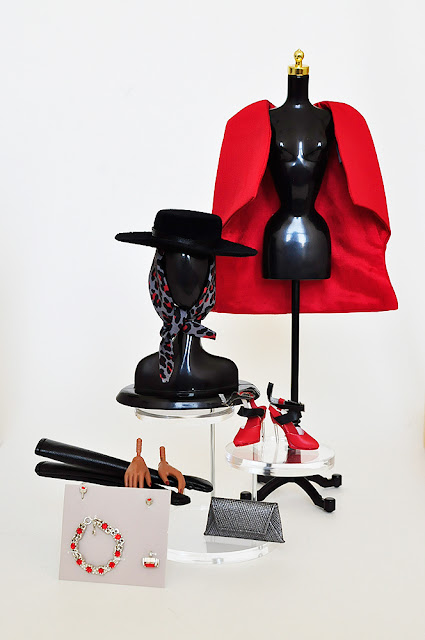 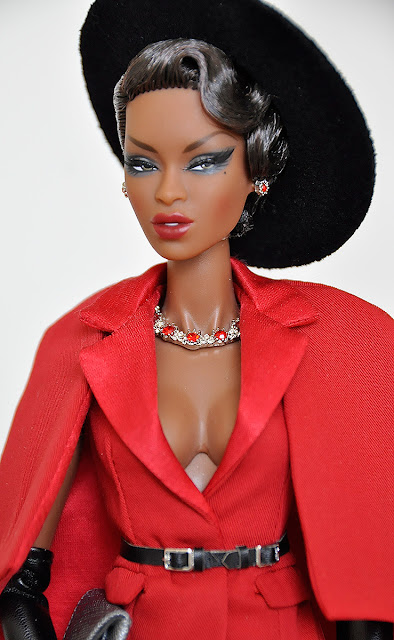 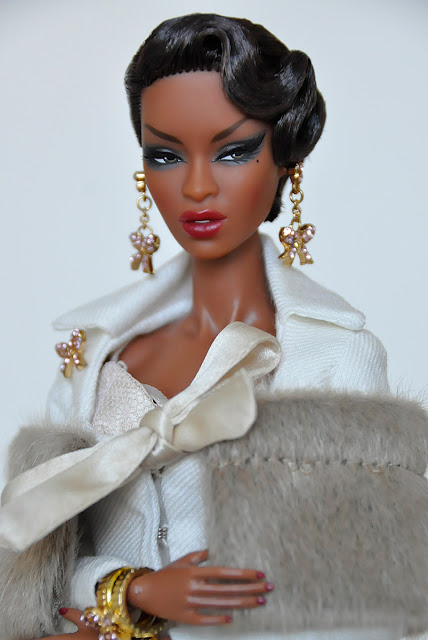 Posted by Desperately Seeking Dolls at 5:37 AM 4 comments: