How should I be looking at my glass?

I made it through six months this year and managed to keep my two New Year's Resolutions:

1)  No new doll that comes into this house will stay in its box for more than two weeks.  It will either come out of the box or be sold.  (Amended:   It can stay in its box as long as one of the NRFB dolls comes out of a box- that way the number of boxed dolls will not increase.)

Unfortunately, I think the following photo sums up my doll shopping experience this month. To quote, Penelope, "Full steam ahead!" 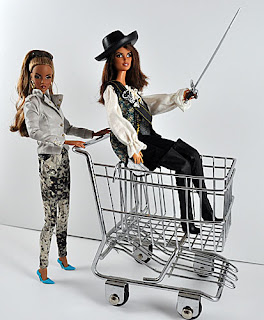 With the recent first release of Integrity Dolls and the "Buy One Get One Free (BOGOF)" deal at Toys R Us, I have completely upset my apple cart.

While I was at Toys R Us, I literally lost my mind.  (If anyone happens to be shopping in the Athens, GA Toys R Us and finds it, please forward it to me.)   Other than the Barbie Basics, I haven't purchased many Barbies lately, but the BOGOF sale was just too much to resist.  I believe this photo pretty much sums up my doll shopping for the month of July. 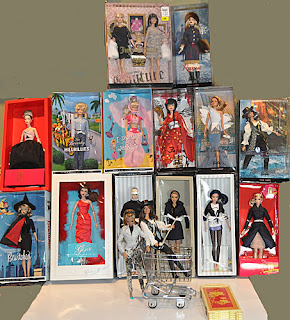 I got the Bewitched, I Dream of Jeannie, and Beverly Hillbillies dolls.  I watched these series as a child and they were my very favorite shows.  Now if I could get Mary Ann and Ginger dolls from Gilligan's Island, all my favorites would be represented!

I picked up the Japan doll because I found one with terrific hair and screening.  I also added the Russia doll and Sydney Opera House doll.  I love the screening on the Sydney doll and hope the hair can be tamed and managed.  I got an extra Pirate doll for a body donor for this girl.  (I know several collectors bought multiples of this doll so they could use the body for other dolls.)  Eight dolls and $160 less in my bank account, I left the store with my arms loaded and a big smile on my face.

My readers met Heat of Glass Aria in my last blog.  The other dolls I purchased from the Plastic Inevitable line were Rock Candy Rufus Blue and Most Beautiful Boy Auden.   Auden is probably the best male doll IT has ever produced.  BUT his price on the secondary market makes me scared to take him out of the box.  He has sold for over $500.  Should I sell him and use the money for a grail doll?  or should I just let him out?   All three DG dolls were pre-ordered and I paid retail price.

The other three IT dolls are Magnificient and Extravagance Monograms (purchased at retail from an Integrity dealer) and Red Desire Mini-Gene which was purchased on the secondary market at original price.

When I went home this week for a reunion of my mother's family (many followers know that I lost my mother this year to cancer), I stopped at the Tuesday Morning nearby.  I found the Juicy Couture set for $39.99 and just couldn't leave it behind. 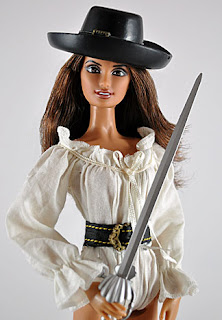 I think one of the most pleasant surprises from Mattel this year was the Pirates of the Caribbean dolls.  Not only is the screening terrific, the dolls are on articulated bodies.   The Angelica (Penelope Cruz) doll is actually on a Barbie Pivotal body.  The outfit is actually quite well made, allowing for many redressing possibilities.   You can see that the pirate blouse (reminds me of that Seinfeld episode) is actually a body suit that slips on and off easily.

The bustier is separate and closes with a snap.   The little sword is amazingly detailed.  The only disappointments were that the the boots were not actually boots and her hair is rather messy.  With a proper reroot, I think she would be amazing.

I'm sure everyone here can count.  There are sixteen dolls (17 if you count both dolls in the Juicy Couture giftset) in the photo.  When added to the 8 dolls already added to my collection this year, that brings my total to 24/25 dolls.   22 dolls have left this year, so I am officially upside/down in my resolution.  I also have A LOT of deboxing to do.

It's always wonderful to have dolly friends.  When I was talking to my sister about the amount of money I spent this last month, she said, "But you purchased everything at either retail price or at the Buy-One-Get-One-Free sale.  So, it's better to look at this as how much money you saved!"  I guess the glass is actually half-full.
Posted by Desperately Seeking Dolls at 9:35 PM 3 comments: