I was trying to be really good this month.  Everyone is waiting for the Integrity Toys Convention announcement and registration.  There is supposed to be another reveal at the end of the month.    I'm still paying off Christmas bills.

Last year, I sold my Head For Glamour Agnes.  Her eyelash had fallen off and I thought she favored Dressing the Part too much.  The flickr group has been posting some exceptional photos of this doll, so I've regretted selling her.  She recently came up on secondary market, nude, at an affordable price.

"That's right!  I knew I would worm my way back into your collection!  You are a mere doll collector who is mortal.  You simply cannot resist me!" 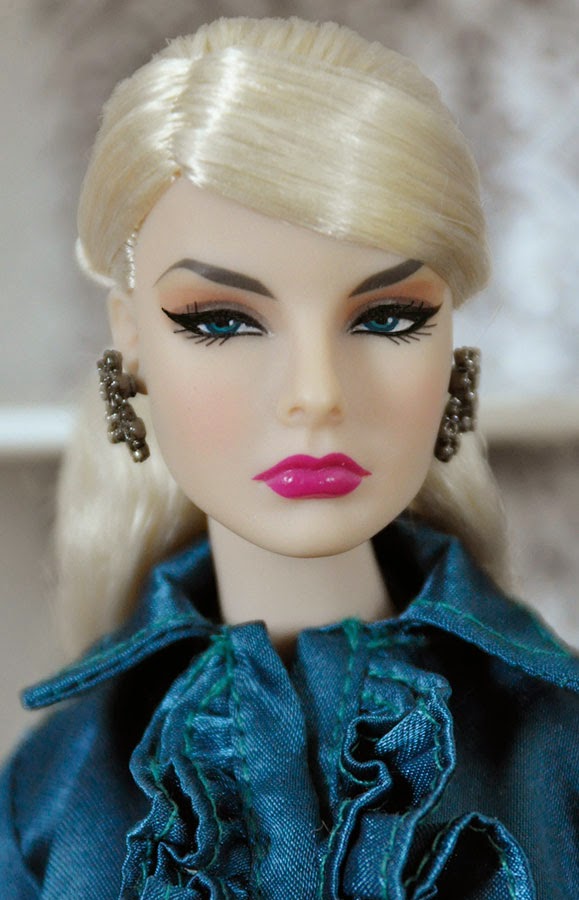 "By the way, I really like this closet.  Mattel Toys did a great job on this.  It looks like your taste is not too bad for a human.   It seems you have some very nice clothing for me.  There are only have four of these?  That's hardly sufficient for my needs." 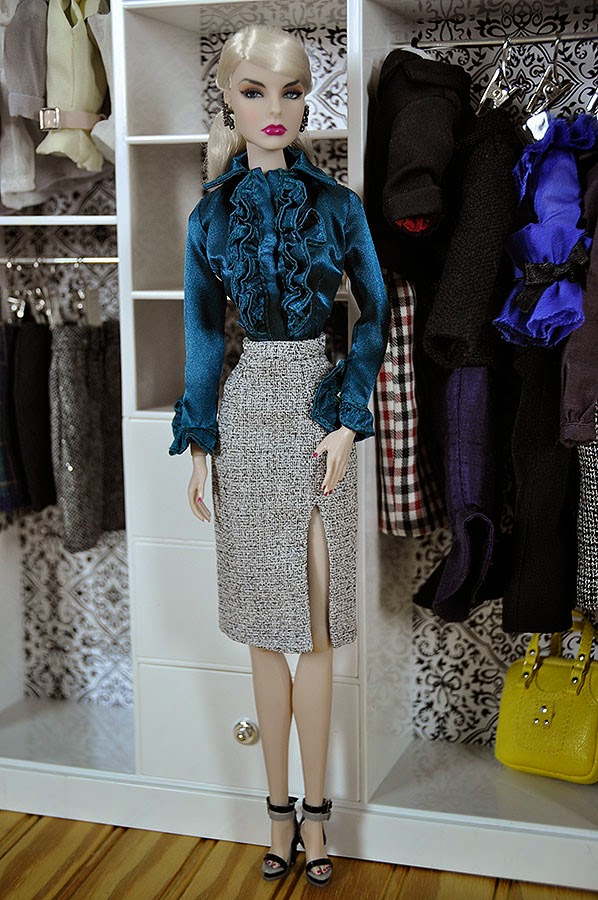 Which leads me to my other acquisition.  A collector was selling a re-rooted High Gloss Agnes on one of the doll boards.  As you know, this doll has been on my "Grail List" for years.   I have never owned a re-rooted doll before, but the price was quite reasonable.  Someone cut this doll's hair a little short for my liking, but who can resist such a beautiful face?

"Who can resist such a beautiful face?  Me of course!  Because it's my face!  Get out of that bed lazy bones!" 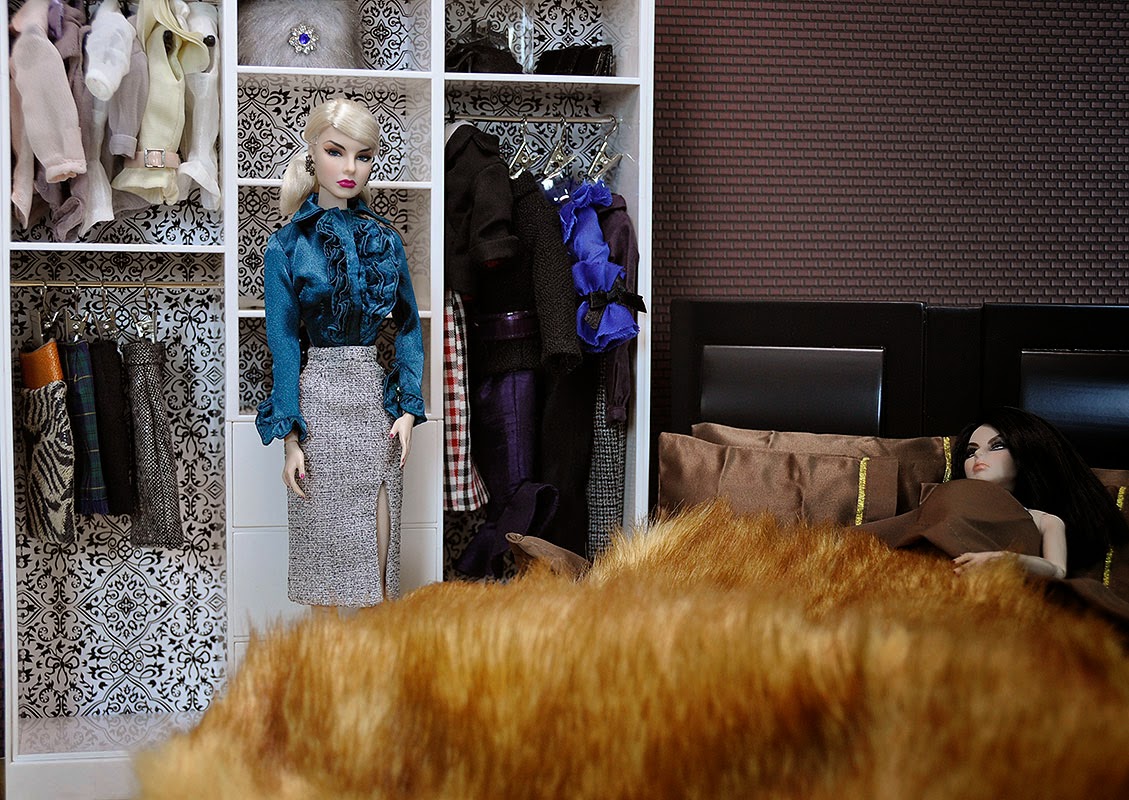 "But I just got here.  I came all the way from Australia.  I need my beauty sleep." 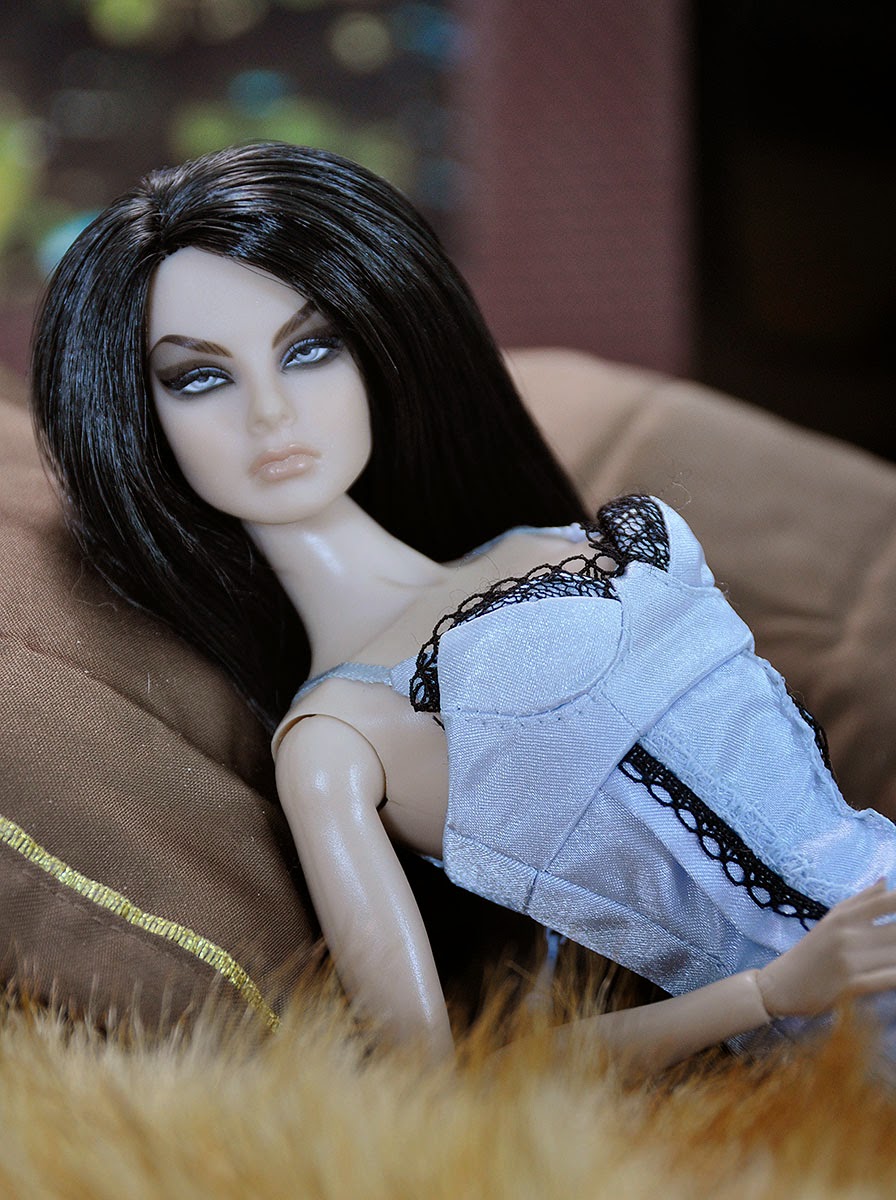 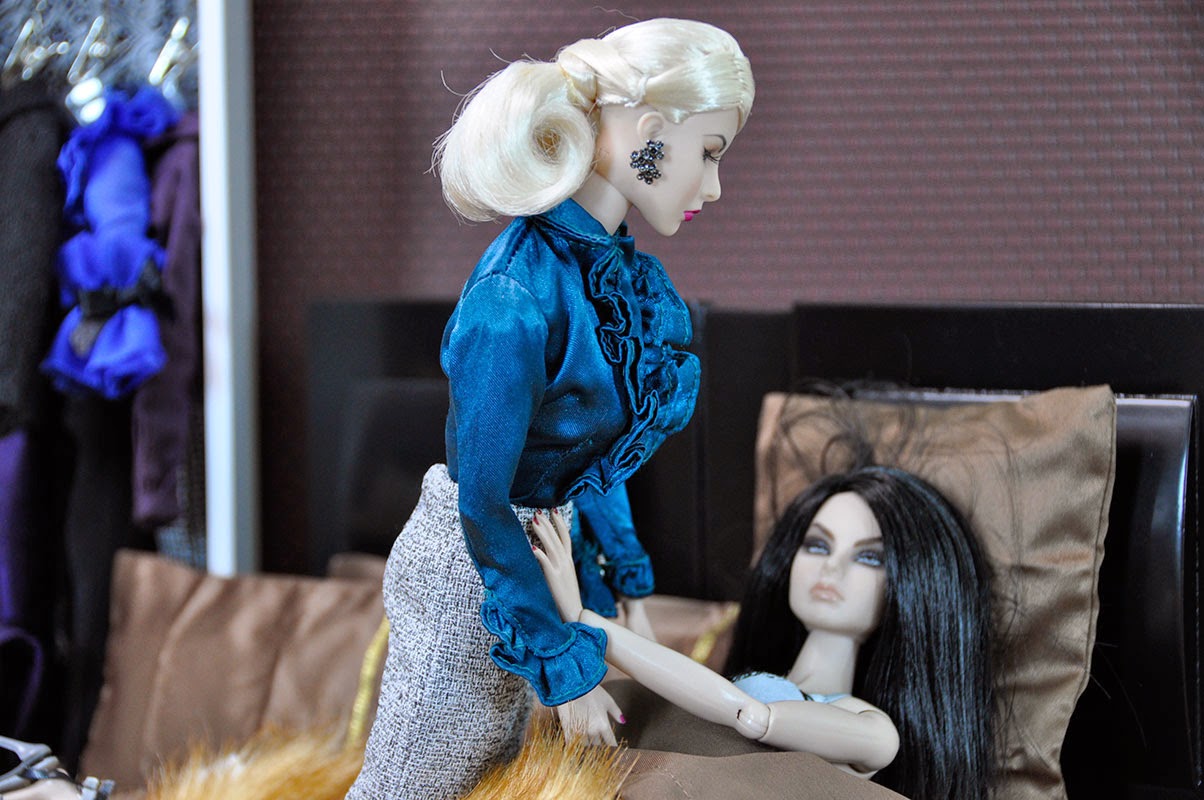 "Just lay down for a minute.  Calm down and see how nice the bed is.  You are simply too stressed."

"I hate to admit it, but you're right!  This is a very nice bed.  Was it here where we arrived?" 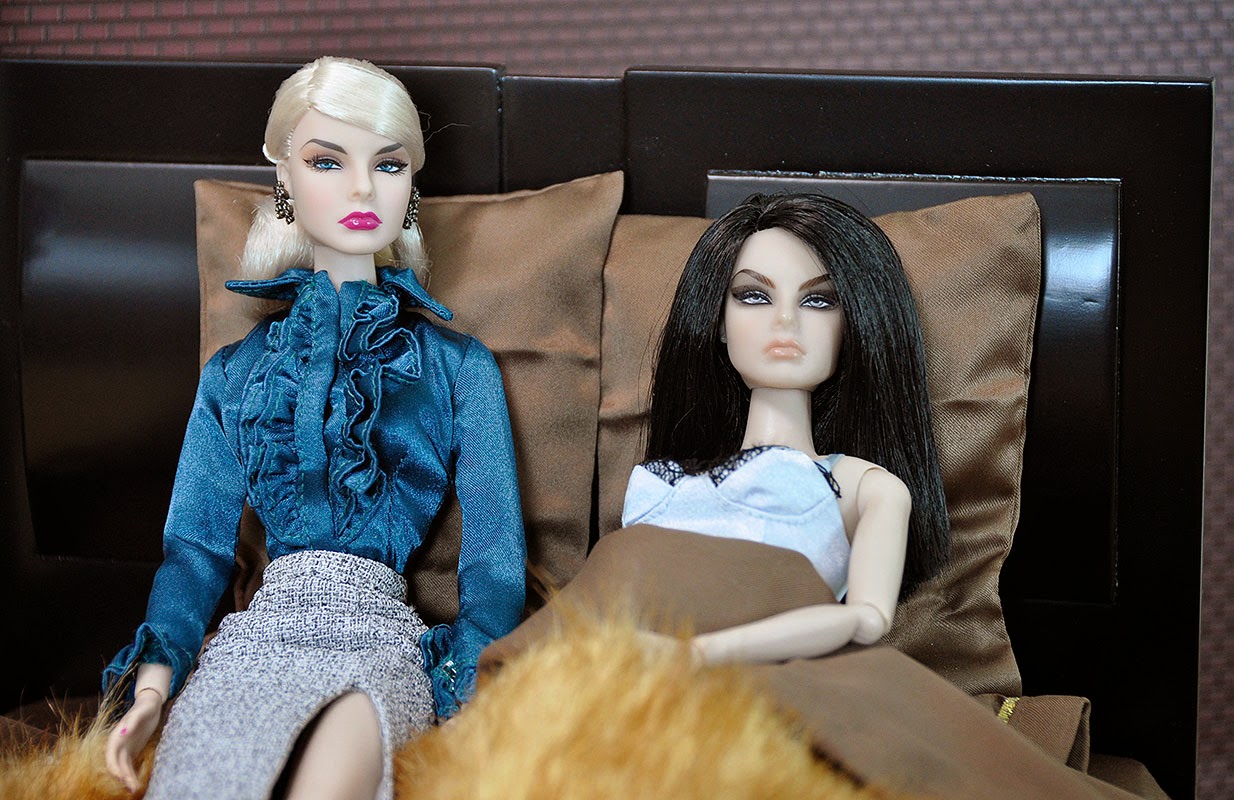 "No.  It arrived yesterday.   Human got it and the bedding for an incredible buy on the new sales website called 'Doll Bid'.  It is called Modern Dreamer Bed and the bedding is called Surreal Comfort.  They are from the 2005 Loft Collection from Integrity Toys.  Human had been looking for this for years and couldn't believe her good fortune in finding it NRFB for a great deal.  There were only 500 of these made!

You should've seen Human fumbling around with the screw driver.  It was hilarious!   But the result is quite extraordinary.  I especially love the fur comforter." 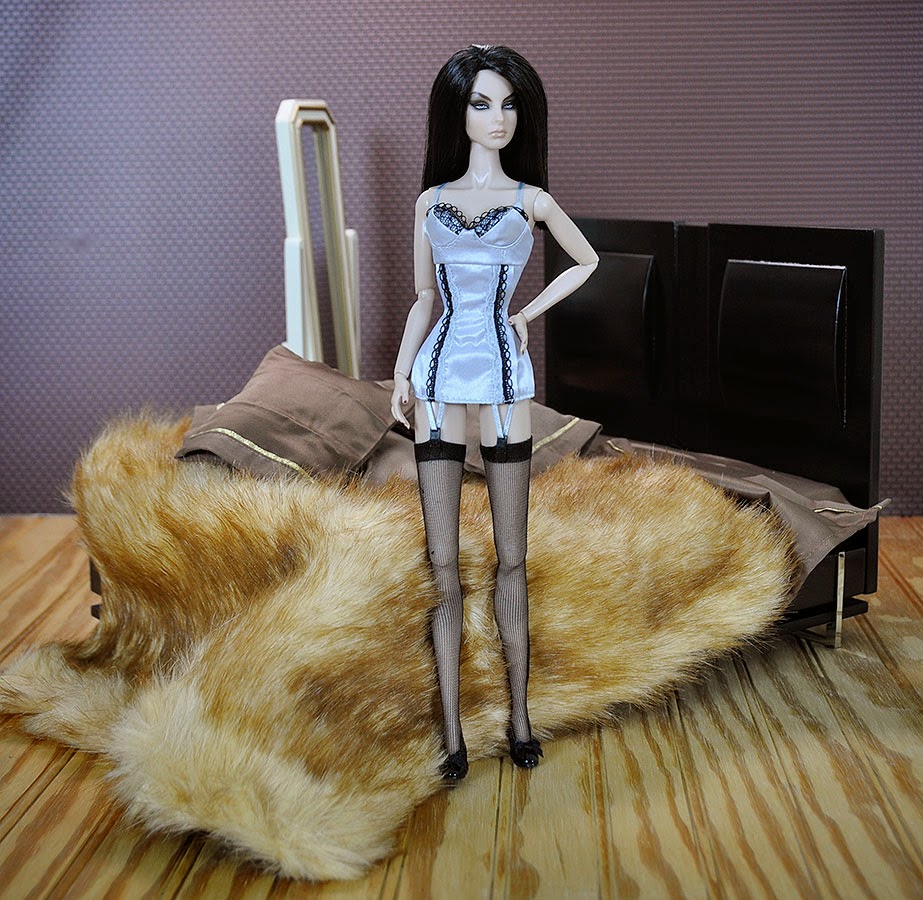 "I think we are going to like it here.  It seems Human has no self-restraint when it comes to our needs!" 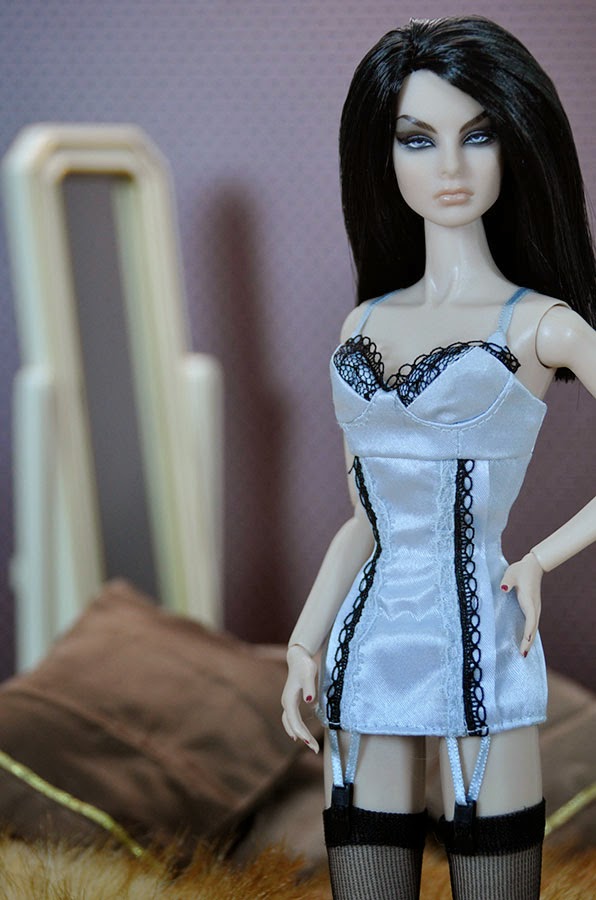 Posted by Desperately Seeking Dolls at 8:19 AM 5 comments:

It has been over a year since NuFace admirers have received a new collection.   With no NuFace dolls on the horizon, I decided to get out my girls and take some photos.  There are other versions of these molds available, but my blog is devoted to only those that are in my collection.

NuFace was introduced in 2006 with two models - Erin Salston and Nadja Rhymes.   Unfortunately, I only have one version of each of these girls in my collection.  They both come from 2007.  The first is Urban Outfitting Nadja: 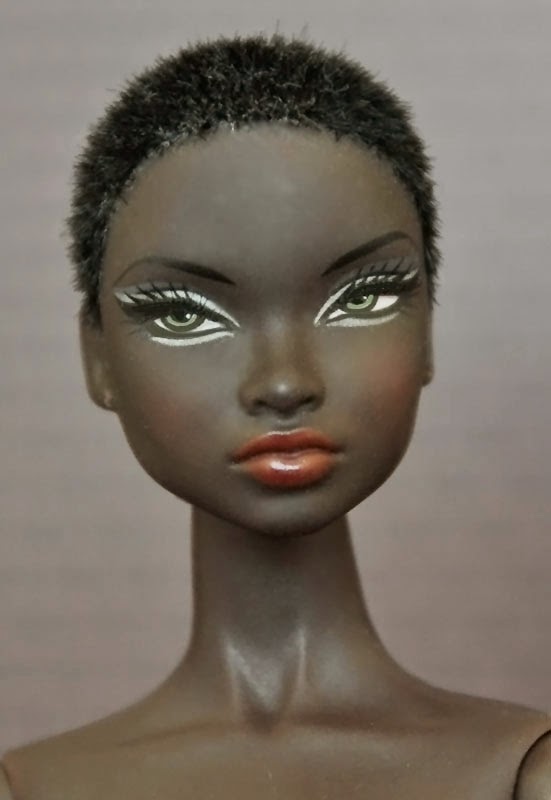 And the second is Making A Scene Erin.  This doll has never been redressed.  I love her in stock. 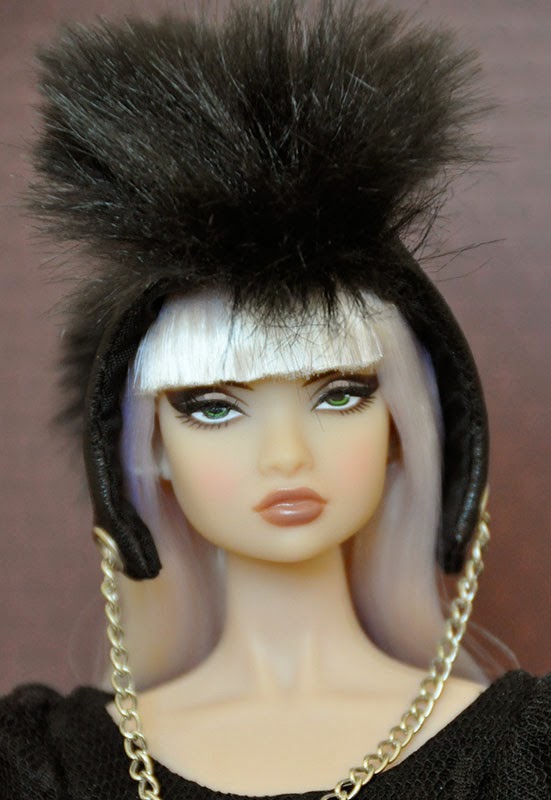 Erin received a makeover in 2012 with a W Club Exclusive called High End Envy (right).  She also showed up at the 2012 Convention as Lady in Red (left).  I really like what they did to this mold. 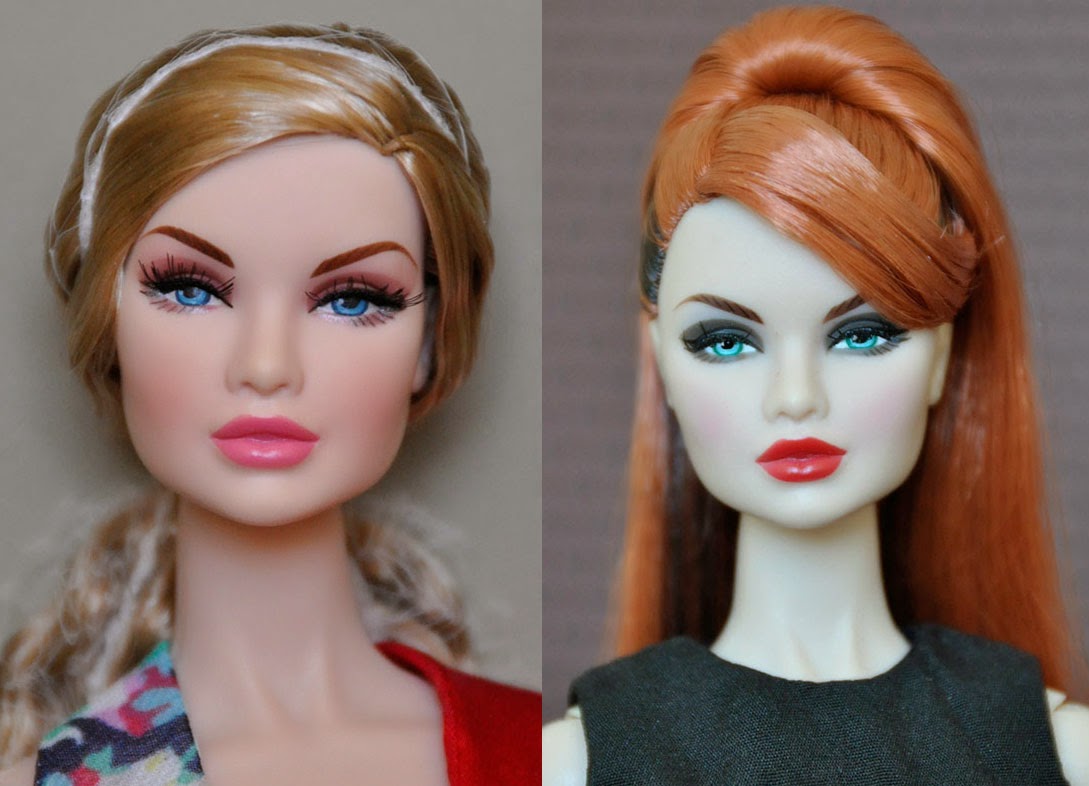 Introduced in 2007 was Colette Duranger.  She came in a gift set with Erin called Painted Black.  I instantly fell in love with this hazel-eyed doll.  She was my entry in Pink Parlor's Next Top Doll Model.  I named her KiKi.  She has been re-bodied and will always hold a special place in my collection.  She is on the far left (and reminds me of Shakira).  The Colette in the middle is from 2010 and is called Perk.  Collectors often remark that she looks Native American.  The doll on the right is All White Now and was a 2012 Convention Exclusive.

Two other characters released in 2007 were Ayumi Nakamura - I only have the 2008 version of this mold London By Night: 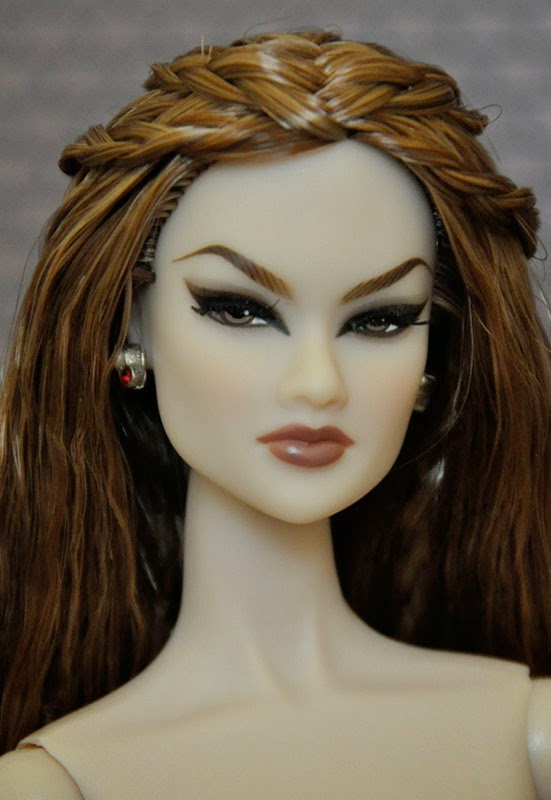 And Giselle Diefendorf as Costume Drama (top left).  Giselle is a very popular mold.   Masterpiece Theater (top right) showed up at the 2008 Convention.  She is my favorite strawberry blonde.  She was the actual Convention Doll for 2010 as Dark Romance (bottom left).   The final Giselle in my collection is from 2012 and is Glam Addict (bottom right).  I have owned other Giselles, but, in an attempt to manage my collection, they have gone to other homes.  These four would be difficult to let go. 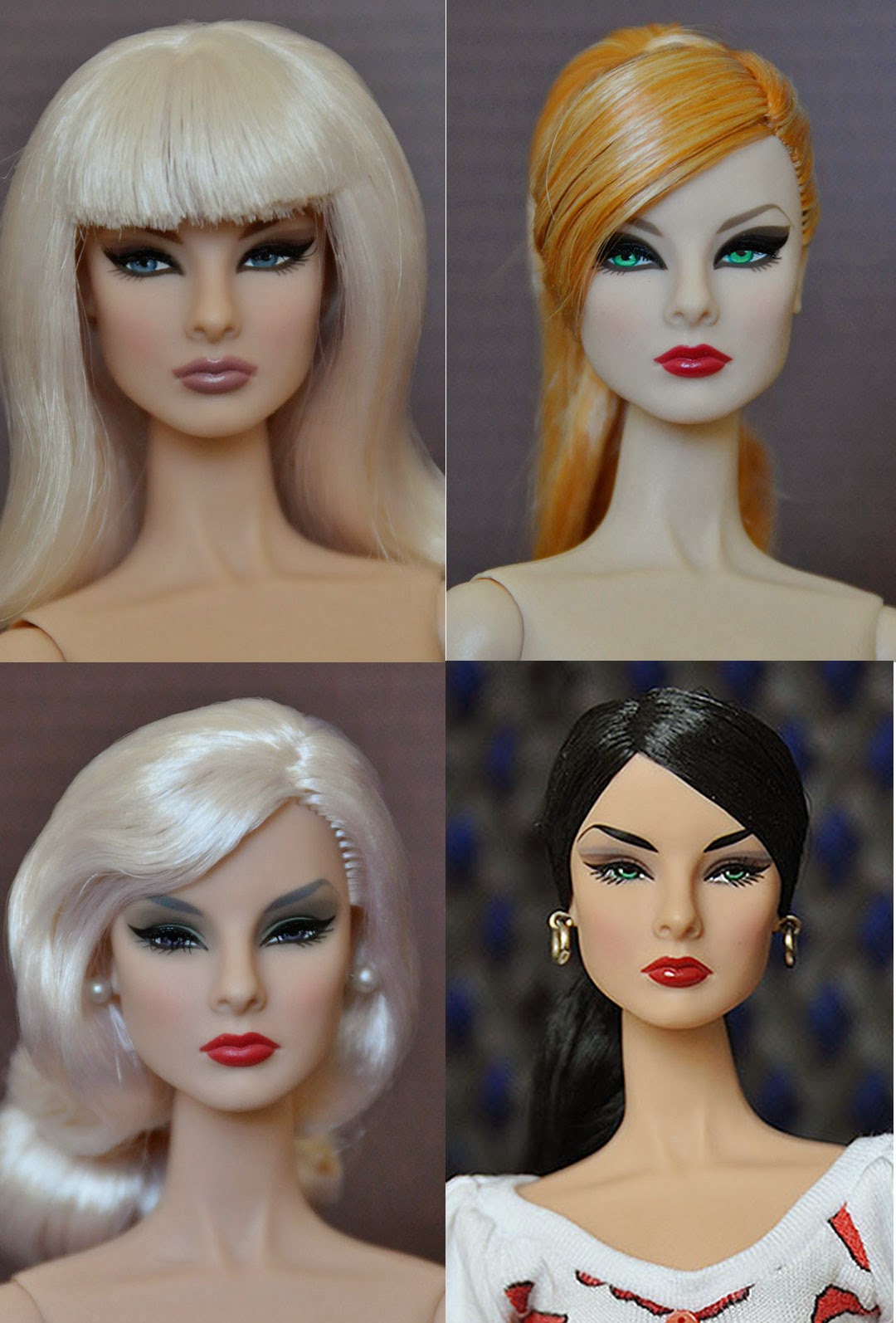 In 2008, Integrity Toys wowed us with our first set of twins - two dolls that share the same mold but have separate characters.   Some collectors feel like they have to keep "sets" in their collection of Lilith and Eden.  Somehow I wound up with three Lilith (2010 Great Pretender top left, 2011 Rocking Ever After top right, and 2013 Hard Metal bottom left) and only one Eden (2012 Sweet Nothings Gretel).   Because Great Pretender looks more like Eden, I don't obsess too much over it. 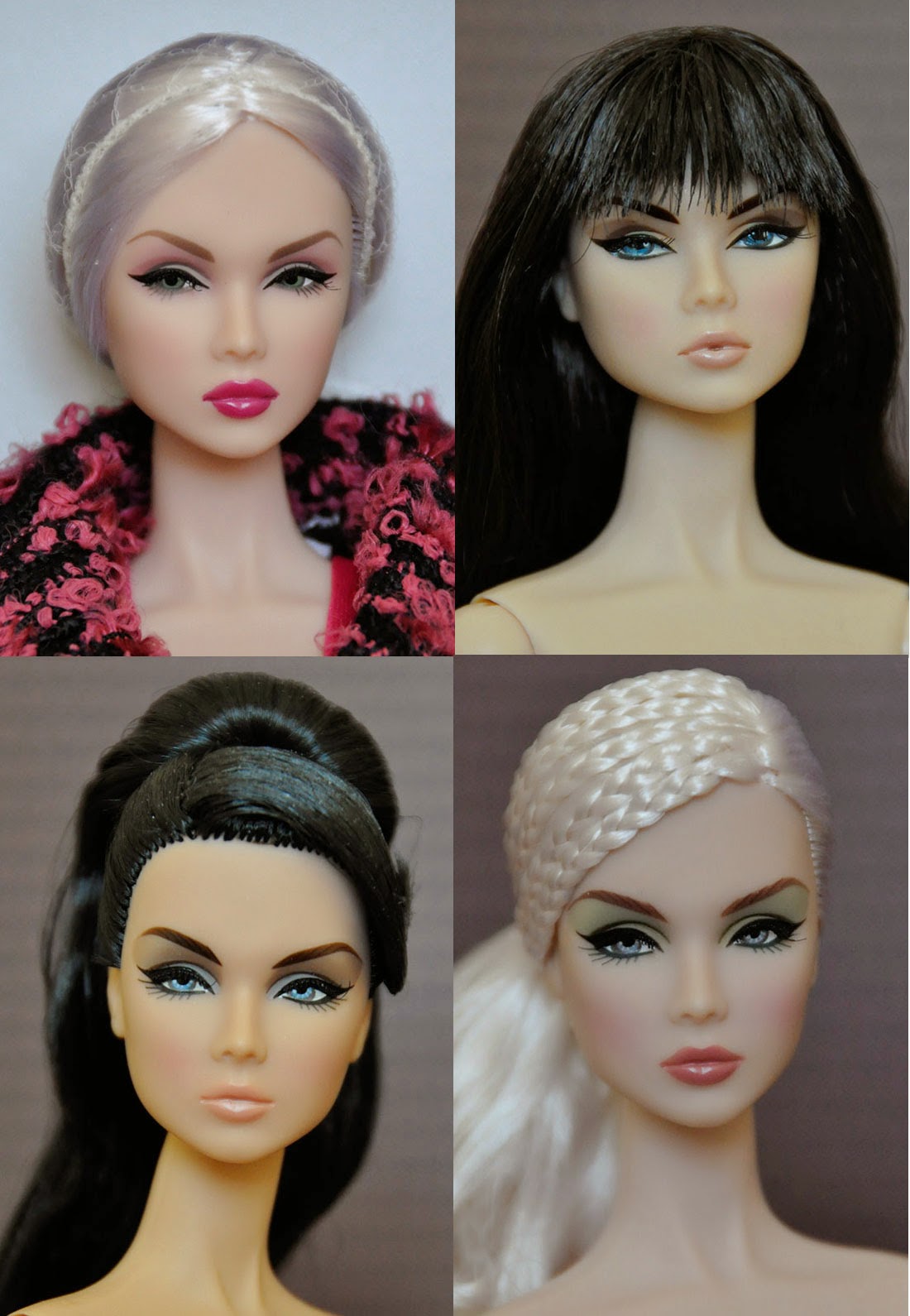 In 2009, another new character, Dominque Makeda, was introduced.  She moved on to become part of the FR2 line.  The 2009 Evening Glow was the only NuFace version ever produced.  Although Vaughn used her mold for his pale caucasian workshop doll that is fondly referred to as Lady Gaga.

Three new characters were released in 2011.  I do not own any version of Annik.  Her secondary market price prevents me from adding her to my collection.  I hope we see a good version this year.  I am fortunate to own all three versions of Rayna.  At the Fashion Royalty Convention we got High Toned (far left) who looks fantastic with her hair taken down.  She showed up at the IFDC as Go Home Dorothy (middle), and again at the 2012 IFDC as Rock Me Baby (far right).  I have placed Rock Me Baby on a FR2 body.  For some reason, Rock Me Baby looks more mature than the other NuFace dolls in my collection.

The last character of 2011 was Imogen.  I own Mission Control which was a 2011 Convention doll (left) and the 2012 Convention doll Fame by Frame (right) which is one of my very favorite dolls. 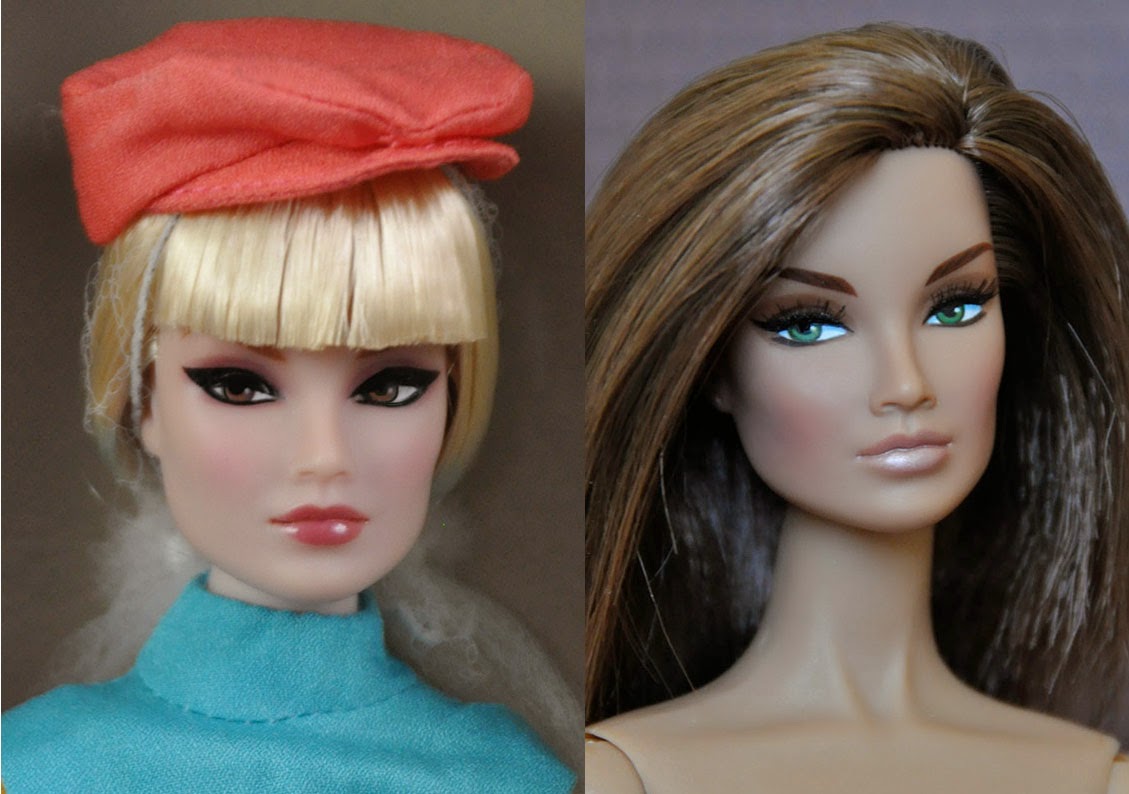 There are some very beautiful NuFace molds.  I always thought of them as the "models" for the Integrity story lines.  The Fashion Royalty dolls were the executives and the "professional working women" while these girls were the ones in front of the cameras.  I am eager to see what Integrity gives us this year!

The Meaning of the Universe

If you think I have the answer, you're in for a big surprise this time!

As I await the next Integrity Reveal, I can't help but feel anxious.  The original intent of this blog was to help me with the emotions surrounding the loss of my mother, while giving me purpose to organize my doll collection.  That was over three years ago.  I still miss my mother every day, and I don't feel any closer to getting my collection under control!  What's up with that?

It just seems that as many dolls (or even more) show up at my door as leave.  I've tried several different strategies.  The only one left would be staying off the internet and e-bay.  Seeing so many beautifully styled dolls really makes me want to add dolls to my collection that I hadn't even considered in the past.    "Ain't nobody got time for dat!"

What's a girl to do?  I sat down and created an Animoto of my Fashion Royalty/FR2 dolls.  I ran out of room at 129 in the video!  There were still about a dozen to include!   That's not counting the Silkstones, Poppies, NuFace, Victoires, or Monograms.  We're talking JUST FR/FR2 dolls.  MOAN!

So, here is the link.    I'm sorry if it takes a while to load.  While you are waiting, here is a lovely photo of a visitor to our blueberry bushes this afternoon. 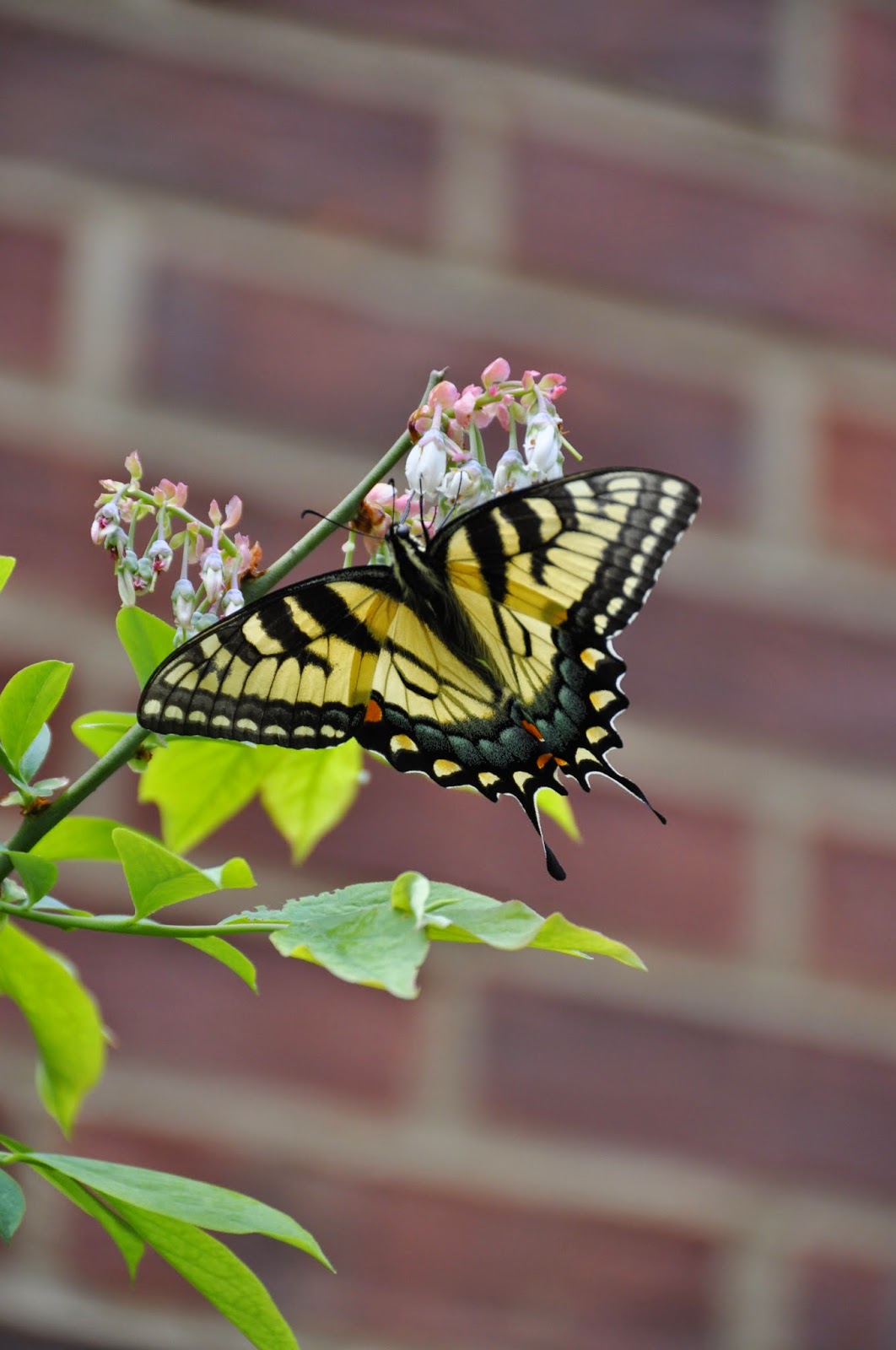 You can't watch the video full screen because I was too cheap to pay for an upgrade on Animoto.  Sorry!