When looking through my flickr page, it's easy to spot my favorite molds.  They have been repeated quite a bit during this summer countdown.   The focus of my blog today is another mold that has not been refreshed.   She is probably my second favorite mold and has never been included in the regular Fashion Royalty lineup.  Collectors have never been able to purchase this doll from a dealer - they are only offered directly through Integrity Toys as "event dolls".   I have owned every version of this doll except one - the ever elusive Saks 5th Avenue Agnes Von Weiss given to 100 guests at Jason Wu's Saks fashion show.  Saks Agnes has caused me more angst than any other.   Fortunately, I have several beautiful versions to help keep my mind off her.

That includes Regal Estate Agnes Von Weiss who was released in 2010 with an edition size of 300.  She cost $209 (Australian).

Since her introduction in 2006, Agnes Von Weiss has been released in 18 Fashion Royalty versions and 3 FR2 versions.  Regal Estate Agnes Von Weiss is one of the twelve Agnes dolls living here.    I have sold five versions since last year and still have three NRFB:  Optic Verve, Poesie Enchante, and Silver Zinger.  I rely on Regal Estate and her sisters to console me over never owning Saks 5th Avenue.   - "What do you need her for?  Look at me?  She pales in comparison?" 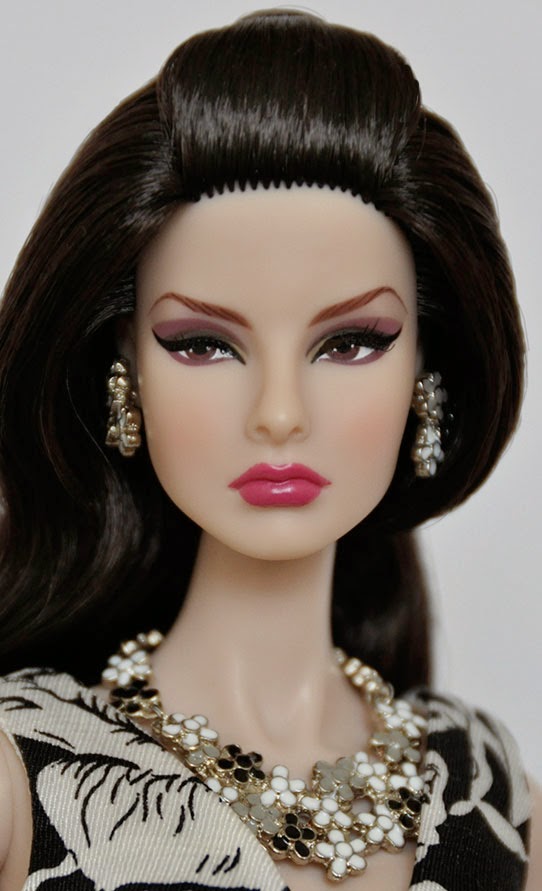 Posted by Desperately Seeking Dolls at 4:08 AM No comments:

I can say something about the next Fashion Royalty character that I can't say about any other.  At one time or another, I have actually owned every version of this character.   Her mold has never been changed, and I hope it never is.  She is my favorite of all molds.  She was introduced in 2007 and there have been 22 releases of her (19 FR and 3 FR2).   Of the 22 releases, 17 still live here (I am including the Urban Safari doll due out soon).   For me personally, the most difficult to get was High Drama Eugenia Frost.  She was a centerpiece doll from the 2007 Integrity Convention.  There were only 150 in her edition and she cost $150.

It would be near impossible for me to choose a favorite of this mold.  I have already included five other versions in my 60 day countdown.  High Drama Eugenia Frost continues to be very sought after by collectors and remains in the top of my favorites. 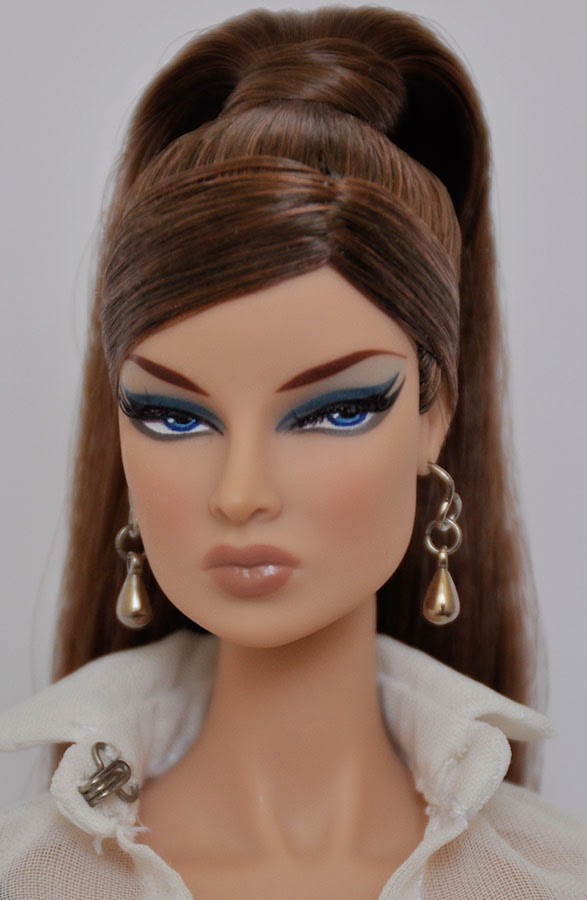 I can't believe I am down to single digits.  It is so depressing that I decided to complete my spotlight today on a doll that always makes me smile.  In my last blog entry, I wrote about Adele 2.0 and how she is one of my favorite molds.  Adele was one of the first two characters introduced by Integrity Toys in 2001-2002.  Personally, I prefer her refreshed mold that was in production 2004-2011.  Adele is one of two molds that have three versions.  The other is Veronique Perrin's sister, Vanessa.

Vanessa Perrin was introduced in 2004 and mold 1.0 is easily my favorite.  I remember seeing collector's photos of the next doll after I missed the opportunity of purchasing her and feeling so sad about it.   Her secondary market prices skyrocketed and she still demands one of the highest prices in the Fashion Royalty collecting community.  You can not imagine my delight in snagging her on E-bay, nude for $120.   The seller collected wedding gowns for her Silkstones and didn't want the doll!  I finally added Poesie Sans Couleur Vanessa Perrin to my collection.

Poesie Sans Couleur Vanessa Perrin was a Fashion Doll Quarterly exclusive in 2005.  Her edition size was 500 and she cost $189.  2005 was definitely the year that Vanessa proved she was "no one's little sister".   That year we got the Fashionable Life twins, Poesie Sans Couleur, Runway Right Away, and Intoxicating Mix.  2005 established Vanessa Perrin a strong fan base that is one of the most outspoken in the collecting community.  To say the least, Integrity Toys has had great difficulty changing this character's mold.

Of the 26 mold 1.0 releases, I have owned 20 of them and 11 still reside here.  I own all three of the mold 2.0 releases, and all four of the mold 3.0 releases.    But the one who makes me smile because I nabbed her for $120 on e-bay will always be Poesie Sans Couleur Vanessa Perrin. 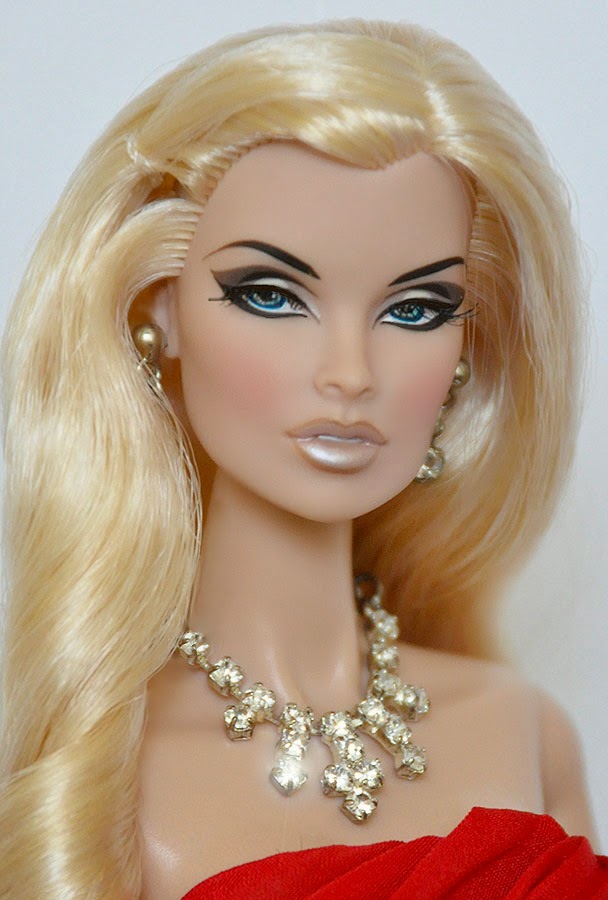 During the past 51 days I've tried to be careful about "balancing" my spotlights.  I've covered at least one of each mold produced as Fashion Royalty dolls.   I appreciate the diversity of a collection.  It is unfortunate that there aren't more ethnic dolls in the Integrity World.

Integrity introduced the FR2 line at their convention in 2010.   The first release to the collecting community was in 2011.   Being a new line, I was hesitant.  I wanted to give it a good chance, yet start slow.  I purchased two of the ensembles that year.  One was Metropolitan.  It had an edition size of 300 and cost $100.   It took me forever to find a doll that could wear this ensemble.   I wound up using the cummerbund belt from a different outfit to make the fashion fit properly.   Here is Talking Drama Adele Makeda wearing Metropolitan.

Adele Makeda's 2.0 mold is one of my top dolls to collect.  I have owned fifteen versions of Adele and twelve are still living here (two of Paparazzi Darling).   Talking Drama Adele is a favorite. 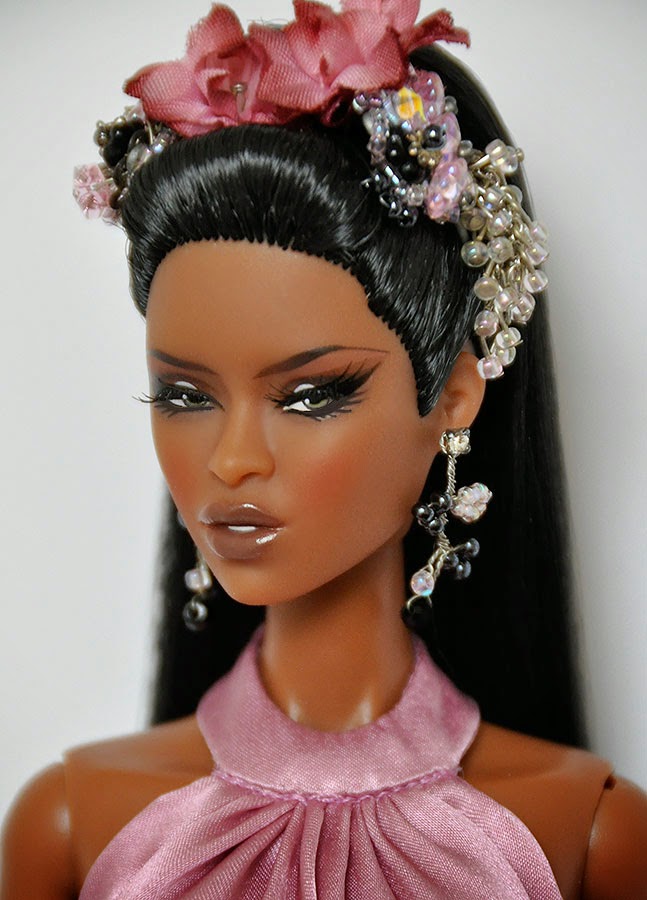 Posted by Desperately Seeking Dolls at 6:44 AM 3 comments:

If you've been collecting for a long period of time, you've probably fallen into the mistake of selling a doll and then buying it again.    I've done this more than once!  I've even gone so far as selling a doll, buying her back, and selling her again!   I blame this behavior on the enablers who post extraordinary photos of dolls.   There have been instances when I've not bonded with a doll, ended up selling her, then seeing her potential through another collector and buying her again.

The topic of today's post is a doll that I purchased when she was released.  I sold her last year when I was reducing numbers, reasoning that I already had another doll who favored her.  Dressing The Part Agnes Von Weiss is one of my favorite dolls.  She was the subject of an earlier post.   This year I was able to add a Holy Grail doll, Poesie Enchante Agnes who is still NRFB.  Even though I own both of these dolls and they are similar, I decided I needed to bring back Head for Glamour Agnes.

Although all three dolls have side-swept bangs with an undo, they each bring something unique to my collection.  Head for Glamour Agnes is from the 2010 Integrity Convention, The Dark Romance.  She was released in an edition size of 425 and was part of the convention gift set.  Head for Glamour Agnes saw Adele wearing this Valia ensemble and insisted she take it off immediately upon her arrival.    I guess she plans to stay this time. 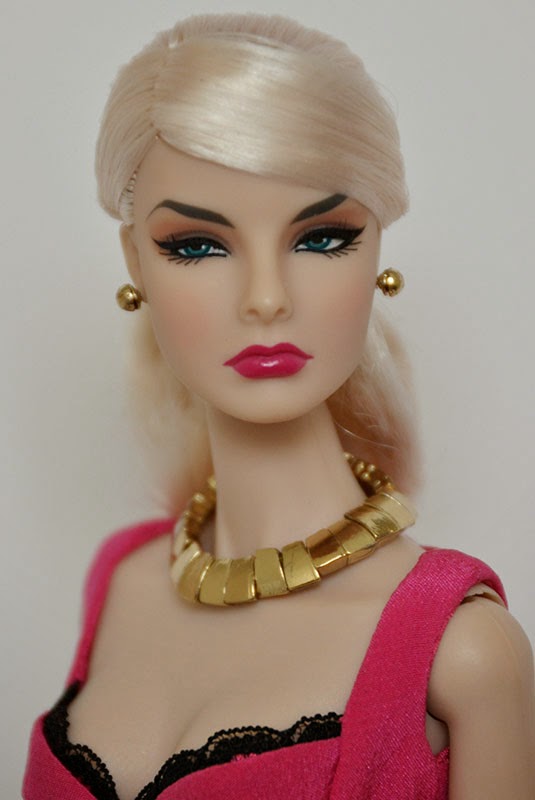 Posted by Desperately Seeking Dolls at 6:33 AM No comments:

This is another doll that I had taken on with the plans of selling and then decided I just couldn't let her go.   Personally, I believe the original Kyori Sato mold 1.0 was very versatile.  Kyori started out in 2004 as an Asian doll with the releases of Urban Geisha and Red Blooded Woman.  Before she moved to the taller body, we got three of my favorites who have already been spotlighted this summer:  Glam Slam/2004, Ginza/2005, and Born to Gamble/2005.  Just like her nemesis Veronique, Kyori Sato was a hit or miss on the taller body.

Although I have owned many versions of Kyori, I seem to prefer her more recent releases as a blonde with A Brighter Side and Quick Silver.  The only other tall version who resides here is her last official FR release No Reservation Kyori Sato.  She was a table centerpiece doll from the 2011 Jet Set Convention.  There were only 150 in her edition and she sold for $150.

I'm not sure why this doll has such a small fan base.  I think she was a beautiful and elegant way for Kyori mold 1.0 to depart.  No Reservation Kyori is wearing the navy dress from the silkstone The Romance Grace Kelly with a OOAK belt.  I added the navy hat from Mattel's Spring in Tokyo and voila! 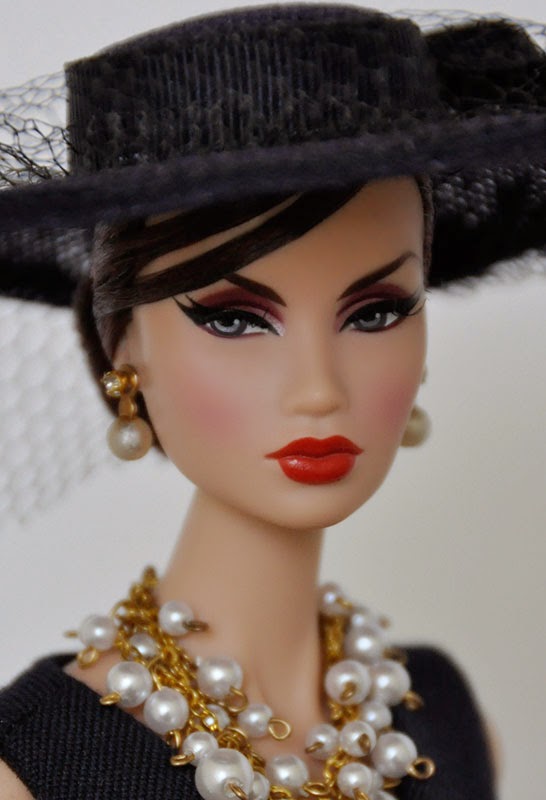 Posted by Desperately Seeking Dolls at 9:06 AM No comments:

After my last post about putting doll heads on different bodies, I looked over my collection and was surprised by just how many dolls I have here that have been changed.   I'm not sure why the Funny Face line of 2013 wasn't more popular.   Not only is the clothing high quality and well tailored, the doll face ups are gorgeous.  In addition to Take The Picture Vanessa 1.0 being on a taller FR handspeak body, I also have A Woman Who Thinks Anja on a taller body.

I have her wearing 2013's Ambitious Kesenia's dress and shoes.   This doll represents the character Dovima from Funny Face, who was a famous model of the time who played a parody of herself in the movie.  I love a doll with a good widow's peak and give me a raven-haired one with red lips and I'm in heaven, especially if that doll has a great short hair cut!  Although this doll was the representation of someone from 1957, she looks just as modern and chic today as any other doll in my collection.    A Woman Who Thinks Anja is one of my very favorite dolls from 2013. 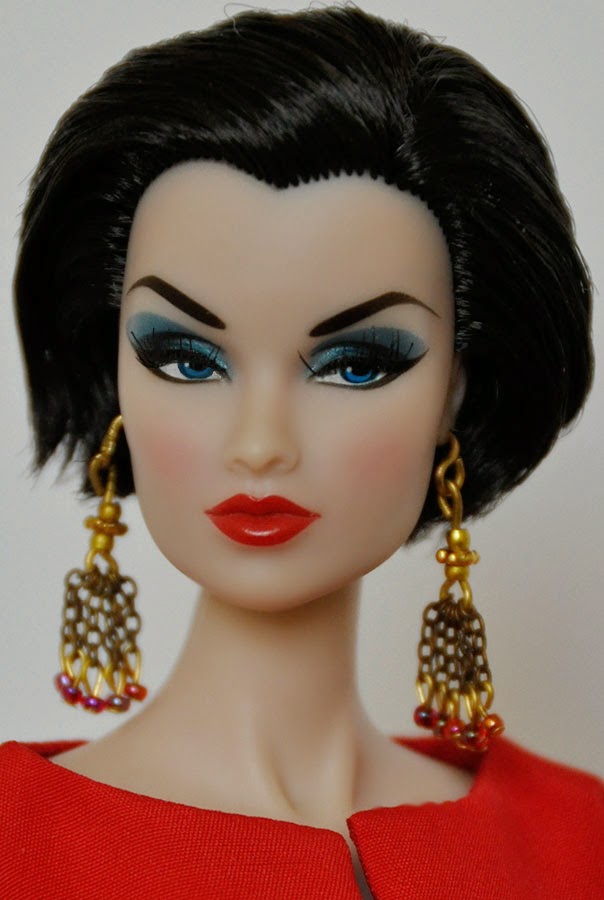 Posted by Desperately Seeking Dolls at 12:17 PM No comments: