There are a handful of dolls in my collection that have never been redressed.  It's not that I don't enjoy the doll; I just find the doll is perfectly presented in stock.  One example of that is Dress Me Luchia Z.  She was an IFDC companion doll of 2007, was released in an edition size of 500, and cost $120.   She and Intimately Acquainted  were companion dolls for the IFDC that year.  It was the introduction of the character Luchia.

I always loved the Lingerie Silkstones, but I believe Integrity Toys "threw down a gauntlet" on lingerie with Dress Me Luchia. She has the most innocent and serene expression and is wearing the most exquisite pale pink lingerie set! One of the best total presentations of any Fashion Royalty doll ever produced, in my opinion. 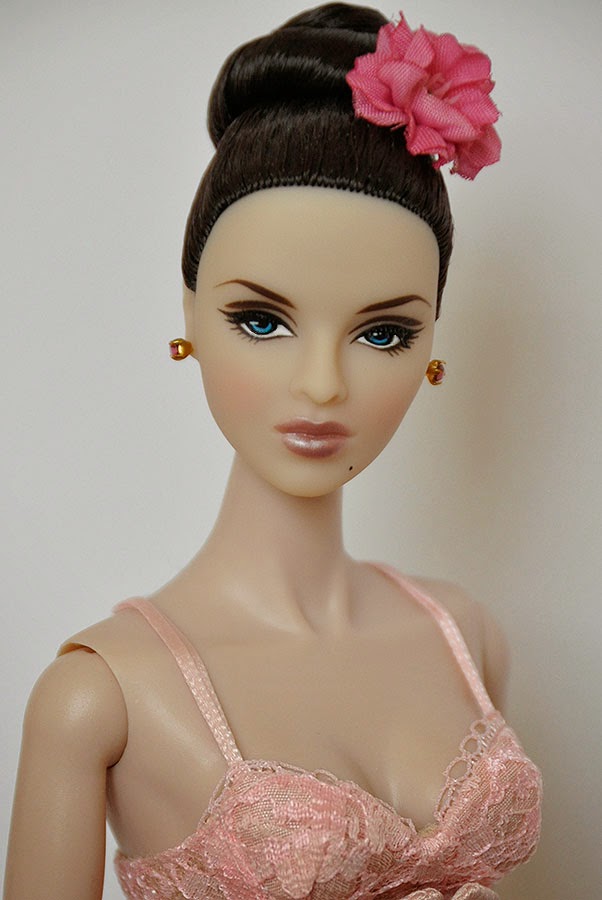 Posted by Desperately Seeking Dolls at 6:30 AM No comments:

There is a funny story about this doll and it starts with a previous blog entry for Shake It Up Korinne.  Korinne was produced on a Victoire (Brides of Dracula/BOD) body.  The BOD bodies have shorter legs, a Monogram torso, and large torpedo boobs.   I don't mind this body on Victoire because that's part of her character; however, I don't like the body used for other molds.

Korinne's skintone is called "porcelain".   It is the palest complexion of all FR dolls and only a handful of dolls have been produced using it  The earliest Tatyana Alexandrova dolls and most Kesenia dolls can be found on porcelain bodies.

I had always wanted the ensemble from Follow the Line Kesenia (love those black pencil leg pants, white blouse, and crop jacket!), so I decided to purchase one to steal the body for Korinne and keep the ensemble.  Unfortunately when Follow the Line arrived, I fell in love with her!  Since Integrity is doing "Urban Jungle" as their theme this year, I tried to find something from the closet to fit this theme. 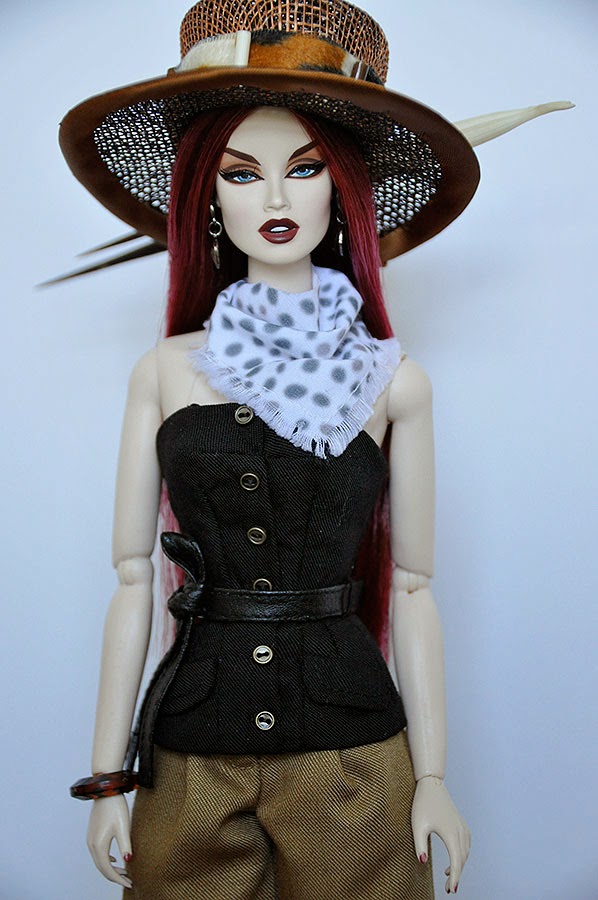 It turns out, Follow the Line wasn't donating her body to any doll, so I had to purchase a second one for Korinne's body.  Fortunately, I was able to sell the second head on Korinne's old BOD body for almost what I paid for the NRFB doll!   Follow the Line cost $129 retail and was released in an edition size of 300.  I think she is phenomenal. 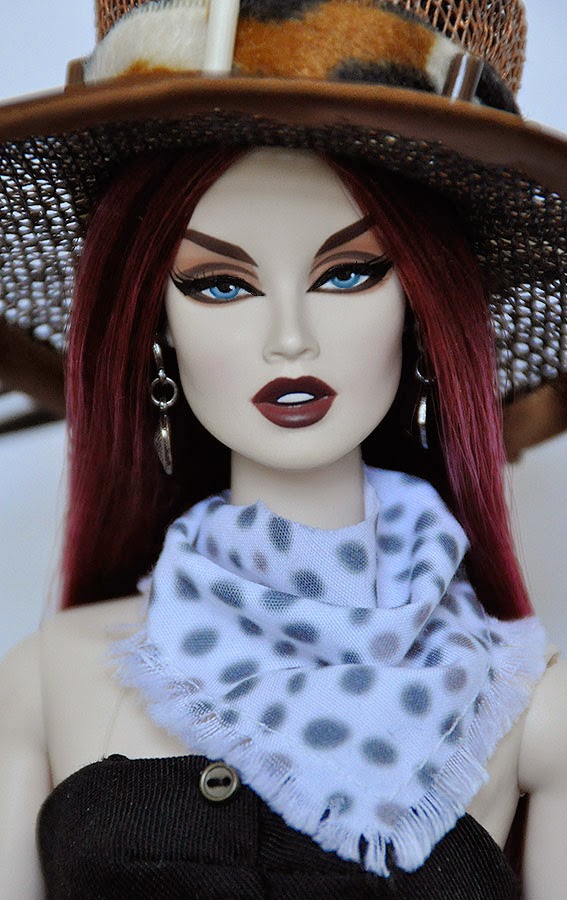 As I plan for my blog entries, I've been surprised by how many molds/characters I have of Fashion Royalty dolls.   I decided to focus only on Fashion Royalty characters, so there won't be NuFace, Hommes, Poppy Parker, or FR2 dolls.  The next doll is a "hybrid" in my collection.  (Although Anja is a Fashion Royalty character, this version of Anja was released on a NuFace body.  I switched her to the regular FR body.)  Celebrating the "little black dress/LBD" is The Entrepreneur Equation Carol Roth. 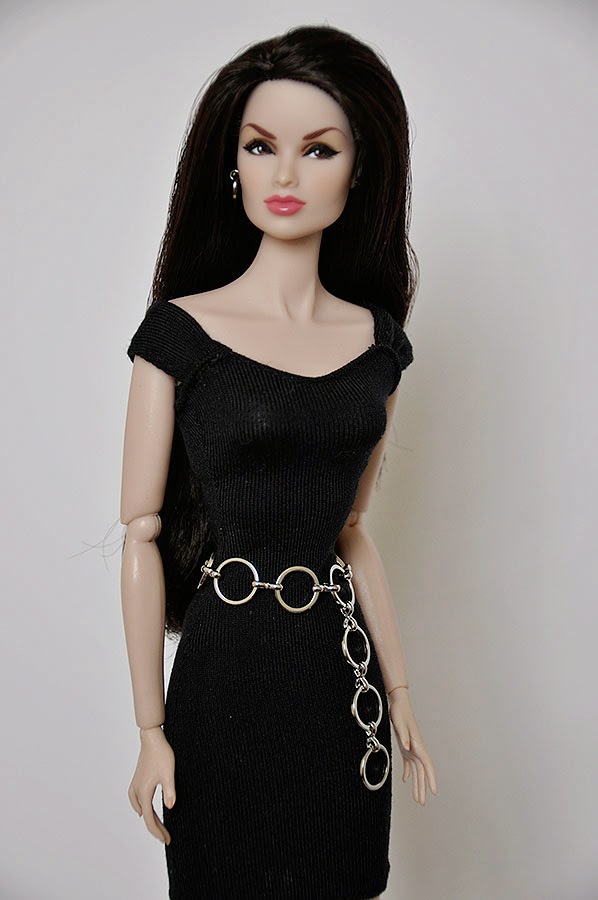 This is my favorite version of the Anja mold.  It was released in 2011 and collectors had to buy six copies of Carol Roth's book to get the doll!  It was an interesting marketing concept which pushed Carol's book right onto the bestseller list.  Although I've still not read the book - it's in the bookcase - I've celebrated this doll with several redress opportunities.  It's a reasonable likeness of Carol and is a great doll for my collection. 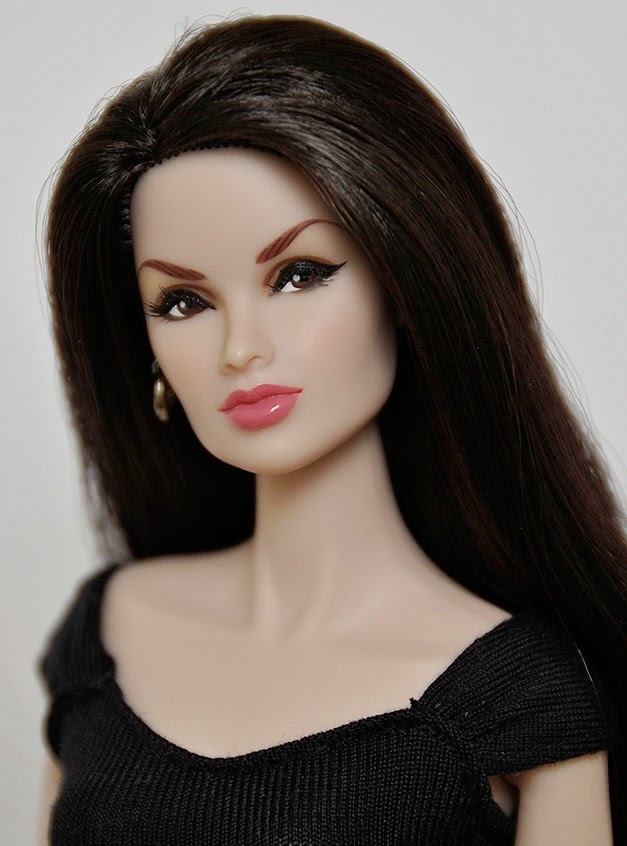 Posted by Desperately Seeking Dolls at 4:08 AM 3 comments:

Sometimes an ensemble photography experience just presents itself.  Since I am trying to choose different molds for as many consecutive days as possible, Agnes was getting pretty upset that she hadn't a turn yet in front of the camera.   I recently deboxed, undressed, and sent Glow Vanessa off to a doll artisan to have her "wonky" eye fixed.

I'm not much of a gown person.  Most of my dolls don't stand around in evening garb.  I prefer casual clothing or career ensembles.  Glow Vanessa was produced with one of the few evening gowns that I actually adore, and Force of Nature Agnes Von Weiss was the perfect model to put it on. 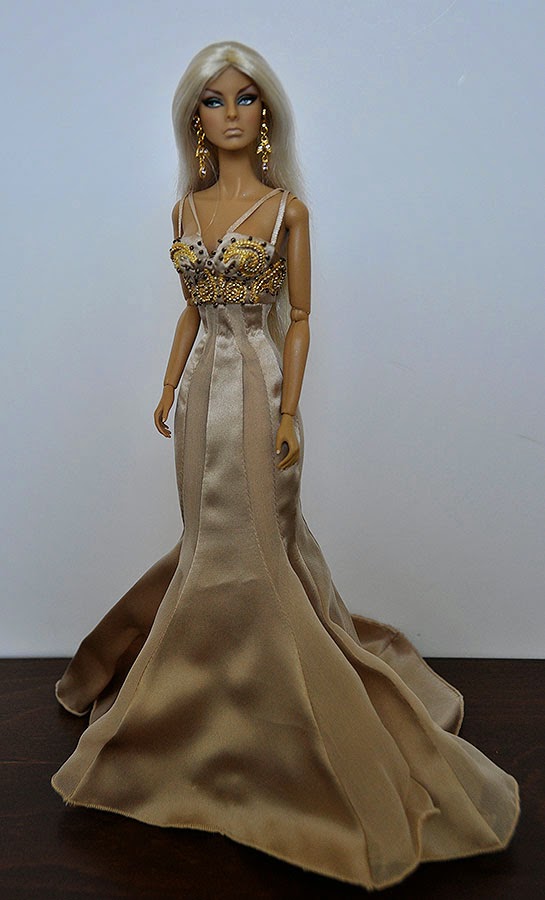 This was the table doll from the opening ceremonies of the 2012 Integrity Toys Tropicalia Convention in Orlando, FL.  My husband's number was drawn and we got to purchase her.   I believe there were only 200 in the edition size and she cost $150.  I remember how everyone entered the banquet room and thought she was Giselle.  Force of Nature is one of the youngest looking Agnes dolls ever and many believe she is off character.  Force of Nature Agnes will always be special to me and I believe she is one of the most under-rated dolls to date. 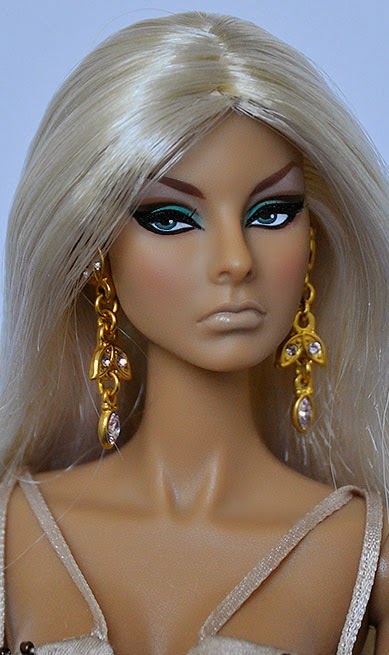 Posted by Desperately Seeking Dolls at 6:22 AM No comments:

I was recently invited to participate in a Flickr Tag Game: Dolls In Denim.  What a great way to initiate a photoshoot!   So, I chose another of my favorite older dolls.  Anytime I want something sensuous in a photo, I usually turn to this doll!  She is from the My Favourite Doll Fashion Royalty Convention - which later got renamed to the first official Jason Wu Event.  She is the very first Fashion Royalty Convention doll and was part of the $199 registration fee.  She was released in an edition size of 300 in 2004.  She is the doll chosen for "Dolls in Denim" and is called Cosmetic Takeover Natalia Fatale. 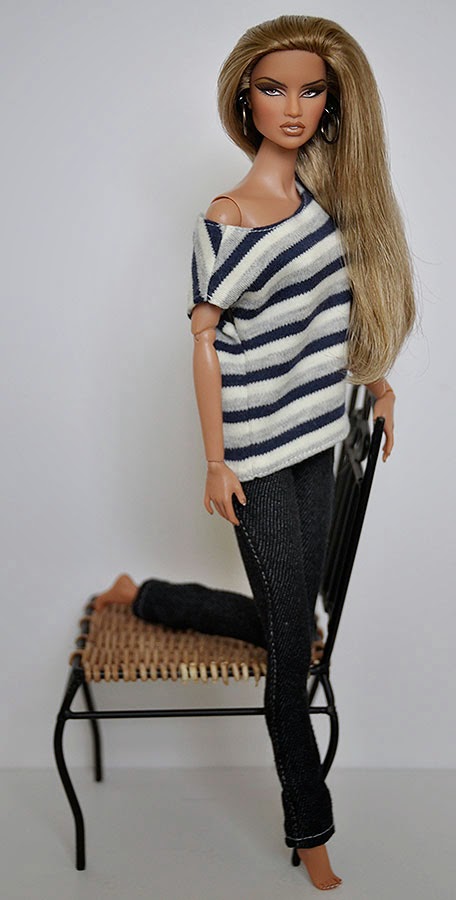 Many collectors have a favorite Natalia, and they are usually from mold 2.0.  This one is easily my very favorite.  She was the very first Natalia, and I still believe the best.  Her mold was revised to 1.5 when the dolls went to taller bodies, then to 2.0 later.  Cosmetic Takeover Natalia is just "sex on a stick" as far as I'm concerned.  It's not easy to take a sweatshirt and blue jeans with a doll and pull this off … 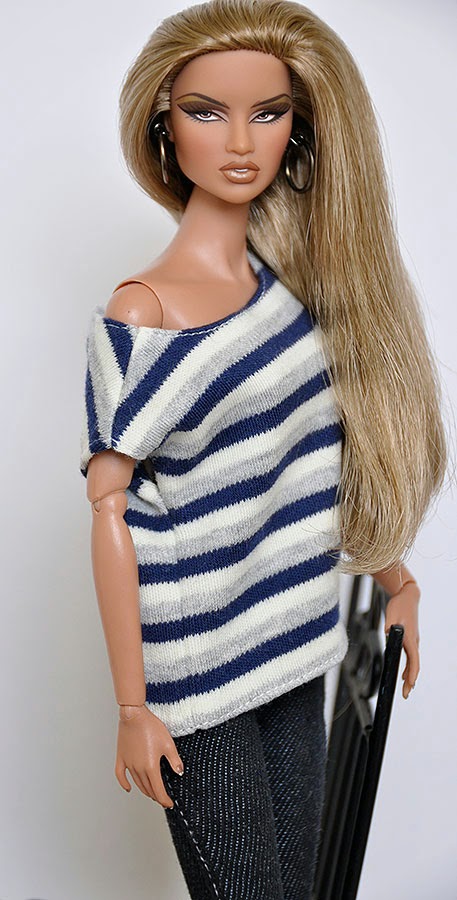 Not to mention that gorgeous face up.  Another older doll that holds a very esteemed place in my collection-  Cosmetic Takeover Natalia. 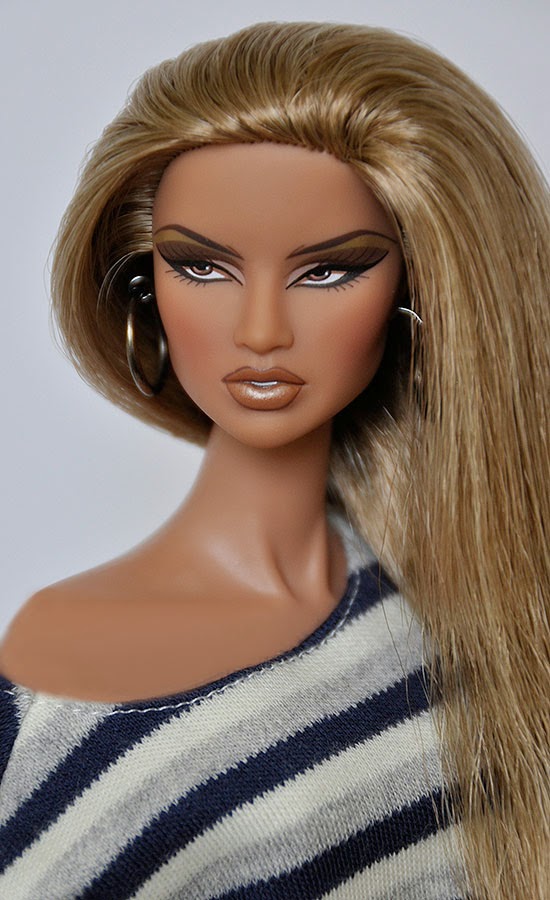 Posted by Desperately Seeking Dolls at 3:52 AM 3 comments:

It's Monday and most adults are off to work again.  Today's doll of choice is one of my favorite dolls with an "updo".   She a convention centerpiece doll from the Jason Wu Event VII, The Dark Romance Collection.  She only had an edition size of 150 and cost $150.  I purchased her nude shortly after the convention.  I am surprised this doll doesn't get more time before the camera.  Smoke Screen Dania Zarr is a big favorite around here.  She definitely looks good in her power suit.

This doll is one of the few that was released with airbrushed eyeshadow instead of the block screening that is most often seen.  Integrity Toys announced the cost of this process was prohibitive, so they discontinued it. 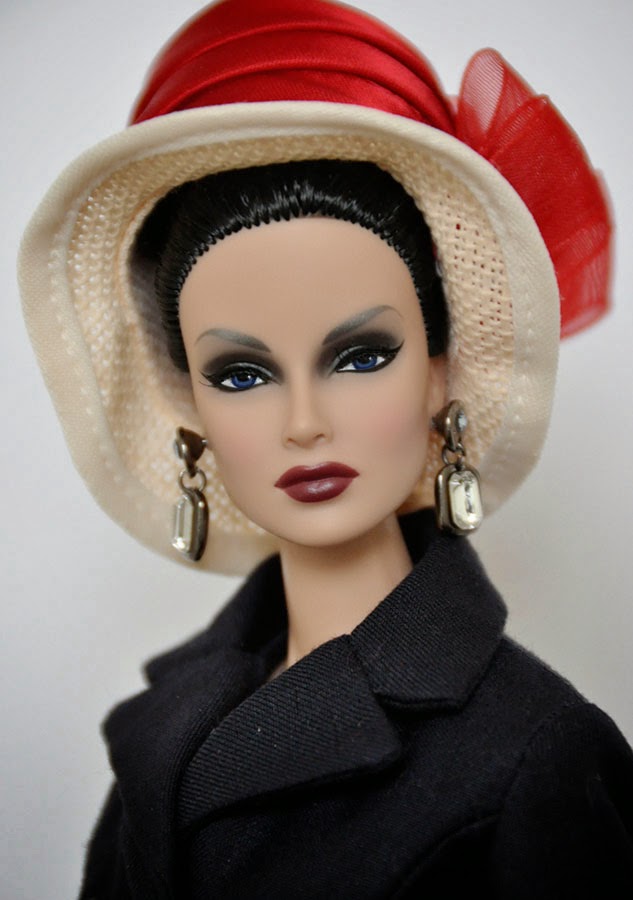 Smoke Screen Dania Zarr - I wouldn't want to come up against her in a board roor. 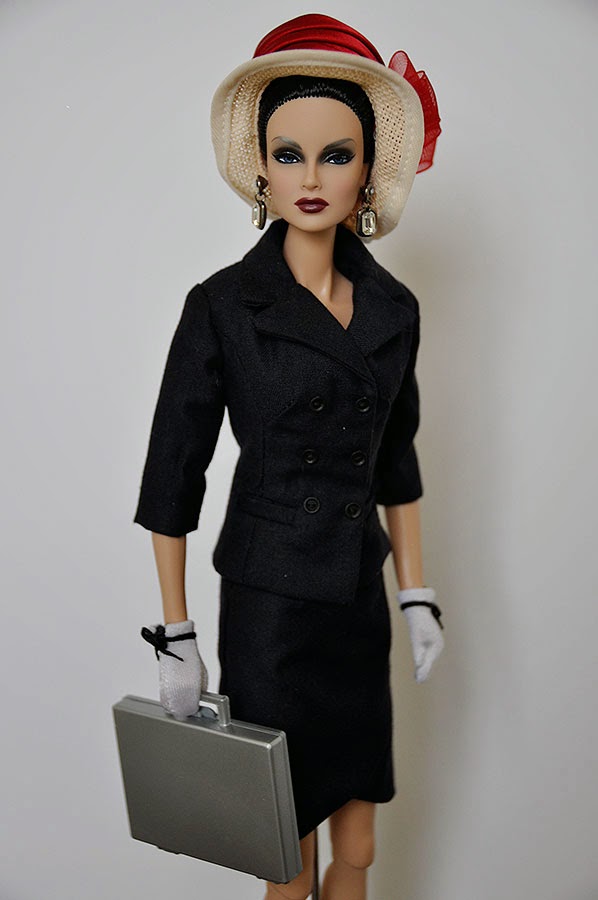 Posted by Desperately Seeking Dolls at 7:17 AM 4 comments:

On Sunday we go to church, so I tried to put together a snazzy little "Sunday-go-to-meeting" ensemble for this entry.  I can see this doll singing from the choir!  She looks like she has a booming voice and can get the congregation on their feet!

I often purchase a doll because she brings something new to my collection.  The doll spotlighted today was originally part of the Jason Wu Event V (Integrity Convention of 2008).  She was limited to an edition size of 400 and cost $100 to Convention attendees and $150 to collectors when the leftover dolls were offered to the W Club following the convention.  I was very fortunate to purchase The Muse Adele Makeda as part of an Integrity "Warehouse Find" several years ago.  I got her for less than retail.   She is one of the most unusual dolls in my collection with her flocked hair and dark skin tone.  She is very difficult to capture in photographs.

She is wearing the blouse and skirt from 2009's Agnes Von Weiss Festive Decadence. 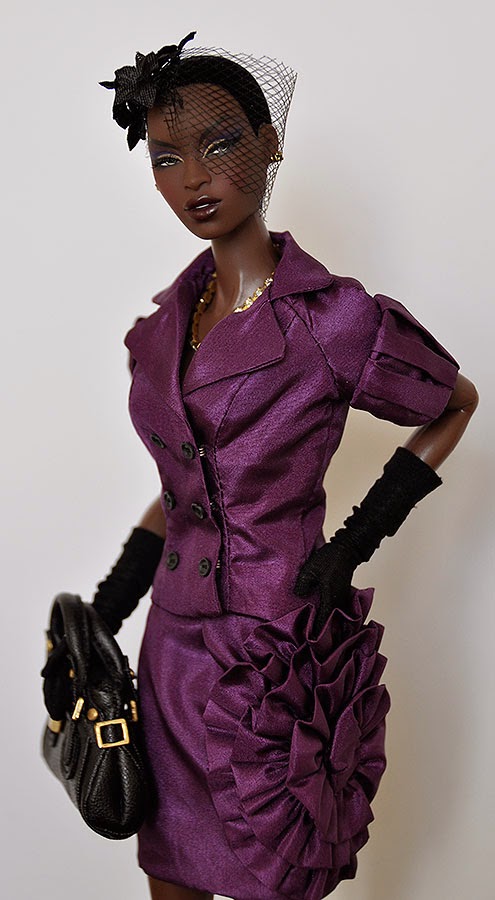 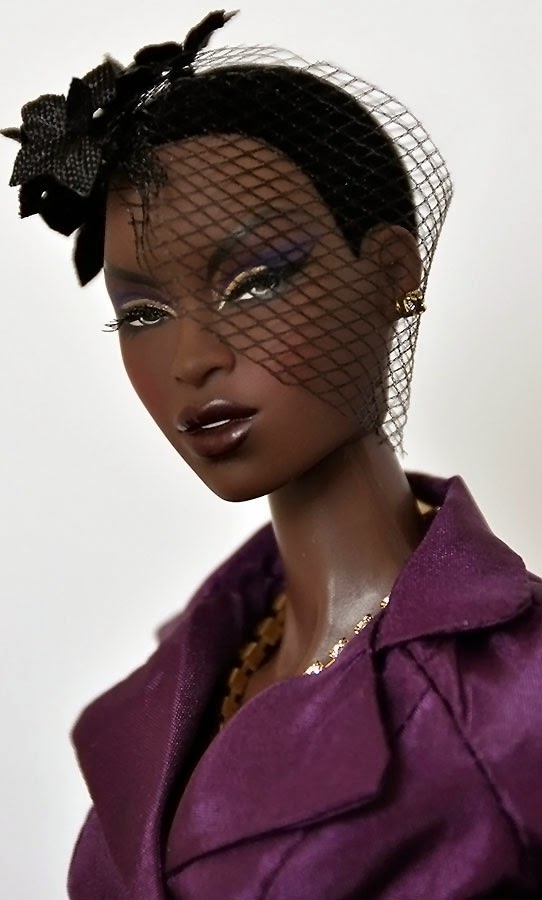 Posted by Desperately Seeking Dolls at 11:15 AM 5 comments: