Convention Review - The View From Outside

As I've mentioned before I was unable to attend the Integrity Toys (IT) 2015 Cinematic Convention although I would've loved to go.   While collectors were flying off to Long Island, our school was giving standardized tests to children.

To kick off the convention in style, IT offered a cocktail reception to early attendees on Wednesday.  Collectors were given an opportunity to purchase an exclusive doll prior to arriving that would be waiting for them upon arrival.   There was quite a scandal about this because two different dolls were offered in an edition size of 210 each.  The problem was that one was much more desirable than the other.  Things got heated when Kumi sold out almost immediately when the link went live. 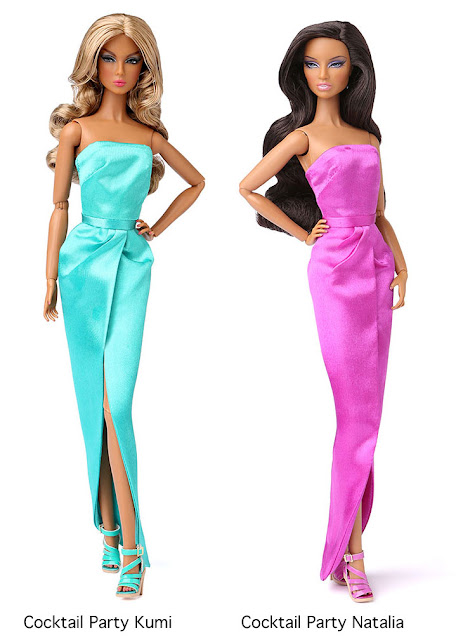 But any convention goer knows that an IT Convention has something for everyone, and there is always more than enough to go around.   Every year, the IT team comes up with workshops during the convention where attendees can purchase tickets.  Usually a doll is included with the workshop registration.  The workshop dolls this year were waiting for attendees in their registration packets upon arrival.  All three were produced in an edition size of 450. 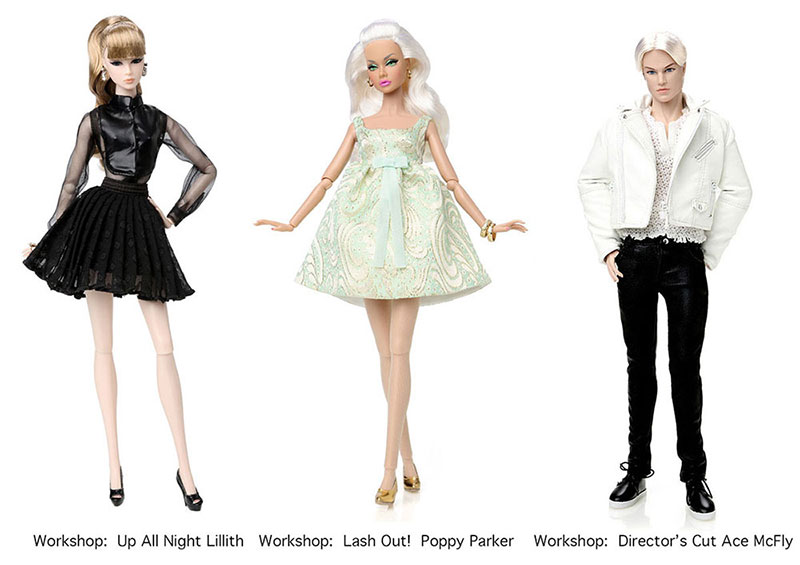 Conventioneers who prepaid for the collection arrived to find those dolls waiting for them also. The Convention Collection this year was very diverse with 7 dolls produced in an edition size of 600 dolls each.  Here are the first three: 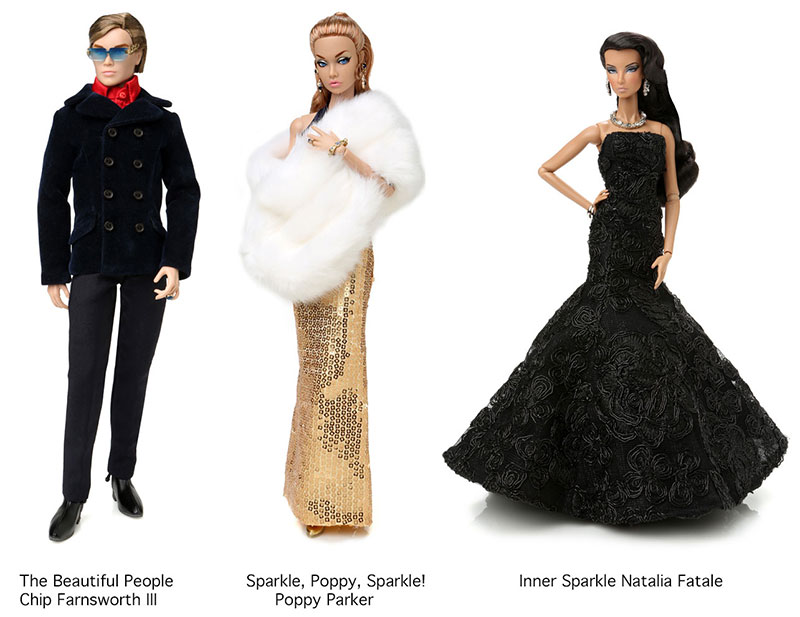 I had been able to pass on all convention dolls up this point.  However, I had to do some serious "rule review" with the next four dolls.   When I consider the purchase of a new doll, I have to ask myself several questions:

The first doll I had to resist was Star Power Vanessa Perrin.  Although I prefer the first two molds of this character, Star Power is exceptional.  The only problem is that there have been several platinum haired Vanessa Perrin dolls produced in the past year.  Although I can appreciate the "Gentlemen Prefer Blondes" Marilyn Monroe ensemble, I thought I might just be able to recreate something similar. 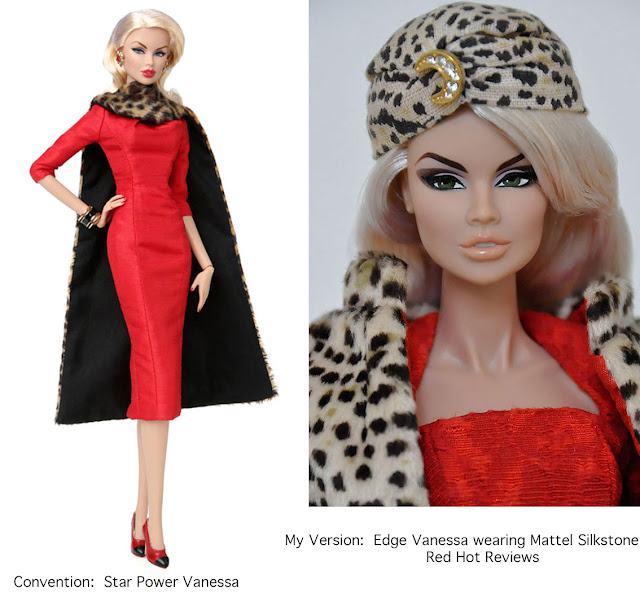 Even though she may not be as stunning as Star Power, I guess I can satisfy that need and avoid paying $250+ on the secondary market for this doll.

Next up, was In Rouges Erin Salton.  I really do love mold 2.0 of Erin.   As much as I was tempted by this doll, High End Envy is a personal favorite in my collection, and I have Voltage on pre-order.   Easy pass - two dolls down, two to go. 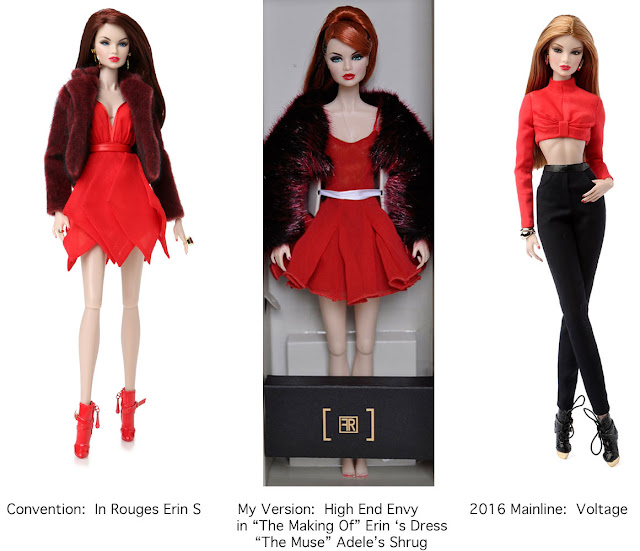 I have had a weakness for Giselle Diefendorfer ever since her original release, Costume Drama, and have owned every version of her at some point.  Although Perfectly Suited gives us a short haired, more mature version of Giselle, I definitely prefer the 2014 Convention Giselle.  I also have the mainline doll on pre-order.  Another easy pass for me. 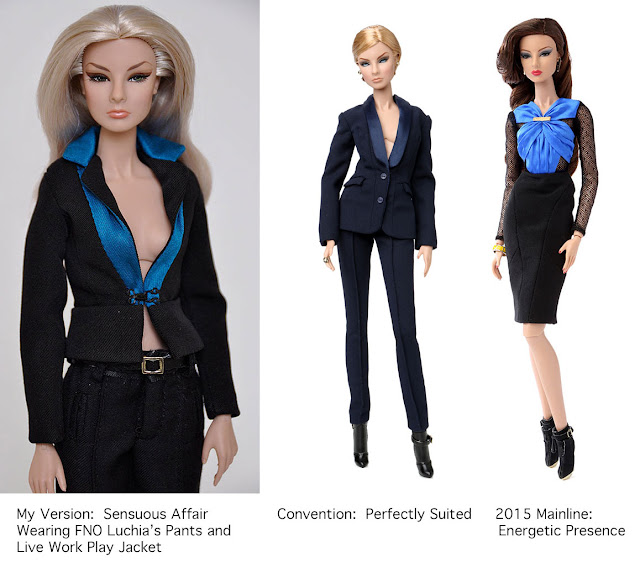 The next doll was one with which I had a real struggle.  Agnes Von Weiss is my second favorite mold being produced by IT.  Feminine Perspective Agnes Von Weiss is an obvious homage to Old Hollywood Marlene Dietrich. The doll was produced wearing gorgeous white lingerie, a white dressing gown, and came with a tuxedo.  Unfortunately, this was very similar to the Josephine Baker gift set "The Jazz Age" which I already own. 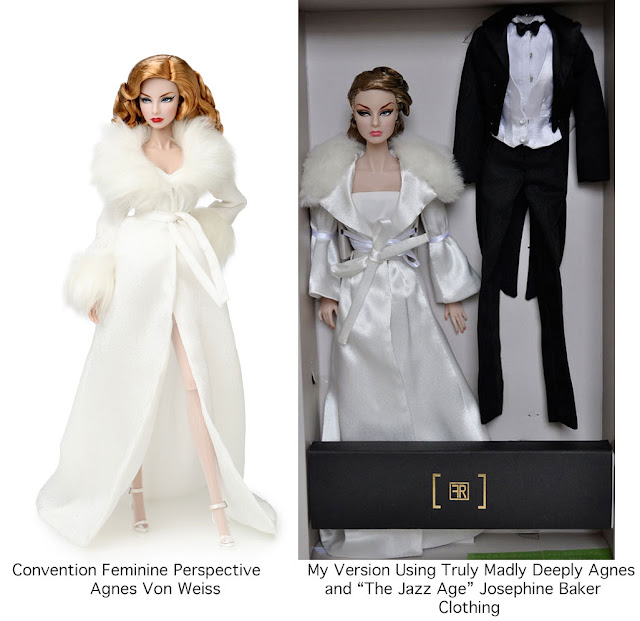 Who exactly is my favorite IT character?  Eugenia Frost, of course, and, for the first time ever, W Club members were given an opportunity to purchase a Convention Exclusive, even if they weren't going to the convention!  She is Reigning Grace Eugenia Frost and was shipped prior to the convention to those who had paid for her.  Personally, I believe she is one of the best dolls from the convention and am very appreciative that IT gave W Club members the opportunity to own her.  She was inspired by Grace Kelly. 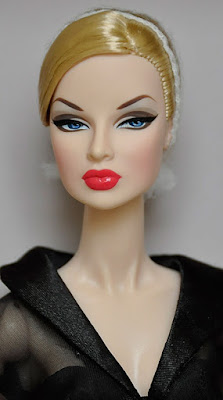 In the registration packets, attendees received tickets to purchase Direct Sales dolls in the salesroom.  There were five.  These dolls are definitely causing me some trouble! 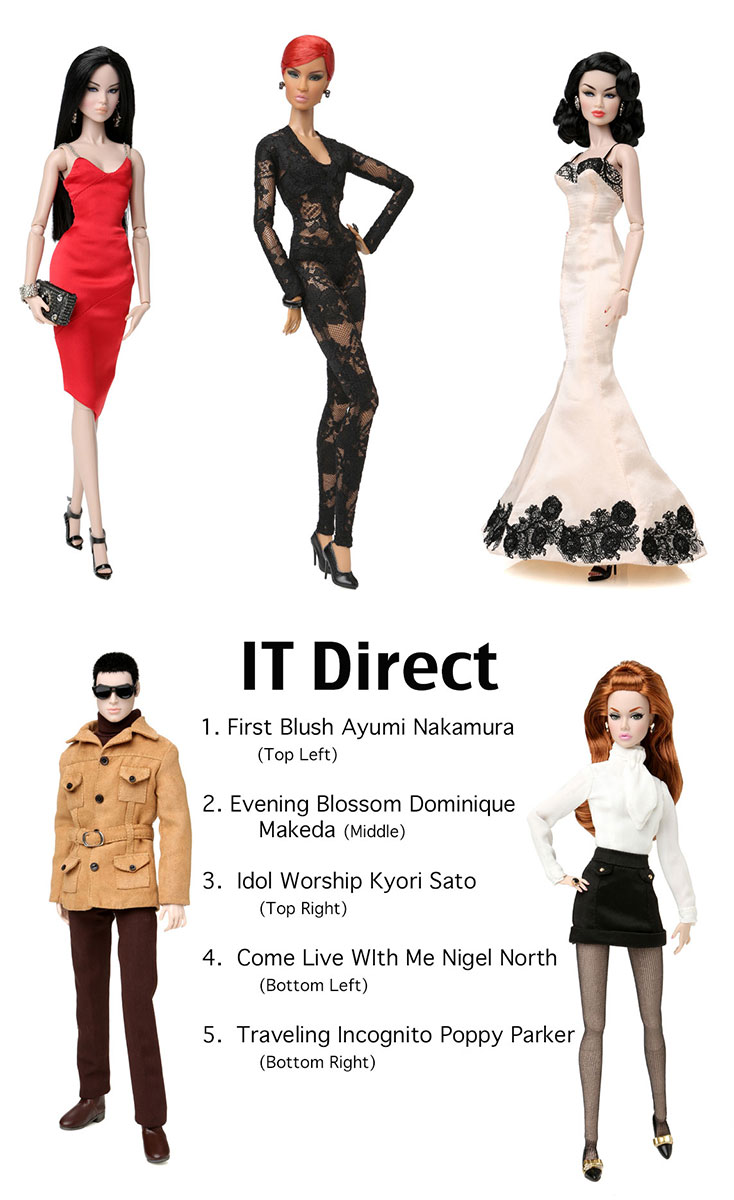 In addition to these five dolls, there were six Color Infusion female dolls with six separate ensembles representing iconic Hollywood. 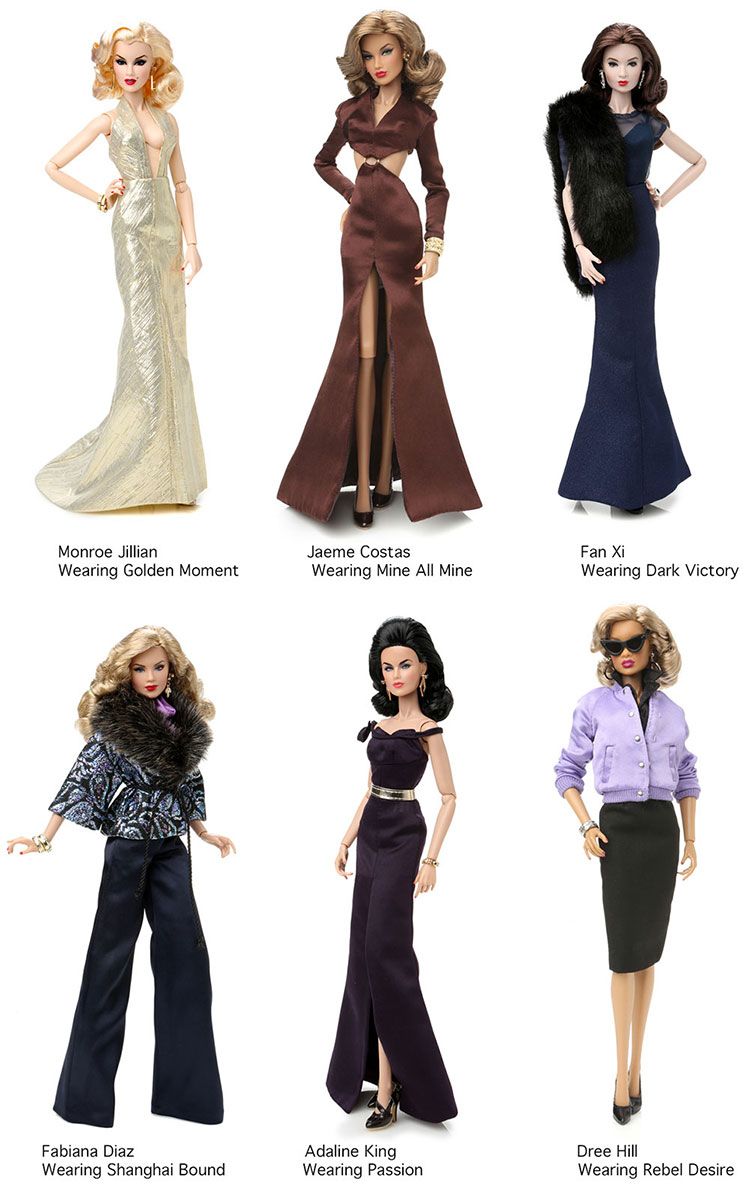 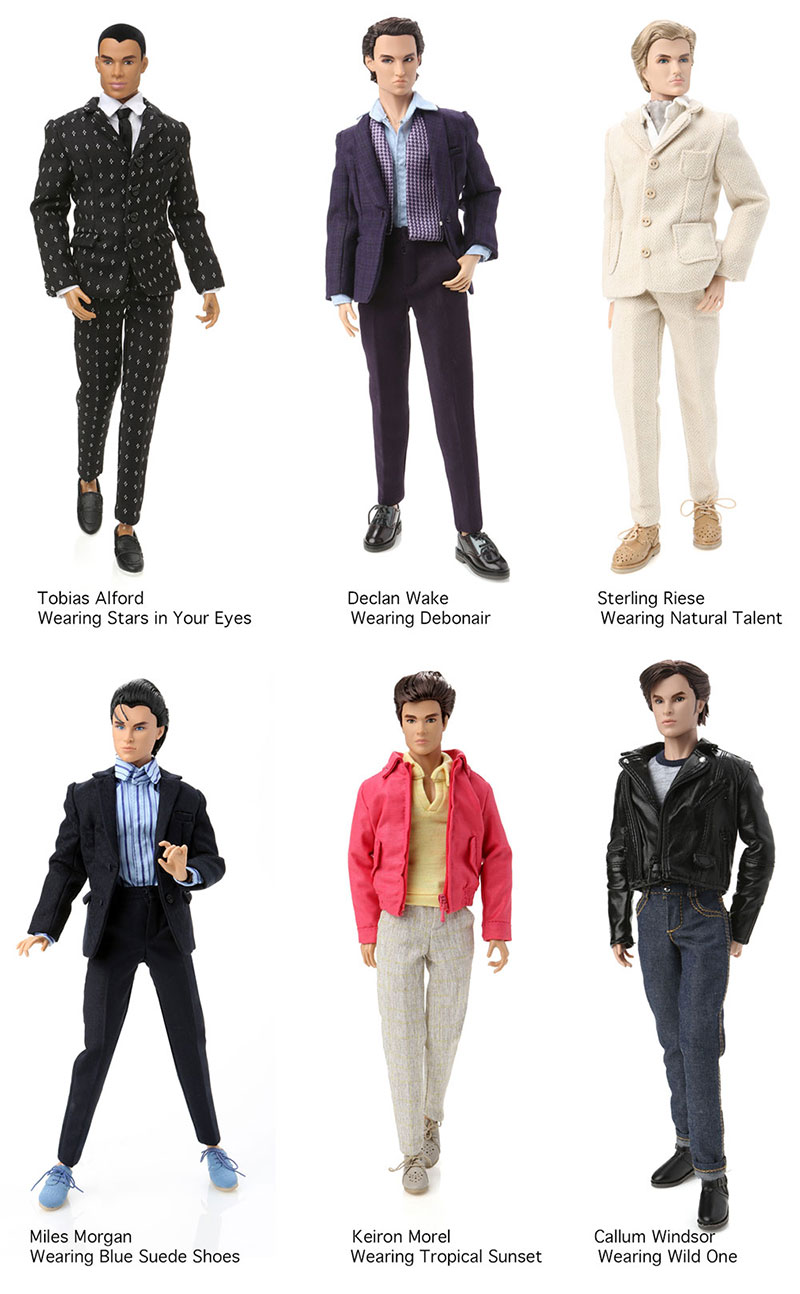 30 Dolls and I only purchased two on secondary market.  Do you think you know which ones?  Which were your favorite so far?

The Event Dolls - A View from Outside Part II

30 Convention dolls have now been released.  I had four near misses but two direct hits.  (There is one doll already shown that is still in the running.)   We are ready for the Event Dolls and they are always dangerous to my pocketbook.  BUT, my loving husband has told me I can pick a doll for Christmas.

The first event is the Welcome Banquet.  The table centerpiece is Time and Time Again Adele Makeda.  Had I not already received the mainline Adele, Timeless, I may have been tempted.  I believe Timeless is one of the best IT dolls produced this year.  This year's centerpiece dolls were produced in an edition size of 450 and cost $150.  That's a big difference from the 200 or less editions from the past.

The gift doll was Out of Sight Nadja Rhymes.  This doll worries my bank account. 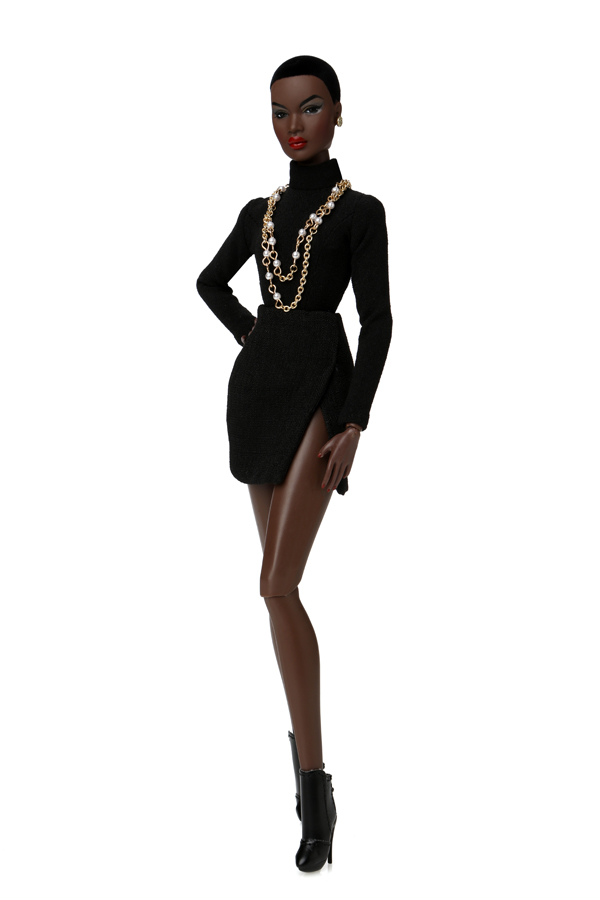 My favorite Nadja Rhymes mold 1.0 is Urban Outfitting which is also a flocked hair doll.  In addition, I have 2015 mainline Polarity Nadja on order. 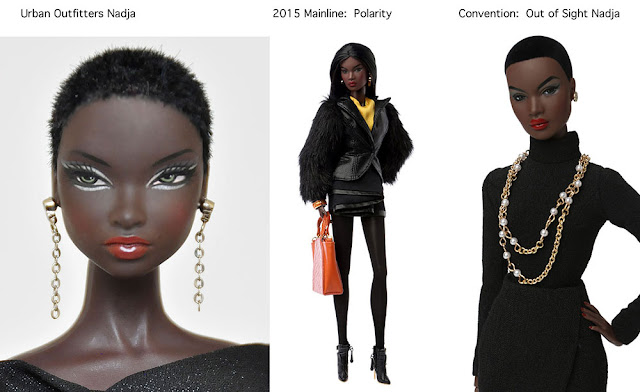 I am still haunting e-bay over this doll, but I'm hoping her secondary market price will come down after the convention.

The Poppy Luncheon is on Friday, so we get two new Poppy Parkers.  First up is the centerpiece (again edition size 450, price $150).   She is Love and Let Love Poppy Parker.  She will make a great companion to the 2015 mainline The Camera Loves Her.

And the gift doll was called Paper Doll Poppy Parker. 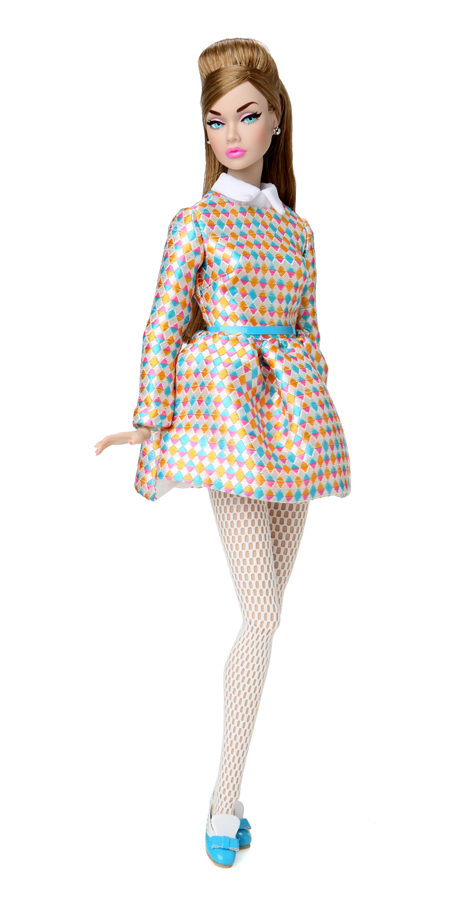 There was no dinner on Friday night.  IT provides a dance floor and "marketplace" where artisans can sell their wares.  The lack of a third dinner may be the reason for such large edition sizes for centerpiece dolls.

On Saturday, there is another luncheon.  Attendees must pay extra to attend and be a member of the W Club.  The centerpiece doll was Veronique on a NuFace body.   She is called Stage Presence Veronique Perrin and is an obvious nod to Jean Harlow.  Somehow this doll reminds me of so many other dolls available to collectors already.

And the gift doll was a collector's favorite.  She is Sneak Peek Eden.  This doll will definitely be one of the most sought after from the convention.  Fortunately, her edition size was 600, so patience will definitely pay off. 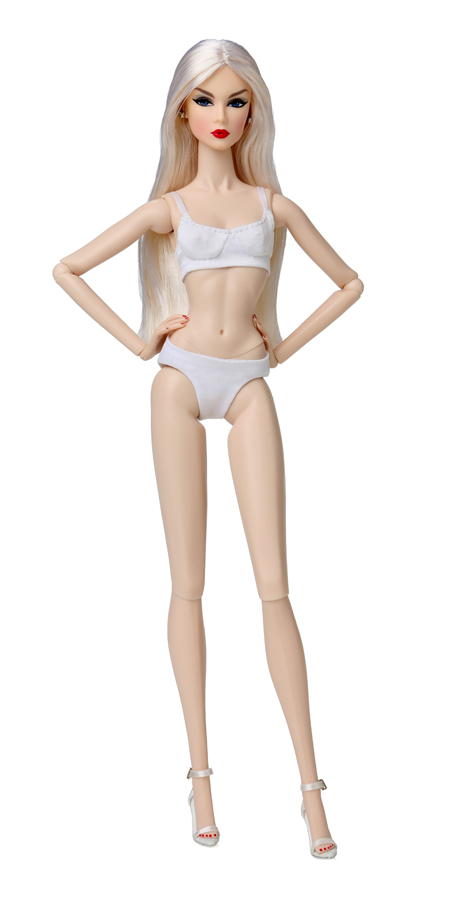 I rarely pass up an Elise since I made the mistake of missing "Mrs. Napkinhead".   (Reference to Jude Law in "The Holiday" where he entertains his children with a napkin covering his face.  When Engaging Elise was previewed, I referred to her "hat" as a folded napkin and "Mrs. Napkinhead" stuck.  Now Engaging is the most sought after of all Elise versions and I passed because of a hat!  Stupid me!) There is just too much wrong with this doll.  I don't like the see-through material of the dress and how you can see the pockets.  This hair style was used on Fete Accompli Tatyana several years ago.

And the Official Souvenir doll is a new character, Making An Entrance Karolin Stone. 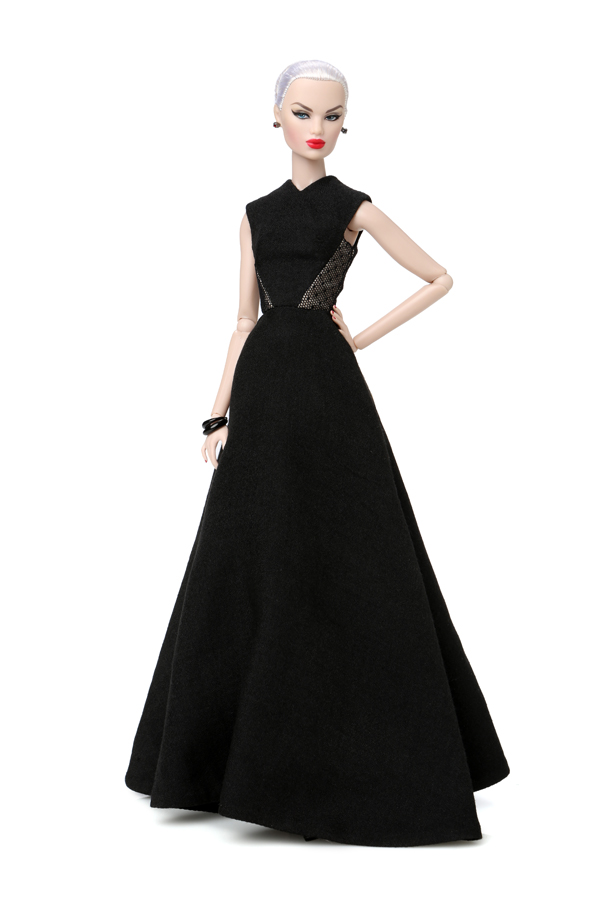 I've not seen a reaction to a new character this extreme since the Concerto in M Agnes Von Weiss.   This doll is selling less than $200 shipped.   Since Agnes is now a collector's favorite there is hope for Karolin.  This doll reminds me of Air Apparent Veronique from a previous convention.  Someone posted that Karolin reminds them of Dark Emma Swan on Once Upon A Time which has me thinking I may need her to go with "Go West" Natalia/Evil Queen Regina.

These are the final 8 dolls from the convention.  We have a grand total of 38 dolls - talk about a stomach punch to the budget!  I believe this convention was quite good.  It will appeal to the "glam and glitz" crowd and still provides some nice redress dolls for collectors who like things a little more casual.

It is possibly the most diverse collection I've seen.  There are 5 Poppy Parkers, 9 Hommes, 11 NuFace. Dolls were represented in Asian, Black, White, Hispanic, and Tan.    Personally, I would've liked to see a Rayna.