I guess I just need to "cut to the chase".   There is no denying that 2016 belonged to one particular character/sculpt/line.   I have gone back and forth with this doll for years, but 2016 was definitely the year of Poppy Parker.

When the mainline was previewed "Poppy Goes to Paris", I figured I was safe.  There was something about each retail doll that I could use to talk myself out of purchasing it.  Either the ensemble was not to my liking, the hair looked off, the eye screening wasn't a favorite, etc. etc. etc.  Blah, Blah, Blah.  Yada, yada, yada.

I didn't even enter the lottery for the two I liked best ...

But when these dolls started showing up in collectors' hands and photographs appeared online - I was a goner.   2016's Poppy Parker line cost me big time!  (Unfortunately, I haven't released all of the dolls I got from this line from their boxes, so I apologize for some of the photos.)

I purchased Powder Puff and Miss Amour from the same collector who needed money to pay for an unexpected expense.  Here is the confection known as Powder Puff with those dreamy blue eyes!  This doll alone would be in the top five of my 2016 countdown! 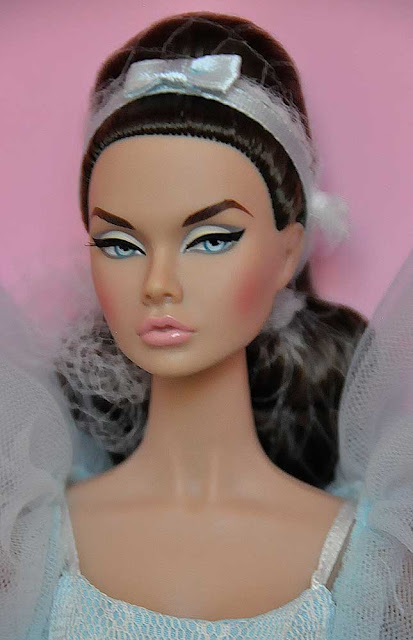 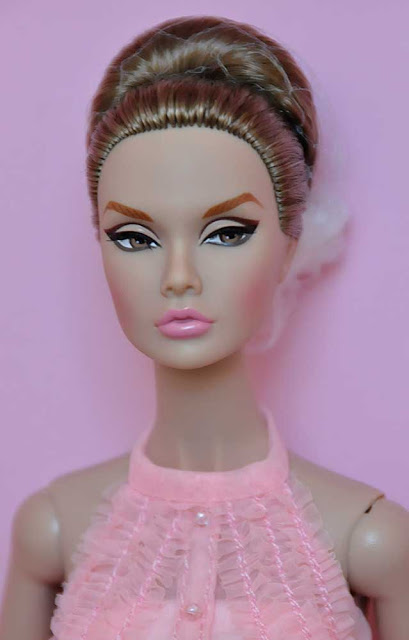 Naturally, I thought the poodle for Paris in Springtime was ridiculous, but I couldn't resist this gorgeous doll IRL with the Japan skin tone, black hair, and lavendar eyes.  Another countdown contender? 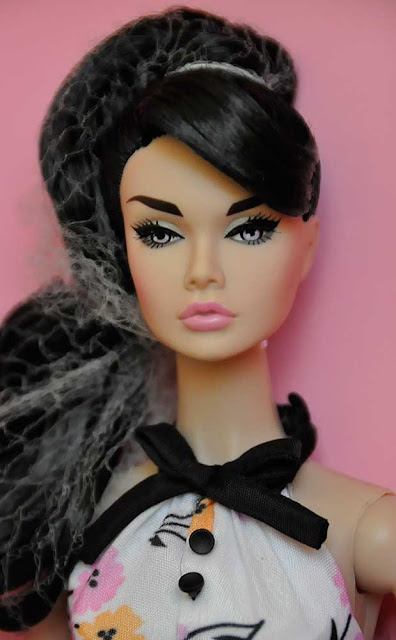 The minute I saw the first photo of Night At The Ballet (which I passed on because I hated the material used for the dress), I rushed over to a dealer and grabbed one up at retail.    Her hair and face up were so much better than the promo photos.

And even though the "platinum hair and red lips just aren't my taste", I got on the wait list for Ooh La La and got one at regular price.  What an exceptional beauty! 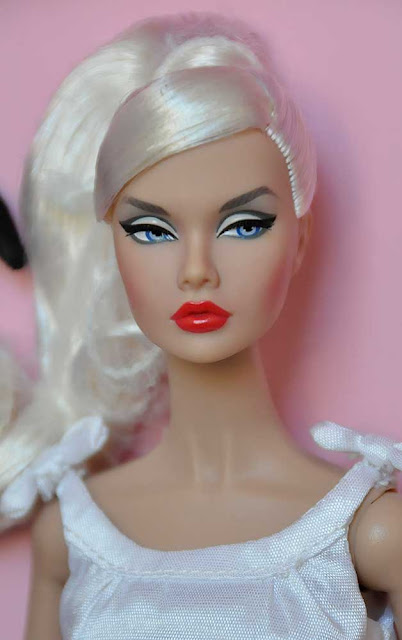 And the giftset is just amazing!  This is one of the best produced purchases I made in 2016.  Easily another member of the top 5 of 2016! 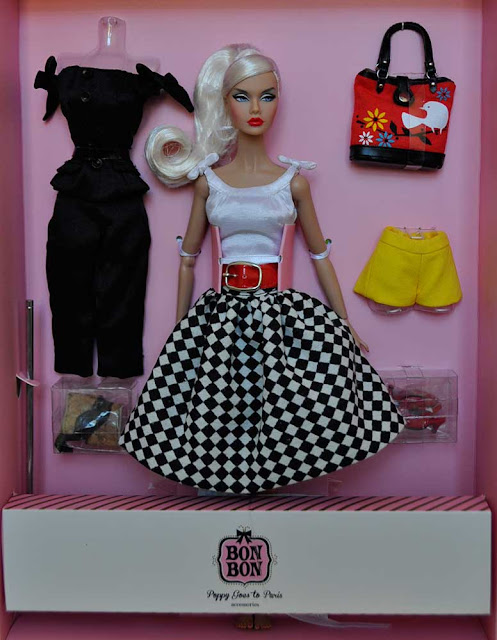 Then there was the Integrity Convention, and four more gorgeous Poppy girls showed up.  I just could not resist Just My Style. 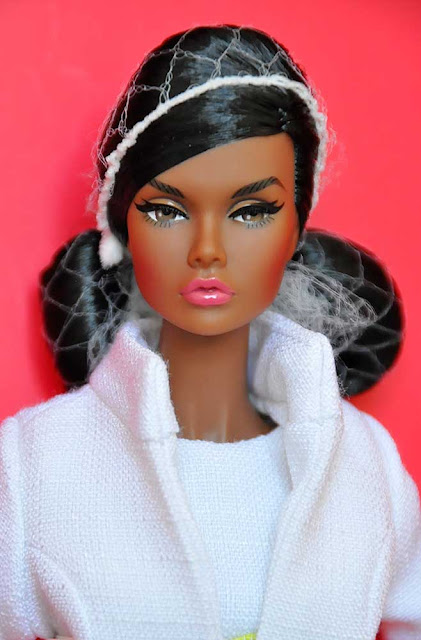 But the Poppy Parker that was the cherry on my Sundae was one that I never expected to fall in love with.  I like to joke around that there isn't a dark-haired Poppy Parker that has been able to set up permanent residence at my home.  I have some beautiful redheads and knockout blondes, but I have never cared for the brunettes (yes, I even sold Bergdorf Goodman).  I think David Buttry took this as a personal challenge and decided to prove me wrong.  My favorite Poppy of 2016 is the one whose ensemble was originally my least favorite.  Here is Bonjour Mademoiselle in her box: 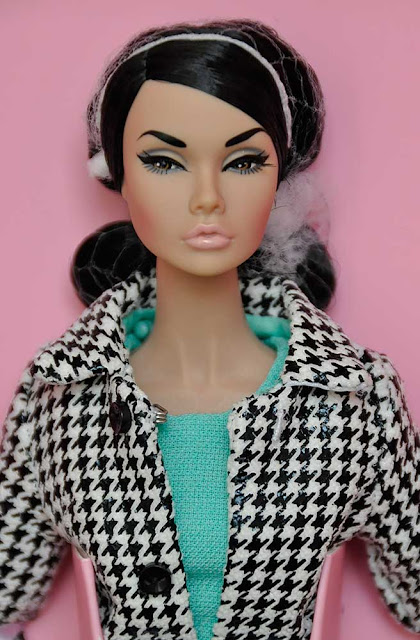 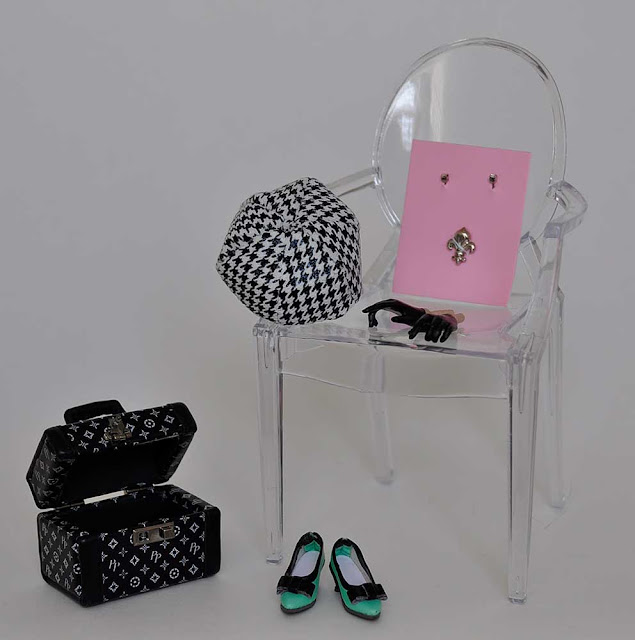 How she looks out of the box.

Another closeup - I just love that fleur-de-lis pin! 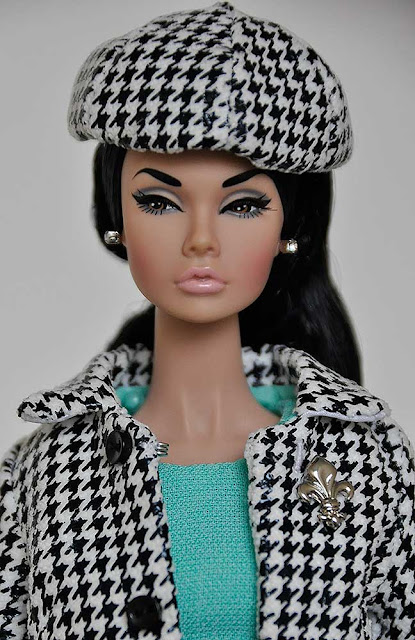 My Number 1 Doll of 2016 is Poppy Parker and my Number 1 version is Bonjour Mademoiselle.  Had I not given the Number 1 spot to the sculpt, half of my top 10 spots would've been filled by the different versions of this doll.   Integrity Toys just got it so right this year - Poppy was a little more sophisticated and little more grown up.  She was total perfection!  Poppy Parker has never dominated my list or my year's collecting before, but I guess there is a first time for everything! 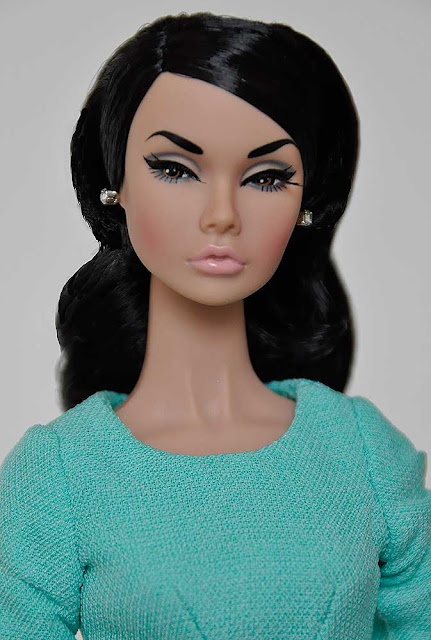 This doll was one of the reasons my top 5 dolls kept switching spots.  I couldn't decide where she belonged in the countdown.  She started at 9, then continued to move up the chart the more I looked at her.  Here she is in full length in her box.

When I photographed her face, she climbed even more. 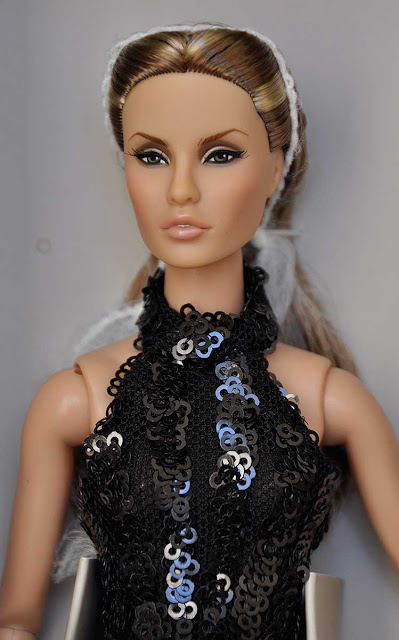 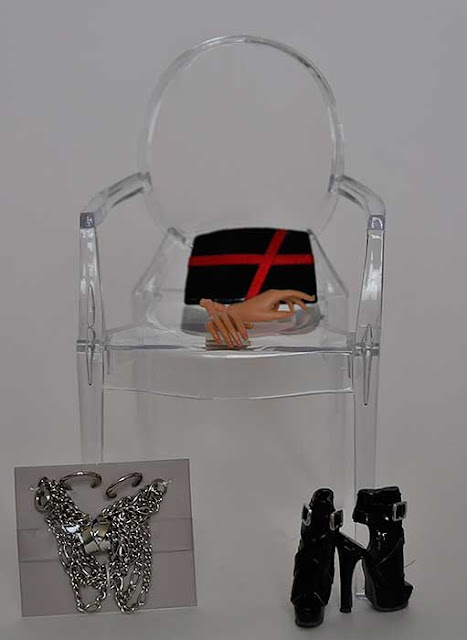 A favorite part of the Integrity Convention is a design competition by collectors.  For the past few years, Integrity Toys has produced the winner of the design competition.  In 2015, the winner was Jason Kramer.  When IT notified collectors of their interpretation of his design, the doll was not received favorably.  Specifically, the doll's face was compared to the "cat woman" whose cosmetic surgery was all messed up.  Here is the photo from Integrity Toys. 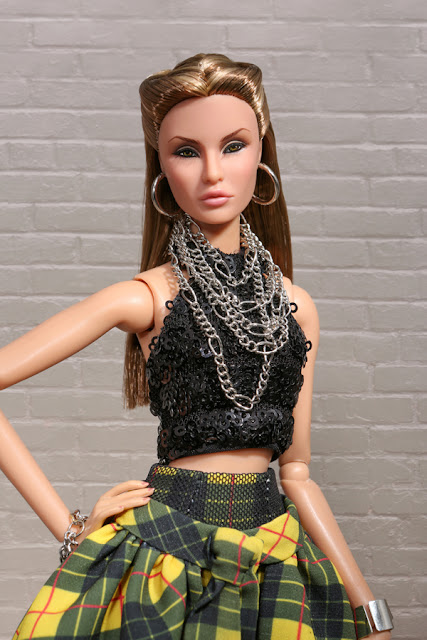 In response to collector displeasure (many collectors just didn't even purchase this doll), IT "tweaked" their production a little.  The production size was only 500 (many W Club dolls are produced in the 1200-1400 range).   Those collectors who did not purchase this doll went ballistic when they saw the production doll.   The doll is wearing capri pants with a added, removable train.  It's extremely well made and looks amazing.  She is the Hungarian Skin Tone. 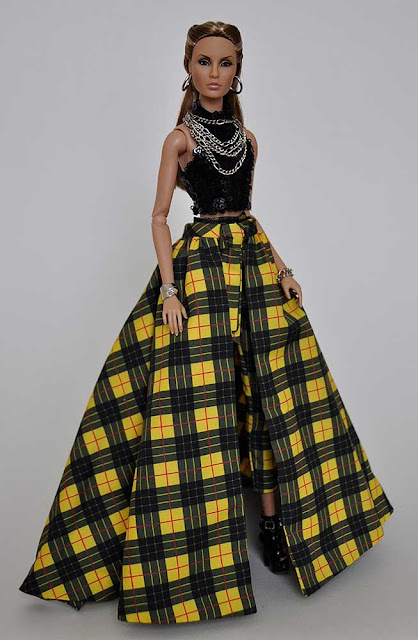 No one can call this doll "cat woman".   Rayna is a favorite sculpt of mine and the only sculpt that I can honestly say I own all versions of in my collection.  I love the change to this doll's eyes, and I really like the "open mouth" (first time produced).   Out of the box, this doll refused to take a bad photo.  Defiant Rayna climbed right into spot #2 of 2016.  Exquisite doll!  A great addition to my NuFace lineup. 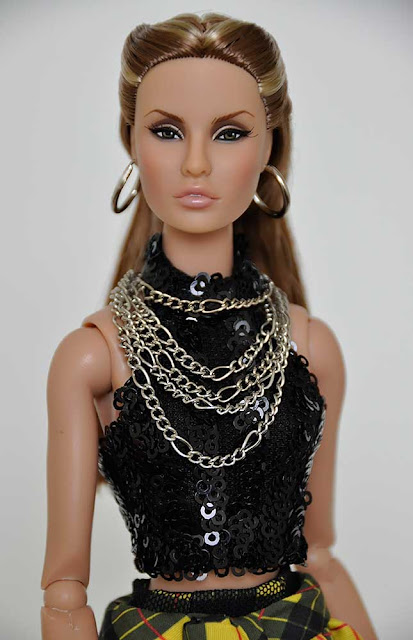 The next doll has already been reviewed in my blog, too (Review of Glamazon Adele Makeda).  My top five dolls have changed position too many times to count during the holiday break.  I'm not sure whether to blame it on the fickle nature of my collecting heart or on the meds the doctors have me using since the auto accident.  This doll was Number 1 for a long time.  Number 3 has been the lowest she ever fell on my countdown, but I'm sure you'll understand as we move forward on the top two spots.  Mold 2.0 of the Adele Makeda character is one of my very favorite sculpts.  There is just something so perfect about it.  Add a natural makeup pallet correctly done for black women, beautiful black wavy hair, and forward looking eyes without the whites underneath the irises and you get one of the most beautiful Adele 2.0 dolls produced to date - and on a FR2 body!  Number 3 of 2016 is Glamazon Adele Makeda. 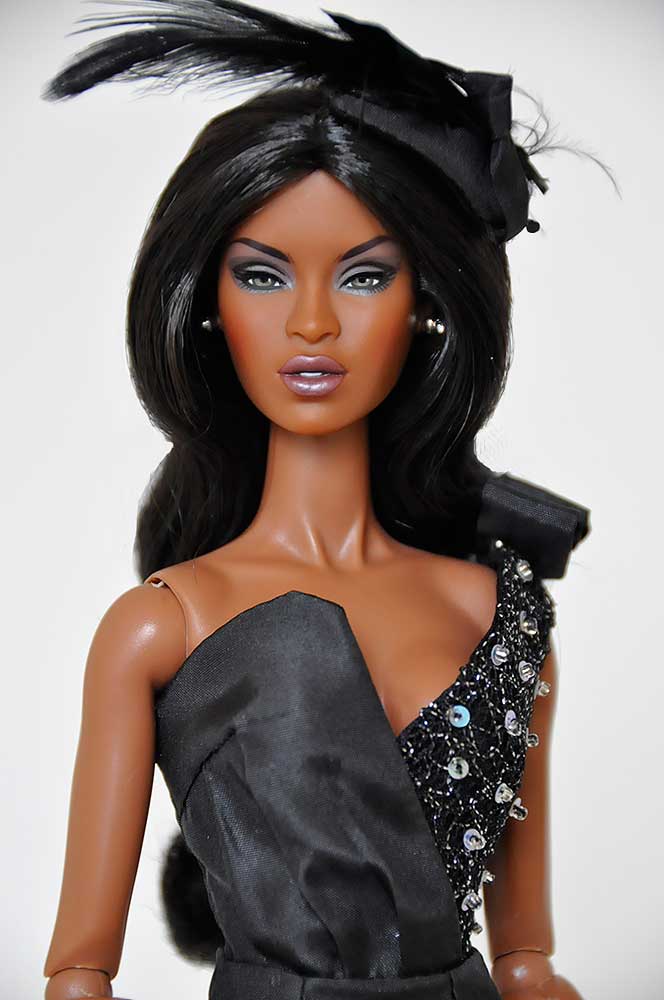 Posted by Desperately Seeking Dolls at 6:13 AM 2 comments:

I've already completed a review of the next doll in my countdown  (Review of Key Pieces Elyse Jolie).  No matter how critical I try to be of this doll, she continues to impress me with how she redresses.  I was meaning to photograph all my dolls wearing black, but that plan got "kicked in the head" by my accident.  Here she is wearing Voltage Erin's pants, Sensuous Affair Giselle's blouse, and Follow the Line Kesenia's jacket.

I think this version of the Elyse Jolie mold is more useful looking than earlier versions. 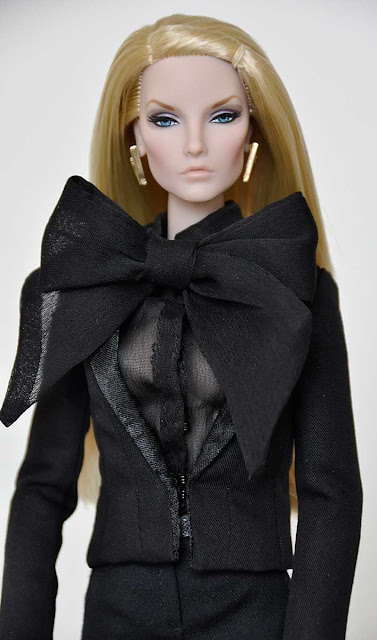 Number 4 of 2016 is a new favorite around here; easily placed in the top five:  Key Pieces Elyse Jolie. 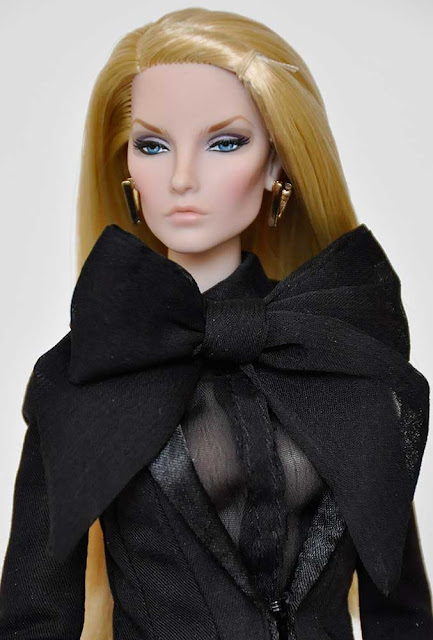 The next doll was a surprise for me.   There are certain Integrity sculpts that I prefer over others.   Since this mold is not one of the "Core Dolls" in the Integrity lineup, she doesn't often make an appearance.  This year she showed up not once ... not twice ... but three times.  Her release in the mainline was a disaster, and it was great to see her redeem herself at the convention.  And what better to redeem yourself than being the actual convention doll!  Here is Diva Dasha in the box.

And a closeup in the box.  She reminds me of Cybil Shepherd. 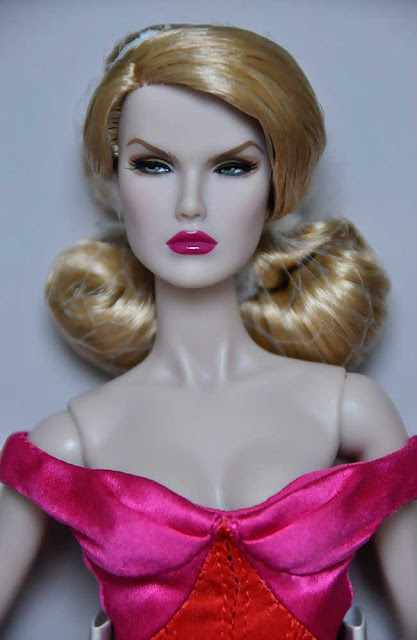 Here are her accessories.  She also came with a Versace mini skirt and ankle boots.  This time in a rose pink color. 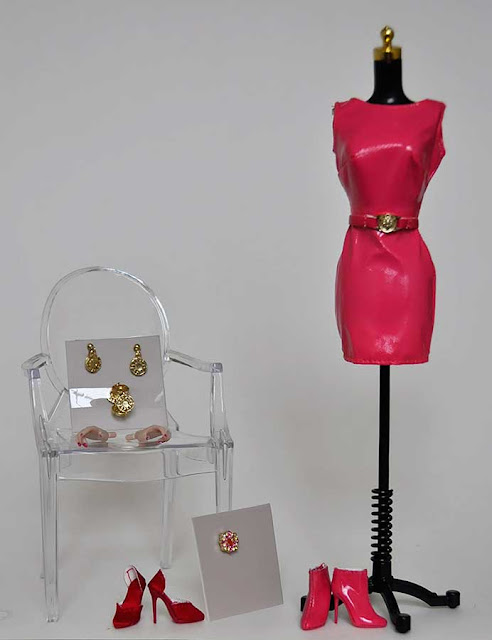 I often wait until I see IRL pictures of dolls and try to choose one that best fits what I like in a doll.  It took me a few weeks, but I found this one.  Here she is outside the box.  The gown is inspired by a 1995 Christian Lacroix original. 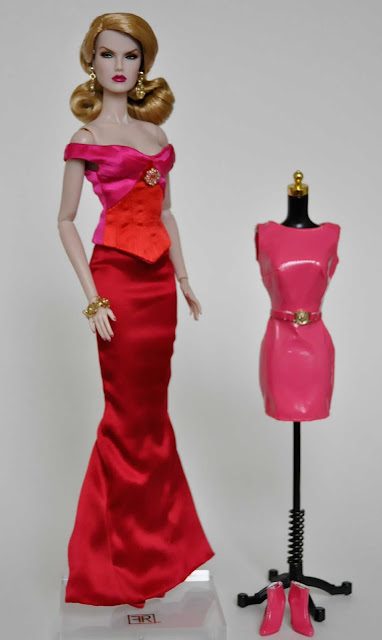 Let's add the train - which attaches with little hooks and threads.  I don't know how long I will be able to leave her in her original ensemble - for some reason I think that stain warning card should be taken seriously with this girl! 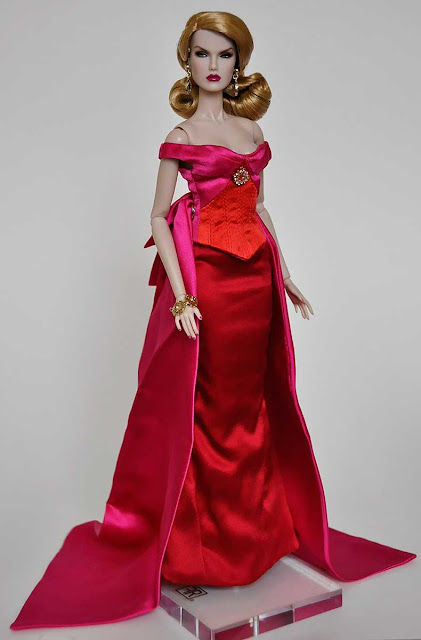 I wanted a doll with hair that I wouldn't have to wash or try to restyle.  I got exactly what I was looking to find.  #5 of 2016 is Diva Dasha. 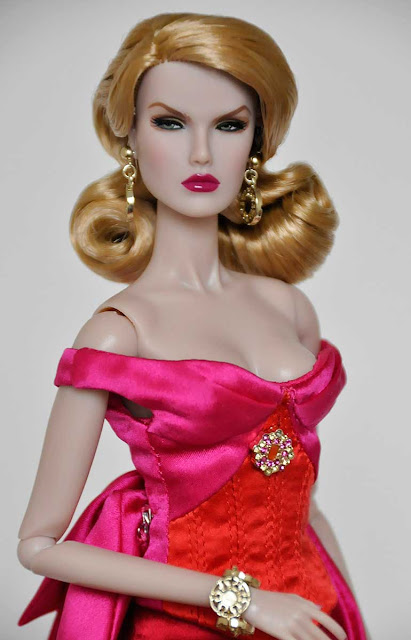 As I posted earlier, I am always hoping for something different and new for my collection.  I have very few red haired dolls in my collection.  Either the makeup or lipstick doesn't look right or the hair just doesn't work.  I was so happy to see Fashionista Eugenia show up in the convention collection.  Somehow everything just works.

It didn't hurt matter that she was wearing the iconic Versace "Safety Pin" dress!  # 6 of 2016 for me is Fashionista Eugenia. 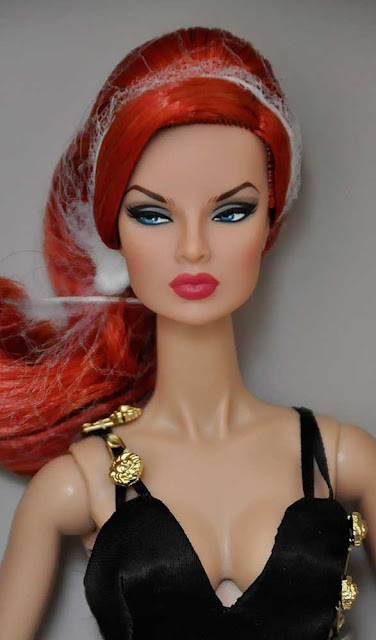 I want to apologize for the lengthy intermission.  I thought I was feeling better, then I got to feeling worse!  I was not able to debox the next couple of entries for my countdown.

I have been collecting for quite a long time and have been blessed to own most dolls I had an interest in acquiring.  I guess that's why it is difficult for IT to impress me.   I am always hoping for something new and fresh - something different from everything else already in my collection.  It's for that reason that Legendary Natalia Fatale is added to my countdown.

I appreciate that she is a Hungarian skin tone, since I don't believe she has ever been released in this color previously.  I also like the color of hair and the fact that her eyes are forward looking.  Even though I am not a fan of evening gowns, I absolutely love this gown inspired by a 1992 Versace original.  #7 of 2016 is Legendary Natalia Fatale. 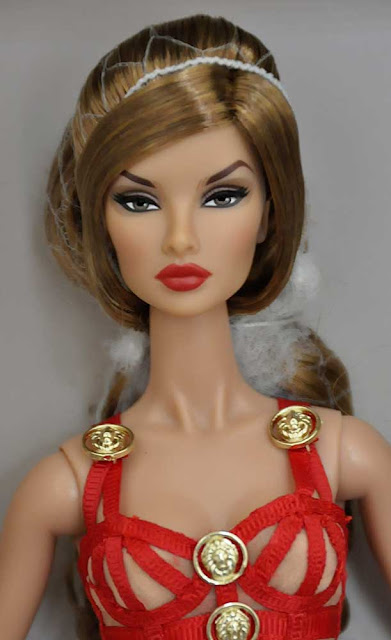