The Power of Three

Well ... it had to happen.   The pre-orders started coming in faster than I could get them open.  I got overwhelmed ... I got confused ... I OD-ed on dollies.

I had been pretty disappointed with the "New Close-ups".     I didn't purchase Eugenia nor Vanessa.   I sold the heads of Adele and Kesenia.   But the last three sort of decided to stay around.

I really have decided that I like Scene Stealer Isha.   She is wearing the shorts from Ask Any Girl Poppy Parker and the blouse from Winter in Montreal Barbie.

She's a lovely doll to redress, and I was surprised that I could actually forgive the use of the painted and applied lashes.   This is a closeup of her face. 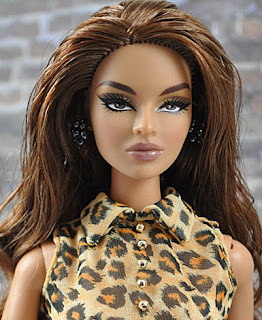 I owned many of the older Veronique dolls, but only three remain: Flame Rouge, Diamond Dusted, and Sheer Goddess. When IT transferred their dolls to the taller bodies, I don't believe Veronique transferred that well.   There are only two that I own.  Sound Advice (which is a OOAK repaint by Vin Trapini) and Stylish Escape which was the first Wu Club doll.  I really like what they have done with the new mold. 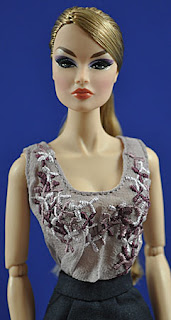 She has a very lovely and graceful face.   I know it will upset many Vero-addicts out there, but I kind of like this mold better. Here she is wearing the blouse from Silkstone Pretty in Pleats. 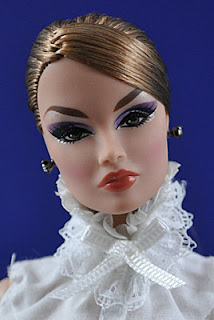 The biggest surprise for me is Easy Elegance Korrine.   She is very dramatic looking.   Her nose is very different from the "turned-up" ones we are used to seeing.  I think my only problem with this doll is her lips.   They are overdone.  I may have her repainted. 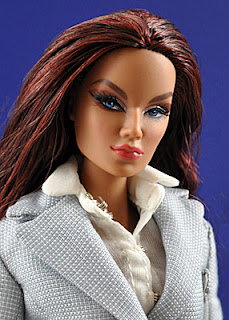 So that means I've added three dolls to the collection bringing that total to 20.  Unfortunately, none have left!   But the totals are still very much in line (44 are gone!).  I think now is a very difficult time to sell dolls.  The FR Convention is coming up in a couple of weeks and IT saturated the market with so many dolls released all at one time.   ... So what have I decided to do about all of the outfits from the 2011 "New Close-Up Collection"?   I decided to create my own re-imagined homage to autumn. 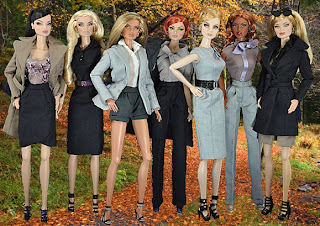