I'm not 100% sure how they work, but on flickr they have this social game where individuals can choose a theme, post a photo, and then tag others who post on flickr to add their photos to the theme.  I think this is super cool.  I just started posting on flickr this past fall, and was only ever been tagged once.  I was tagged for the Five Favorite Dolls of 2012.

My dear friend Rich (who is a regular name on my blog) tagged me for the theme "Seductive Side Glance".  So, now I have been officially tagged twice!  He posted an incredible photo of High Drama Eugenia dressed in Randall Craig.   I got tagged by Rich just as I received my NRFB High Drama in mail.  (I actually sold enough Monster High Dolls to purchase her!  She'll be the focus of a future blog entry.)   I considered this an example of serendipity.  Thank you Rich!

It has taken me a couple of weeks to figure out who I wanted to choose for my photo and how to dress them.  I looked over my shelves and carefully considered all my girls who have a side glance.  Tonight I looked at a girl who I consider to be one of the most sensuous dolls ever produced.  So ... here is Cosmetic Takeover Natalia wearing the lingerie from the 2012 Integrity Doll "And Another Thing Kyori". 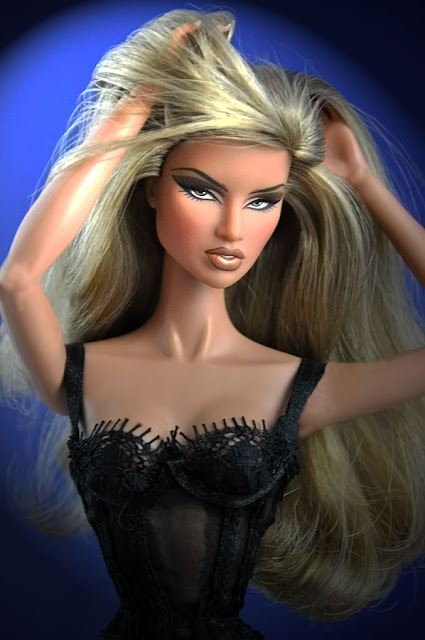 To see some other phenomenal photos, just search Tag Game:  Seductive Side Glance on flickr.
Posted by Desperately Seeking Dolls at 11:19 PM 4 comments:

I'm feeling spring fever ... and spring means baseball.  In view of this, I'm going to write this blog in a sports analogy.  There is a serious controversy being played out right now among collectors of Integrity Dolls.  Please know that these are my views and feelings, and it is not my intention to insult or condemn anyone.  This blog is just "how I see it".

First, we have the home team up to plate.  I don't know if it was by accident or marketing, but Integrity Toys announced Mother's Day week their newest doll - a doll based on the film Mommie Dearest.  She is priced at $150.  I'm not sure Joan Crawford is the mother we should be celebrating during Mother's Day - so the referee declares "Foul Ball!" 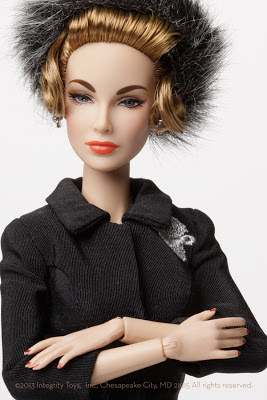 "Strike One!":  Personally, I don't believe the doll looks anything like Faye Dunaway or Joan Crawford.  She is a lovely example of the Dania/Lana Turner mold and reminds me a great deal of the FAO Lana Turner or the Sunset Boulevard doll (which was a Giselle mold).  Two other Dania dolls have already been previewed this year (see earlier blog post) which I prefer.  Having already preordered and paid deposits for the earlier two Dania dolls, the face-up did not sell this doll to me.

"Batter Up":  The doll introduces a new body system for Integrity Toys which I believe is their response to a problem with earlier releases that yellow and turn brittle - helping collectors rebody some older favorites.   The doll will have a new neck knob system similar to the Azone dolls. 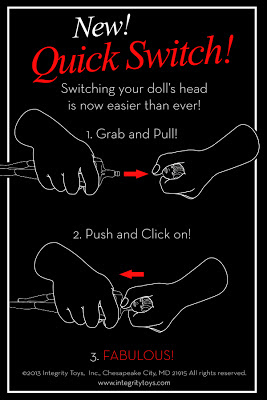 As my readers know, I am definitely a pro "frankendolly" collector.  Although I really like the ease of this new system, I'm not afraid of a heating pad (just ask my dolls!).  It will be interesting to own one of these and see how it works.  The ball approaches the plate .... I was totally ready to purchase the doll for the body until I read that Mommie Dearest uses "The Integrity Body" which translates to "Victoire/Bride of Dracula" body.  Although I like Victoire very much and own every edition of her so far, I don't care for the body on other dolls and have rebodied all other dolls that are released using it.  In my collection, Victoire/BOD bodies are reserved for Victoire dolls only.  So for me, the batter missed the ball and we have "Strike Two!"

The only other selling point of this edition is its connection to the movie which is where the controversey comes in and leads us to "Strike 3 - You're outta here!"


Although I believe the doll is primarily a tribute to the "over the top" performance by Faye Dunaway who led the movie directly to cult classic status, it is still based on the autobiography of Joan Crawford's adopted daughter Christina.  The topic of the movie is Joan Crawford's alleged abuse of Christina.   In one scene she actually beats Christina with a wire coat hanger in the middle of the night.

There are many collectors who love the camp and exaggerated performance.   It is so bad that it is humorous.  The doll definitely appeals to those fans.   However, there are several collectors who don't care for the darker message behind the movie.  Some are passionate against it.  I respect everyone else's right to enjoy the film and purchase the doll; however, the subject matter of the movie is too personal to me as an elementary school teacher.

Here is the closeup of the doll's face from the scene above.  Thus the need for the new neck knob mechanism - to switch between the regular faceup and the cold cream faceup. 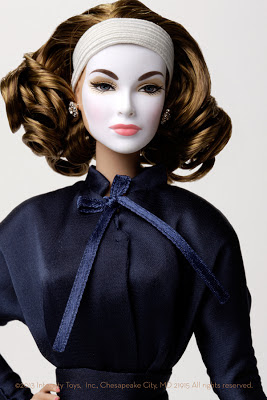 I am not easily offended, but statements were made suggesting that non support of this doll is choosing to ignore the social issue of child abuse.   Neither the movie Mommie Dearest nor the production of this doll is a campaign for social awareness of child abuse.  That's just silly reasoning!  I believe many collectors found the inclusion of the coat hanger as an accessory the most disturbing part of the whole thing.  (Without the weapon of abuse, the dolls isn't as objectionable.) 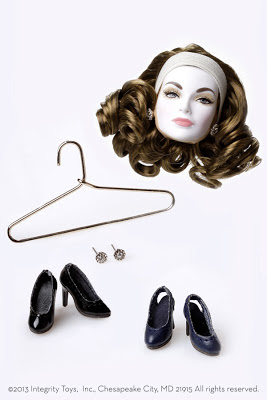 I really do respect everyone’s rights – I just expect the same in return.   I have neither condemned the doll  nor any individual for their choices in this matter, but have had others suggest that my decision to not buy this doll was avoidance of a real life topic and choosing to live in a "storybook tale life".  This got my dander up a little bit.

Maybe my dolls do live in a “storybook tale life”.  It’s an imaginary life that I create for them.  They are beautiful, have an exquisite wardrobe, attend gala events, and drink expensive champagne.   I live in the real world every day and have actually sat in on child abuse cases; my dolls are my escape from the issues I must deal with daily.

If I wanted dolls that represented the real world, they would be pear-shaped with bumpy thighs.  Instead of jeweled rings and necklaces, a waxing kit, tampons, and a douche box would be the accessories.

It was also suggested that dolls are used to help children act out situations in therapy.  Maybe in Manhattan they use $150 Limited Edition collectible dolls designed for adults in pediatric therapy sessions, but here in the south, we just pick up a few discarded Barbies from Good Will.

The "IT cheerleaders" can keep cheering ... but I'm sitting on the bleachers for this game.  (I know they don't use cheerleaders in baseball, but I couldn't resist the extended analogy.)

The photos in this post are the property of Integrity Toys and are used for informational purposes only.   I do respect the creativity behind the design of this doll as it is based on a cult classic movie, and I genuinely feel sorry for the design team behind this - I know they are distraught about how this has been perceived and how some feel about it.  Although I can see the inclusion of the coat hanger as an attempt at humor - the designers missed that some collectors would see a darker meaning behind this accessory.  I truly believe the controversy surrounds the symbolic meaning of the "weapon of choice" and daresay many children and adult collectors have personal experiences with regular household items being used for punishment.  A coat hanger by itself may trigger a small tremor of memory, but the coat hanger in the visage of the individual inflicting the harm causes an explosion of emotional pain.

I know IT will read the blogs and comments.  At best, this controversy will probably help the company grow in sensitivity, and that's never a bad thing.

For another review, check out Terri Gold's blog and read some of the comments.  The controversy among collectors is apparent there.  Here is the link:   http://terrigoldphoto.blogspot.com/2013/05/integrity-toys-mommie-dearest-gift-set.html#.UZMANYJ_o3c