Tales of the Body Snatchers Part III: The Conspiracy Theory

Many collectors of Fashion Royalty dolls have been very upset recently that the Fashion Royalty body will be officially retired with the release of the 2013 Convention Dolls.   Apparently, the FR2 body has been revised and the two lines will be merged as one.

Even more upsetting was the Integrity Toys announcement that replacement bodies for the older Fashion Royalty dolls were not going to be produced or sold.  Many of these older dolls have discoloring bodies.  This issue has never been addressed by the company.

Some collectors have worried that environmental factors could influence this discoloring problem.  My husband has worked in printing for almost 30 years.  He deals with inks daily.   He wanted to understand why I was purchasing so many of the same doll recently (Korinne from last blog post).  When I showed him the blog, he said that inferior inks will turn yellow.  It is a common problem in printing also.

To further illustrate this point, I have taken a photo of my High Drama Eugenia.  I acquired her recently  as a NRFB doll.  Here she is undressed:

As you can see, the Fashion Royalty body is several different pieces put together.   Apparently, when High Drama was pieced together, the left thigh, panty area, and top chest piece all came from the same run of plastic (and have discolored), whereas the other pieces came from a different run of plastic which has not discolored.  Had it been environmental, the doll would have discolored evenly.    This rules out environmental factors.  So everyone who has worried that they have done something to influence the discoloring of their $100+ dolls, should rest easy knowing it has nothing to do with environment.

Now for the Conspiracy Theory ...

One of the dolls from the Classics Line is Captivating Anja: 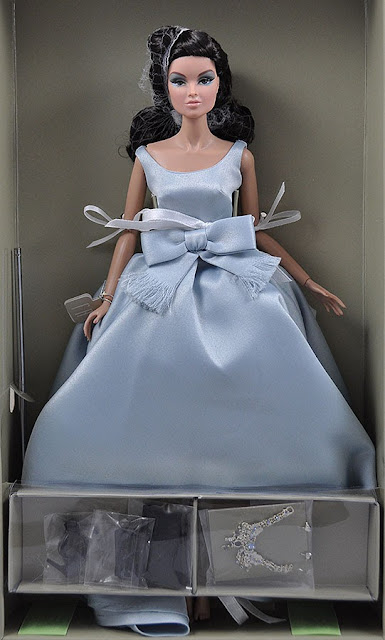 As you can see in her closeup, this was a nod to an earlier FR doll, Paradise Vero from 2003. 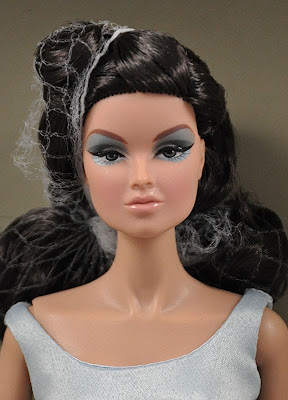 She, too, came with some nice accessories. 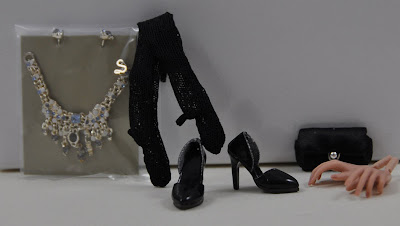 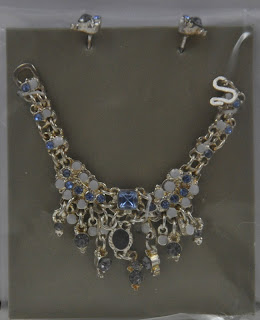 Her gloves are of the same lace material used with Polished Korinne, only they are opera length.  The gown is quite attractive. 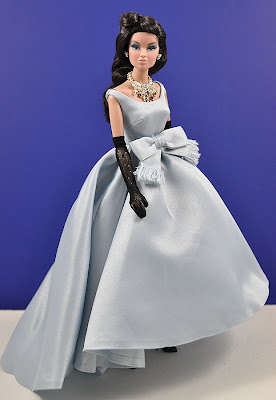 FR collectors are not responding favorably to the facial screening without the lower eyeliner. 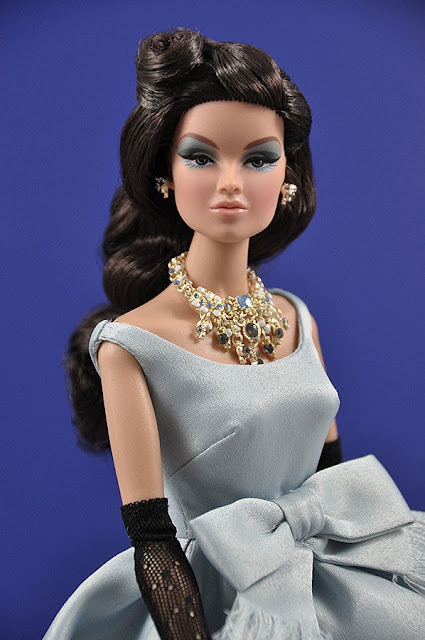 Although this is a lovely doll, it is inferior to the IFDC version.  This doll has become easy to pick up nude on the secondary market at a good price.  It was only natural that I connected the dots and decided to do a little body switching with High Drama Eugenia.

SCREECHING BRAKES!!!  WHAT?  HUH?  The bodies do NOT match.  My High Drama head was too pale for the 2013 body.   Here is a photo of the Captivating Anja nude body next to a regular FR caucasian body.

What's up with that?? I remembered that I had commented to a collector friend that I thought Out Sass Vanessa looked a darker shade when I received her.  I even went so far as to suggest to another collector that Out Sass may be a possible body donor for his 2011 Psychedelic Splash Erin (which was produced with the Caramel - now called "Hungarian" - skintone that had been reserved for Dynamite Girls and Poppy Parkers.)

After further investigation, it seems that all FR dolls produced in 2013 (Out Sass Vanessa, Love the One Kyori, and Captivating Anja) have a darker caucasian skintone than previously released caucasian dolls!  I do not have the IFDC Anja to confirm if this is also true of that version.

Maybe the reason IT is not producing replacement bodies to sell is that they already knew the skin tone now being produced is not a match to earlier dolls.  I cannot use a 2013 Caucasian doll as a body donor for earlier released dolls.  I checked last year's regular line and convention dolls - their bodies are still the lighter caucasian tone.

So ... here's where the excitement is going to come in .... If IT has, in fact, changed the tone of their caucasian dolls:

1) Collectors will not be able to put doll heads produced prior to 2013 on the new Caucasian bodies from the 2013 convention - the older dolls will be a lighter tone and their faces will come across paler than the rest of the body.  I know some collectors were excited with the idea of moving all of their older FR heads to the revised FR2 body - AIN'T GONNA HAPPEN!

2) Collectors will not be able to take the heads from the Caucasian dolls released at the convention and put those heads on bodies produced prior to 2013.  Their heads will be darker.   The only dolls that could be used as donors for the Convention Caucasian dolls will be Captivating, Out Sass, and Love the One.  When those bodies are gone - since no replacements are being produced - they are gone FOREVER!

I would stock up on these dolls' bodies if I knew this to be true.  There are six FR dolls in the pre-order lineup.  There will be at least four dolls given to attendees and two/three dolls as centerpieces.  It's anyone's guess how many of these dolls will have the caucasian skintone.  It's anyone's guess if the skintone will be compatible to this year's FR caucasian dolls OR to the pre-2013 dolls.

So, what's going on?  For me, personally, this could be the straw that breaks the camel's back.

NOTE:  Since publication of this blog entry - IT released Japan and FR bodies as replacements for collectors.  These Caucasian bodies are the darker tone from 2013.  This helps those collectors who prefer the regular FR body and plan to change current FR2 White dolls to the older style body.

In my last blog entry, I posted that I was going to start stealing bodies from newer dolls.  During the "Webinair via e-mail" event, IT informed collectors that it had corrected the problem with tan dolls having plastic that changes color - especially the hands.

In the last few weeks, the FR Classics line has been released.  Fortunately, I purchased one of each new doll.  Here is Polished Korinne who has the improved tan body.

She came with some great accessories.

Here is a closer look at the jewelry.  It is gorgeous! 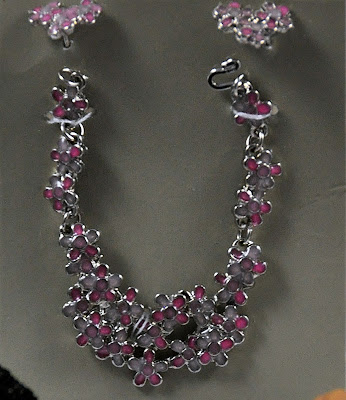 And the gloves are lace!  They are difficult to get on but are very beautiful. 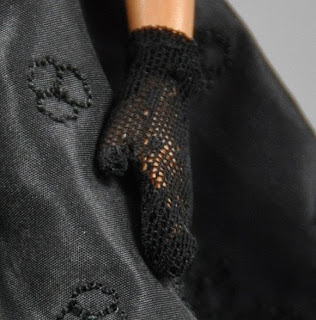 Here is Korrine out of the box. 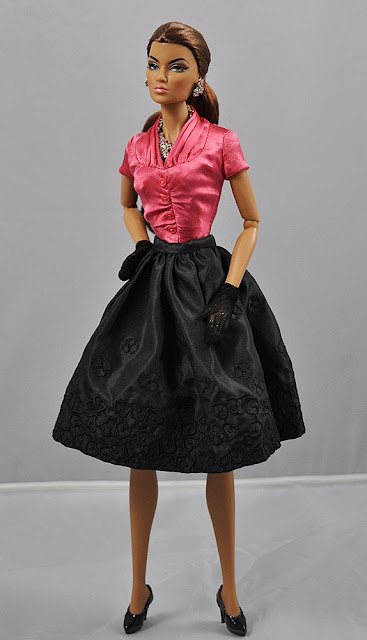 I originally purchased this doll for the blouse and jewelry.  Although I still think that Shake It Up Korinne from the 2012 IFDC is best representation of this mold, this doll really grew on me quickly.  I was surprised by how much I actually like her. 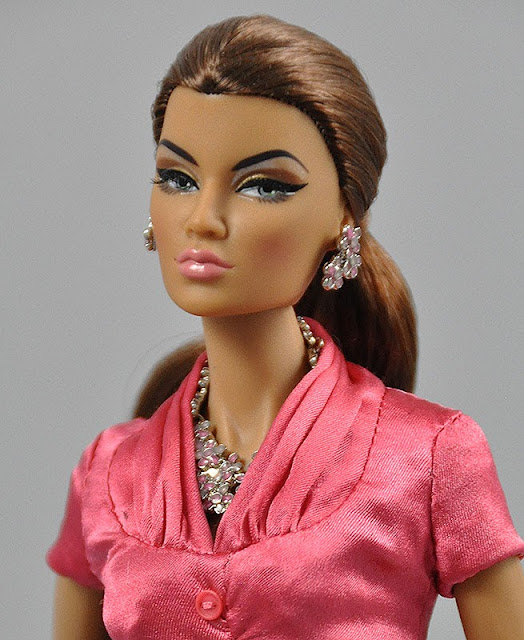 Fortunately, they made 700 of this version and it has had very lukewarm reception.  These dolls can be picked up nude on the secondary market for a very reasonable price.   With the recent news about the reitrement of the FR body, I will need several of the Korinne body to replace some of my older ones.

I recently took out Going Public Eugenia for a photo shoot and was shocked by how much her body had changed. 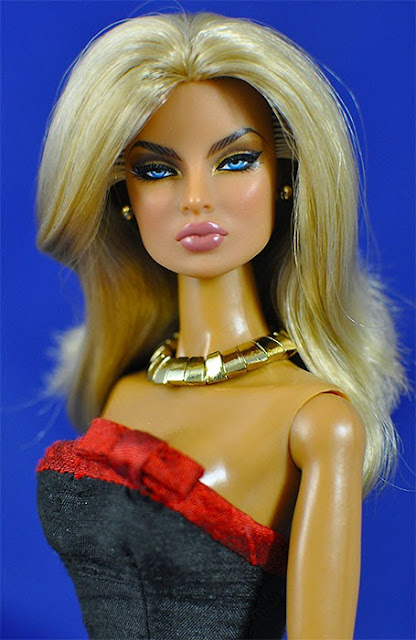 I got a second Korinne nude for a great price.  Now Eugenia is ready for more photos. 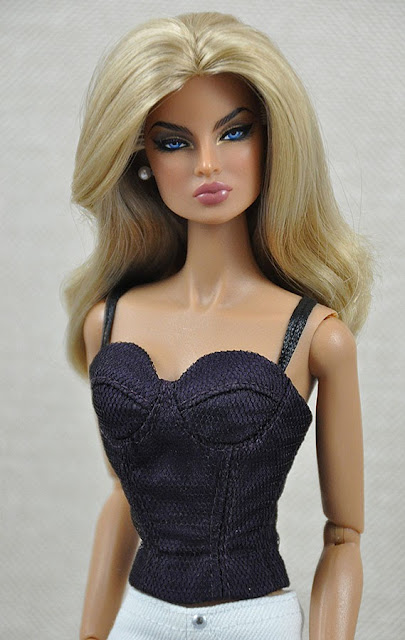 I purchased another for Paparazzi Bait Adele.  She looks so much happier now. 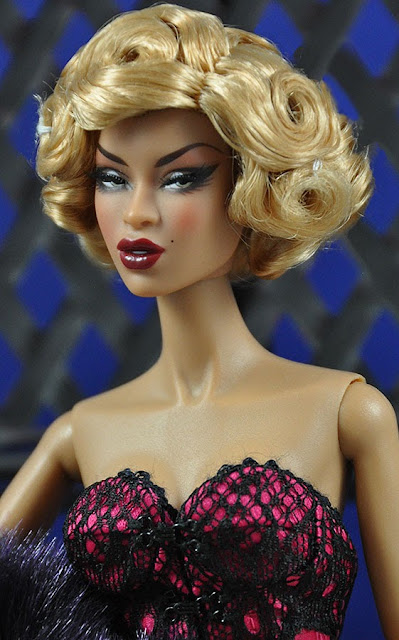 I also bought bodies for Glow Vanessa and Firefly Agnes.  When the bodies arrive, I'll show photos.    It's amazing how much a quick body change can make me love my older girls all over again!