Technology is a Funny Thing

As a teacher, I really have to keep up with technology.  Afterall, my students are usually way ahead of me!

One of the new programs our school has been working with students on is Animoto.  I decided to spend some time on it this week.   (I apologize that I didn't bother taking newer photos.  These were already in my photobucket and flickr accounts.)

Blogspot doesn't allow proper resolution for you to watch the video in full screen, but I hope you get the idea.   Here is the link to post in your browser if you would like to see it a little better - it still can't be viewed well in full screen:

Warning:  The video is accompanied by the explicit version of Keeps Getting Better by Christina Aguilera, so you may want to mute the video before playing.

What do you think?


Animoto is a free application on their site:  http://www.animoto.com

You can only produce 30 second videos in a limited number of formats.  For $30 (for one year) you can upgrade to full length videos - I have the $30 membership.  A further upgrade will let you produce HD videos.   It's more expensive but may be worth it if you share a lot of what you produce and want to watch the videos in full screen.

I think this is very cool and really wanted to share it with my followers.


Posted by Desperately Seeking Dolls at 12:59 AM 4 comments:

Confusion Is Nothing New

With the convention for the International Federation of Doll Collecting (IFDC) quickly approaching, I decided to blog about last year's IFDC dolls.

Integrity Toys has always been a huge supporter of the IFDC.  Midnight in Monaco was the convention doll in 2003 - ten years ago - which was only the second full year of Fashion Royalty doll production.  Many beautiful dolls have been produced for the IFDC, including some of my favorites: Diamond Dusted Veronique, Born to Gamble Kyori, and Dress Me Luchia.  Go Home Rayna from 2011 is one of the most sought after Integrity Dolls and was a huge hit with collectors.

At the end of 2012, I did a "Favorite 12 Dolls of 2012".  Two of the 2012 IFDC dolls actually made it on my list: Shake It Up Korinne (middle) and Rock Me Baby Rayna (far right).  Recently I was able to acquire Long Cool Woman Kesenia (far left) to complete the group.  Here is a photo of the three dolls together. 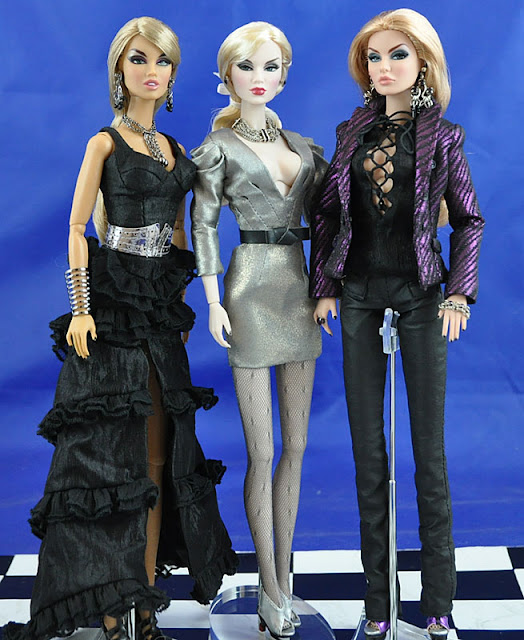 Integrity is very good about providing collectors with information about each version of every doll.   All three of the IFDC dolls are on the Victoire/Bride of Dracula body.  I love this body on Victoire because it allows her to wear my Vintage Barbie fashions, but I'm not a fan of using it on other dolls. 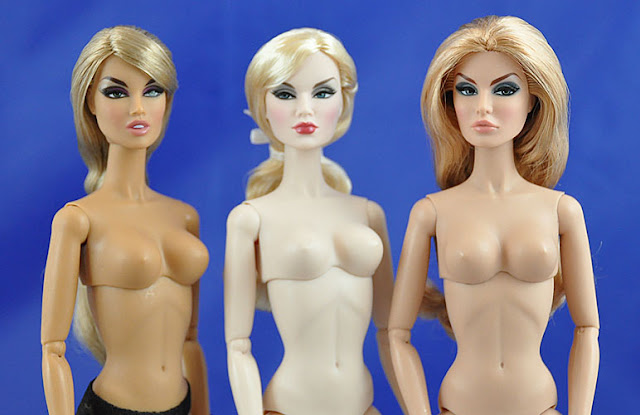 Unfortunately, Integrity's mixing bodies and skintones up makes my OCD hard to bear.  All previous versions of Korinne have been on FR bodies.  Her first issue was Easy Elegance in 2011.  She was sporting a tan body.  (She was purchased for her clothing ensemble and sold nude.)   In 2011, we also got four Convention versions that were used for a workshop:  Blonde on tan body; brunette, raven, and auburn hair on Caucasian body.  The 2012 Shake It Up Korinne is porcelain skintone.  She keeps changing body color!  And now she is short!  I went looking for an appropriate body donor.   This porcelain skintone has only been used on a few dolls, so it is difficult to locate donors.  I decided to buy a NRFB Follow The Line because I have wanted the outfit for a long time.  Somehow I wound up purchasing two (a fellow collector had offered to sell me one after I purchased one from a dealer).  Here they are redressed: 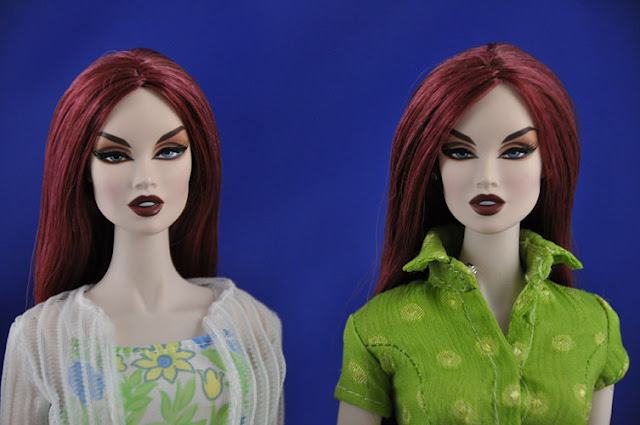 This allowed me to keep one (the one on the left) and body switch the one on the right.  Here is Korinne on the tall FR body.  A big improvement in my mind.

She is now perfect in my eyes and my OCD can rest in regards to Korinne. 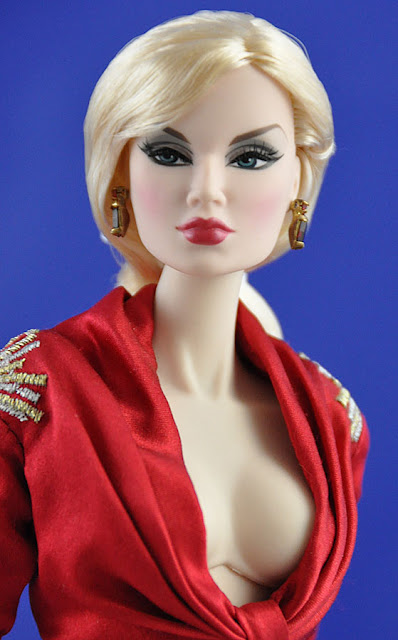 Now, let's move on to Kesenia.  I owned the first two versions of Kesenia, Hourglass from the 2010 Integrity Convention and Porcelain Beauty from 2011.  I sold both of them nude.  All the Kesenia dolls had been produced in the palest skintone (as explained above) until this version ... and now she is tan.  (The 2012 regular line Kesenia - Your Kind of Model - was released following the IFDC version.  She is not in the porcelain skintone.)  To further confuse things, Kesenia was actually a mold used for the original Brides of Dracula dolls.  All Kesenia girls have been released on the regular FR body, so she needed a body donor as well.   Unfortunately, there wasn't a tan doll here that I wanted to Frankendolly.  Anyway, I believe this version of Kesenia looks too young to have such a buxom frame, so I decided on a NuFace body that I already owned.

I prefer her on this body because she looks younger to me than her earlier versions ... but can my OCD handle this??  I hope so, because I think she looks HOT! 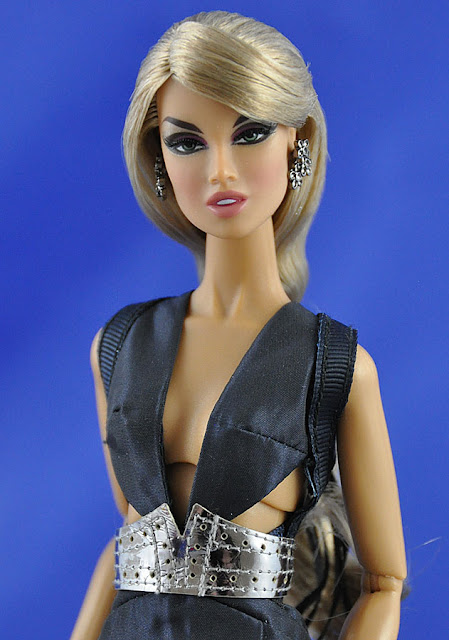 The previous versions of Rayna, Go Home (Caucasian) from the 2011 IFDC and High Toned (Tan) from the 2011 Integrity Convention are both on NuFace bodies.  This version of Rayna is just too sensuous for the NuFace body.  This doll just screams for the FR2 body which I just happened to have one lying around.  (By the way, thank you Matty for selling me this Hollywood Bound Silkie dress - Rayna LOVES it!)

WOW!  Now, that's an improvement.   But again, will my OCD allow this to continue? 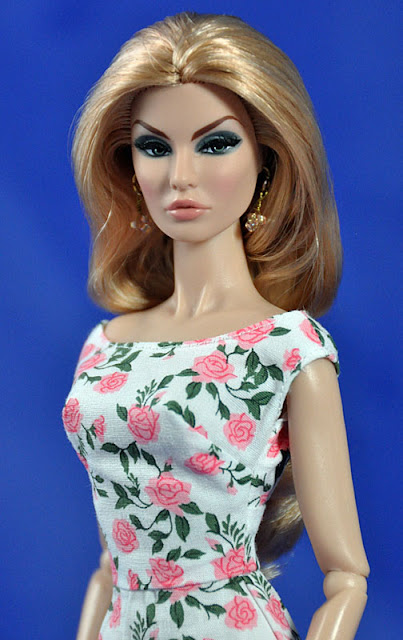 So, I took three dolls on Victoire bodies and changed them all.  Two of them wound up on bodies they aren't normally using.  Confused yet?  Maybe if I keep myself confused enough, the OCD won't know what is going on.
Posted by Desperately Seeking Dolls at 7:31 PM 3 comments:

Down the Rabbit Hole ...

I had made up my mind that I would no longer collect 16" dolls, with the exception of a few Ellowyne girls that I just can't bring myself to part with.   I have sold almost all of my Tyler and Sydney girls.  They have gone to great homes and are loved and cared for.  When the Tulabelle line debuted, I used my new phrase (thanks Reese), "These dolls are not for me at this time."

However, one of those dolls continued to nag at me - Pomp and Circumstance.  I love it when a doll company gives us something different ... maybe even a little odd.  This doll's hair and outfit is just too creative!  Then Shuga Shug's blog started posting actual production photos of her.   I could no longer resist.  I used my W Club discount coupon and went shopping.

Here is the what the presentation of Tulabelle looks like: 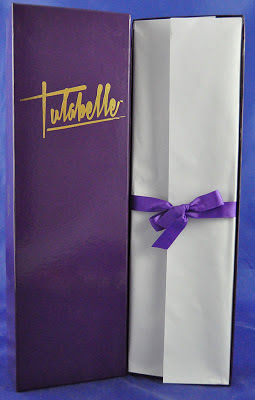 The box is purple with a lovely purple bow!  The inside of the top box has a cool graphic.

Here is the story... 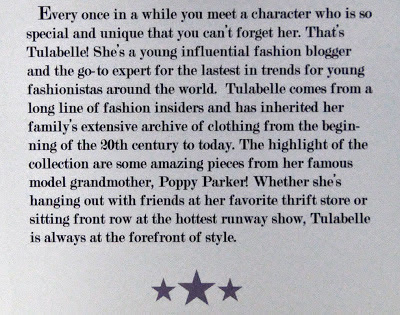 And this is what Ms. Pomp and Circumstance looks like in her box.

I love this faceup and hair. 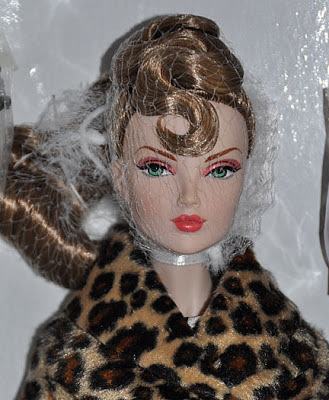 Here are the accessories.  First up is the jewelry and sunglasses.

Next, we have the purse.  It is so cute!  Love the little heart hang tag. 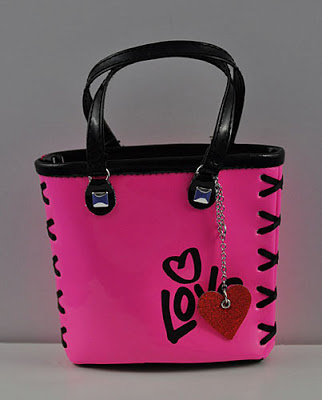 And she came with two pairs of shoes.  One is heels and one is flats.

This is what her foot looks like.  She has an ankle joint and then a foot joint that bends to allow her to wear high heels.  That's so cool! 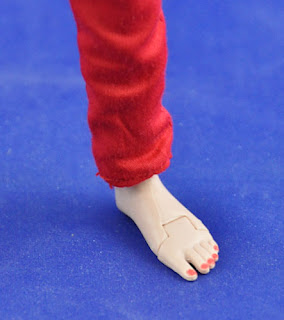 This is what she looks like right out of the box.

Here she is without the coat (which I totally love!!) 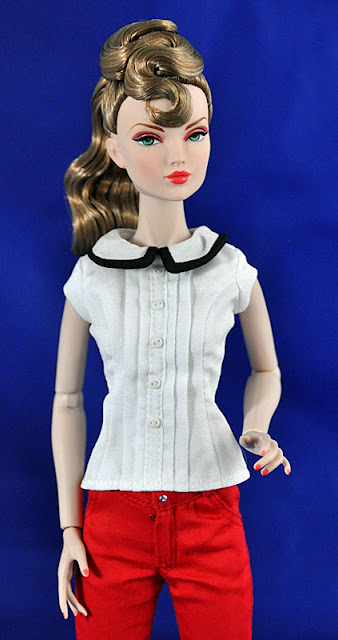 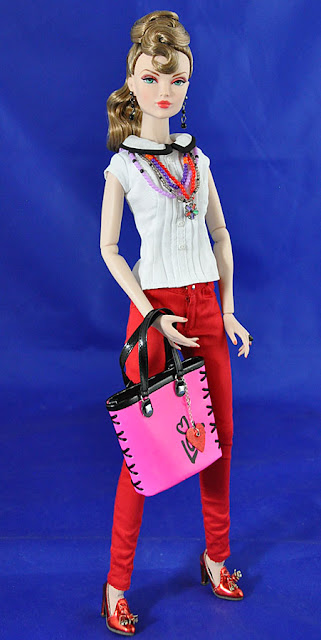 It was time to go through the closets for some redress opportunities.  How about Ellowyne? 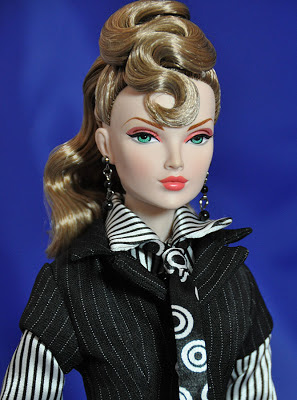 Then there was this outfit I found a long time ago at Tuesday morning on an "off brand" 16" doll.﻿ 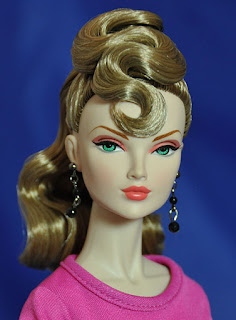 I wasn't satisfied with these choices.  So, I did some research and took off to e-bay.  Here is an Alex outfit called Cliff Walk. 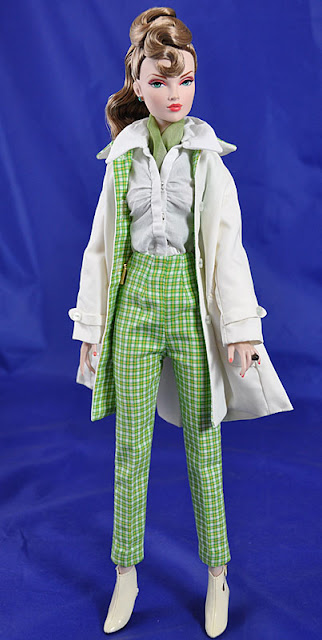 Even the shoes fit!  I love this color on her.  She's definitely found a home here.  Oh, no!  What have I done? 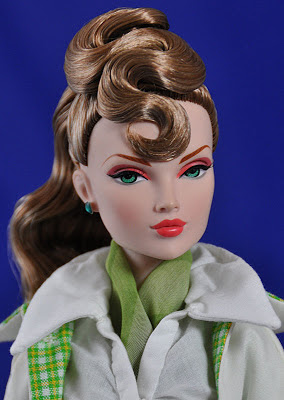 I used the money my mother-in-law gave me for my birthday.   I can't get over the spell this doll has cast on me!