The Drama of Eugenia

First, I have a funny story.  My husband and I visited a nearby town this past spring; we were looking for antique iron plant stands.  As we were driving through,  a mural on the side of a building caught our attention: 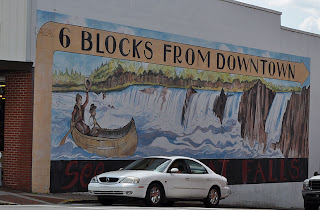 (The bottom says "See Great Falls")  We decided to come back to explore these when the weather got warmer.  This week, we loaded up the car with the camera and some wine, deciding to pick up some sandwiches on the way.

We went into the store where the mural was painted to look around because they had some beautiful Amish outdoor furniture for sale.  We asked about places to pick up a sandwich.  The sales lady was very nice and pointed us in the right direction.  My husband asked, "Will there be someplace nice to eat at the water?"

She looked at us strangely.  "There's a little area outside the cafe with tables and chairs."

We thought she misunderstood.   "We want to take the sandwiches down to the waterfalls," my husband explained.

She shook her head in comprehension.  "I'm sorry ... they made a movie here last year and painted that on the side of the building.  It looked so nice, we just decided to leave it up.  There isn't any waterfalls around here that I know about."

We were so embarassed; we hurried out of the store.  "The movie comes out this weekend ... it's that American Pie movie," she called after us.

So, if you go to the American Pie movie and you see this mural, you can get a little chuckle at our expense!


This week's photos were taken with architectural backgrounds to celebrate our mistake.  I thought a great way to help organize my dolls and get control of my collection would be to FOCUS on a different character each week.  Since I "found" Going Public again and love re-dressing her so much, Eugenia will be the first. 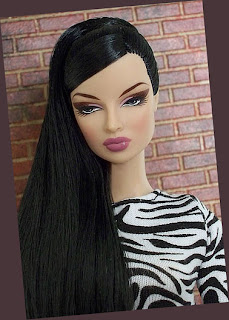 It was 2007 when Eugenia Frost first appeared in the doll world as Spectacular, Spectacular.  She was introduced as an FAO exclusive and was one of the most expensive dolls in the history of Integrity Toys because she was wearing a miniature version of an actual Jason Wu gown.  Her retail cost was $250.  Even with that price point, she sold out immediately and appears on many "Holy Grail" lists.  I was able to snag her nude, from a doll collector who posts on Doll Diva.  I paid $100 for her and was ashamed that I spent that much on a nude doll.  She does get a great deal of re-dress time in my collection.

There were three four more versions of Eugenia released in 2007.  Face Time was created for the regular retail line-up.  In Full Regalia and High Drama were convention dolls.  High Drama remains on my list of "most sought after" dolls.  She was a Table Centerpiece with only 150 of her produced and remains the smallest edition size for any Eugenia.  One of my followers, Gatsby, reminded me that Overachiever, a fiery redhead, and the only redheaded Eugenia, was also produced in 2007 as a dealer exclusive for My Favourite Doll in Canada.  I believe I left this doll off my list because I owned her at one time and sold her NRFB to a fellow collector.  It's a mistake I regret as I will never be able to afford to replace her with secondary market prices!  Thank you, Gatsby.

In 2008, Eugenia's popularity continued to soar.  Sporting a tan, she became the first "premium" doll for the W Club that year.  Going Public holds the record for the highest W Club edition size with 1300 being produced.  Even with this high number, GP is on many grail lists and continues to command a high price on the secondary market. 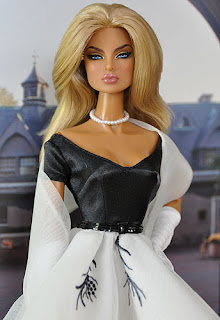 Another version made it into the regular retail line, Most Desired.  I owned this doll, but she has moved to another home.  The convention Table Centerpiece, Fine Jewel, is probably in the top 10 of best all time Integrity Dolls ever produced, with only 160 in the edition.  Raven hair and red lips is always a winning combination. 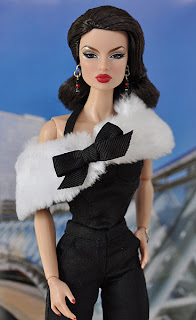 In 2009, Eugenia found herself as another W Club Exclusive.  Deconstruction Site picked up on the raven hair/red lips combo.  This time she had a mod asymmetric hairdo.  I decided to trade this doll with Kazue for Red Riding Hood Yuri.  (Since I own Fine Jewel, I thought I wouldn't miss her.  When I see fantastic photos of DS, I have sharp pain.)  Once again, Eugenia made it to the convention.  This time as Diamond Society.  I still haven't taken this doll out of her box.  Her presentation is so beautiful. 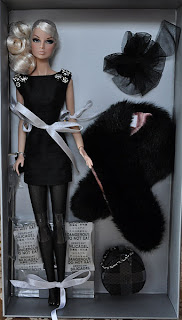 It seemed that Eugenia was one of the crown jewels in the Fashion Royalty crown.  Every version was sought after.  But we collectors are a fickle group.  In 2010, Eugenia tumbled from her high position among collectors.  Another W Club Exclusive, Spring Forward, was released to less than warm reception. (If you are keeping up, 1/3 of W Club Exclusives from 2007-2010 were Eugenia.)  After switching her head to a NuFace body, I finally bonded with this girl. 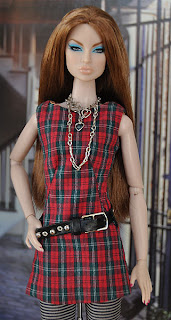 The main retail line presented us with a mesh of styles that collectors couldn't get behind with Tricks of the Trade.  The hair was kinked and tied in a severe ponytail; the outfit looked like something a street walker might go out wearing.  Her face up was very strong with eyelashes hooding her eyes.  It took some work, but I boil permed that hair straight and removed the eyelashes.  When she is redressed, I think she is an attractive doll. 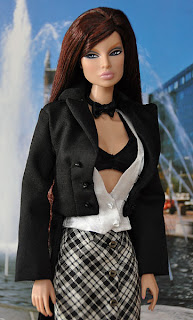 Other lukewarm receptions that year included two versions that appeared at the convention:  A workshop head used in a hair class and a dressed doll called Fine Romance.  The only doll collectors clamored for in 2010 was an exclusive Venus Secret.  This doll remains on my "would-love-to-have-but-will-never-be-able-to-afford" list.

In 2011, Eugenia continued to struggle.  The retail line doll, Pencil Me In, quickly became a clearance doll.   Fortunately, Integrity realized they needed to get back to Eugenia's roots.  The convention "build-a-doll" was Point of Departure.  She came in two versions:  a brunette and a redhead "helper" doll.  Both dolls were popular but suffered from poor wardrobe choices.  I have her re-dressed in my collection. 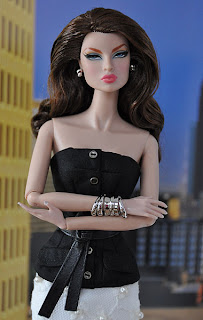 Eugenia has been unable to reclaim her popularity from 2007-2009.  Recently, Integrity previewed their 2012 Spring Collection.  Again, Eugenia is mish-mash of ideas. 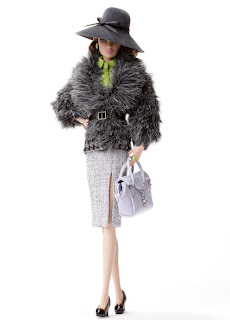 I wonder why Integrity is struggling so with this mold.  She was so perfect in her earlier versions.  (I believe the hair is rooted a little too low on the new one.) 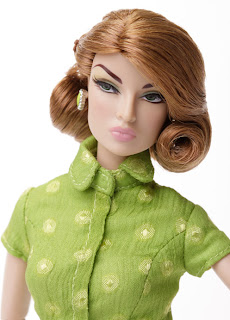 These photos were sent to members of the W Club by Integrity who owns the right to them.

Needless to say, I did not pre-order this doll.  Seven versions currently reside in my collection.  They will have to work hard for me to include another in this group. 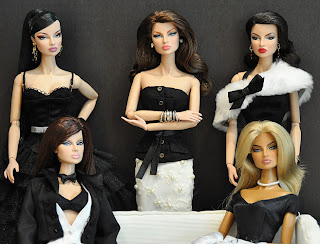