First, I have to give praise where praise is due.  I have already received the replacement dress for Reigning Grace Eugenia Perrin Frost.  It came a couple weeks ago, and I finally took it out and put it on Eugenia.  The hem is perfect.  It makes me very happy when a problem is corrected quickly and easily. 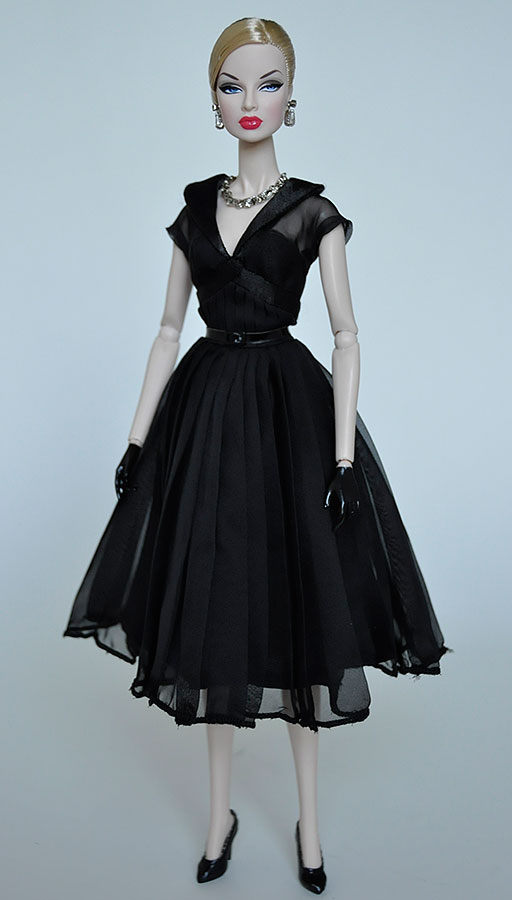 As much as I like Reigning Grace, I don't think I would've purchased this doll had I known that Julia Leroy's winning design doll from 2014 would be produced with a similar Eugenia.  Here's a closeup of Reigning Grace.  She was a W Club Exclusive from the 2015 IT Cinematic Convention. 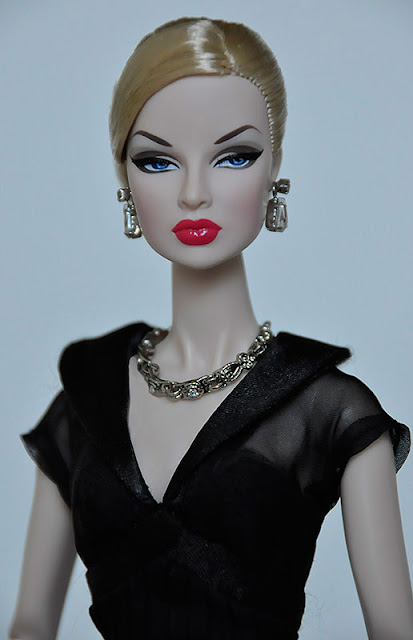 And here is a closeup of As Dusk Falls that arrived a couple weeks ago.  I haven't deboxed her yet because I keep waffling back and forth, trying to decide whether or not she is going to stay. You can see the two dolls are quite similar; they're just looking opposite directions;  As Dusk Falls has longer hair and the two are different skin tones. 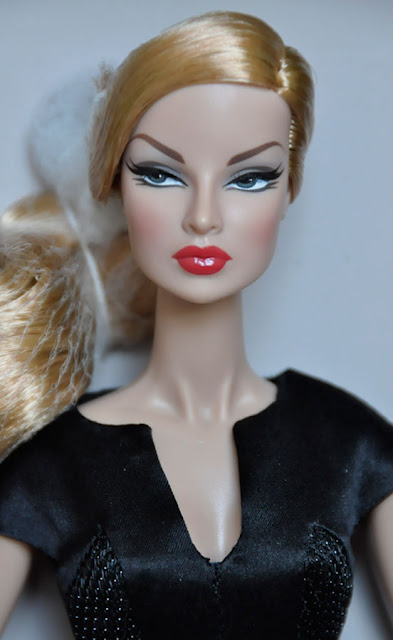 Since we are looking at blonde Eugenia versions, here's a photo of 2014's City Prowl Eugenia.  She's never been out of stock.  Even though I don't care for the sheer skirt (I'm gonna line that someday), I do love the whole look of this doll.  She is another dark blonde Eugenia; this time with centered, brown, eyes and without red lips. 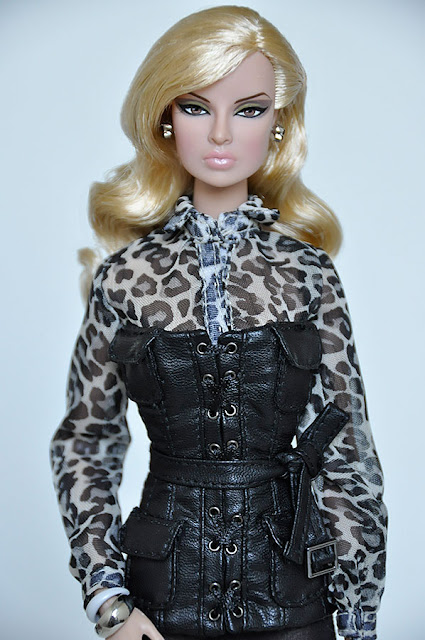 The FR2 body has been consistent with Eugenia Frost since 2013.  My favorite blonde version of Eugenia is After Tonight Eugenia Frost from the 2013 IT Premier Convention.  This time, she goes platinum with an elaborate hairstyle, bleached eyebrows, and green eyes.  This doll is just perfection; she's never been taken out of her gorgeous evening gown. 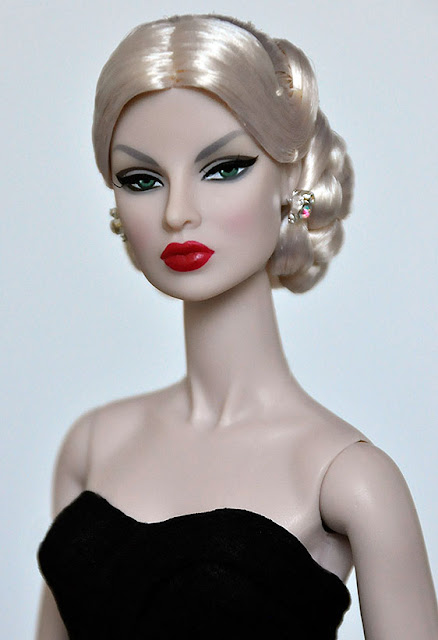 IT definitely likes their Eugenia blonde!  She showed up blonde at all three of the last conventions.    Here she is from the 2014 Gloss Convention, Cold Shoulder Eugenia Frost.  I've still not removed this from the box either.  Are you confused yet?  That's four blonde Eugenia with red lips in three years. 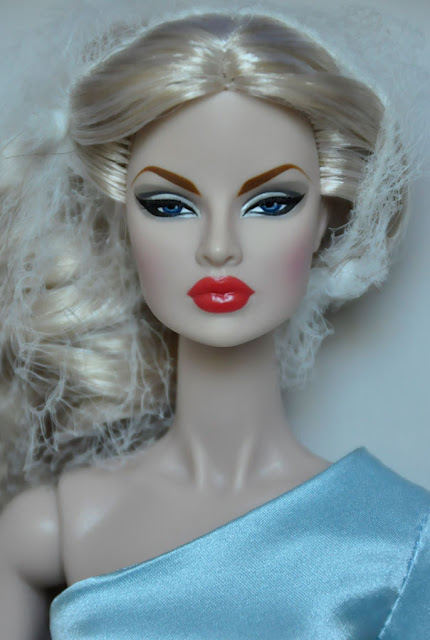 Since 2013, when it announced that Eugenia Frost was one of the "core eight" dolls that would make up the FR2 line, collectors have received eight versions.  In addition to After Tonight (which was a table centerpiece), there was 2013's Premier Convention Bittersweet Eugenia Frost.  This doll definitely looks bitter to me.  Maybe it's because she hasn't been released from her box yet.  She has red hair, violet eyes, and pink lips. 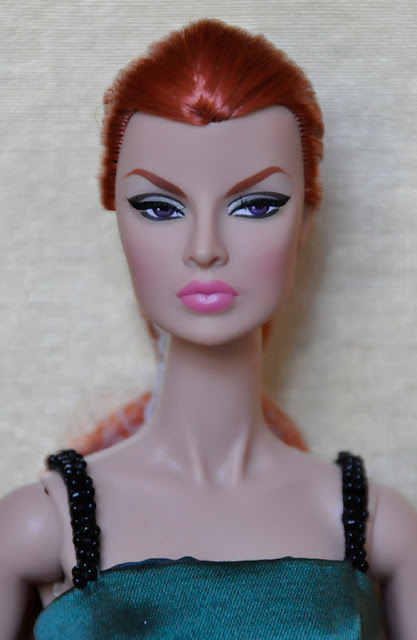 In 2013, we also got a W Club Exclusive, A Touch of Frost Eugenia.  For some reason, I've always liked Eugenia with dark hair. 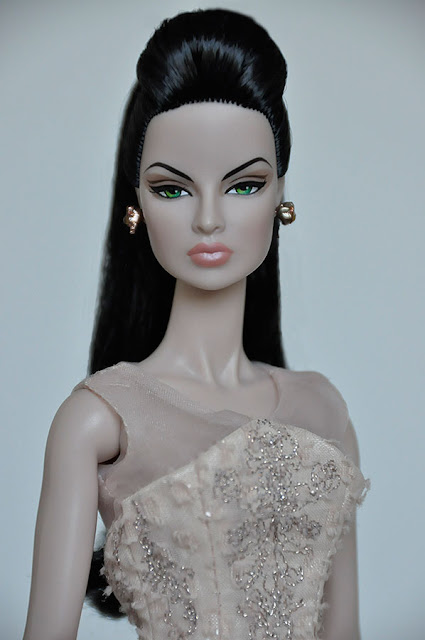 Last year's mainline doll was Decorum Eugenia Frost.  She's still NRFB because I think she will be sold soon.  I'm not very fond of this face up. 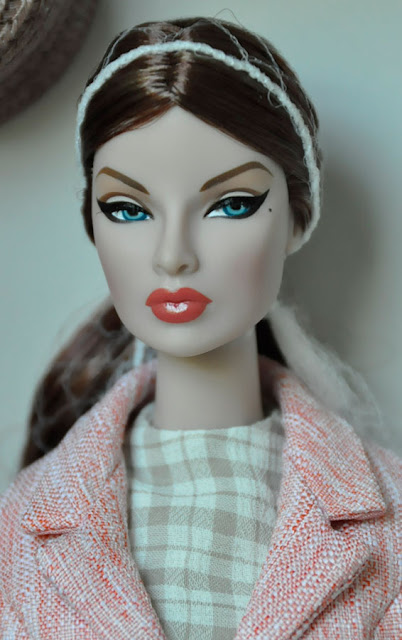 After taking out all of my FR2 Eugenia versions to photograph, I began to realize how much more I preferred the earlier Eugenia's.    I fell in love with Eugenia from the very beginning.

I couldn't afford this doll on secondary market NRFB, so I found one nude at a great price.  Here is the exclusive 2007 Spectacular Eugenia Frost.  (Redressed in photo) 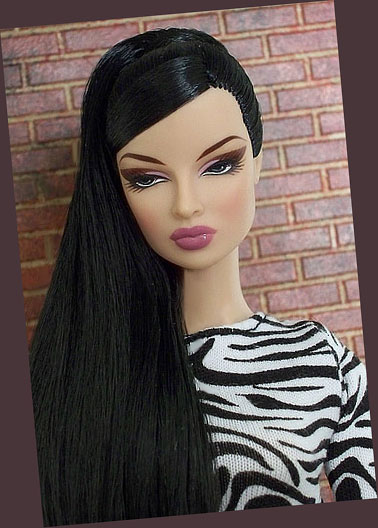 Then there was 2007's mainline version, Face Time Eugenia Frost.  (Redressed in photo) 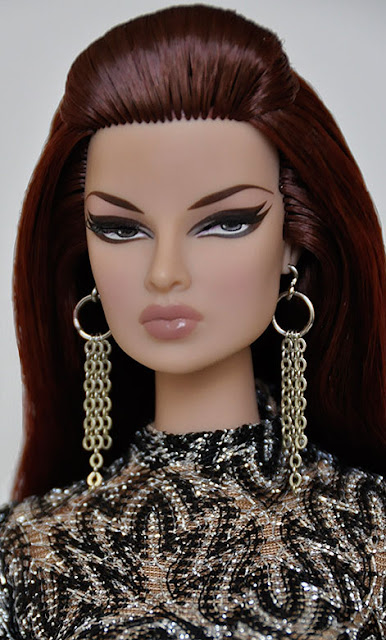 There were two who showed up for the 2007 IT Convention The Royal Life.  First up is In Full Regalia, who I found last year NRFB for a great price.  Unfortunately, I've not had time to enjoy deboxing this girl. 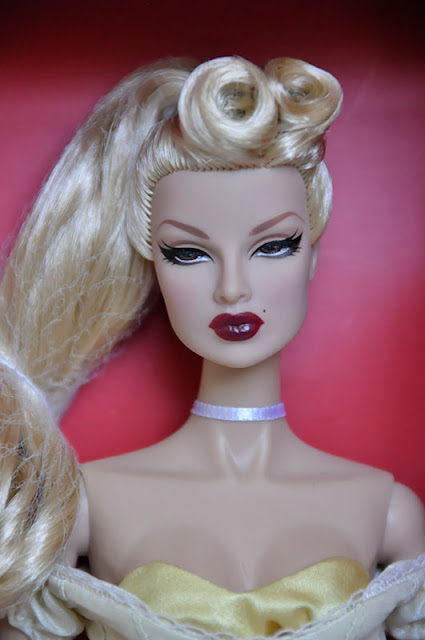 Then there was one of my grail girls, High Drama Eugenia Frost, that took me forever to get.  (I've never owned 2007's MFD exclusive Overachiever, so she isn't pictured.) 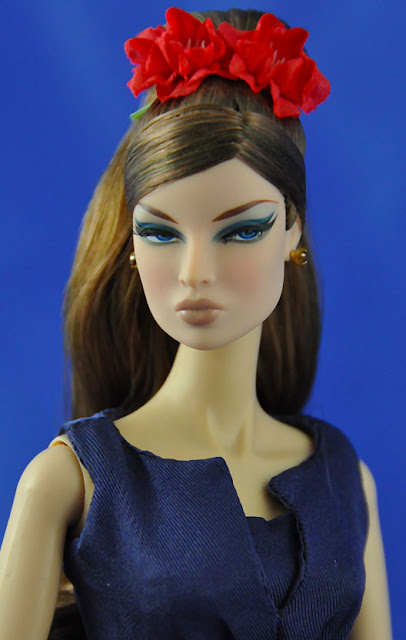 In 2008, the W Club gave its members the most sensual doll ever produced by IT (in my opinion).  I'm writing about Going Public Eugenia Frost.  One of the most valuable on the secondary market and difficult to get, even though the edition size was a whopping 1330. (Redressed in photo) 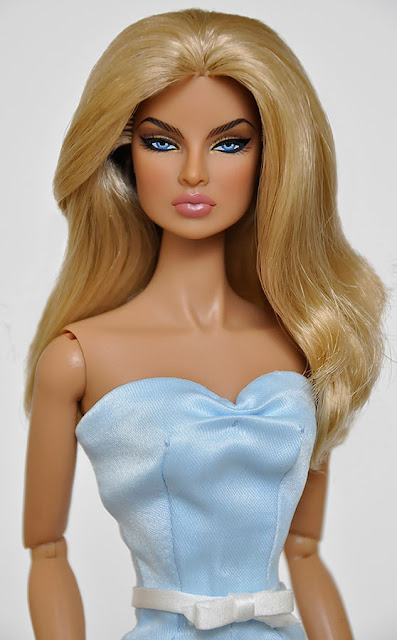 In the mainline, we got Most Desired Eugenia Frost.  (Redressed in photo) 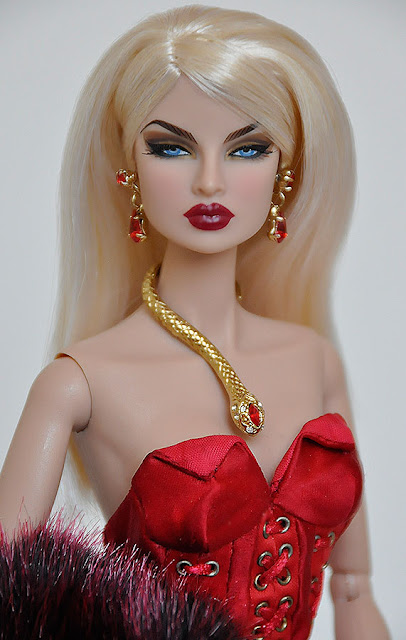 And Fine Jewel Eugenia Frost (my personal favorite of all versions) was a table centerpiece - edition size 180 - at the IT Heist Convention. 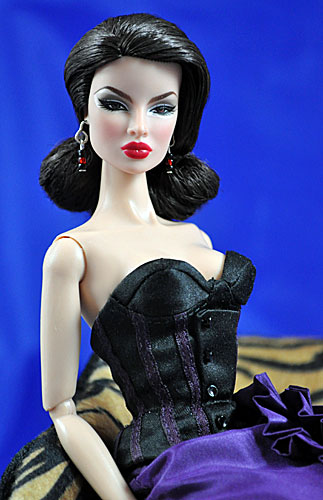 It seemed that Eugenia Frost was quickly becoming a very popular mold.   I foolishly traded my 2009 Deconstruction Site and am still trying to find one at a reasonable secondary market price! But I did manage to snag a NRFB Diamond Society from the 2009 IT Iconic Convention.  I haven't brought myself to take her out yet either. 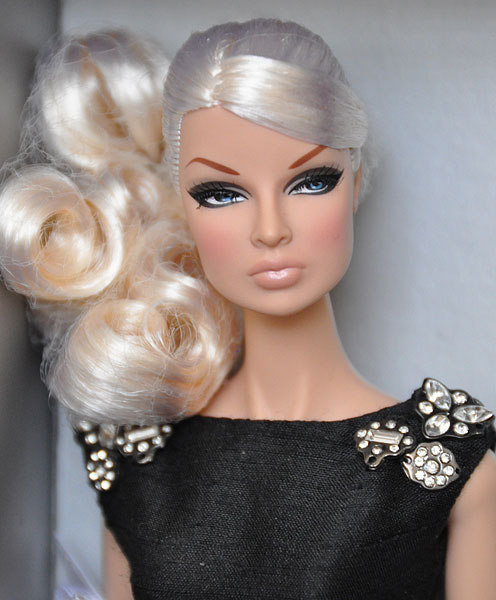 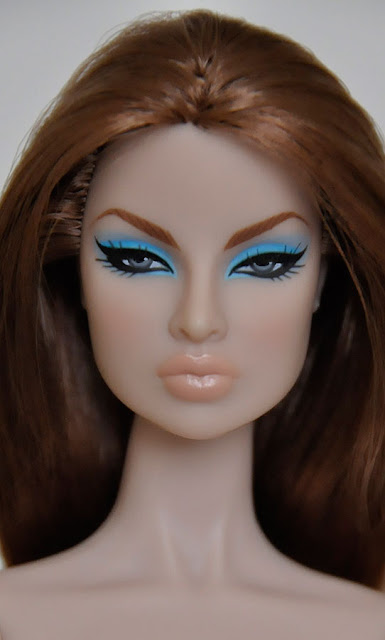 And the most difficult to acquire, Venus Secret Eugenia.  I keep saying I'm going to release this girl. 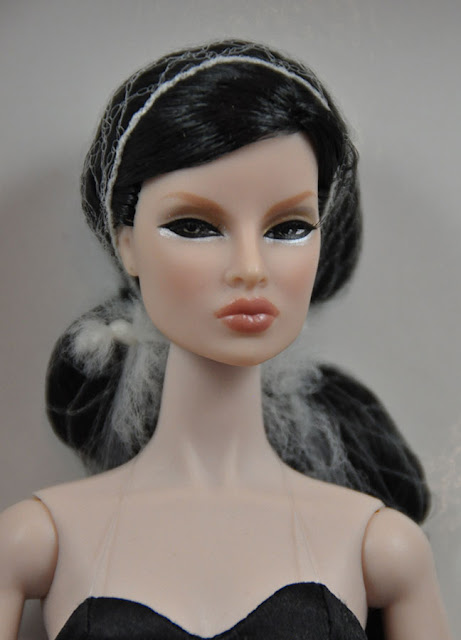 I found a new home for Tricks of the Trade: 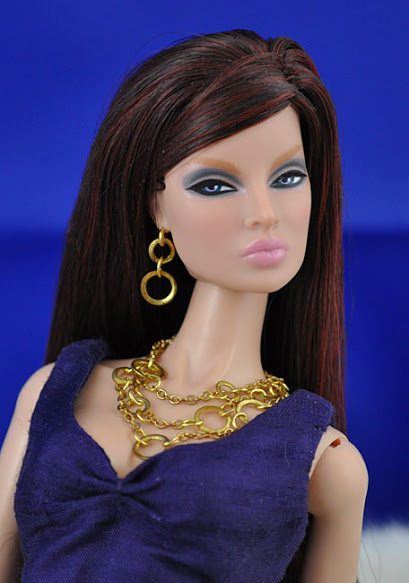 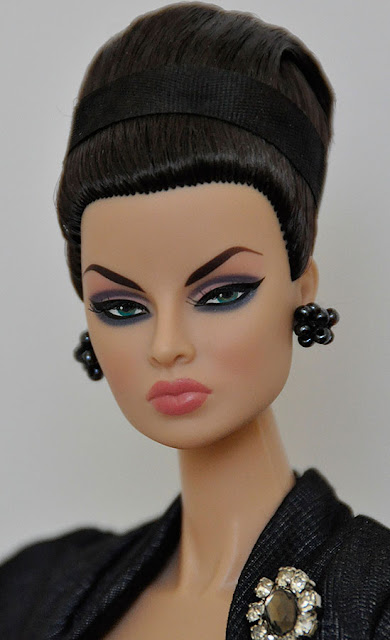 However, I couldn't resist the Hair Workshop Version. 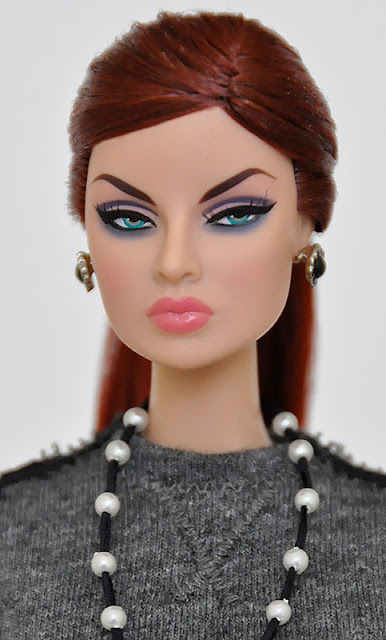 The only version in 2011 was the gift set doll from the IT Jet Set Convention, Point of Departure Eugenia. 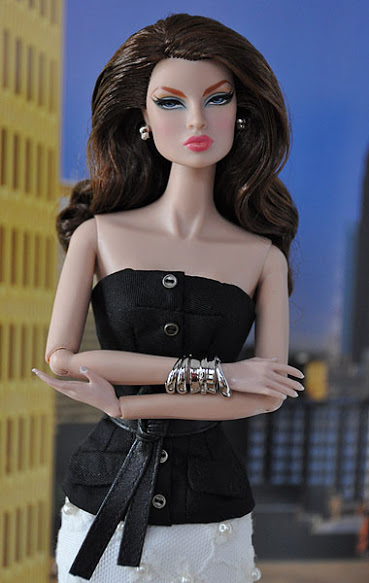 I opted to let this one go in lieu of the helper version with strawberry blonde hair.  (Probably in my top 5 Eugenia dolls living here.  She is exquisite!) 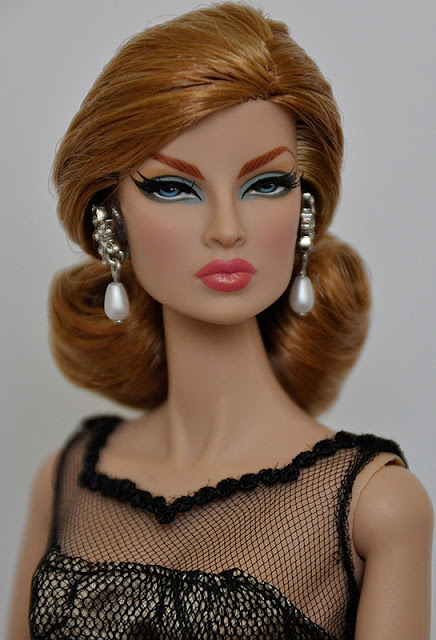 In 2012, we got World on a String Eugenia.   Since I had acquired the Helper Point of Departure, I decided to re-home this girl.

The final Eugenia released on a regular tall body was High Profile Eugenia.  For some reason, I was never able to bond with this doll and sold her as well. 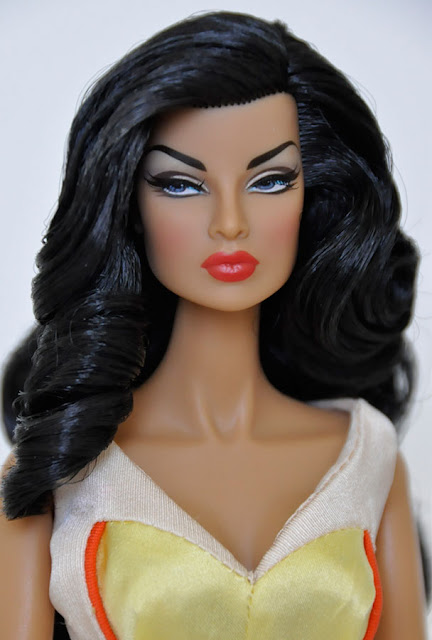 If you've been keeping track, I still have 20 versions of Eugenia living here, seven are NRFB.  Even though I've been able to let six go to other homes, I struggle with trying to lower my number of Eugenia dolls.  When I look at High Profile I get a small pang of remorse, but I just don't have room for all of them.

If I had to choose my favorites, I could only narrow it down to my top 7:

I was surprised that only 1 doll in my top 7 is FR2.  I would love to hear from my readers.  Who is your favorite?