Today was one of those days when you should just stay in bed.  I left home early because I needed to stop and pick up juices for my class's end-of-the-year celebration.  I always listen to the radio for traffic news.  The traffic report said that the exit above the one I use was shut down due to a truck fire (hazardous materials) with the interstate being closed just below the exit.

That exit is three miles north of mine, so I thought it would be alright.  Afterall, it was 5:30 a.m.  The next traffic report said the truck fire had started at 3:00 a.m., and the traffic had backed way up the interstate.  The following report advised people on the interstate to take certain exits and use a side street up to my exit to get back on the interstate.

Knowing the patterns and roads as well as I do, I still felt confident I wouldn't experience much delay.  When I got to the exit ramp, it turns out that my exit was the one actually closed!  It took me an additional 45 minutes to get to work ... only I didn't get to work.  (BTW, about halfway there the traffic reporter announced that the exit I use was ALSO being affected!)  My car started acting up, and I had to take it to the garage next to the school.  All this time I was sweating bullits because I have perfect attendance this year (which is a remarkable feat for an elementary school teacher, since we come in contact with every germ known to science).  Fortunately, a friend came and picked me up and we got to school on time.  Only 3 more days to go!

This morning I got another call from my ex-husband who wants me to do him "a favor" because he is re-financing his home (the home I helped him get, decorated, and helped pay for).  The same man whose girlfriend moved in after I moved out and told him he could no longer have contact with me, including helping me in any way.  All of this, after we had a very amiable divorce since he told me that he would always be there to help me in any way he could.  Now HE needs a favor.  Get in line buster!

It turned out the new battery installed in my car had gone bad.  Fortunately, the repair was free.  However, my brakes were gone (which had been serviced last summer).  I knew there were problems, but the mechanic who serviced them swore it was my imagination and refused to do anything about it. So, I let my regular mechanic take care of it to the tune of $450.

When it was time for my pizza party, I found out that the pizza delivery guy was running 2 hours late.  So my pizza party was delayed until the end of the day.

I had to get my car tag renewed after work.  The line was horrible.  Then, when I got home, we had a storm and my satellite TV went out.  Naturally, tonight is the season finale of American Idol - the only show I watch during the week.

So, I play with dolls.  That's one of  my excuses for enjoying this hobby - a day like today.  I can take the things I purchased at the doll show on Saturday and redress my girls.  I can escape my frustrations and be taken away from it all.  It relaxes me and comforts me.

First up is my favorite Barbie wearing the Frank Sinatra outfit I got. 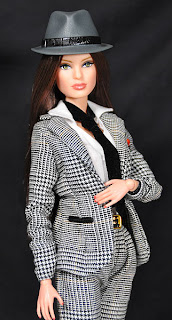 I really think she looks great in this.   (I tried it on Victoire first, but the shirt wouldn't snap!   Oh, those well-developed 40 DD's!)   I took the Frank Sinatra pivotal body and gave it to a Grace Kelly doll.  (Photos to follow).   The head will be put on another body and sold.

Since Exaggeration is my current favorite doll, she had to get something, too.  I decided to see how she would look in the Vintage American Airlines Stewardess outfit.

I really don't think there is anything that she cannot wear successfully.  I simply love this doll.  Especially those big, bee sting, silicone-enhanced lips! 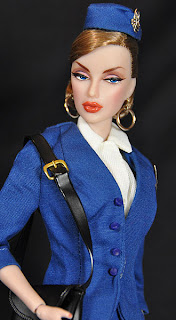 A little redressing, a little photography, a little blogging.  A whole lotta rest and fun.  I think I will be able to sleep tonight.  After such a day, I dare anyone to question why I play with dolls.  I hope this hobby brings you the joy, pleasure, and relaxation I experience!

After my recent shopping spree (which will be the topic of an upcoming blog), I decided it was time to exercise some self-restraint.  Unfortunately, there was a big doll show in Atlanta this weekend.  I set out with a specific budget in mind.  In addition, my husband and mother-in-law each told me to purchase something for my birthday from them at the show.  So I decided to only take $200 of my own money for spending.

Here is my haul: 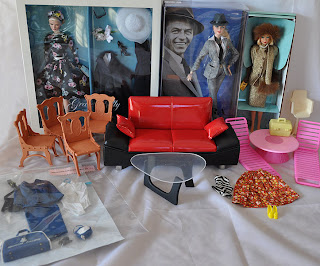 I always go completely through the doll show once and then back track to make purchases.  I missed one item I really wanted by doing this, but it would have really hurt my spending anyway.  It was a vintage, NRFB Cara Barbie.  The seller was asking $125 for her and I knew I wouldn't get much more if I spent the majority of my budget on her.  The dealer didn't take plastic, so Cara couldn't come from my husband.

The purchase from my husband was the Grace Kelly "My Romance" Silkstone giftset.  I got it for $59.  I thought that was an extraordinary deal.  My dolls are waiting impatiently to get hold of these outfits! 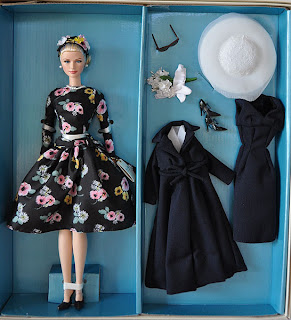 A very nice dealer whom I had purchased from previously (and she even remembered me) had the retro sofa and coffee table from the 2010 Barbie Convention for sale.  She knew that I played with my dolls and photographed them.  She gets all excited about how I enjoy my collection and doesn't mind giving me a good deal.  ("I'd rather sell to someone like who gets so much pleasure from your dolls than selling to someone who will put it on ebay and make money on me!")  She lowered her price and let me have both the coffee table and the sofa for $45.    I knew I could get some diorama mileage on this, so I was on my way. 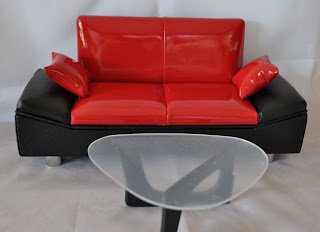 After Jurrie posted photos of Victoire Roux wearing the reproduction Gold N Glamour outfit, I had been on the hunt for this ensemble.  I found a collector/seller who had one NRFB for sale.  I got it for $40.  Couldn't pass that up!

Can't wait to get that on one of my girls!  You'll see the doll for sale soon.  One of my followers asked me where I sold items ... I sell strictly on The Doll Page Show and Sell Site.   I sell reasonable and my items usually go fast.  I sell under my first name "robyne".

I had been looking for some vintage outfits, and one of my bestfriends had set up a booth.  She gave me the "bestfriend discount", so I was able to land this minty and complete American Airlines Stewardess outfit for $40.  It's an outfit I've had my eye on for some time. 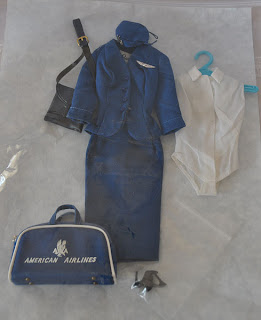 I found several other great vintage items.  I passed on some wonderful Mint In Box Barbies (I was sincere about that budget!).  Another seller had several very nice outfits.  I only purchased one vintage zebra bathing suit, a country fair skirt, and a pair of yellow pilgrim shoes.  I got all three pieces for $15. 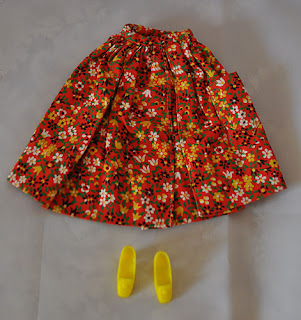 I also found some odd plastic furniture I thought I could use in various scenes.  It was only $10.  A little girl was selling it to buy some summer clothes.  I couldn't resist. 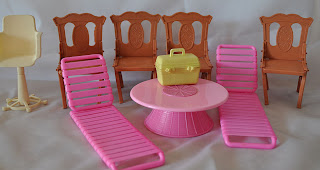 That brought my total to $150.  I knew I needed some more Kaiser stands.  A lady was selling them for $1 each or $11 for a dozen.  I purchased two dozen of them.  She also had two black stands.  I got those as well.  That was an additional $24.  I still didn't have a gift from my mother-in-law.  I have been wanting this Frank Sinatra Barbie outfit.  I had seen the doll at Tuesday Morning for $19.  The cheapest I saw it at the show was $29.  I stopped by Tuesday Morning's on the way home and picked it up. 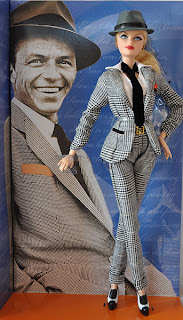 I was pleasantly surprised to find that it has a pivotal body.  I still have enough money left to go back and get another one!  I'll be doing some Frankendolly work on a "Frankie" Barbie.  How strange!

This was the first show I attended without a friend in tow.  I spent less money than I planned (and even the gifts were reasonable priced!).  Maybe friends are a bad influence at a doll show!  Surely, no one can accuse me of that.  I know at least three who would totally disagree with that statement!