New Year's Resolution Number 1 - Become better organized, so I can make good decisions about which dolls stay and which dolls leave for homes with other collectors.

I saw that some individuals I follow on Flickr had designed pages of all their dolls.   I thought that was a very cool idea.

I was halfway to being able to complete this organization because my husband had already suggested that I make all of my dolls nude, so I wouldn't be influenced by their clothing in choosing which ones to sell.  I still have several dolls in boxes, so their head shots have a the backgrounds from their boxes.  I did include the regular FR characters that were presented at the 2013 Convention on FR2 bodies since they already had a character history attached.

I decided to group them according to character.  The first two characters were introduced in 2001/2002.   Veronique was the first FR doll I ever owned, which I purchased in 2004; she was Flame Rouge. 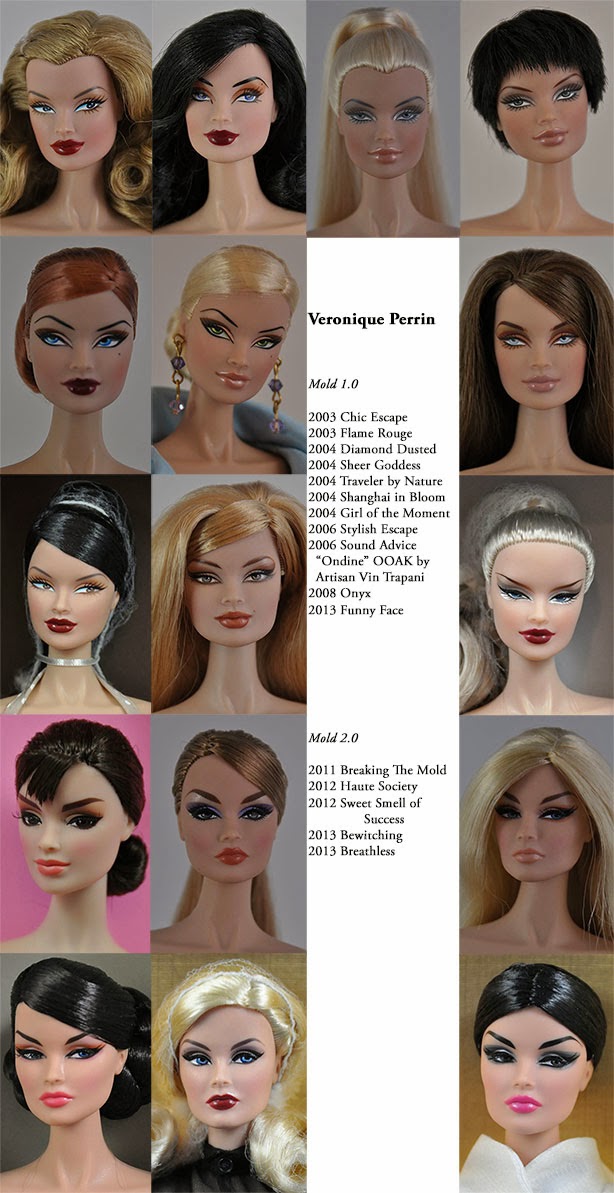 Released with Veronique Perrin was her best friend Adele Makeda.  Although I have owned a couple Adele dolls with the first Mold, I've never liked the mold.  I started my collection of Adele with Graphic Language. 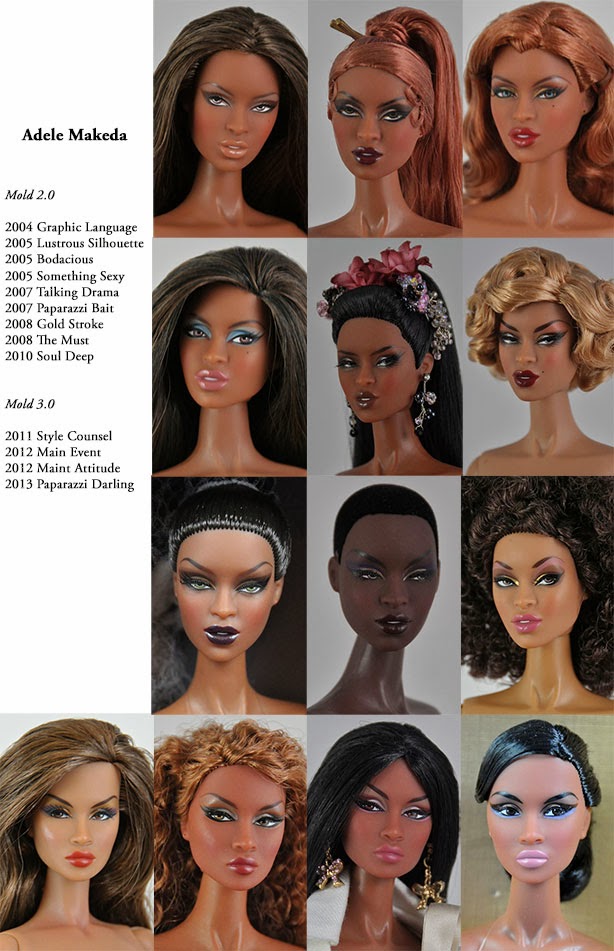 In 2004, Integrity Toys introduced two new molds.  It turned out that Veronique had a sister named Vanessa.   Vanessa 1.0 is one of my favorite molds.   You can see why. (Current Pursuits and Dress Code are switched in the list.  Sorry!) 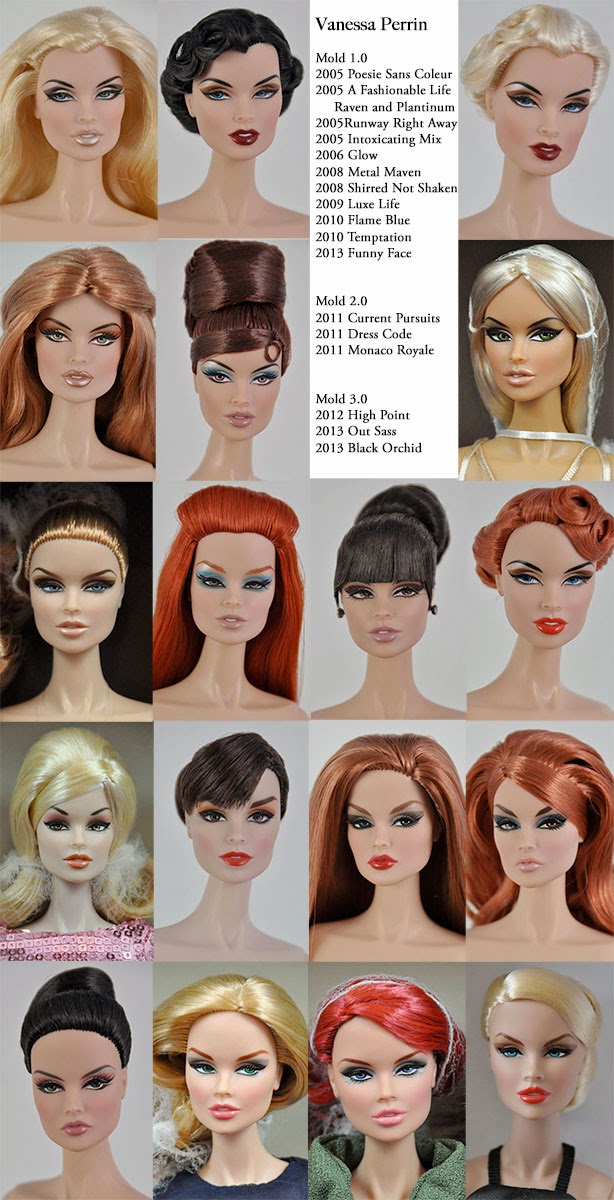 We also learned that Veronique had an enemy.   Kyori Sato was not to be trusted. 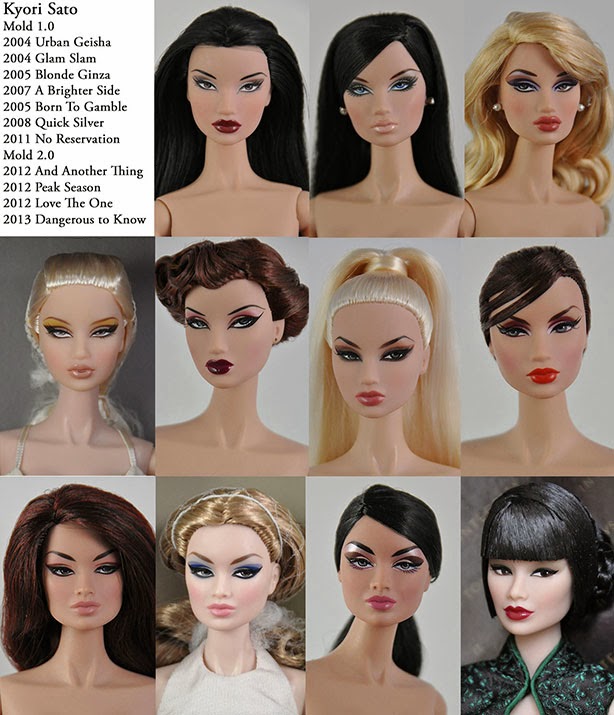 She worked for the evil Natalia Fatale! 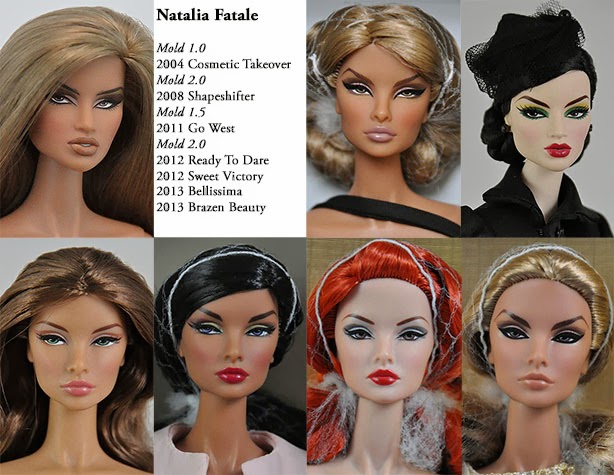 Another character introduced in the early days of Integrity Toys was Isha.  She was released on a taller body as two characters - she remained Isha on the taller Indian body but became Luchia Z with Caucasian skin tones. 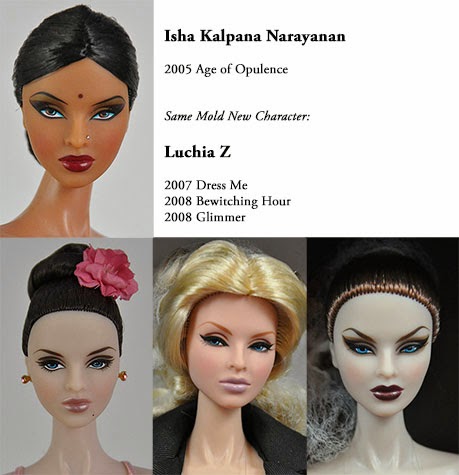 In 2006, Integrity Toys changed the bodies of their dolls and improved articulation significantly.  At the chagrin of many collectors, it involved increasing the height of the dolls by .5 inches.  We got another personal favorite character that year, The Baroness Agnes Von Weiss.  This dolls serves attitude with a side of disdain. 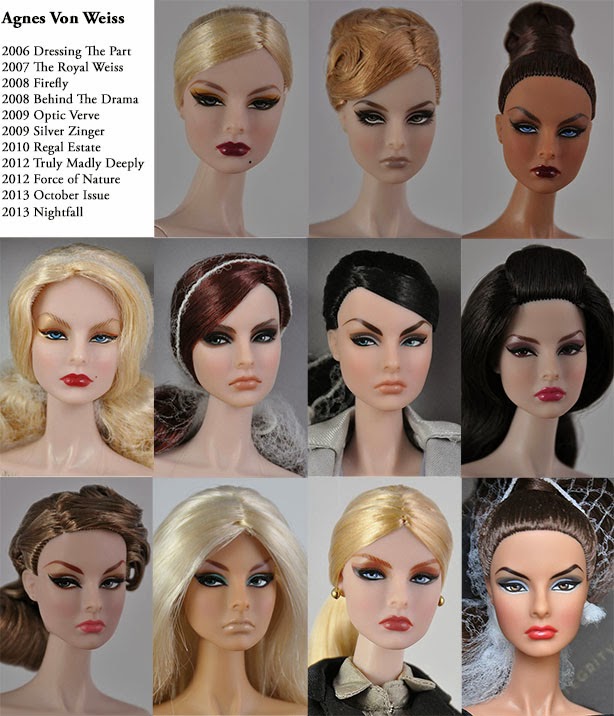 The only other doll I have collected en masse is Eugenia Perrin Frost.   She is my very favorite of all the characters/molds and was introduced in 2007. 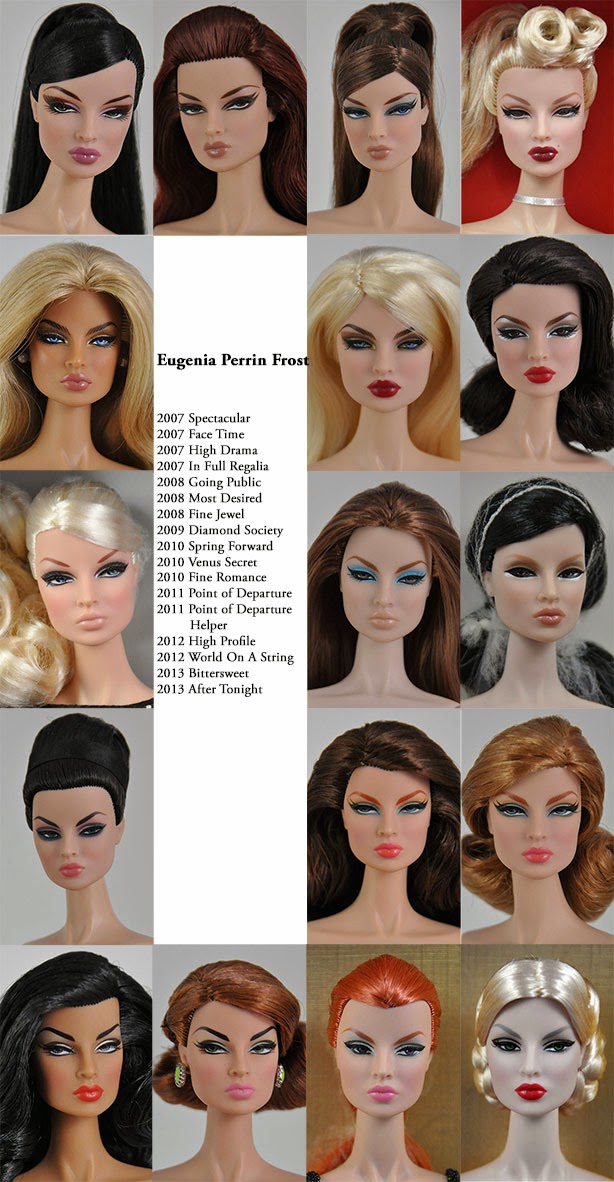 2008 was a strange year for collectors.  Integrity Toys introduced the Hollywood Royalty Line with a Lana Turner doll.  The mold was not well-received as collectors complained that it looked nothing like Lana Turner, so back to the drawing board and second mold.  The original mold became another character called Tatyana the same year.   The second mold, though better received, still did not sell well and became a third character, Dania Zarr.  Talk about confusing! 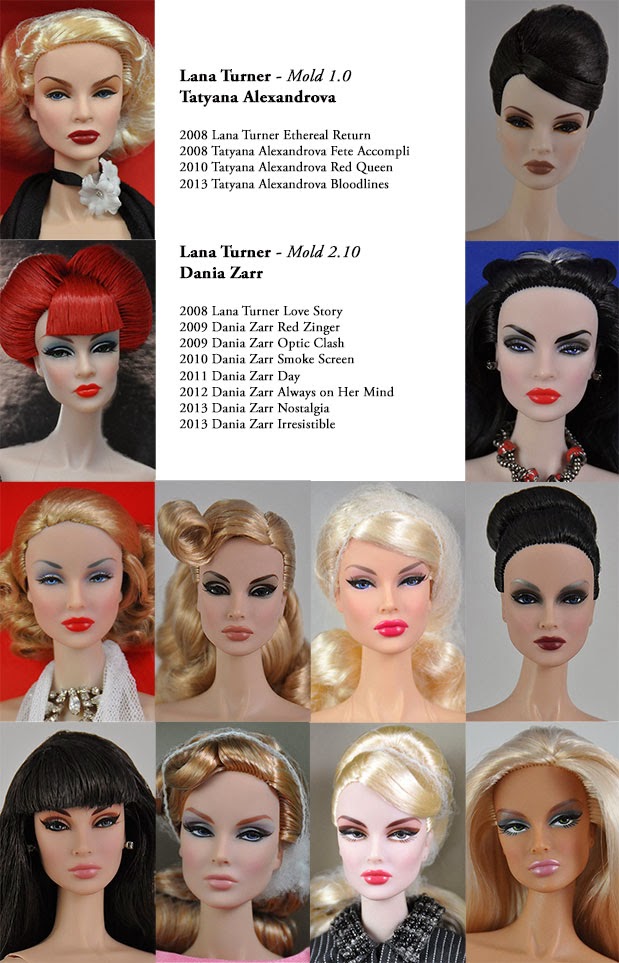 In 2009, collectors got two new characters.  First up was a new African American doll named Jordan.  The other 2009 character, Elise Jolie, was never released again as a FR doll.  She is, however, very popular in the FR2 line.  Also in 2009, IT also added another doll to their Hollywood Royalty Line, a mini- Gene Marshall.  I don't believe this line was fully realized as the dolls were so incredible and line short-lived.

In 2010, we met Kesenia  and Anja at the Integrity Convention.  Both dolls improved in future releases.

In 2011, we added Korinne and Rayna.  Rayna has appeared as both a regular character and a NuFace character. 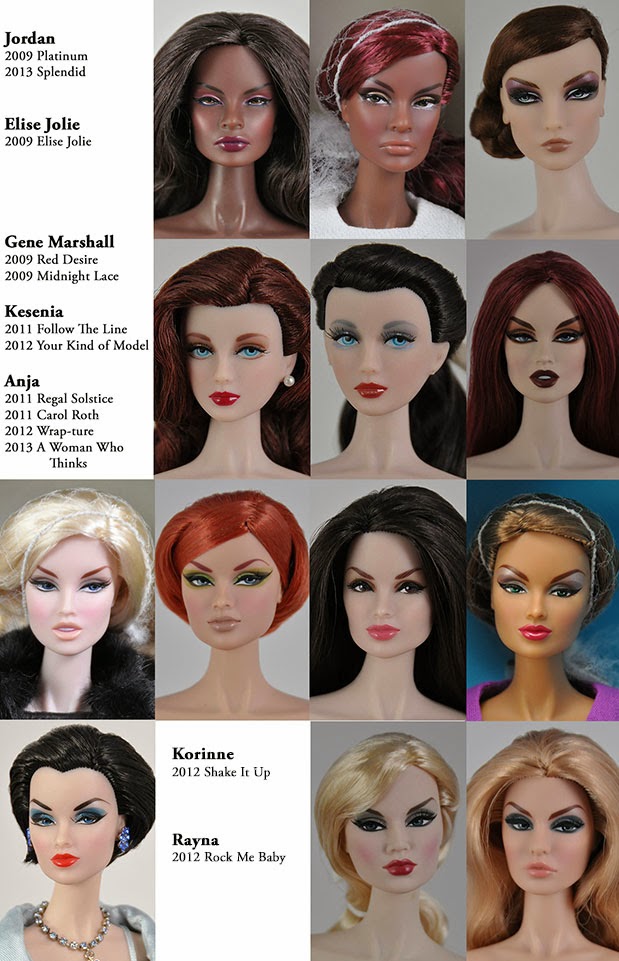 So, have you been keeping up?  (Remember I am not including FR2, NuFace, Poppy Parker, or Dynamite Girls)  If you wanted to collect just one of each character mold in the FR line, you would have 29 dolls!

I have 122 FR dolls in my collection.  The scary thing is that I have sold 60 over the past few years.  My goal was to cut my number down to about 75.  I'm not sure how that would be possible.  They are all so lovely!

I've never had a tie on my "Best of" list before, but there's always a first!  And, in this case, the tie is actually for first place.  I waffled back and forth for several days when I was doing my Best of 2013.   Finally, I came to the conclusion that I just couldn't decide between these two dolls.  Since I had a "non-doll" (the Mattel Wardrobe) holding a spot in the top 10, that still meant only 10 dolls are listed.  (Isn't it amazing how we can justify things!)

First up is the best ever, in my opinion, Integrity "Convention Doll".    Hands down.  No argument.  Engaging Elise was on my list of most wanted dolls for two years.  She always sells for ridiculous secondary market prices, so I had given up hope of ever owning her.  I guess I don't need her now.  I was so excited when my friend texted me the photo of the Jason Wu Convention X doll - Midnight Star Elise. 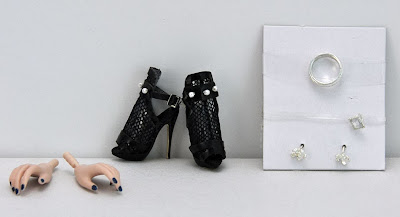 These shoes are amazing.  The stiletto heels are extreme.  There are little pearls on the tops of the shoes in front.  Midnight Star came with a square diamond ring, another set of hands (notice the blue manicure!), earrings, and a bracelet. 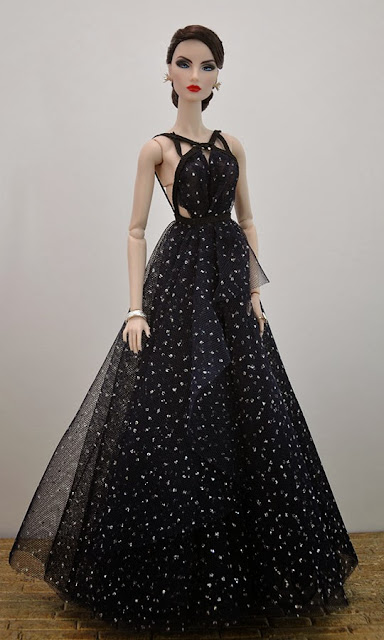 The dress is actual 1:6 scale replica of one of Jason's personal favorites of his designs.  How amazing is that! 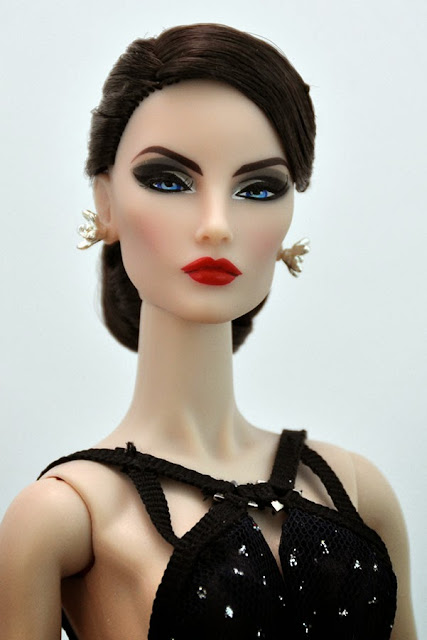 She is so beautiful.   Just exquisite.

Next up, was the centerpiece dolls from Monday's opening ceremonies.  When my friend texted me that both her number and my proxy's number was called, I couldn't believe my luck!  I squealed with delight.  Eugenia a personal favorite around her.  After Tonight Eugenia does not disappoint.

She came with an extra set of hands, earrings, bracelet, extremely high heels, and a little fascinator.

This dress is equally impressive out of box. 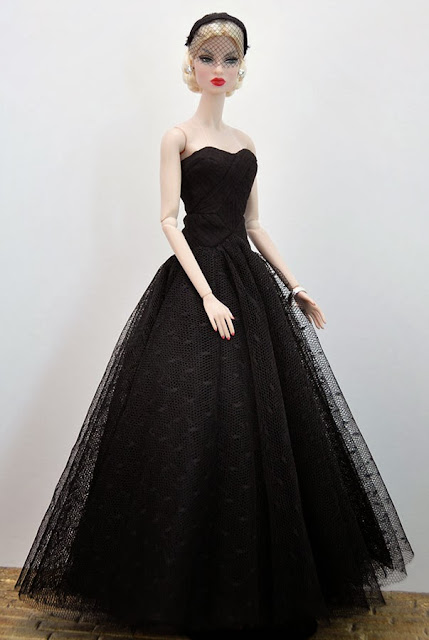 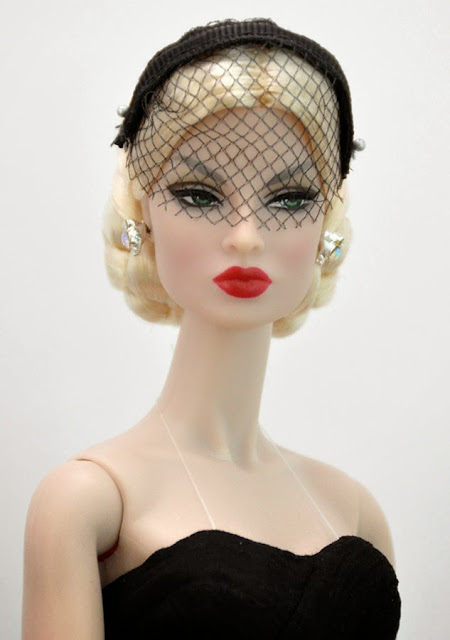 How could you pick one over the other?  I couldn't! 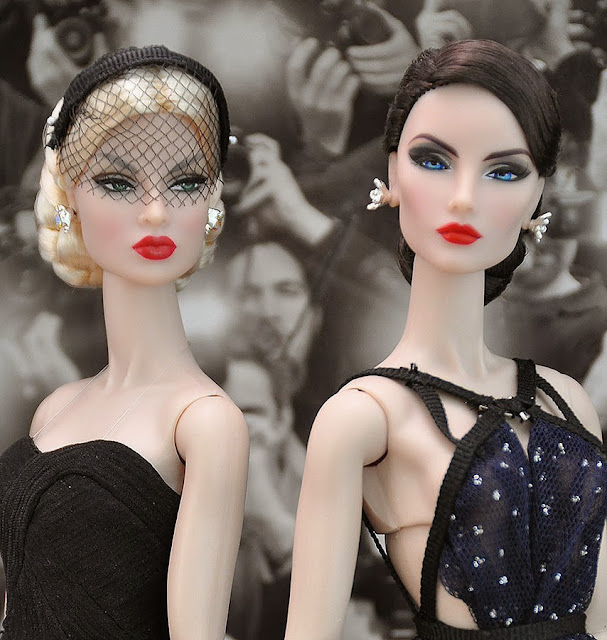 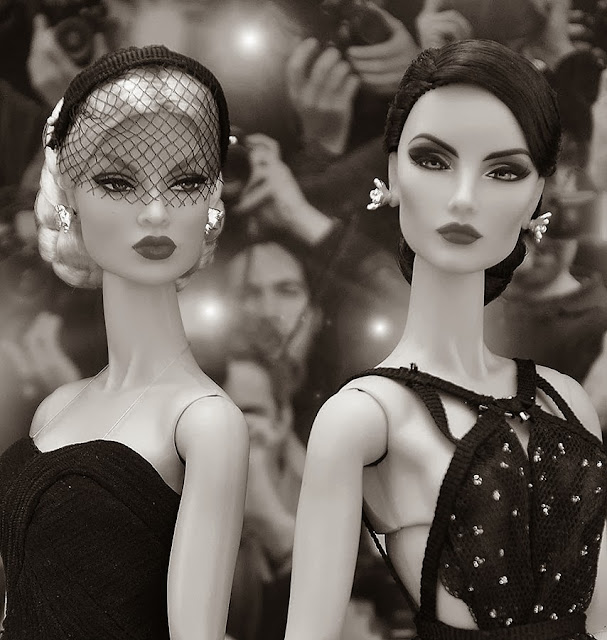 I have been waiting for this doll to be produced for years.

All collectors have a list of their “Grail Dolls”.  Those elusive dolls that are near impossible to purchase.  They rarely come available, and when they do, they are almost impossible to afford.  My number 1 grail doll would have to be Saks Fifth Avenue Agnes.

The last one that came available on E-bay sold for over $1600.  Saks was produced wearing an ensemble that looks to be almost an exact replica of Dressing the Part Agnes.  Since I already own Dressing the Part and know that the skirt stains the body,  I would be purchasing this doll for the head only.   I just can't justify spending that kind of money on a doll head.

When I saw October Issue Agnes, I immediately thought of Saks Fifth Avenue.  They may not be exactly alike, but I can live with the difference enough to be content.

Here is closeup in the box: 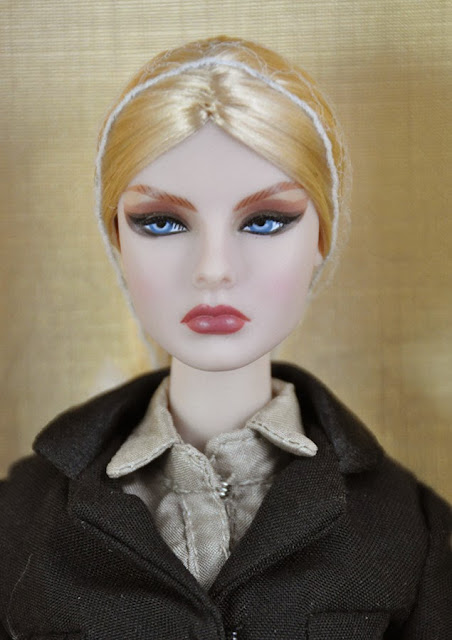 I really like the detail in the eyebrows.  The suit is very nicely designed and well-constructed.   Her accessories were nice (especially the shoes) though minimal.  I believe she needs a purse.

Although I had every intention of pulling ultimate sacrilege of rebodying this Agnes to a regular FR body so I could put her in the Dressing the Part outfit, I really like the way she looks in her stock. 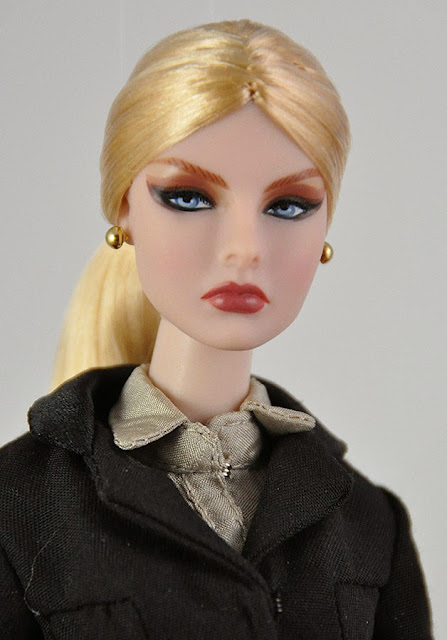 
I don't usually open my blog with a youtube video, but I believe this video is wonderfully delightful.   I love it when Ms. Azria corrects Robert Best and says, "Barbie would be a Herve Leger elite client."

This gift set shows a collaboration between true couture designers and Mattel.  We come to expect this from Integrity Toys, but it is surprising to find such attention to detail in 1:6 scale for Barbie.  Herve Leger is definitely not your daughter's or your mother's Barbie.  It is for the modern adult collector. 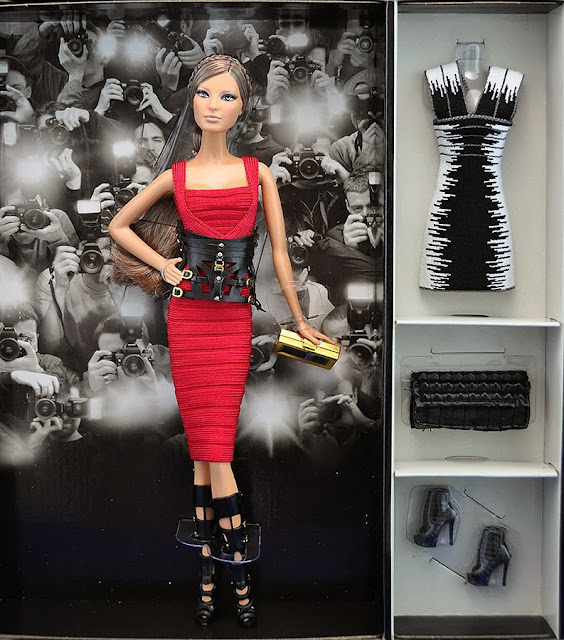 I loved this doll when the first European photos sneaked into the collecting community. It cannot be denied that this is an expensive Barbie.  Even with the fact that you get two ensembles, the price is steep.  However, Mattel had a 20% off sale recently with free shipping.  My Mother-in-law got me this one Christmas.  (Gotta love that kind of Mother-in-law!)

The red ribbon dress slips on over Barbie's hips (as does the bandage dress).  There are no snaps, loops, or velcro.  The black leather bustier zips up in the back with a working zipper.  The boots are plastic, but are have quite a bit of detail with gold embellishment where the buckles would be.  The little gold and black plastic purse actually opens.

Although this doll will appeal to the NRFB crowd, the doll looks great out of the box.  Her hair is very elaborate.  Her face up subtle and lovely. 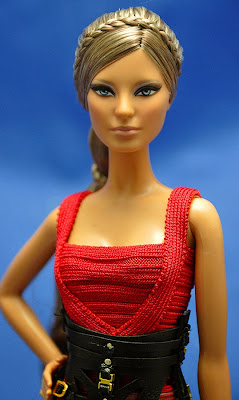 It was a pity there was no jewelry included in this gift set.  That is an unfortunate oversight for such a great doll.  I decided to pierce my doll's ears and give her some earrings.  What the heck?  Why not give her articulation while I'm at it?  Her skin tone matches the "caramel" skin tone produced by IT for Poppy and Dynamite Girls.  Throw in some nicer shoes and let's see what we get...

Now she can pose with the best of the dolls in my collection.  These dresses are showing up on Fashion Royalty and Nu Face dolls all over Flickr.  They are very versatile.  Here is Fame by Frame Imogen in the bandage dress. 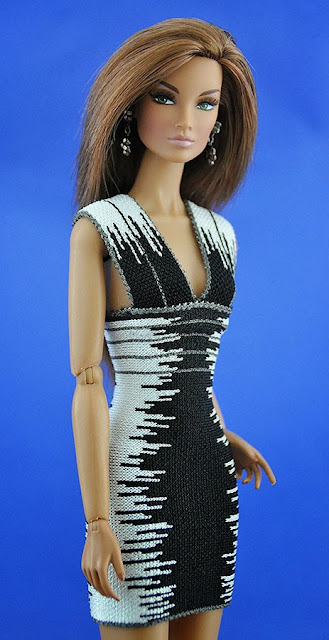 These are definitely dresses that belong in any doll's closet.   However, the doll cannot be easily dismissed.  With articulation she truly carries her own in my collection.  What a lovely surprise coming from Mattel. 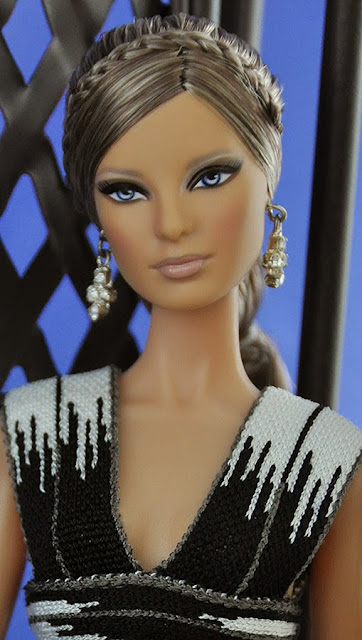