There's an old saying, "Close only counts in horseshoes."  I will elaborate for those of you reading this who are too young to know about this saying.  When you play horseshoes, you get points if the horseshoe is close to the stake.  In most games (as well as most aspects of life), you don't get points from just coming close.

I believe Integrity thinks it's playing horseshoes when it comes to producing dolls lately.   I'm just not sure about many of the decisions and the ball dropping along the way.   I still refuse to believe that collectors are happy about City Prowl Eugenia's unlined skirt.  I was excited about this ensemble because of the anticipated mix n match possibilities.  Since the FR2 bodies cannot wear any of the fitted/tailored clothing from the previous lines, I was hopeful for a quality black skirt.  It's useless to me in redress.

I'm not sure about the fabric choices being made for the Urban Safari line.  The leopard print fabric is just not to scale.   It's quite bulky and thick.  The pink/peach mermaid skirt on High Visibility Agnes isn't the exact shade as the mauve-like colors in the bustier and the shorter skirt.   It took me a while, but I finally found something a little closer.  Here is October Issue Agnes (a favorite from the 2013 Convention) wearing the MOTM Marissa bustier.  I think the color looks better.

A closeup, so you can see the color better. 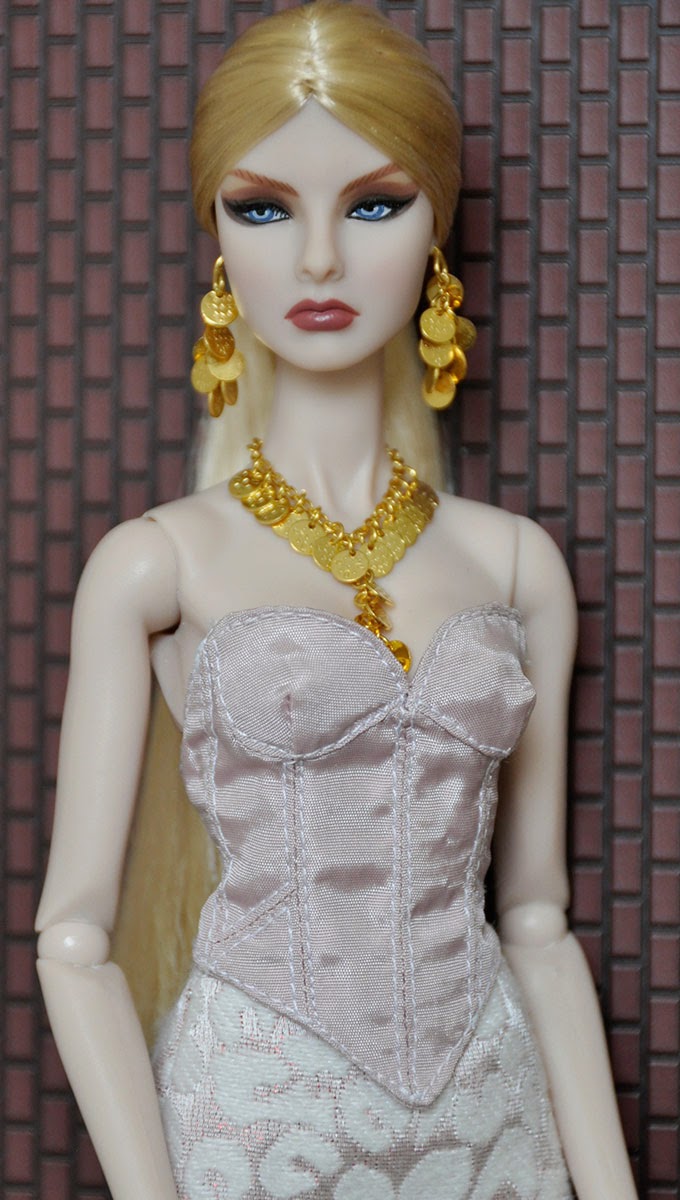 Last week, Faded Desert Kyori arrived.   Here is a photo of her in her box.

I very much like this ensemble and the attention to details.   However, the fabric choices are more weighted for winter wear and the design is definitely summer.   It's just off enough to aggravate this particular collector.

When I was photographing Faded Desert, I realized her eyelashes were all over the place.  I used my dental brush to fix them and wondered what caused the problem.  Then I discovered some sticky tape on the top of the box.

Apparently, in an effort to avoid further issues with mold, IT has brought back those pesky silica gel packets.  But not just any silica gel packets - oh, no, now we have the mack daddy of all silica gel packets.  Look at this thing!  No wonder it broke free of the double-sided sticky tape and bounced around inside the box messing up eyelashes.  I found mine in the bottom of the box behind the accessory area. 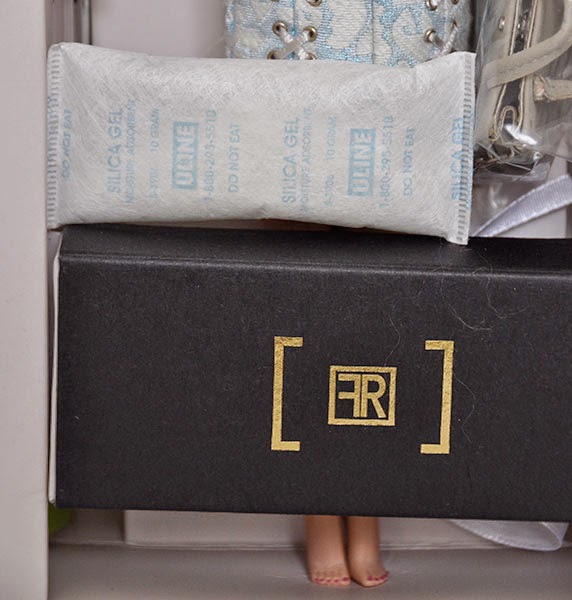 I hate these packets. They are the greatest danger to dolls' applied eyelashes.  And speaking of eyes.  Here is a closeup of Faded Desert.   So close … but yet so far. 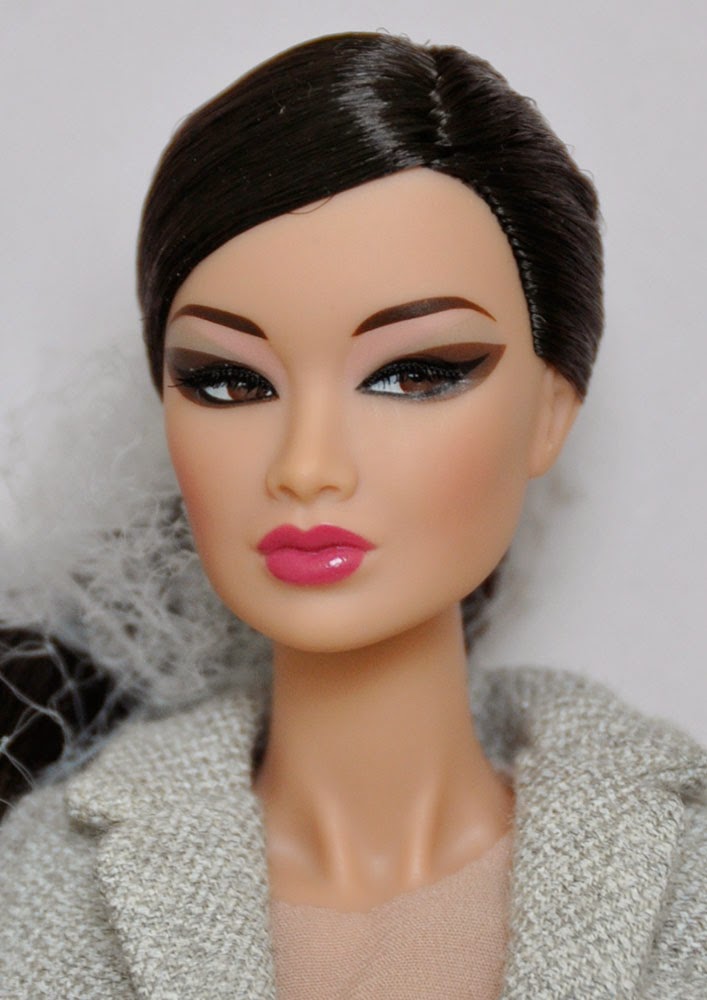 A friend of mine explained that during production, IT appears to be using a gloss sealer over the eyes instead of a matte one.  This gloss sealer makes the eyes shiny when you try to photograph the dolls.   It also delays drying of the glue on the eyelashes, allowing the eyelashes to move around a little, either slipping into the eye area, above the line, or even coming loose at the ends.  This makes a lot of sense.  This gloss sealer can also run into the shadow areas.

Here is a Photoshop enhancement showing the difference of a very minor adjustment - in horseshoes, we would call this a "ringer" (a perfect shot).   I may have to send her off to an artist to get this result.  She is a lovely doll and I hate spending an extra $30 to fix something that should've been corrected during production. 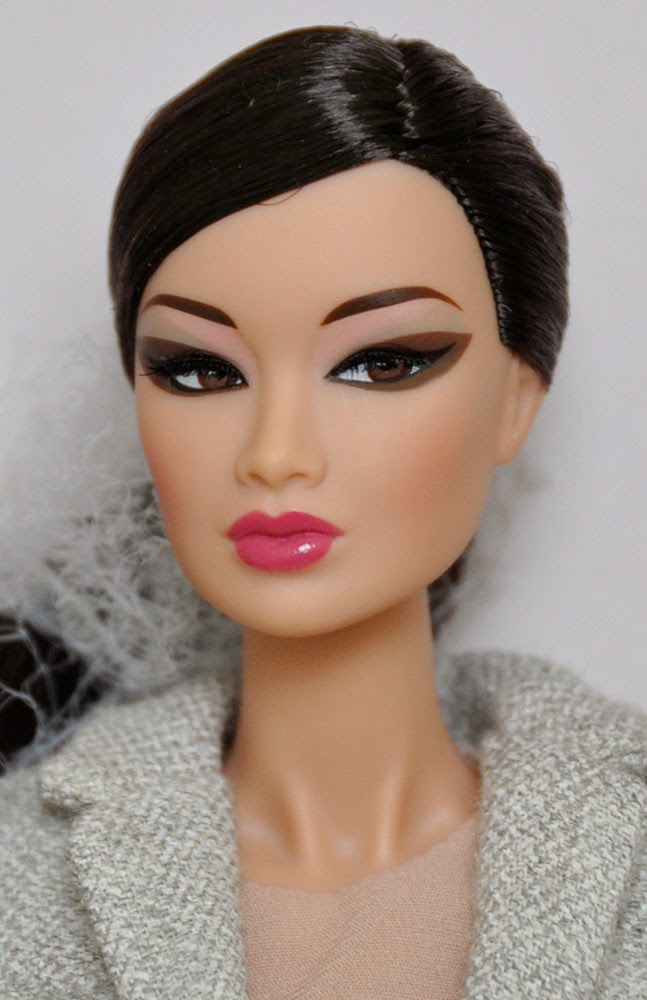