First, I really want to apologize if my reviews come across negative sometimes.   I do not mean to hurt anyone's feelings - these are just my personal opinions.  I realize that collectors are very serious about their dolls.  I try to be honest in hopes of helping readers make educated decisions about money they spend in such an unhealthy economy.  I know I've made many purchase mistakes over the past several years.

My most recent mistake was "And Another Thing Kyori".  When she was unveiled, I had no interest in this doll whatsoever.  It may have simply been a "knee jerk" reaction to one of my favorite doll molds getting a make-over.  I just refused to pre-order this doll.

... Then I saw her at the convention ... I knew this doll had to come live with me.  I put my name on "wait lists" ... I sold several more dolls from my collection to afford her ... I made trade offers ... I think I was in full-throtle-panic-mode.   She was finally acquired from a dealer at a smaller markup than the going secondary market price.

Even though the dealer had taken a photo of the actual doll I was getting, I held my breath when opening the box for fear of the dreaded "wonky eye".  Not this girl.  Her screening is one of the most perfect I have received this year.  Deep sigh of relief.

Integrity Toys has been very generous with their "mini" giftsets this year.  It's going to be quite difficult to make a 2012 "Top Ten" list.   There are still three dolls on pre-order that haven't even arrived yet and it is December 1.

"And Another Thing Kyori" comes wearing a very modern interpretation of evening wear.

She also has a beautiful set of lacy, black lingerie.

Her hair is so thick and lush!

When she was initially released, I thought the skirt was too much like a Barbie Models on Location skirt.  The jacket reminded me of Dressmaker Details Busines Basics.  But this business suit is much better constructed and lovely.  However, my only complaint with this giftset is that the skirt is a little too long.  I will probably shorten mine.

But the jacket is wonderful and the collar is detachable.

This giftset rivals Optic Verve Agnes and is reminiscent of the Atelier collections like A Brighter Side, Poesie Sans Coleur, etc.  If "And Another Thing" follows suit, then it will be very difficult to acquire in the very near future.  If you like it, you better get one now.  We all know the secondary market on the other gift sets!

While I was photographing this girl, I kept thinking to myself - "This doll reminds me of a celebrity ... who is it?"   When I realized who I was thinking of, I burst out laughing.  I don't think RuPaul is the only drag queen to be immortalized in plastic.  I believe we now have a version of Jujubee ... (I found this photo in google.) 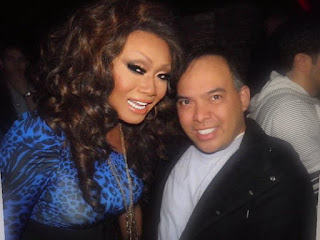 STATUS UPDATE:  I contacted Integrity Toys Patient Care on October 21 with a claim for my convention High Profile Eugenia whose hairline and eye had problems.  I sent a photo and an electronic copy of my receipt from purchasing her at the convention.  It is 40 days with no response.  I am going to report the status of my claim in each blog.