I hope all of my readers and followers have a safe holiday.  I hope you find time for happiness with loved ones and family.

I decided to focus on a favorite doll and enjoy my evening instead of dwelling on the fact that I was unlucky in the recent ITBE lottery and came up empty-handed.  I have many beautiful dolls to enjoy here and am more than blessed to own them.

Happy 4th of July!  There is always fireworks when Natalia Fatale is around! 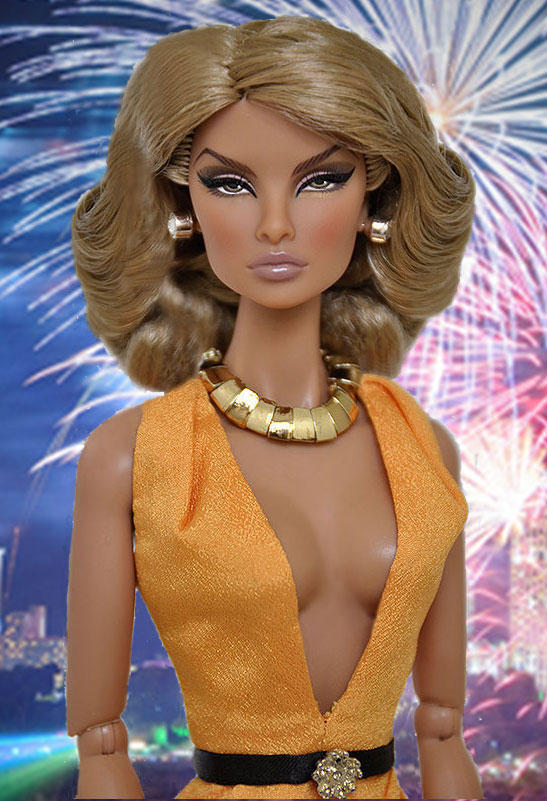 I STILL Do NOT Collect Poppy Parker

I Do NOT Collect Poppy Parker

Seven dolls from that entry have been sold to other collectors who DO collect Poppy Parker.  Unfortunately in 2013, Integrity Toys released a line that I truly loved called "At The 1965 International Fair".   Each doll represented a different country.  The club doll that year was a tour guide.  What an adorable group of dolls who found their way to my home.  How did that happen?

In 2014, I held tight to my resolve and did not purchase anything from the "spy" theme.  Personally, I don't like the spy theme and have never enjoyed James Bond or any other spy movie.  It's just not my thing.   Then IT shook things up with some 1970's inspired dolls at the Gloss Convention.  I instantly fell in love with Wild Thing Poppy Parker. 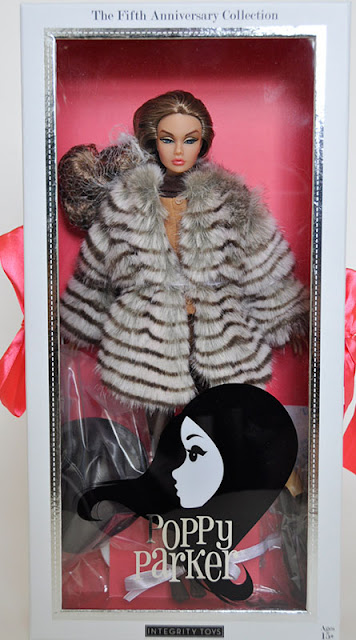 I really appreciate "The Fifth Anniversary Collection" packaging.   I tried to talk myself out of buying this doll several times.  Then a seller recently listed this one on e-bay with such perfect eyes.  I could no longer resist! 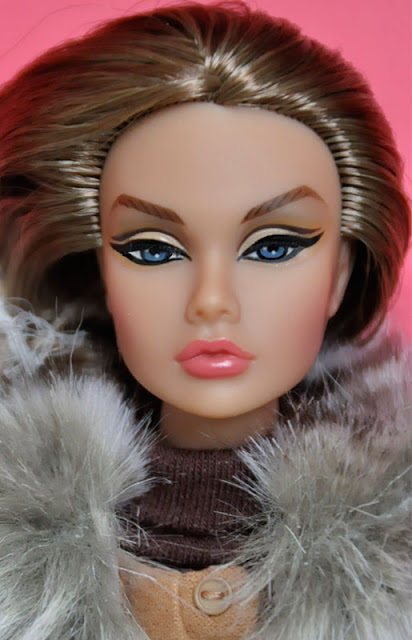 Wild Thing comes with some extraordinary accessories.  In addition to that super cool striped fur coat, tights, knit turtleneck blouse, belt and "suede" vest and shorts, you get a leather cowboy inspired hat, earrings, sunglasses, and some incredible boots.  (Although the photo makes the hat look black, it is actually very chocolate brown.) 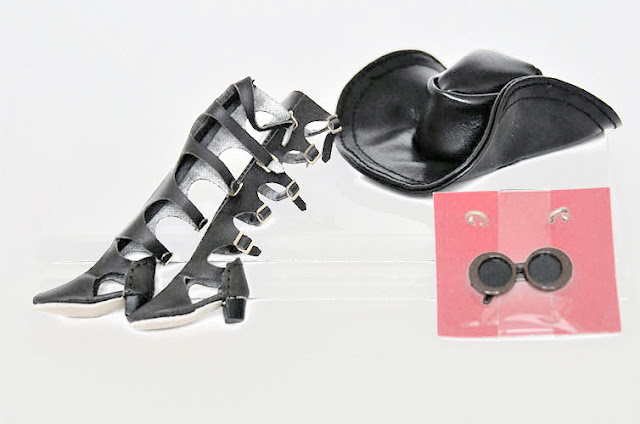 Those boots wore me out trying to get all those little buckles to close!  I've met David Buttry and I know he doesn't have tiny hands, so he must have some sadistic tendencies.  I thought I would start cussin' before I was halfway finished. 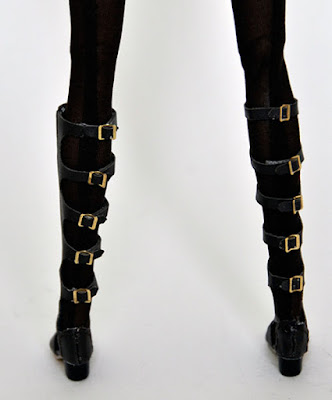 When those come off, they aren't going back on any time soon!   I really do appreciate this outlandish outfit! 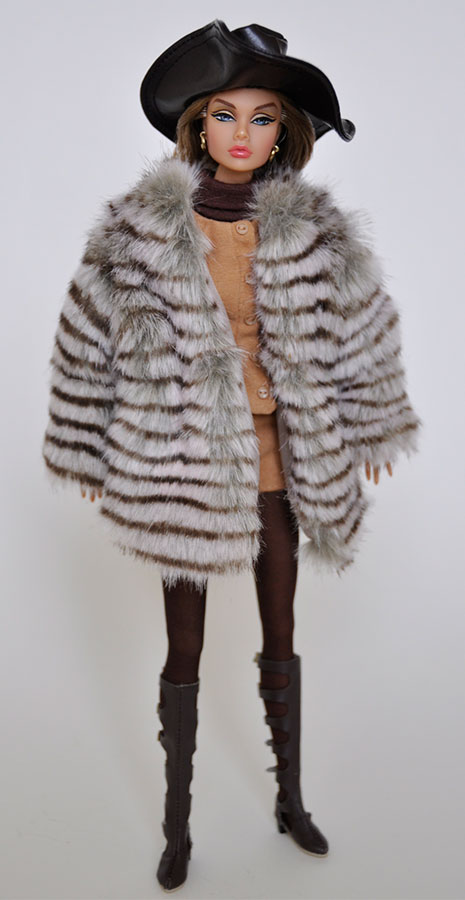 There is a flickr poster who uses the name "Nata-leto" who posted a comparison photo to a 1971 Gucci advertisement for this ensemble.  The boots are Valentino.  (Maybe it's Valentino who has the sadistic tendencies!) 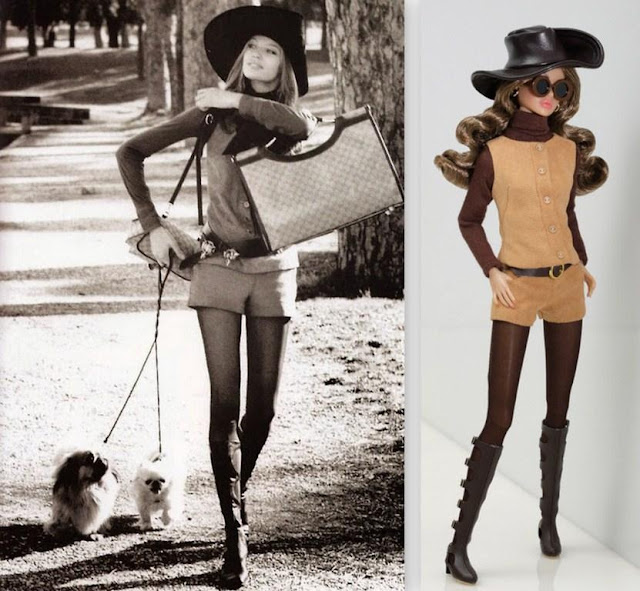 Wild Thing Poppy looks so cute in her little ensemble without the coat and hat!  I may not collect Poppy Parker, but I guess I can still appreciate a remarkable doll when she comes along!  When I make up my mind to remove those boots, we'll see how she looks redressed! 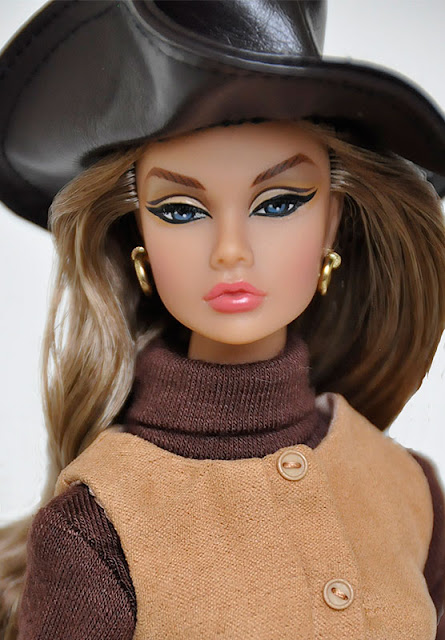