All photos are the property of Integrity Toys.

Integrity Toys finally released a group of mainline dolls for 2015.  Unfortunately, these ITBE (Integrity Toys Basic Edition) girls were only available to W Club members through a lottery.   Many boards have already shared the original IT notice, so this is old news for many of you.

IT has a long history with their ITBE line.  Originally, these were less expensive dolls with unique molds on non-articulated bodies similar to the Mattel model muse body.   Their clothing was simple and they wore plastic shoes and jewelry.  They were quite affordable and some of the dolls were lovely.   Although they could wear many of the clothes available through other lines, the lack of articulation was a deal breaker.   Additionally, the heads didn't switch well to the upgraded bodies (the size was off), so many collectors failed to get on board.  The ITBE line was discontinued.  You can't even find a reference source for these dolls anymore.  Below is a photo of Romantic and Desirable to provide an example of this line. 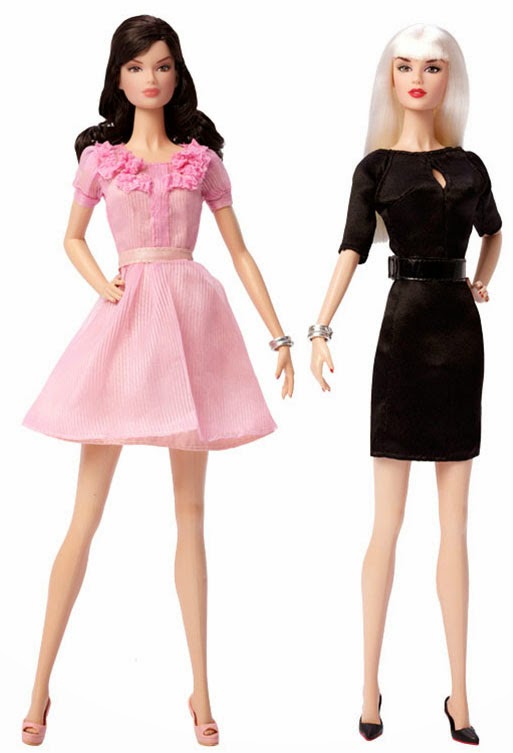 At the 2013 convention, IT tried something new and offered a revised ITBE line.  Instead of using the old molds and non articulated bodies, they used current molds on popular bodies.  Hard Metal Lilith (left) was an instant sensation compared to Sequins Anja (right).  They both retailed for $65.  (I had to purchase Lilith on the secondary market - ouch!) 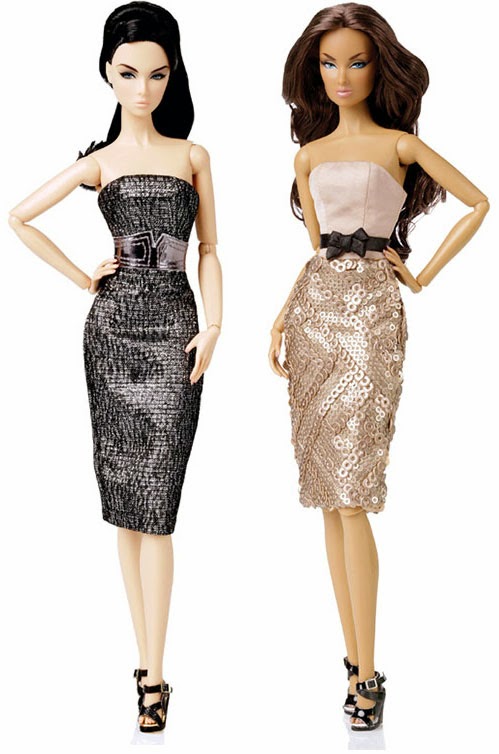 Following the convention, W Club members got the chance for three additional dolls through a lottery.  Each doll cost $75 and was released in an edition size of 300.  Although my personal favorite was Gold  Glam Adele (left), collectors' preferred Shimmering Copper Isha (middle).  Light Strike Natalia (right) never became as popular as the other two.  There was all sorts of drama following the lottery. Collectors were trying to swap dolls, trade winning tickets, immediately sell the dolls on secondary market for ridiculous markups.   W Club members who missed a doll got angry.  Feelings got hurt.  It was a mess!  (I entered for Adele and Isha, winning the chance to purchase Adele.  I was patient and waited long enough to find Isha on secondary market at a decent price.) 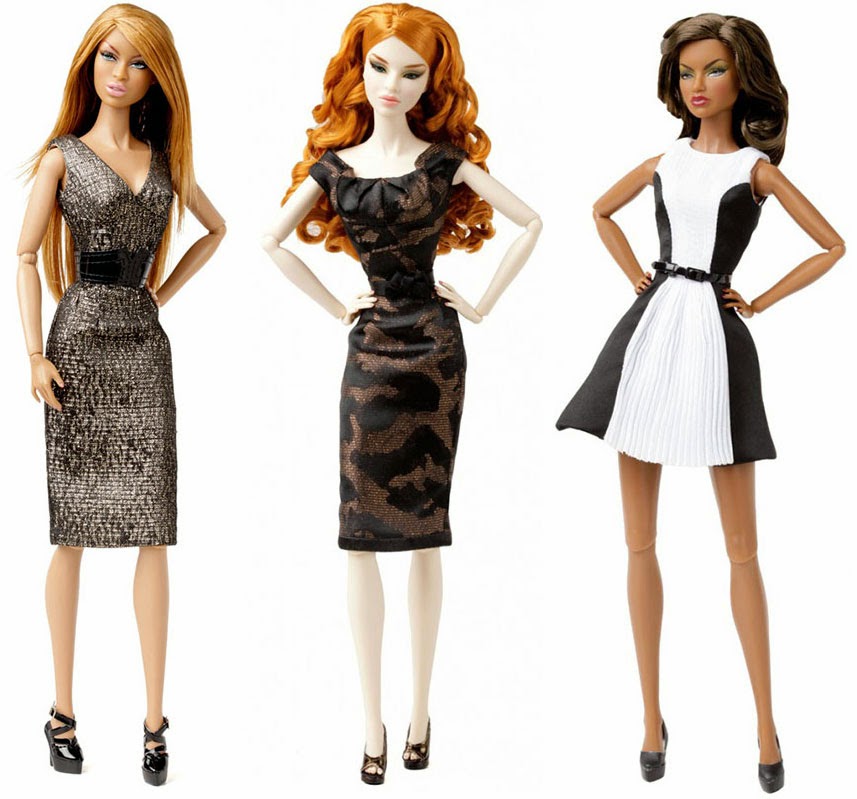 IT recognizes a good thing when they see it.  So in the spring of 2014, we got another round of ITBE.  Again, the price point was $75 and the edition sizes were 300.  Again, there was a W Club lottery.  Maybe some of the hurt feelings could be heeled by another chance and a different desirable doll.  This time there were four dolls.

I entered for only one, Second Skin Vanessa (left), and won!  She is the only Black Vanessa released to date.  She is very rare to find and is highly desirable among collectors.  I purchased the Night Strike Monogram (#2) on secondary market at a good price.   Morning Dove Kyori (#3) was the least favorite of this group and can still be picked up reasonably priced.  Although I don't own Red Strike Janay (right) I've considered purchasing her.   This is the first time she has been offered through the regular FR line. 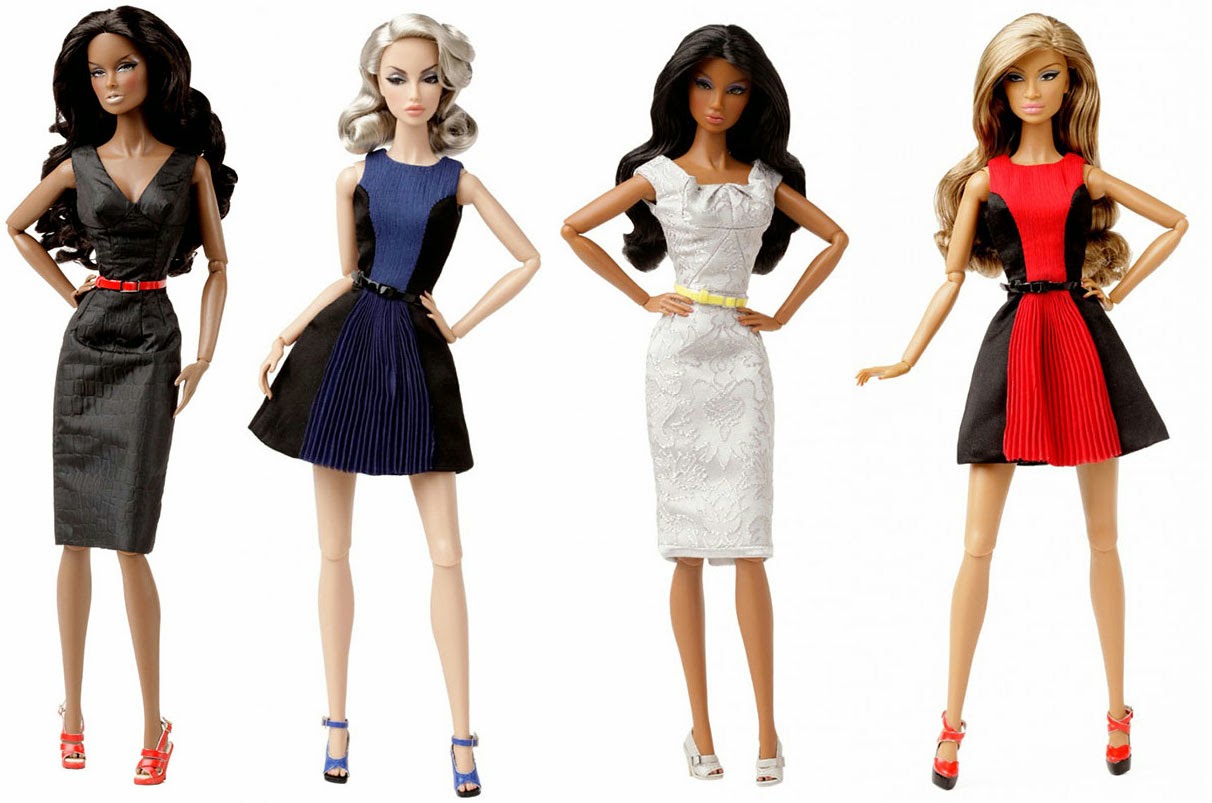 Surely there were enough dolls to go around!  You'd think so, right?  But IT underestimates the greed and opportunistic nature of some doll collectors.  Several W Club members entered multiple times (for each additional membership) and for all dolls.  It was like trying to shoot the side of a barn with a shotgun - you're bound to hit something!  When the results came in, again some collectors got nothing and some got multiples of the same doll.   Some collectors got a doll they didn't want but had entered for hoping to make a good trade, so trading started at a frantic pace.  (A few collectors took advantage of the multiple wins by selling dolls at ridiculous prices.)  There were a lot of hurt feelings and upset collectors all over again.

Now, it's one year later, and here we go again.  This time the price point was increased to $99 - that's a 33% markup; however the lingerie is extremely nice.  This time there are six dolls, all using the older FR body.  All were advertised as having edition sizes "less than 500".   The W Club was in a frenzy. 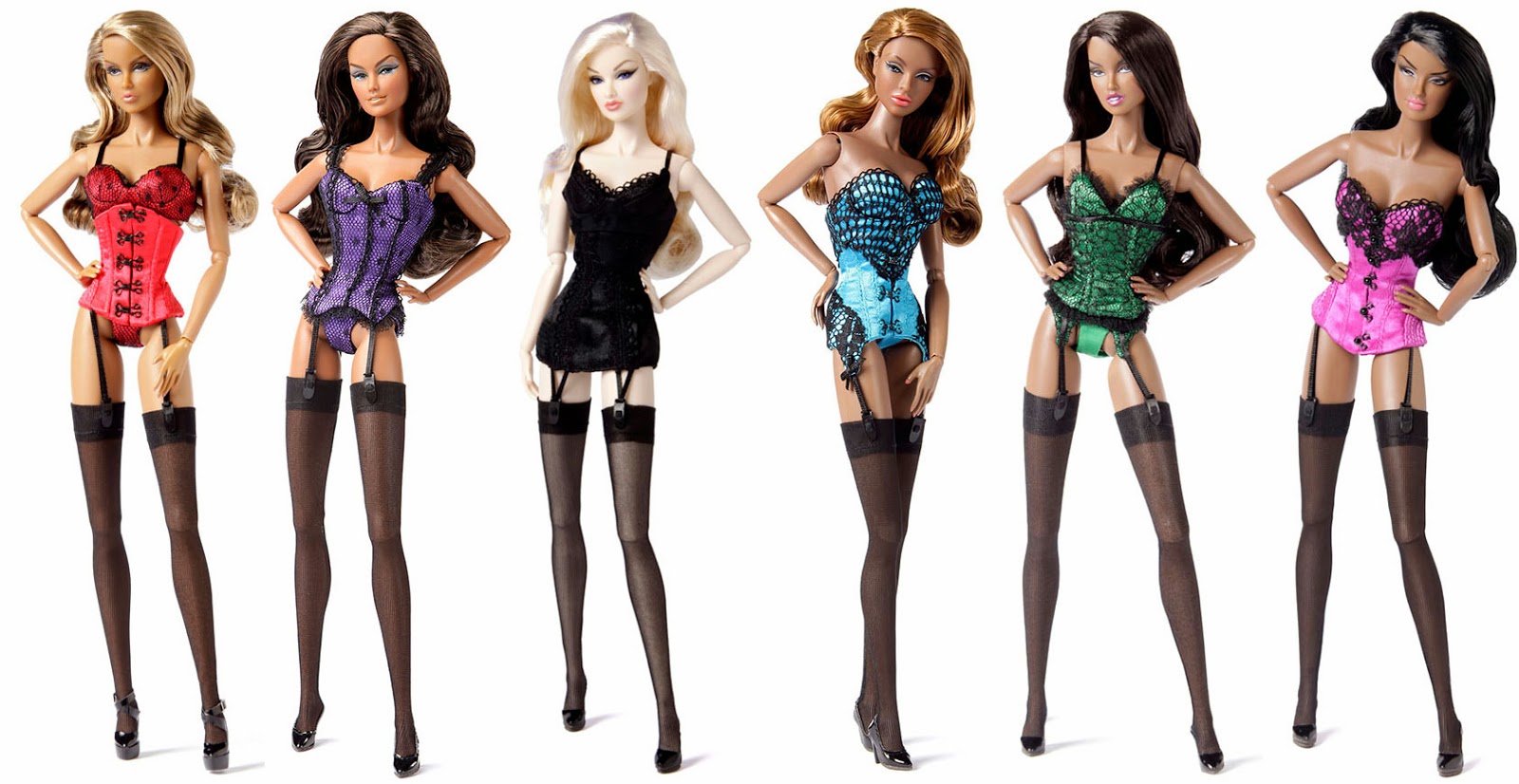 Love Roulette Vanessa uses the 2.0 mold.  It's the same mold used for 2011's Monaco Royale, Dress Code, and Current Pursuits.  I believe this is an excellent mold and am excited to see it return.   I entered this lottery but didn't get picked.   Love Roulette Vanessa uses the Light Honey body tone which was introduced with last year's Vivid Encounter Adele (who will probably be a popular body donor!).   Concern has been expressed that her head color may not match the body because this was a problem with Adele.  It has also been suggested she has the same facial screening as Monaco Royale.   I am eager to see her post production photos.  According to someone who counted the winning numbers there were 350 in her edition size. 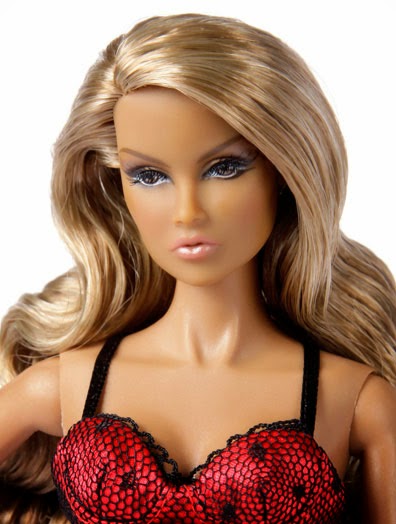 Next up is a new mold.  She is called Audacious Finley Prince.  Her skin tone is the regular FR Black.  Edition size was 300.  I am not a fan of this doll's screening but realize I may be surprised by the final result.    She has been comically referred to as "The Joker" due to her smile. 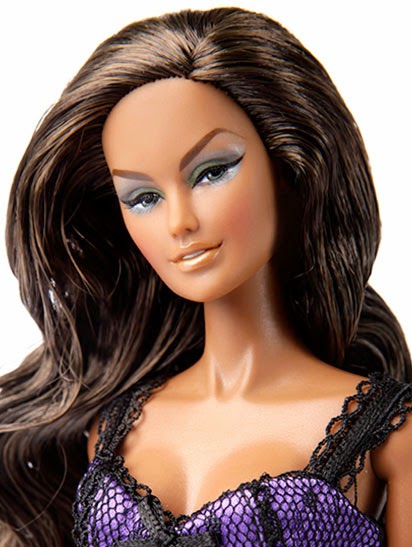 The third doll is the only obviously caucasian doll in this group.   She is Dark Side Anja.  She has the rarer porcelain skin tone.  The earlier Brides of Dracula and Tatyana used this skin tone.  A couple of my favorite dolls, Follow the Line Kesenia and Shake It Up Korinne, use this skin tone also.  The edition size was 300.  She was the other doll I entered for, hoping to win.  I was lucky and have already paid for her.  It has been suggested that she uses the same screening as Regal Solstice which I no longer own.  It has also been suggested that Purity Dasha would prove a good body donor for her. 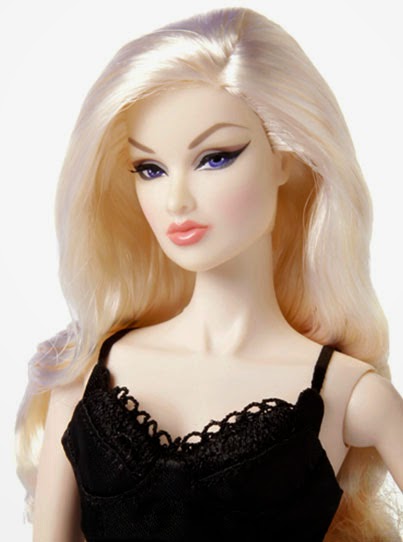 The next three dolls were also released in edition sizes of 300.  They use the A-Tone skin tone.  That is the same skin tone as The Muse Adele, Second Skin Vanessa (see above), most Jordan dolls, and the Gloss Convention Le Smoking Adele.  The first is My Desire Isha.  It has been commented that she reminds collectors of Bodacious Adele.  As I already own Bodacious (she's a personal favorite), I chose  to not enter for this doll.  Even though there has been some concern expressed about the head color does not match the body on this promo photo, she was one of the most popular from this group.  Collectors have really been scrambling to get her! 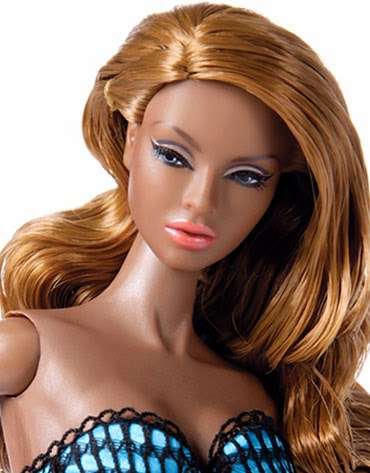 The second A-Tone doll was Entice Kesenia.  I think those who missed out on Second Skin Vanessa last year will be pleasantly surprised by this doll.  Personally, I believe she is going to be very similar and will be the dark horse of the collection.  I think she will probably be in great demand when collectors start receiving her.  She would've been my third pick. 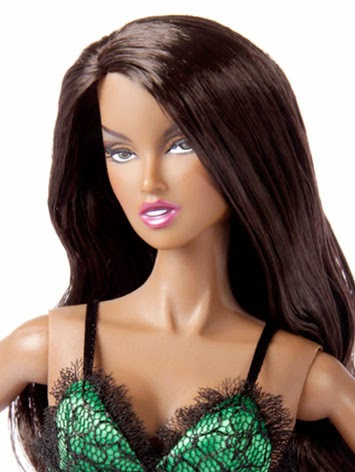 The final doll in the collection is Buxom Veronique.  She uses the 1.0 mold.  Personally, something still feels off about the shape of this doll's head.  After the lottery results were announced, there seemed to be more interest in this doll than during the period of time when members were entering the lottery.  Several collectors who missed out on her were making all kinds of offers to add her to their collections. 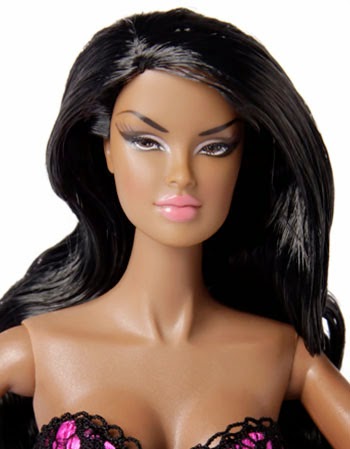 Now that the results have been announced, the drama has again started.  Dolls are already showing up on e-bay at escalated prices of over 150% markup.  (Shameless!)    Collectors that missed a doll they really wanted are begging and pleading to take over payments or make trades.  Some collectors won nothing, while others won multiples.  Tension is high and emotions are raw.   Is this really how you are supposed to feel about your hobby?

I only entered for the dolls I knew I would truly enjoy.  Having won one lottery, I am very happy for that fortunate opportunity.   I refuse to take on the anxiety of trade jockeying or trying to sell dolls I didn't want in the first place.  I feel better about myself as a collector knowing I let those dolls go to individuals who actually wanted them.

I hope each of my readers is as blessed as I feel that I am.  I hope you were fortunate and are excited about your collections.