2016 is turning out to be a year of coincidences.  Last week was Jordan week on Flickr and it coincided with my mother's birthday.  This week is Nadja week, and I just received Polarity.

Nadja Rhymes was introduced in 2006 with Erin Salston when Integrity Toys (IT) first introduced their NuFace line.  These dolls were supposed to represent the young "up and comers"; the models of the fashion houses.  Hard Act To Follow (production edition of 1200) was trendy and exciting.  Although I kept the ensemble, I wound up selling this doll because I could never grow to love her hair color.  (Photo property of Integrity Toys). 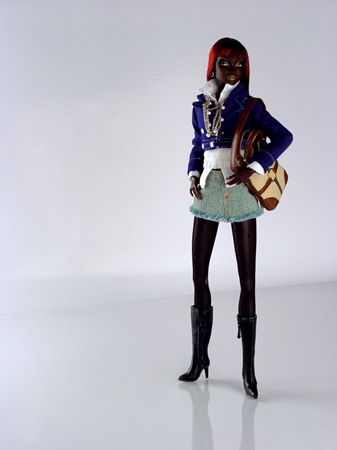 2007 was the year IT started playing around with character molds.  SE Asian Isha became Caucasian Luchia and we got  a multi-racial Nadja with Colette Duranger (one of my favorite characters).  That year collectors also received the next release of Nadja, Urban Outfitting (edition of 1000).  I LOVE this doll and her original ensemble.  She is shown below wearing the Elements of Surprise Dress. 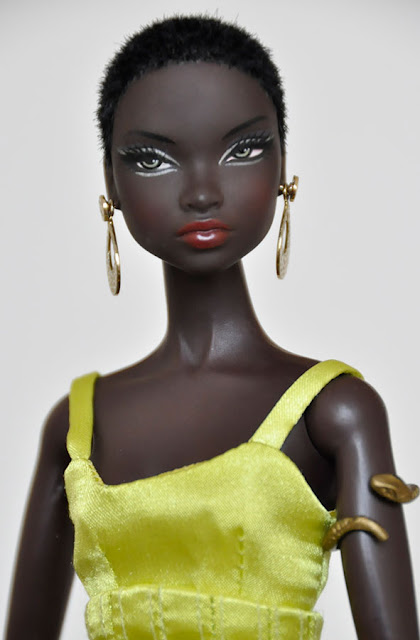 The only other Nadja to ever be released with the original head mold was The Illusionist in 2008 (production of 500).  For some reason, Nadja never found the love of the collecting community she deserved until she stopped being produced!   (Another photo property of Integrity Toys.) 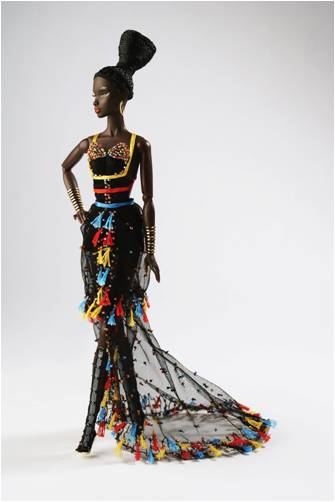 In 2015, Nadja Rhymes received a makeover.  The new mold was introduced in the regular Integrity Toys lineup, but the first received by collectors was a 2015 Cinematic Convention gift doll, Out of Sight.  This doll is extremely popular.  Although I think she is more realistic, I still love the stylized look of the original.  I was able to purchase Out of Sight from an attendee's guest at a very reasonable price while the convention was taking place.  She usually demands >$200 on secondary market today.

I have not made up my mind about keeping this doll.  She is amazing, but I don't want her to diminish my love of Urban Outfitting.  Crazy, huh?  However, it cannot be denied that Out of Sight is one  gorgeous doll! 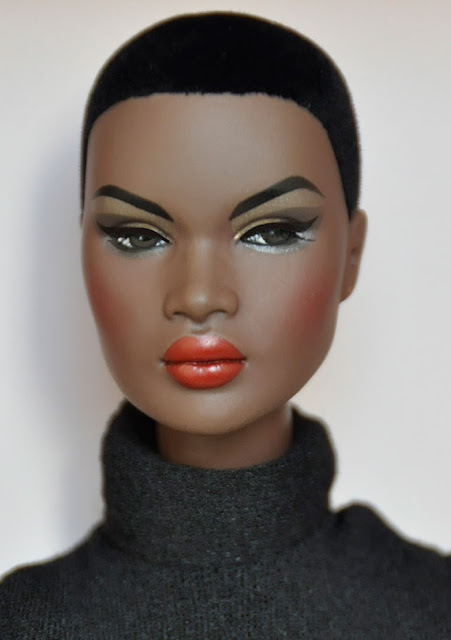 One of the reasons I haven't deboxed Out of Sight is that I had pre-ordered Polarity from the mainline.   I wanted to wait and see if I preferred one to the other or would keep both.  Yesterday, Polarity arrived at my home.  Unfortunately, I do believe the face ups are quite similar. 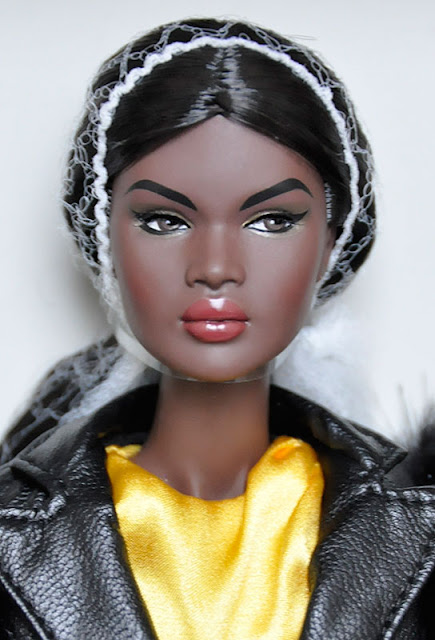 This is the picture of her NRFB.  I absolutely love this ensemble.  The coat is amazing! I didn't realize from the promo photos that she was wearing tights!  Yeah!  Even if I decide to sell this doll, I will be keeping the clothing!

These are the accessories.  The choice of orange is a little odd, but it does represent a color that is lacking in my collection.  I love the clunky earrings!  The boots are wonderful even though they don't allow her to easily stand on her own. 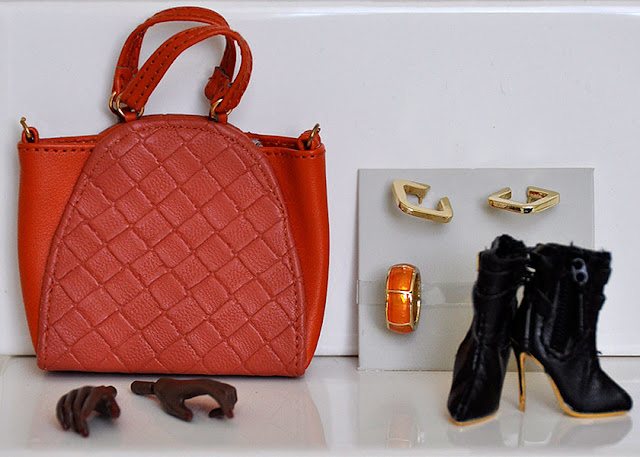 To support my collecting "guidelines", I have added her to my list of dolls received in 2016, I have deboxed her within two weeks, I purchased her at original price from my dealer based on a photo by Integrity Toys, and I have already sold more dolls this year than I have purchased. 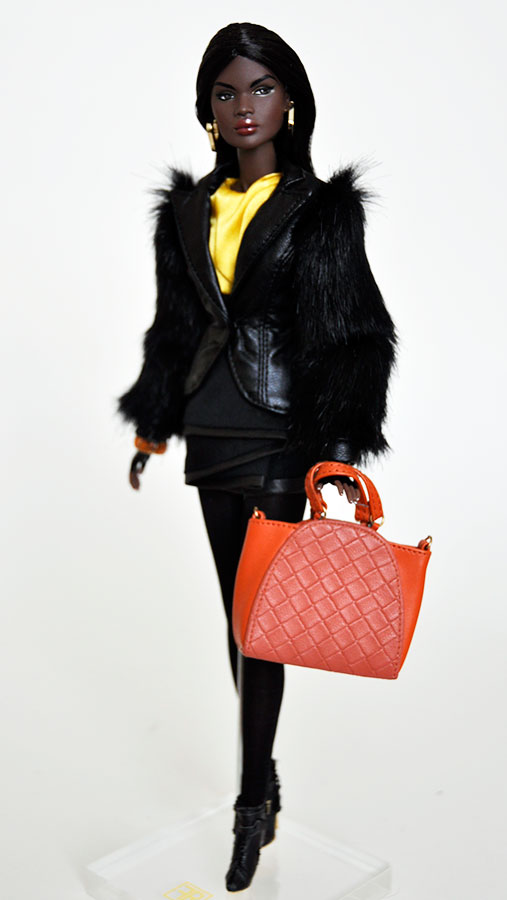 I really do like this doll quite a bit!  I added the gloved hands from Bionica Jordan. 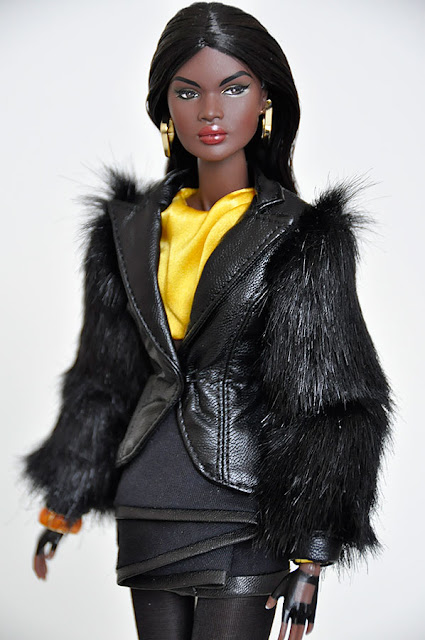 I'm not a fan of parted, straight hair, so I pulled it back.  (I think her hairline is a little too low on her forehead anyway.)   Much better, don't you agree? 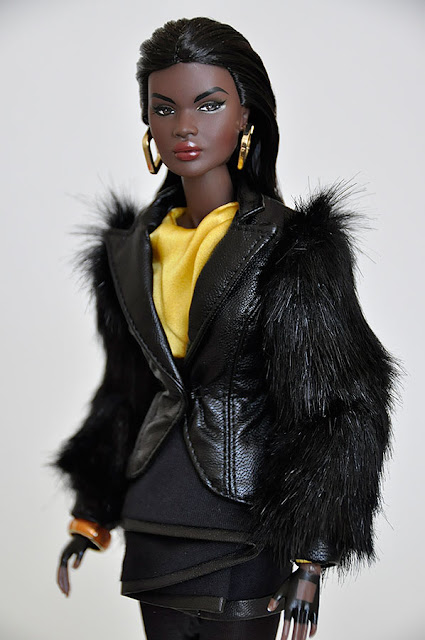 Side Bar:  Since I was too chicken to take the coat off (the blouse is long sleeved), I am including a photo from Integrity Toys of the ensemble without it.  I think the crop top is just wrong with tights and a fur/leather coat. 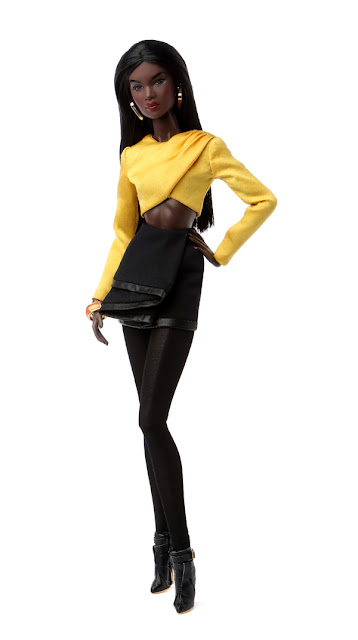 With her hair pulled back, she's definitely a keeper!  So, Number 2 of 2016 is Polarity Nadja Rhymes. 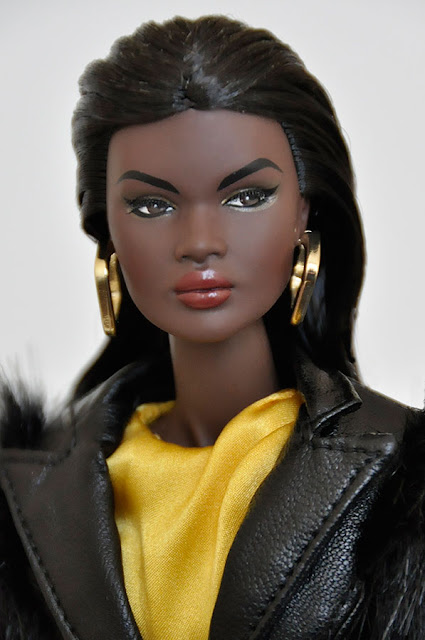 EDIT:  I went one step further and tied her hair back into a low ponytail.  I took an older bracelet and put it on as a metal hair holder.  Now, she looks like a model to me. 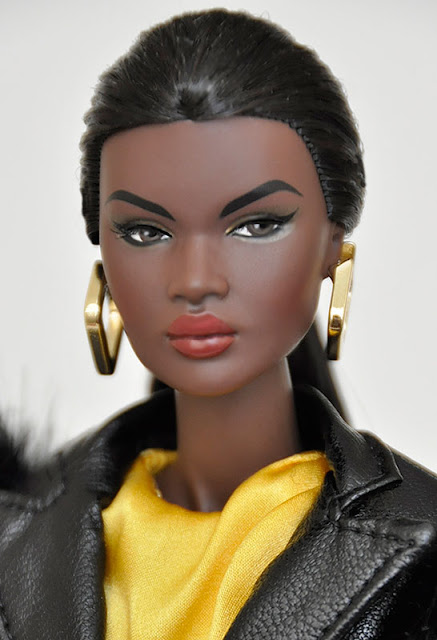 I was single when the next doll was released through a "right to purchase" opportunity in a W Club lottery.  I was just getting over a very bad divorce  and had purchased my first home by myself, so I was quite short on cash.  I remember telling Mama about the doll and saying how I hated missing the opportunity to enter the lottery; she told me to enter and she would pay for the doll as my house warming gift.

Mama was the most selfless person I've ever known.  Being the mother of four children ages newborn to 6 years old was hard enough, but when we started school she began babysitting three children from our neighborhood to help pay for our school clothes, supplies, etc.

I remember when my father had an affair and Mama went to work in a factory so she could be more independent and take care of those four little children.  She worked in that factory until all her children and grand children were grown.  I don't remember ever wanting for a thing.  She would work 2nd shift, get home at 11:30, check everyone's homework, and be up at 6:00 the next morning to get us all ready for school.  I don't recall ever hearing her complain one time.

As an adult, I would fuss at my Mama because she would take her dinner money and donate it any time a hat was passed around for someone in need.   She said the money was put to better use; she could grab a sandwich when she got home.

When I was in college, my best friend was gay.  He was like a brother to me.  He contracted AIDS as an adult and lived a few brief years before succumbing to the disease.  When my mother passed, we were going through old bank receipts and I found where she had sent him a check every month until we lost him.  I found notes from him to my mother, telling her how much she meant to him.  No one in the family knew any of this was going on.  She never told us.  ("Doing something good for someone is reward enough!")

Today would have been my mother's 74th birthday.   "Happy Birthday, Mama!"   She died of cancer in 2010.  I miss her every single day of my life.  My mother believed she came into this world with nothing and planned to leave it the same way.  What she did leave was a role model that I've aspired to but failed miserably at many times.

By coincidence, this week's Flickr theme doll is Jordan.  I won the opportunity to purchase her, and Mama gave her to me for a housewarming present.  She is one of the most important dolls in my collection. 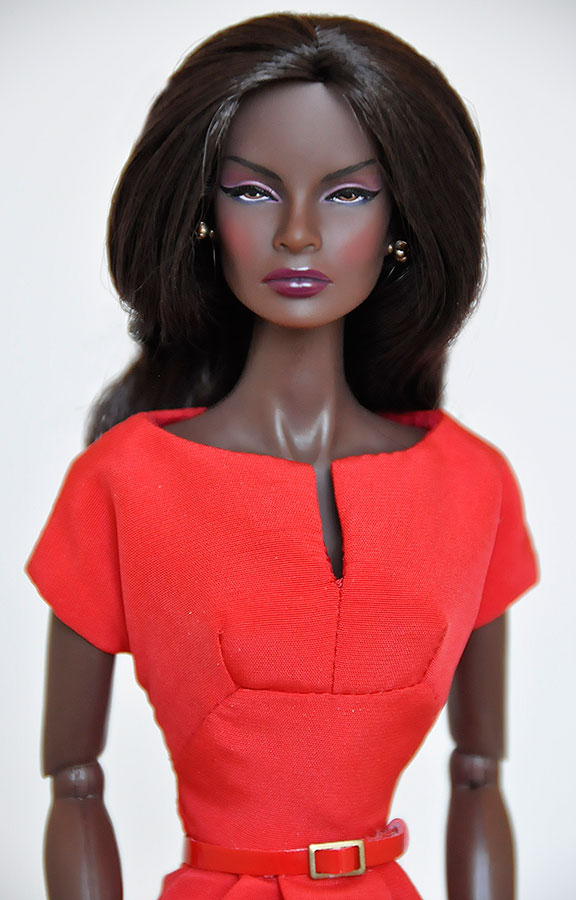 Posted by Desperately Seeking Dolls at 10:52 AM 12 comments: