While looking through my "Best of" lists over the past six years, one thing became immediately apparent - if you collect Fashion Royalty dolls, you need to be a member of the W Club AND you need to attend the Integrity convention.   It seems that the majority of my "Best of" dolls are acquired from these two sources.  If you cannot attend the Integrity convention, you need to be prepared to spend some money on the secondary market.

2015 was definitely the year of the NuFace collection as it returned with a vengeance; four of the dolls on my "Best of" list were NuFace dolls.  My favorite NuFace from last year came from the convention- Evening Blossom Dominique Makeda. 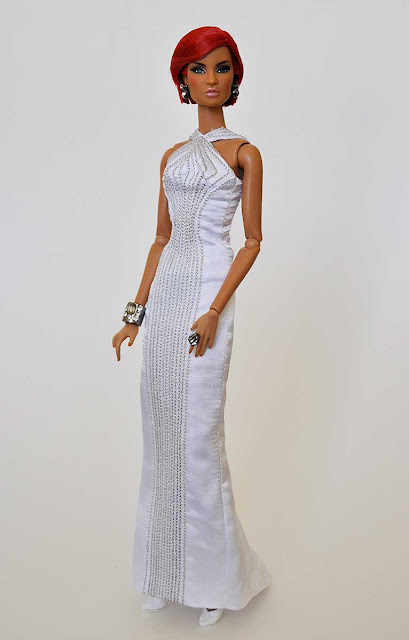 I have enjoyed redressing this doll so much!   She was a very close second on my countdown and is worth another look. 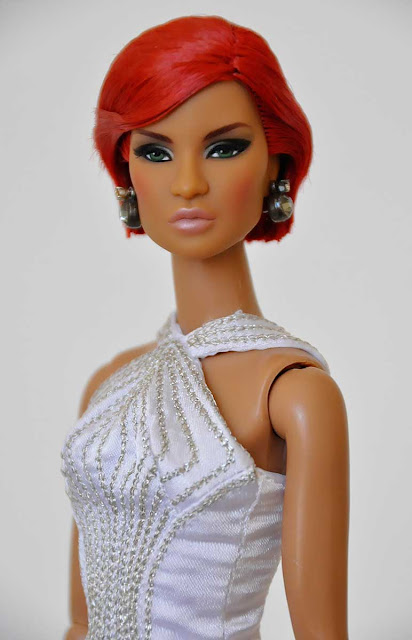 My #1 doll on the 2015 countdown continues to be one of my very favorite dolls ever produced.  She was a W Club Exclusive.  She is Rare Appearance Dania Zarr. 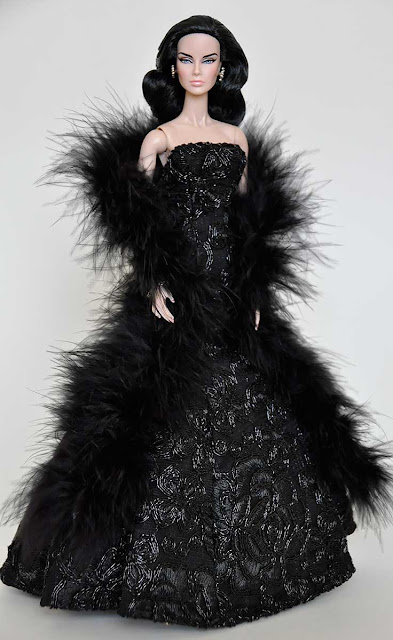 There is a classic beauty to this doll that makes her timeless.  She is wearing Natalia's Inner Spark gown with a black feather boa.  She has always reminded me of Elizabeth Taylor. 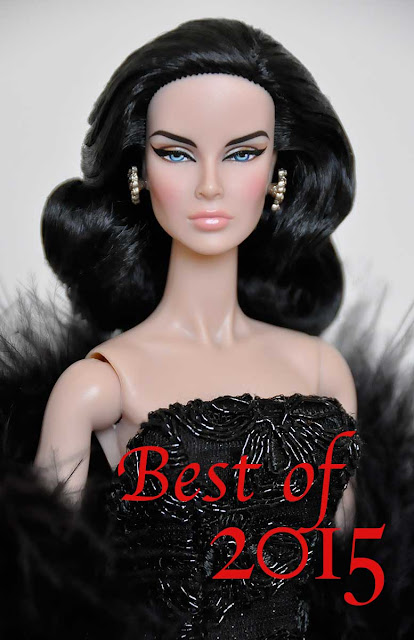 Posted by Desperately Seeking Dolls at 5:56 AM 2 comments:

The theme of "diversity" from 2013 continued into 2014.  My doll collecting was seriously branching out: Victoire Roux, Poppy Parker, Color Infusion, NuFace, and Fashion Royalty.  Mattel had such a great showing in 2013 that I was disappointed in 2014 with no Barbie line dolls being represented.

It was in 2014 that I seriously started cutting out doll lines.  I have sold almost all of my Dynamite Girls, Tulabelle, and all 16" Fashion dolls.  I have favorite doll molds and it is very difficult to let go of many of them.  It was in 2014 that I actually listed the top 5 dolls by character, with the best of each character being represented.

My Number 1 spot in 2014 was given to the character Elyse Jolie.  The version chosen as best was as big a surprise to me as anyone else.  When Montaigne Market Elyse Jolie was released (IN FRANCE) collectors were in a frenzy to acquire her.  Her secondary market price NRFB is usually over $500.  I had decided that she would not be joining my collection, when I found her being sold nude for less than a new doll.  I snapped her and never looked back.

While my other dolls were wearing blacks and neutrals, Montaigne Market Elyse Jolie decided to make a statement.  She is wearing a powder blue Mattel gown and boa.  (It is called "Between Takes" and is often found on e-bay for about $30.) 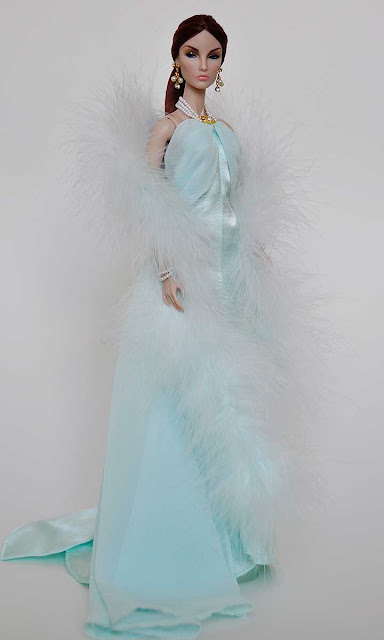 And a closeup of a remarkably beautiful face deserving of #1 of 2014. 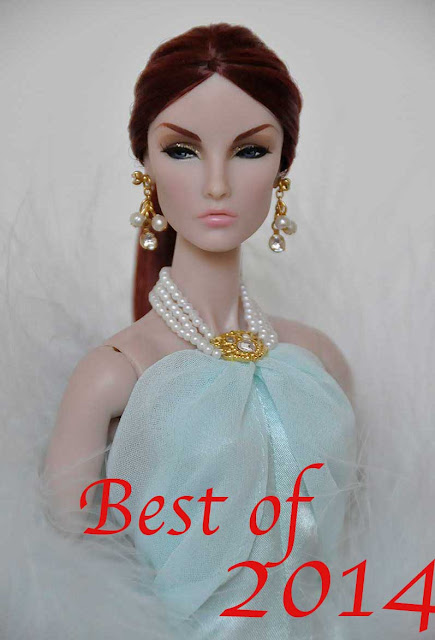 Posted by Desperately Seeking Dolls at 5:46 AM 2 comments:

2013 was a VERY GOOD year for doll collecting.   This was the year that Silkstones made a serious comeback - Boater Ensemble, Luncheon Ensemble, and Cocktail Dress Ensemble were all released.  Although none of these dolls reside here, my girls are enjoying the clothing; they still represent some of my favorite ensembles presented by any doll manufacturer.  This was also the year of the Herve Leger Barbie!

Poppy Parker had an amazing year.  It was the first time I collected the "whole line" with At the 1965 International Fair.  Surprisingly every single one of the Poppies from that group (all six of them!) still live here, as does Young Sophisticate who is one of my very favorite Poppy Parker dolls ever produced.

Victoire Roux established herself in the hearts of collectors, Integrity Toys showed its creativity with the "mix up" dolls of Funny Face, and Mattel released one of my favorite accessories ever, The Barbie Look Wardrobe, the only non-doll to ever make it into my "Best of" countdowns.  (I own 12 of them; one for each color of clothing)

With all this diversity, my collection had a serious growing pain in 2013.  In addition, my best doll buddy in the whole world, Reese, had a friend who wanted to attend the IT convention that year and needed someone to pay the convention fees.  I would never had been able to afford the secondary market prices on the convention dolls that year.  They still represent some of the best dolls in my collection!  2013 was the first year that I could not make up mind about the #1 spot.  In the end, I just had to put both dolls there.  To me, they represent Integrity Toys at its best.  The face ups, hairstyles, and ensembles were all perfect.  I've never redressed either of them.  They have a special spot in my collection. 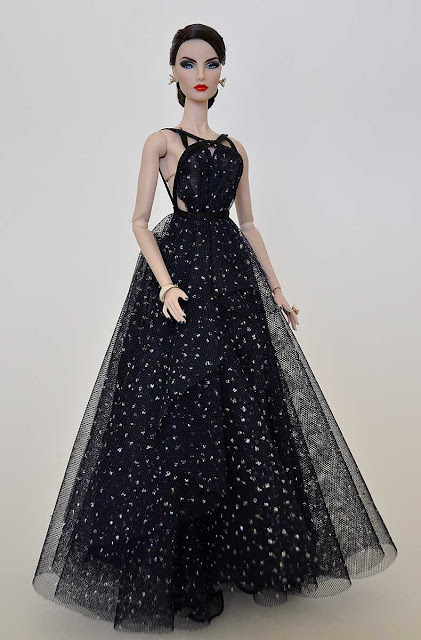 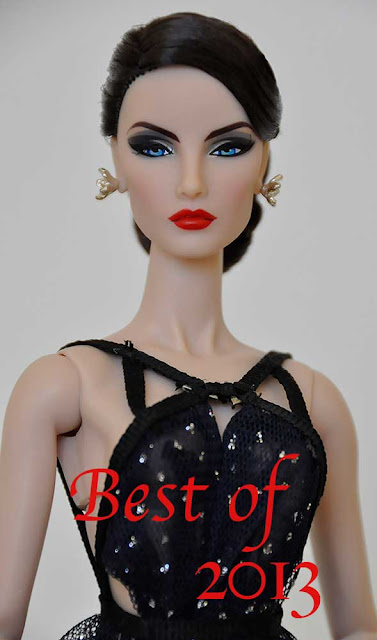 We can't leave out After Tonight Eugenia Frost. 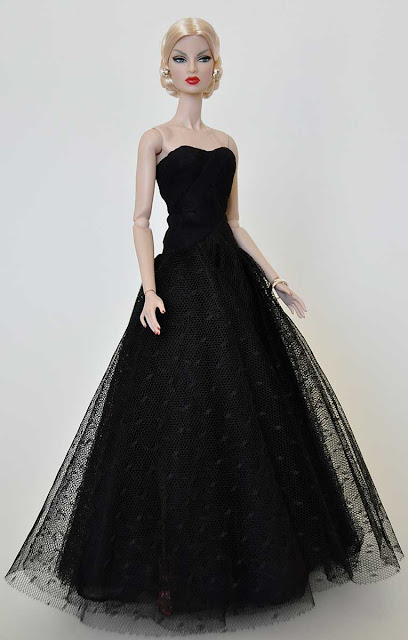 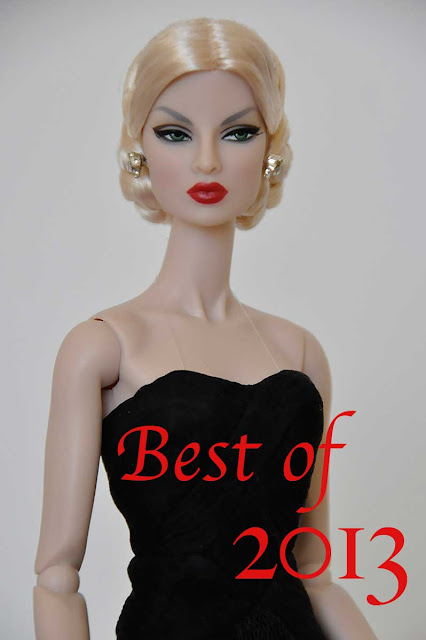 This is the photo from the 2013 countdown that just solidifies my decision.  So much glamour! 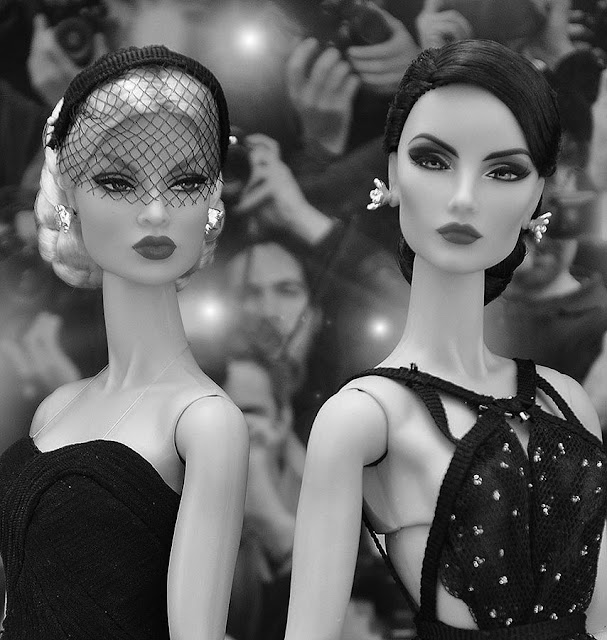 I was asked in a comment about attending conventions.  I am a public school teacher, so it is very difficult for me to attend a doll convention in October.  In my last school district, we did standardized testing in October and teachers were not allowed to take personal time off during that time.  In our state, teachers do not earn "vacation time".  Teacher are allowed three personal days each year that are taken from their sick leave.

The only convention I ever attended was the 2012 Tropicalia Convention.  (After I retire, I hope to attend more.)  Several of those dolls made it into my "Best of" list that year.  However, it was a NuFace exclusive that made it all the way to #1.  Here is Glam Addict Giselle, wearing Dark Romance's gown, doing her best Angelina Jolie imitation. 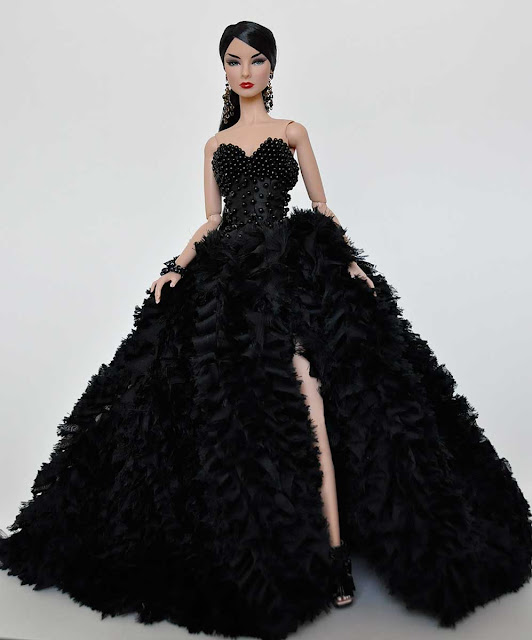 Since it was 2012, I did a top 12 that year.  Seven of those dolls still reside here, including the beautiful Glam Addict. 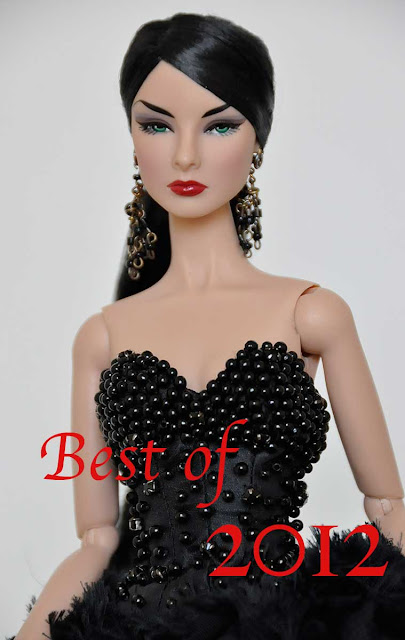 I remember doing my list for 2011 and thinking that it wasn't a great year for doll collecting.

My number 1 from 2011 is still a favorite of my Kyori 1.0 mold.  She was No Reservations Kyori Sato from the Integrity Toys convention.  Here she is borrowing Agne's Drama Behind the Drama gown. 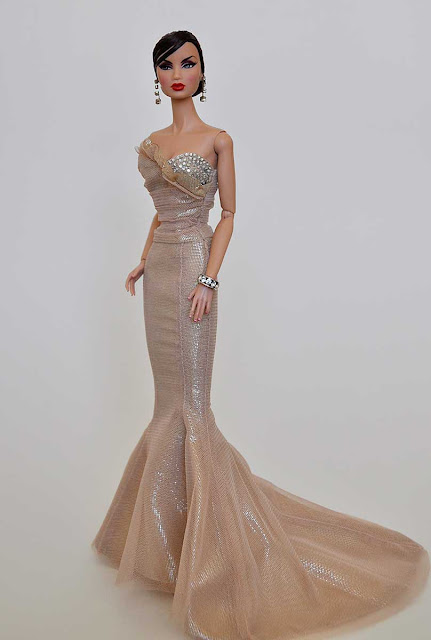 I love her face up and hair; it is different from other versions of this mold.  She has a classic elegance that I really appreciate. 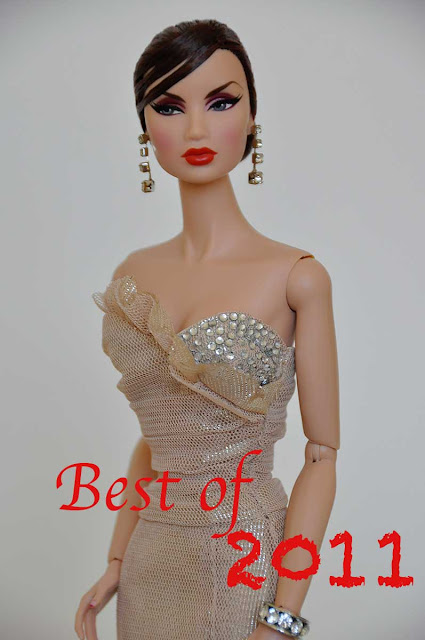 Posted by Desperately Seeking Dolls at 7:45 PM No comments:

Oh my!  It's already December; where did 2016 go??   I was looking back through my blog archives and realized that my reviews started in 2010.  Where has the time gone?

In preparation for the 2016 countdown, my winners from previous years thought it would be nice to take a little trip down memory lane.  Since they heard the Supermodel Convention was "gown heavy", they decided to put on some finery.

Although there was no official "countdown of dolls" in 2010, I did blog that I had two favorite dolls from that year.  The first was Smoke Screen Dania Zarr.  She was a table centerpiece from the Integrity Toys 2010 Convention with an edition size of 150 dolls.  Smoke Screen continues to be one of my all time favorite dolls. 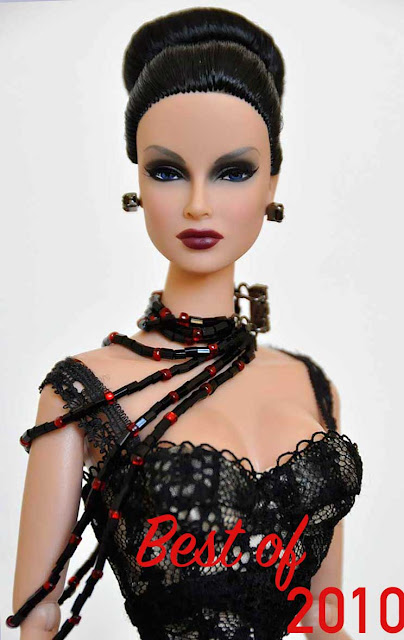 And the second was Regal Estate Agnes von Weiss from the Australian Doll Convention. 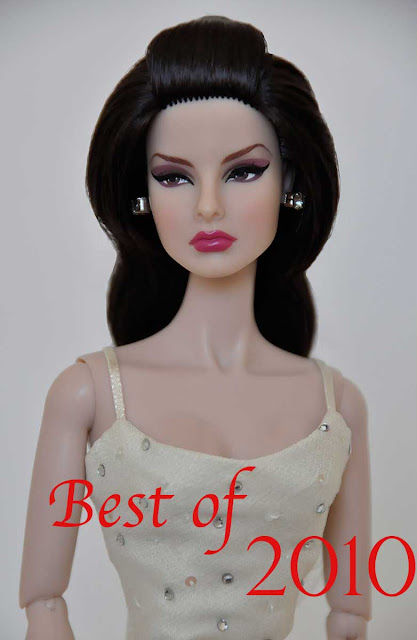