I couldn't let her birthday go without a tribute.  Ken takes Barbie to a secluded island getaway on his yacht! 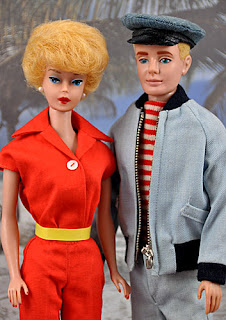 Both Ken and Barbie are authentic vintage dolls without any enhancements.  Ken is wearing Yachtsman from 1952 except the Captains Hat which I do not know the history for.  Barbie's capris, blouse and belt are also from 1952.  So this is their 50th anniversary together, and Barbie's 53rd Birthday.

I hope to post again over my long weekend.  Teachers in my county were given a day without pay on Monday due to budget cuts.
Posted by Desperately Seeking Dolls at 11:22 PM 2 comments:

Some of the dolly news since my last post.

First, the latest Mattel Vintage Reproduction Ponytails have started shipping.   They look really nice.  You buy one doll and then get four vintage repro outfits, an outfit for each season, for $175.  I would be all over this if I didn't already own the outfits selected for reproduction. 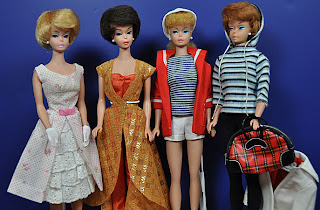 Since I have collected vintage for some time, I have several dolls and outfits.  I like what Mattel did with their reproductions, but it really affected Vintage pricing and sales.  A positive thing though is that it does allow more collectors to enjoy the likenesses of the original dolls and the design of such lovely clothing.

Speaking of clothing, Vin sold me the Business Class Anja dress.  Since the Glam Addict has been released, the Anja dress has become very sought after.  I saw an episode of Royal Pains where one of the characters was wearing a very nice print summer sheath and had paired it with a sweater.  Here is Going West (with her hair released from the bun) copying that idea. 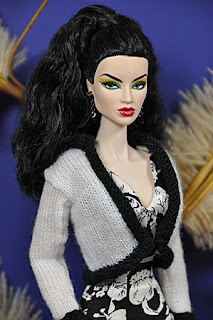 While I was redressing, I decided to put Holly's sweater/skirt outfit on one of my favorite NuFace gals.  Here is Style Mantra Eden.

I knew this would look great on the taller girls.  I love Eden so much I had to show a closeup. 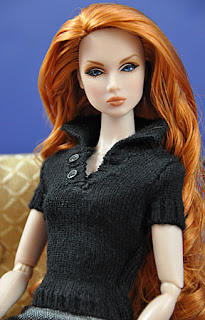 This forced me to try more wardrobe choices on Holly.  Here she is in London Mist Imogen's outfit without the shoes.  Holly cannot wear any shoe with an arch.  These were some Doc Martins I got from the internet.

Then I tried on a Fashionista Dress. 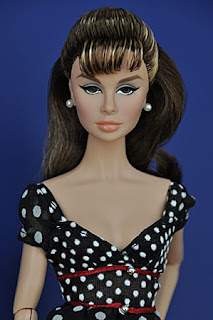 I think she looks more like Mary Tyler Moore than Audrey Hepburn.  "Oh, Mr. Grant!  How about I try on Silkstone's A Model's Life blouse and pants?" 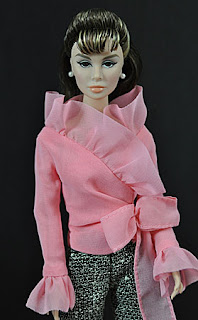 Then, we tried Little Red Riding Hood with a Pulip skirt.

That turned out rather interesting. 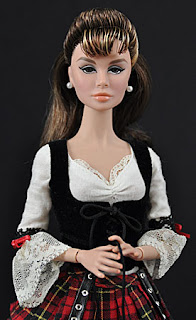 So, I got out I Love How You Love Me Poppy's ensembles. 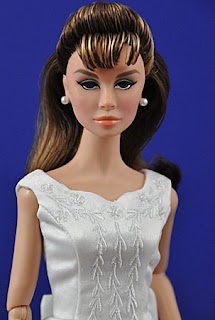 This morning, Holly got up and wanted to try on some foundation garments.  First we tried High Tea and Savories.

It turns out Poppy liked this NuFace set better. 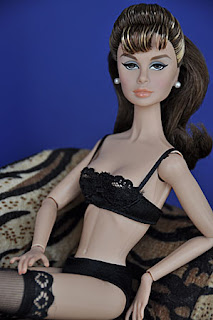 We finished dressing to go outside.  It was chilly and windy.  She is wearing the Boots to Urban Outfitting Nadja, Star Doll's jeans, the coat and knit cap from Dynamite Girls Wave II Reese, and an unknown green scarf I've had forever and have no idea where I picked it up. 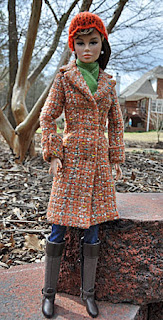 Miss Holly is turning out to be a very versatile doll.  I know she's different from other Integrity face-ups, but I think that is one of the things that draws me to her.  I can't wait to see what our community artisans do with her.  I think her eyes would look much better with the irises filling the opening.  Like I said, she's very interesting.  Not for everyone.  But very interesting. 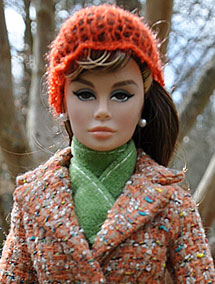