I keep hearing the Van Morrison song today.  It's hard to get it out of your head!

I guess the saying,"the third time's a charm", applied to my City Prowl Eugenia.  The second replacement came this week.   I was so pleasantly surprised when I opened the box from Asia. 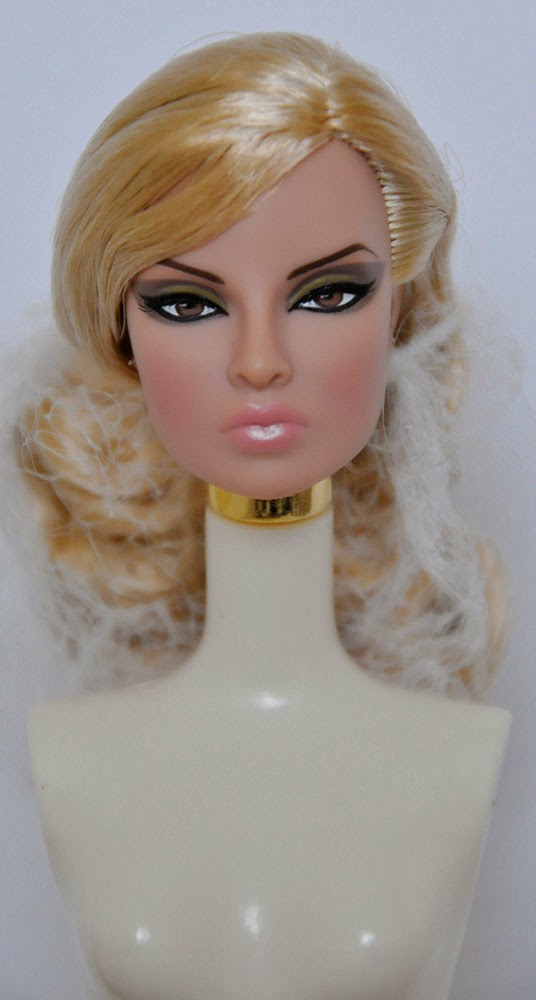 I was very frustrated that it took several months to finally get a doll without flaws when I paid for her last spring.   It was fortunate that she was worth the wait.

I really do love this Eugenia.  I like the thinner eyebrows and neutral palette with dark liner.   I think she is actually one of the better screenings produced; she looks a little upset about something (probably that it took three heads to get a complete doll!).  I bet City Prowl will redress beautifully, but, for now, I am going to enjoy her in her original ensemble. 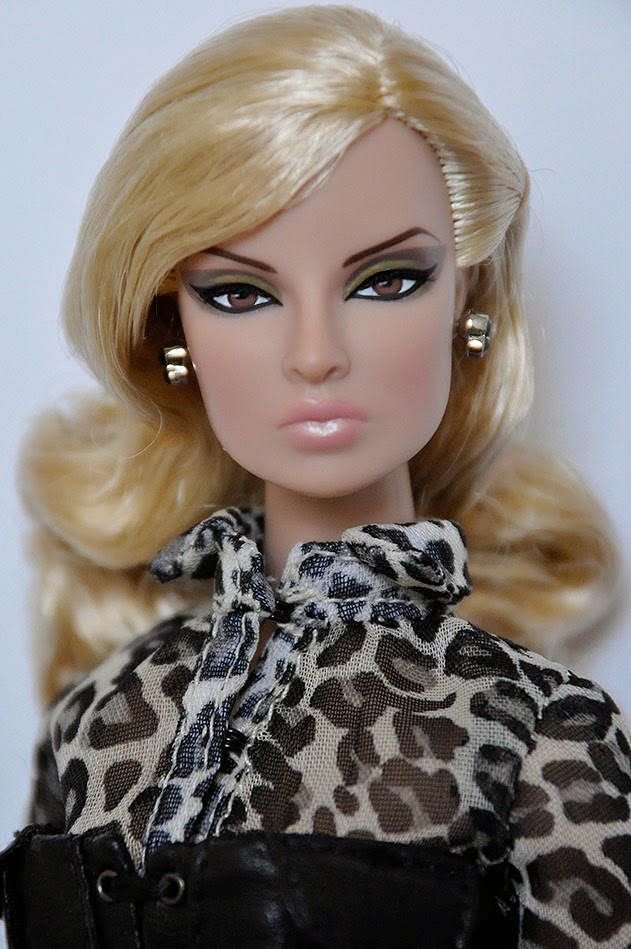 Also arriving last week was the first Gloss Convention doll that I purchased secondary market.  She was the table centerpiece at the Thursday night welcome dinner.  Her name is Sheer Sensuality Vanessa Perrin. 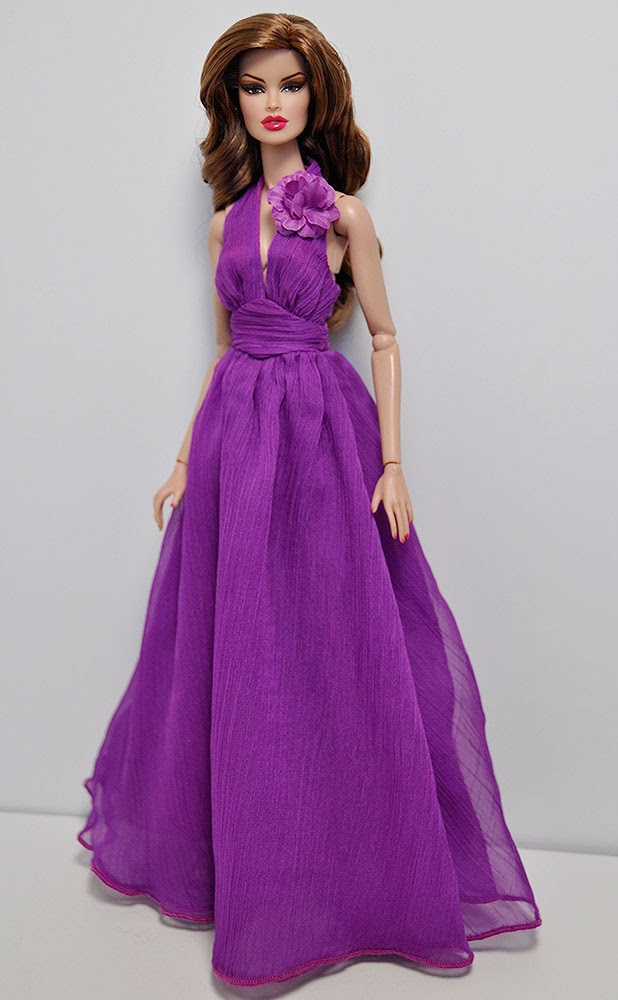 She is mold 1.0 (a personal favorite) and was limited to 350 dolls.  Attendees numbers were drawn to determine who could purchase her. 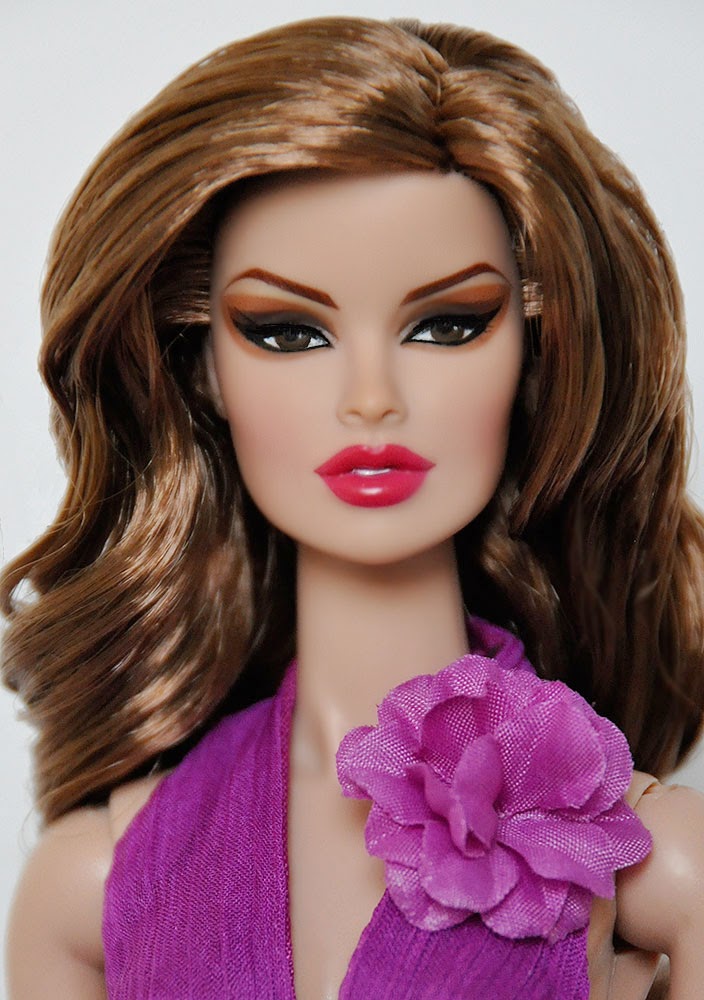 At my house, the dolls don't usually stand around in gowns.  The moment I purchased this doll, I had a specific ensemble in mind. 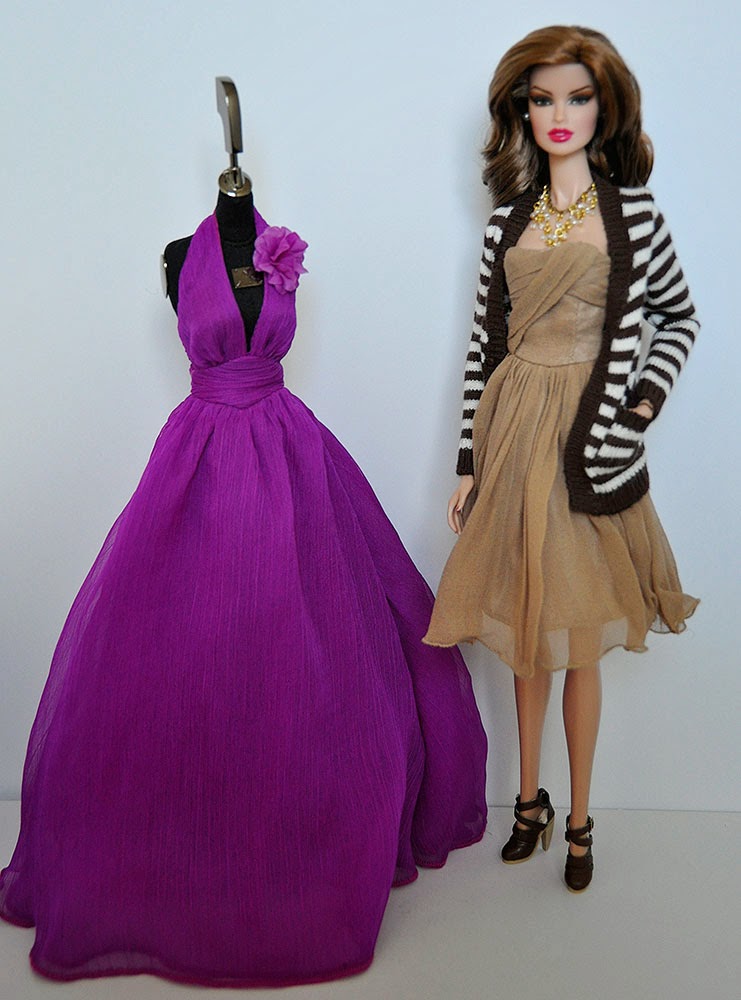 I so love Sheer Sensuality.   I don't have a Vanessa with this hair color or style.  Another beautiful brown-eyed girl! 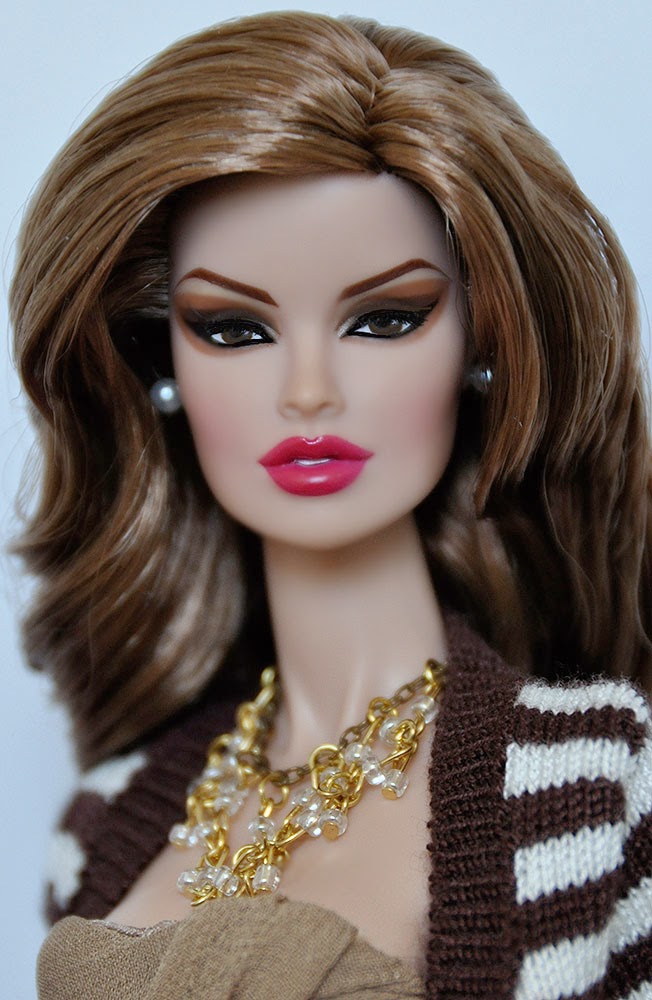 I had made plans earlier this year to attend this convention, but life got in the way.  Since my husband and I chose to pursue retirement plans, we agreed that I could buy a couple dolls on secondary market to make up for my missing the convention.

This entry will not include the ITBE dolls, Color Infusion dolls, or the convention collection that was sold to attendees.  It will focus on those dolls actually presented to attendees because these are the only official photos released to W Club members from Integrity Toys so far.  All photos are owned by IT and are used with permission.

When attendees arrive for the convention, they get a registration bag of goodies.  In the past, the bag usually contained an ensemble as a teaser for a future doll.  This year the attendees actually got a doll.  She is an ITBE version of Erin Salston.  (There apparently isn't a name since one wasn't included in the official release; she is being referred to as "Souvenir Welcome Doll".)  The vest, hat, and jewelry were in an accessory set attendees received later.  Edition size was 500. 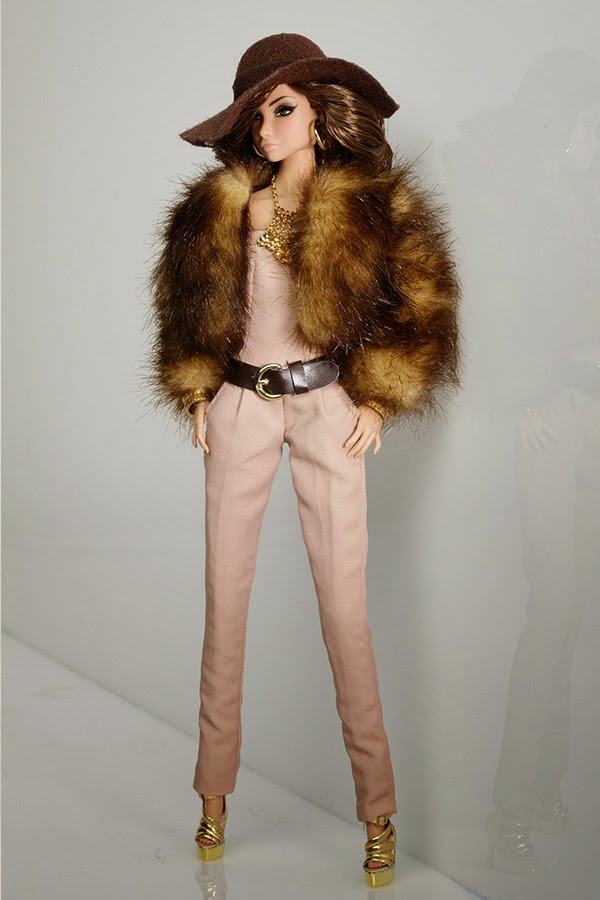 The first event was the Welcome Dinner on Friday Night.  Attendees were greeted by the table centerpiece, Sheer Sensuality Vanessa Perrin (mold 1.0).   We are getting down to business now.  When I saw this doll, I actually swooned.  Vanessa mold 1.0 is a favorite mold around here.  With forward glancing brown eyes and this gorgeous hair color, I knew she would be my first secondary market purchase.   There were only 350 in her edition size and table numbers were drawn to determine which attendees could purchase her. 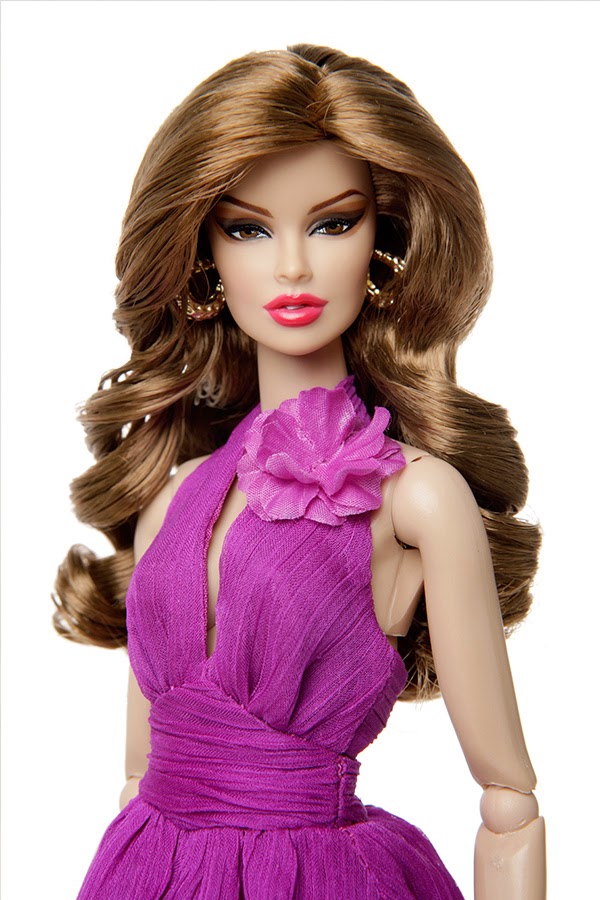 Following dessert, attendees were shown a slide of Le Smoking Adele Makeda (mold 2.0).   The actual dolls were stuck in customs, but each attendee was given this doll with an edition size of 500 dolls.  Although I loved the promo photo, the white pantsuit, and the gold watch, I waited until I saw actual production photos.  Mold 2.0 of Adele Makeda is another favorite around here. 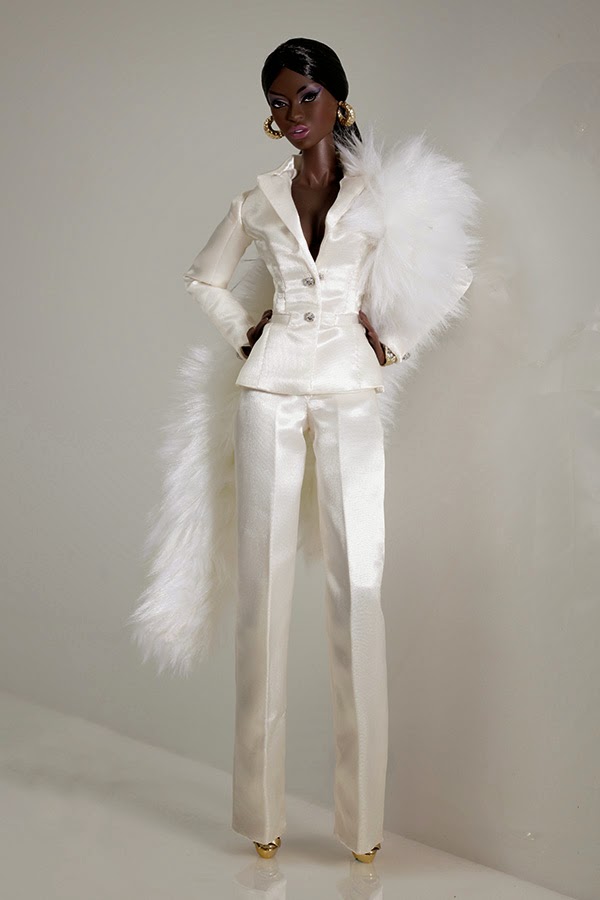 The next day was the convention luncheon.  This year's focus was Poppy Parker.   The centerpiece doll was called Angel in Blue.  This was definitely a nod to the disco era of the 1970's.  Her edition size was 300 and table numbers were again drawn to determine who could purchase this doll. 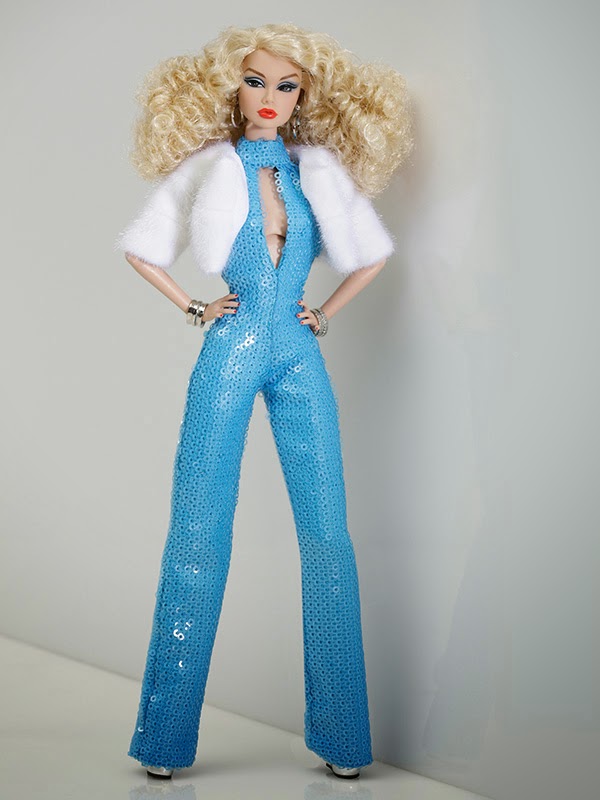 Attendees were rewarded with another giveaway.  This time it was Starlight Poppy Parker, edition size 500.  Since I "do not collect Poppy Parker", these probably won't be sneaking into my collection. 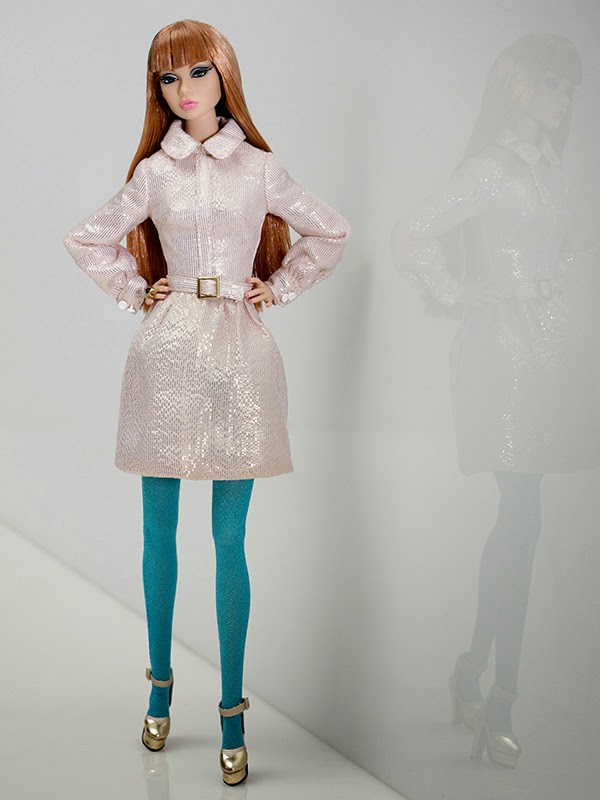 Friday night was set up as a costume contest "bazaar" room with shopping opportunities.  Since there was no sit-down dinner, there wasn't a table centerpiece or giveaway doll.   Attendees were given a red version of the dress, with alternative hemline, that Sheer Sensuality was wearing the previous evening.

Saturday's luncheon is exclusive to W Club members only.  There was a lot of excitement this year because attendees were eager to see the unveiling of the revised NuFace body.  The centerpiece was Sensuous Affair Giselle.  Every attendee had the opportunity to purchase her (edition size 400). 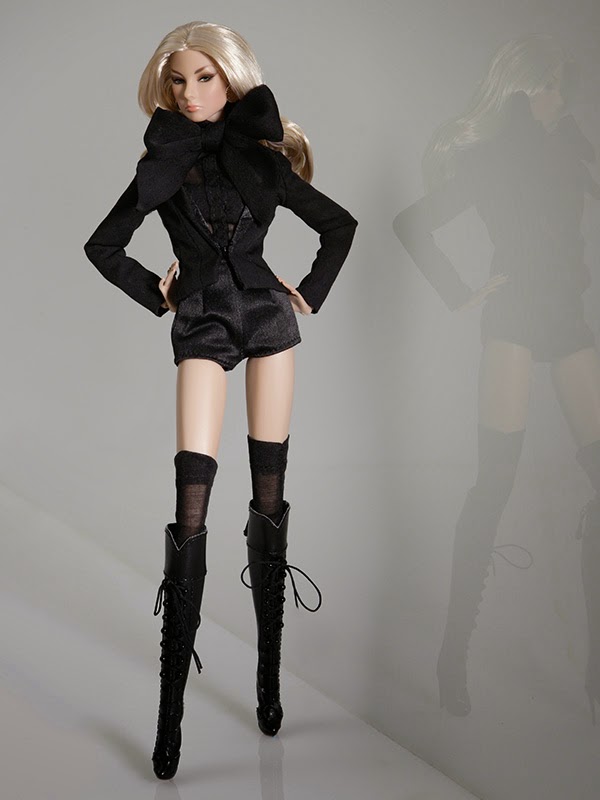 This year's luncheon ticket was more expensive than previous years, but all attendees got a doll for attending.  She was Chrome Noir Erin Salston (also 400 dolls in the edition size). 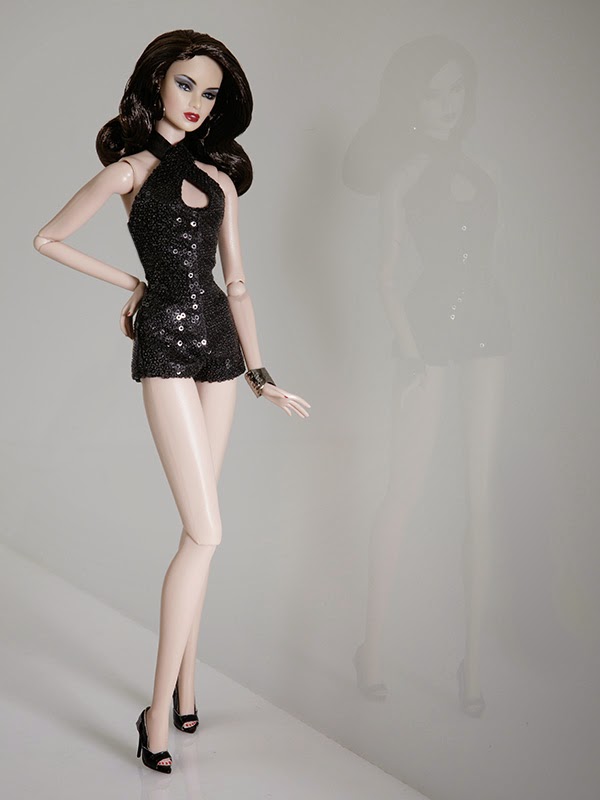 As a bonus to convention goers, all attendees were given the opportunity to purchase a third NuFace doll, Evening Siren Ayumi N with a new sculpt.   She was an IT Direct Store Exclusive with an edition size of 600. 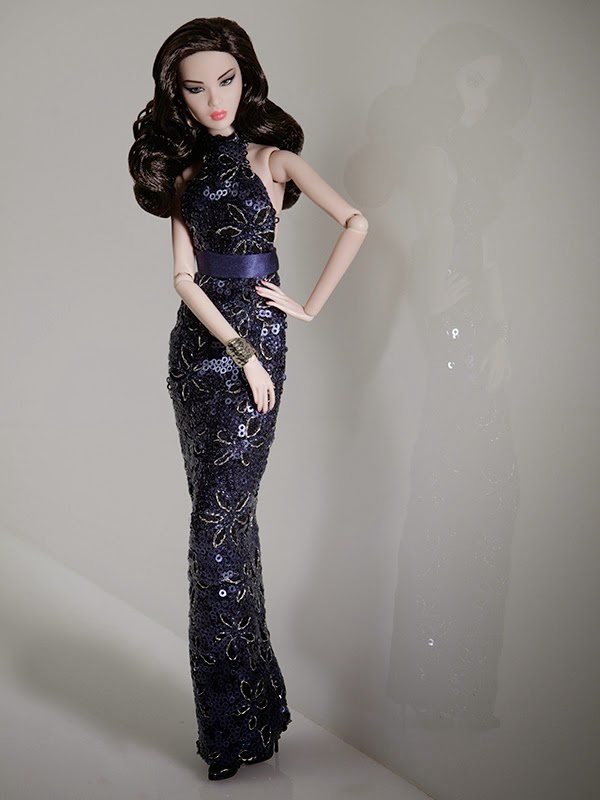 I wanted to include a closeup of her face since she is a new sculpt. 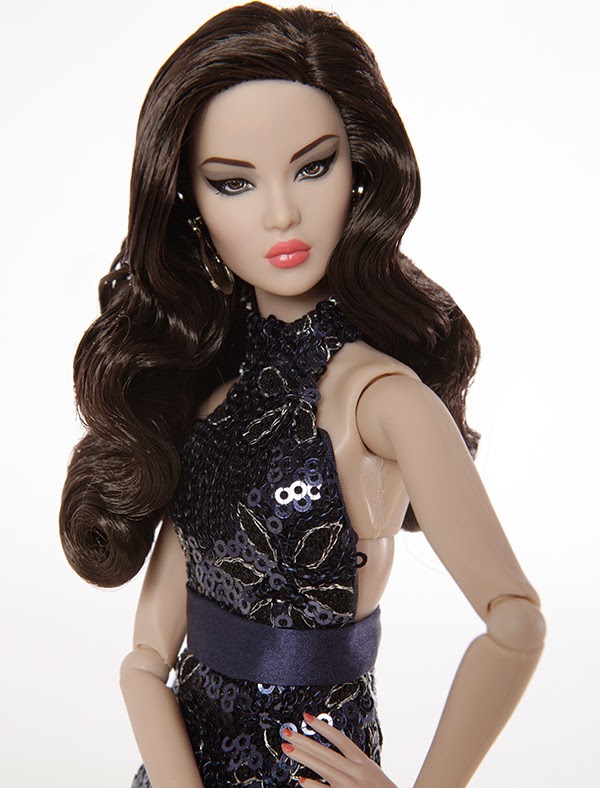 NuFace made one additional appearance at the convention.  Tantalizing Dominique Makeda was a workshop doll.  She is in an edition of 300 dolls. 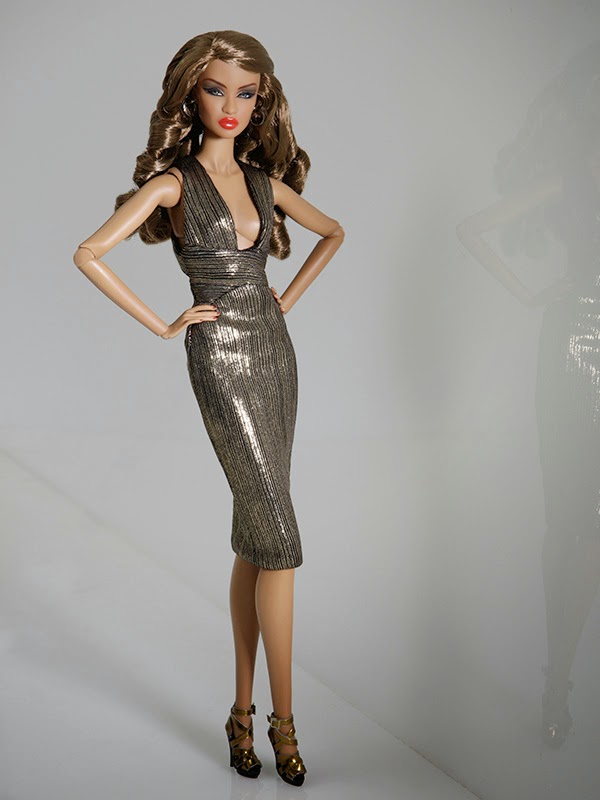 The best is always saved for the Convention Banquet on Saturday Night.  When attendees arrived they gasped to find the centerpiece, Intrigue Elise Jolie.   There were only 300 in the edition size and numbers were drawn again to determine who could purchase her.  She is wearing a miniature version of an actual Jason Wu design. 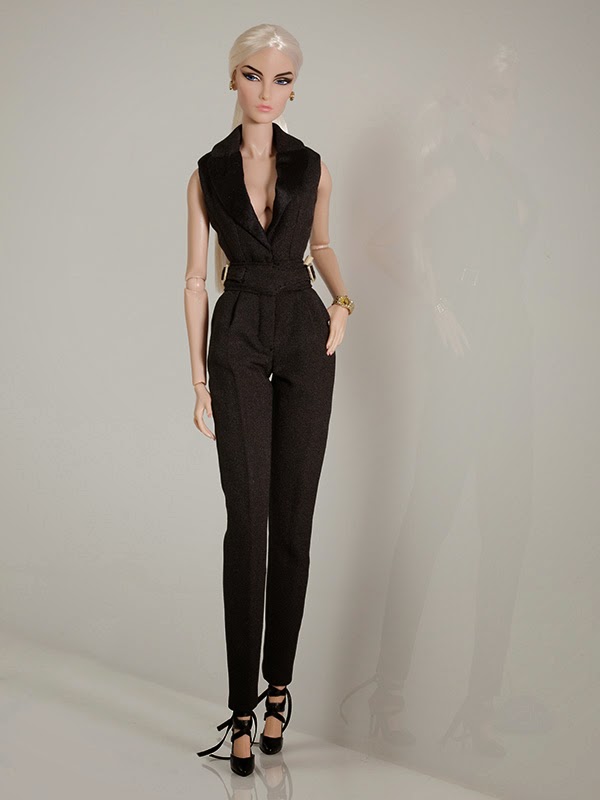 The title of "Convention Doll" was reserved for the queen bee of Fashion Royalty dolls.  All attendees received Intimate Reveal Agnes Von Weiss.  (Edition size 500)  This doll was also wearing a miniaturized version of a Jason Wu original design.  It has been noted that this doll is a fusion of Silver Zinger and Optic Verve.  She is already selling on secondary market for prices beyond any doll released in the past few years. 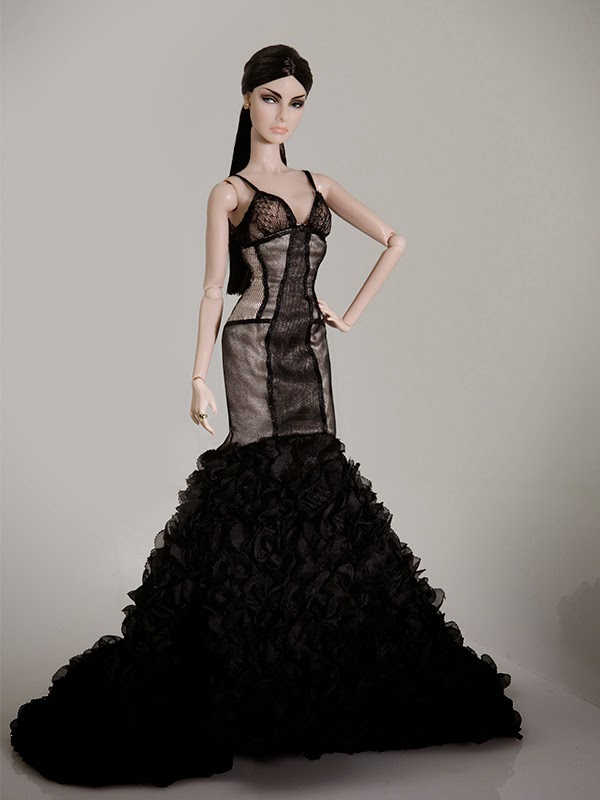 It's hard to judge a collection without having them in front of me.  I personally believe there was something for everyone at this convention.  There was fun, hip, sophisticated, elegant, casual.  You name it, you went home happy.   It's nice when the offerings are so diverse.

Upon reflection, I should've taken the proxy route.  (It seems like MANY collectors did that this year - it would be interesting to see how many proxies were in attendance.)

Since I don't have deep pockets, I have only purchased three dolls (so far).   Sheer Sensuality Vanessa Perrin, Intrigue Elise Jolie, and Le Smoking Adele Makeda.   I can't wait for them arrive!  Each of them brings something new and special to my collection.

This post was going to about the IT Convention that took place in Orlando this past weekend.  Unfortunately, W Club members have not received multiple e-mails detailing the dolls presented at the convention like we have in the past.  There was  a great deal of logistical nightmares at this convention with shipments not arriving until Saturday.  I feel for IT and the stress they've been through this year.

So, I will focus on something more positive.   On Friday, I received my first Amber doll.  Amber is a frenemy of Ellowyne Wilde.   Taking time away from 16 inch dolls, I completely missed this character. After much research, I finally chose Essential Amber Brunette to represent the character in my collection.  Here she is in the box.

I'm not a big fan of wigged dolls and was excited to find this one with rooted hair. 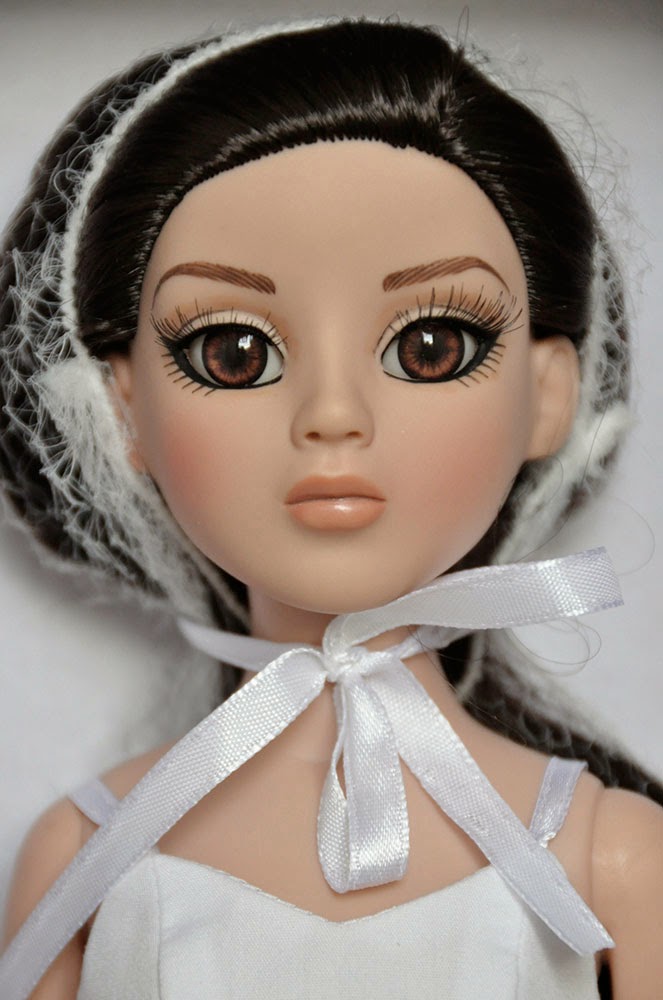 This weekend was the Collector's United Doll Show in Atlanta.   It took me 90 minutes to get there, and I was a little disappointed by the dealer attendance.   I only saw 5 dolls from the Ellowyne line, a couple wigs, and a handful of outfits.  There was nothing that I needed.  I did spot an Urban Vita knit ensemble. 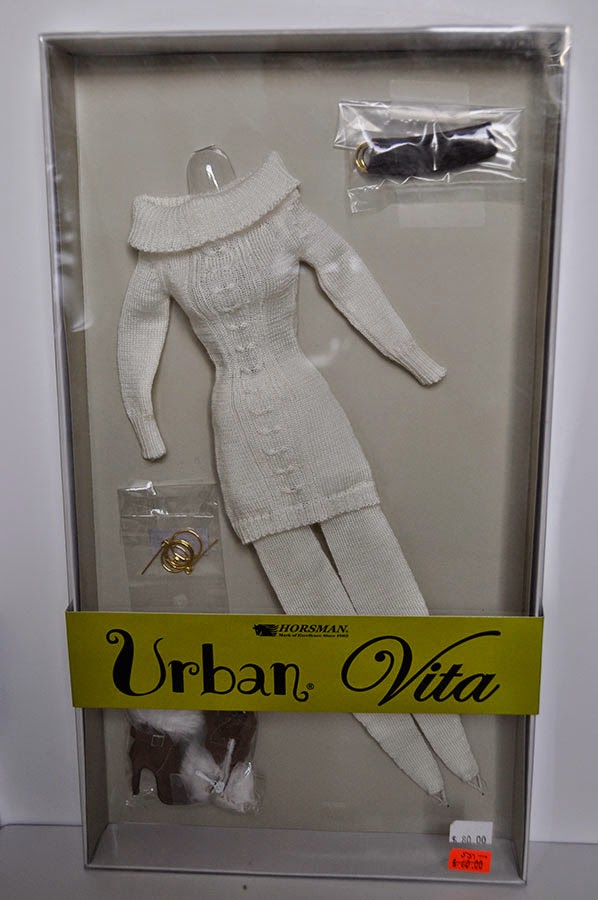 I got it for $40, hoping it would work with Amber.  (The temperature was in the 30's outside, so I guess I was feeling the need for winter clothing.)

Everything worked except the boots.  I like it!    I think the sweater would look great with blue jeans or black tights.  There is some mix n match possibility here.

Brittany was very upset about this purchase, "I know Halloween is trick or treat, but I was hoping for a bag of candy or something.  Bringing Amber into this home was definitely a trick!" 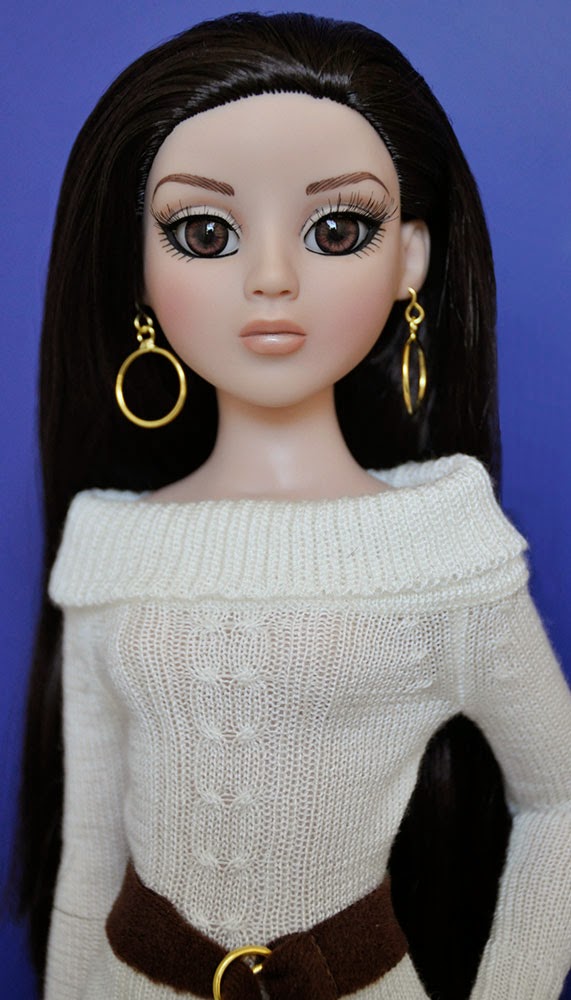