I had to use a question mark in the title of this blog entry.  This gift set has me confused in many ways.  Whenever Integrity Toys (IT) has an online reveal of new dolls, the W Club members are given an opportunity to purchase an exclusive gift set.  Last year it was High Visibility Agnes Von Weiss.

High Visiblity Agnes, though not a favorite for me personally, came with a purse, hat, two pair of shoes, three bracelets, earrings, sunglasses, a long mermaid skirt, a pencil skirt, a brown crop jacket, and a bustier.  She cost members $135. 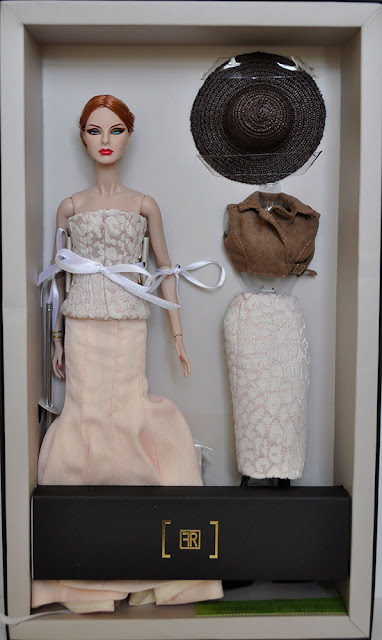 This year's offering was Royal Treatment Veronique Perrin.  She came with an evening gown, teddy, sheath, coat, a pair of earrings, one bracelet, a purse, one pair of shoes, and a gloved pair of hands.  Her cost was $225. 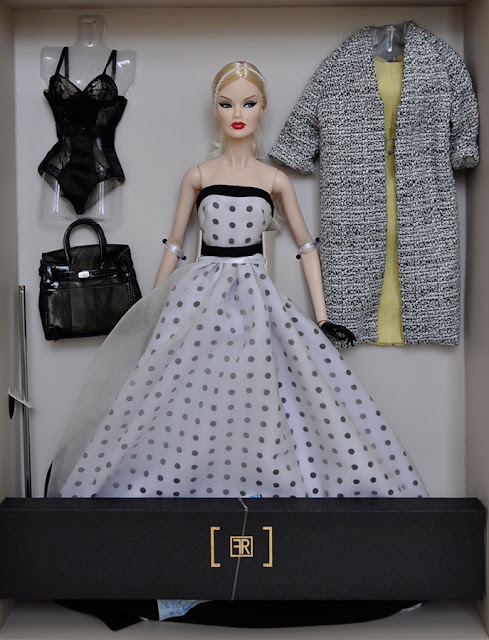 Many W Club members complained about the rise in cost for a gift set with such minimal accessories;  others were uncertain about the doll.  When both combined, less than 400 were sold.  This is quite shocking for an exclusive doll that is made to order based on purchases.  The actual production doll has a nice face up in my opinion. 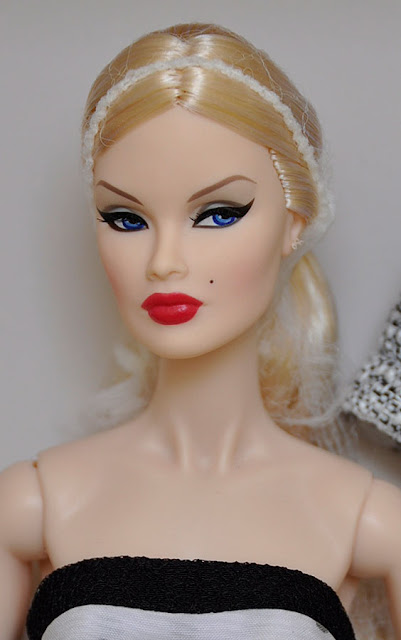 This gown has received no fanfare.   It is unlined (unless you count the polka dot underskirt as lining - there is a chiffon overskirt).  It does have a satin slip sewn in.   The chiffon overskirt is sewn directly onto the black hemline which, in my version, is sewn incorrectly.   I believe the pattern was too complicated for the unskilled labor who tried to duplicate it. 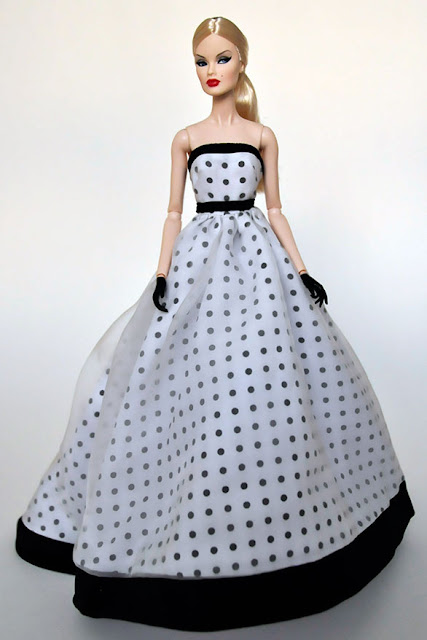 I added a crinoline underskirt (from Talking Drama Adele) and replaced the thin belt with a black ribbon and bow.  It helped, but I think I will be contacting Patient Care about this garment.  I don't care for the earrings she came with, so I added a different pair. 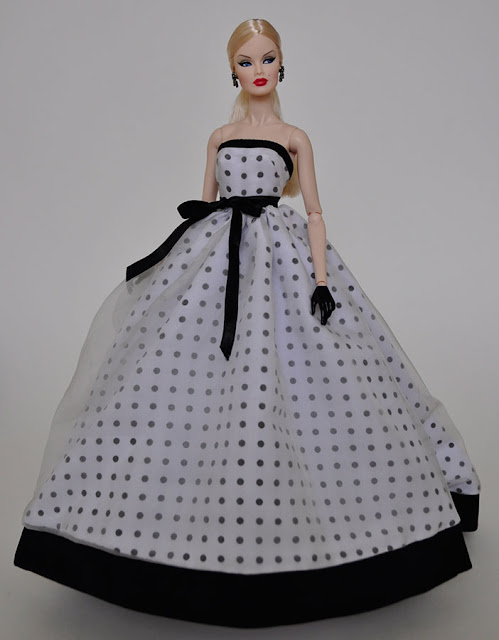 Many collectors are looking for the sheath on secondary market - I bet they'll be looking for a long time since most who purchased the collection wanted the sheath as well.  The belt is a real booger to close.  It's best to stretch the fabric and thread as much as possible off the doll before trying to close it around the waist.  It's quite a well made, lined, sheath.

The box coat is a nice light weight tweed but doesn't seem to go with the summer yellow dress.  I added a hat and pin to help the look a little. 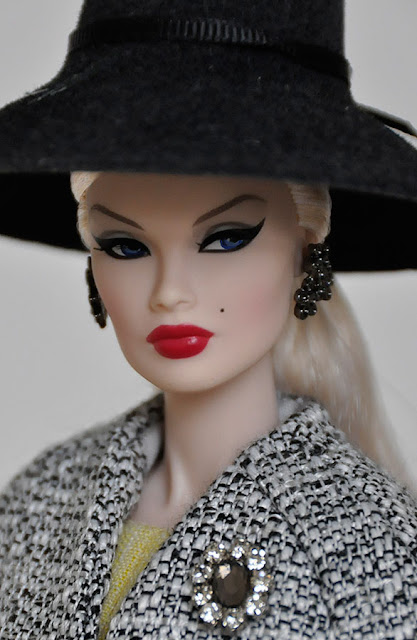 The lingerie is quite good!  But a pair of thigh high black hose would've been a nice addition. 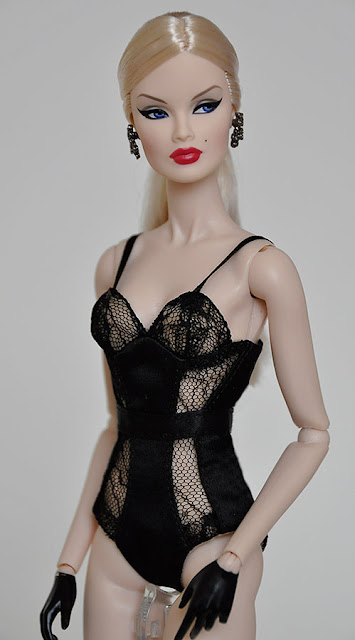 For me the worth of any doll is how she looks redressed.  Here she is wearing her sister Full Spectrum's red dress. 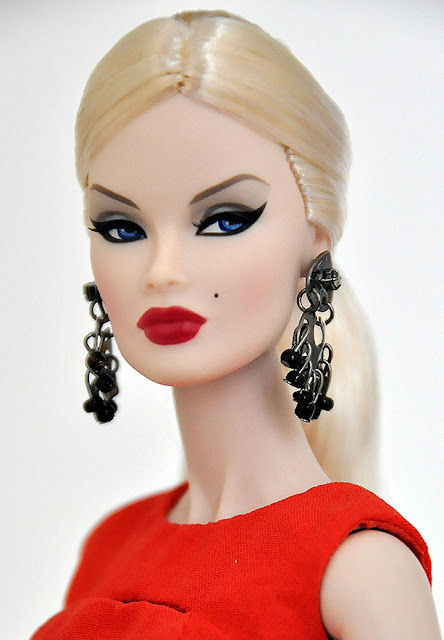 I wanted to show you the hairstyle from the side. 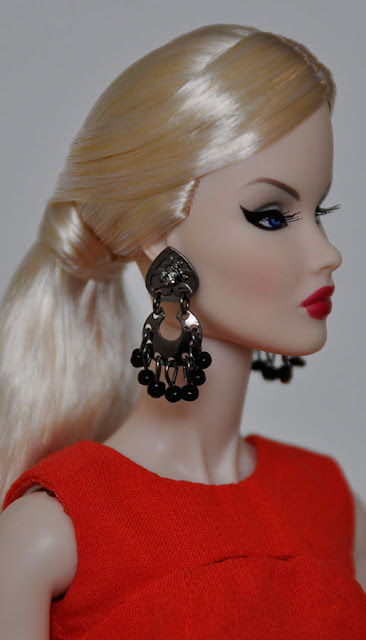 I think she looks great in black. She borrowed Dovima's Woman Who Thinks black dress. 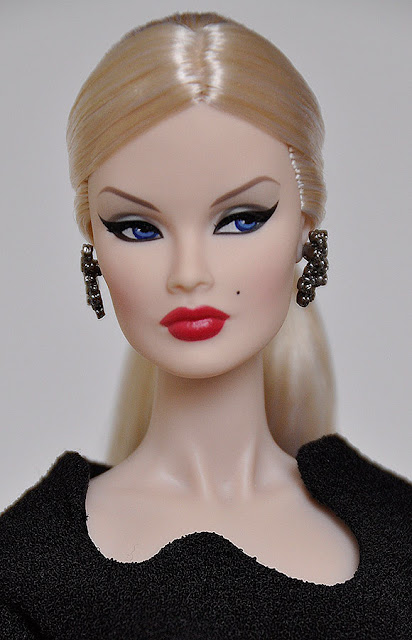 And since so many are comparing her to Agnes, here she is with Aristocratic (released earlier this year). 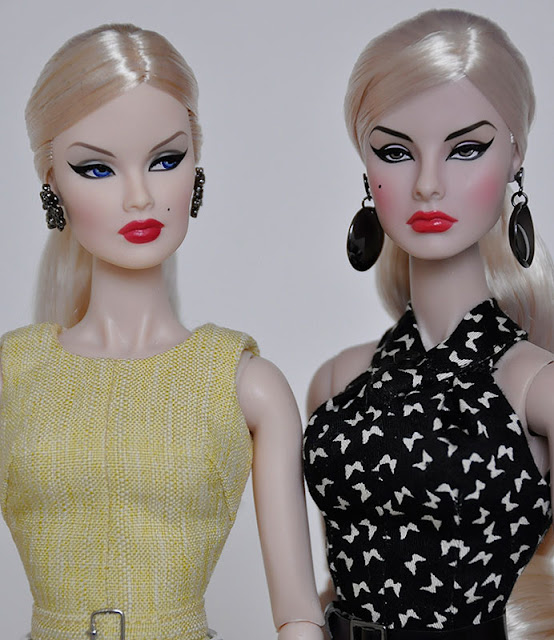 I think she actually holds her own and the two complement each other.  My final thoughts, for what they are worth:

I believe IT missed an opportunity here.  It wouldn't have been a major cost to include another pair of shoes, some hose, better jewelry (including a pin for the coat), and a hat.  That would've tipped the scale.  I believe the Royal Treatment is a lovely doll, but they overcharged for a gift set that wasn't executed well.  It's left a bad taste in the mouths of their loyal collectors.
Posted by Desperately Seeking Dolls at 12:58 PM 3 comments: