You are probably wondering what happened to Cabinet 1 Shelves 3 and 4?

When I started pulling my dolls to organize them, I wanted to keep them in order by year of production and then by body type.  I started with all the dolls pre-2006 that had replacement bodies to the Tall FR body.   There were enough to fill up an entire shelf (Cabinet 1, Shelf 1).  Organization, Cabinet 1, Shelf 1

After completing Cabinet 1, Shelf 2, I realized that I had some pre-2006 dolls that still had not been put in the display cabinets.  The problem was that these dolls had all been put on FR2/FR6.0 bodies!   I knew I needed to figure out where to start displaying these dolls while leaving room on previous shelves for other dolls produced between 2006 - 2014 that were still on the Tall FR bodies.  Also, I have reserved the bottom shelf of Cabinet 1 for my dolls' wardrobe boxes.

Shock Bon Bon Vanessa Perrin (mold 1.0) from 2004.  She was put on one of the first released FR2 bodies because he skin tone is difficult to match.  Her original sweater still fits.  I added a Randall Craig skirt. 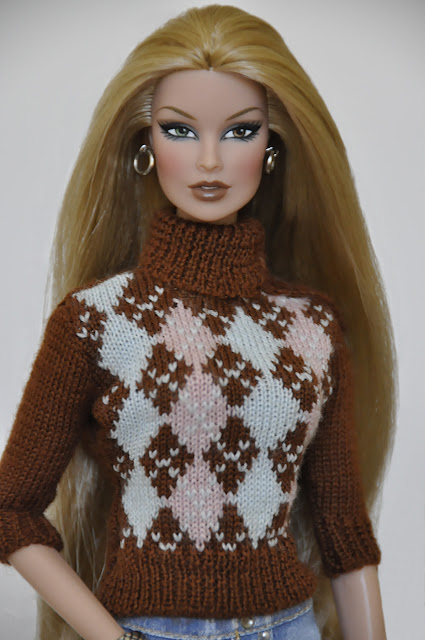 Since I wanted to display her in her original gown, I had to put Talking Drama Adele Makeda (mold 2.0) next.  (The trains of the dolls' gowns can drape over the back of the shelves because there is a gap between the shelf and the cabinet wall.)  Talking Drama Adele Makeda is from 2007 with an edition size of 500.  I used a replacement body produced by IT in the "Black" skin tone.  The gown still fits beautifully! 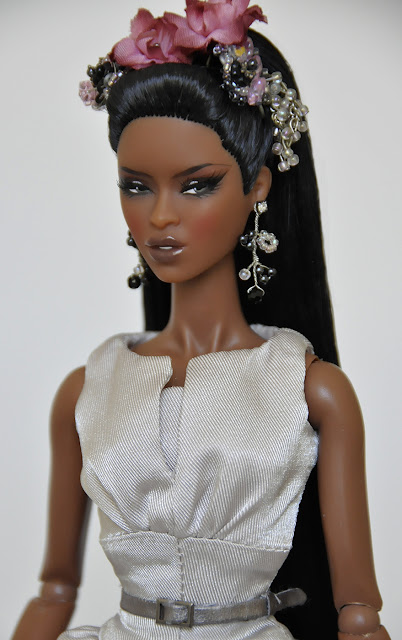 Cosmetic Takeover Natalia Fatale (mold 1.0) is also from 2004 and rounds out the back row (since Talking Drama's gown is so full, I could only fit three dolls across the back row).  She was the very first Integrity Toys Convention Doll and was only produced in an edition size of 300.  Her body is from the second round of "Latino" bodies produced by IT.  Her original ensemble actually looks better on the FR2/FR6.0 body! 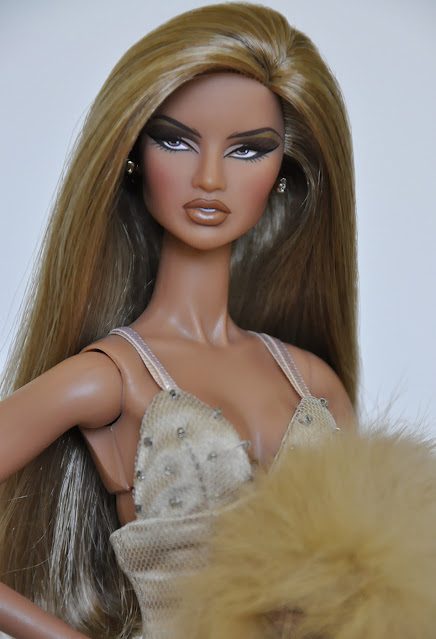 Bodacious Adele Makeda (mold 2.0) is from 2005.  She not only took the ensemble from Time and Again Adele (2015), she stole her body!  She was a difficult doll for which to find a body donor because there are some reddish hues to her skin tone; she cannot use the mass produced replacement bodies in the "Black" skin tone! 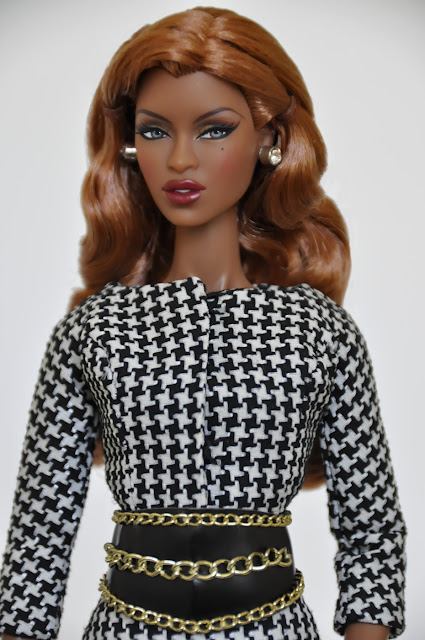 Next up is Glimmer Luchia Zadra from 2008.  Her body was from the most recent IT "Japan" skin tone replacement body release.  She is wearing Tatyana Alexandrova's Goddess ensemble from 2018. 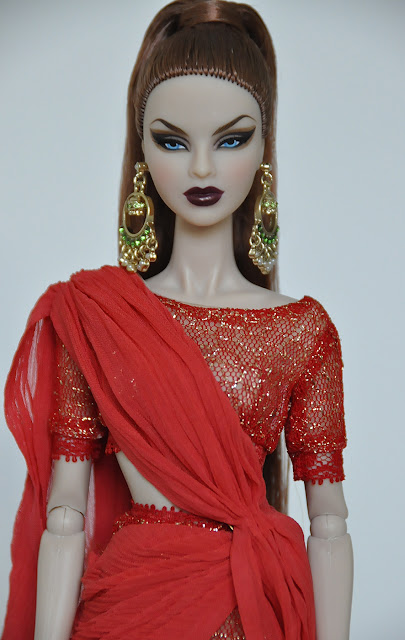 Graphic Language Adele Makeda (mold 2.0) is still considered by many as one of the best versions of this mold (even without applied eyelashes).  She is from 2004.   Her body is also one of the mass produced "Black" skin tone versions.  She is wearing her original sweater and a Randall Craig skirt. 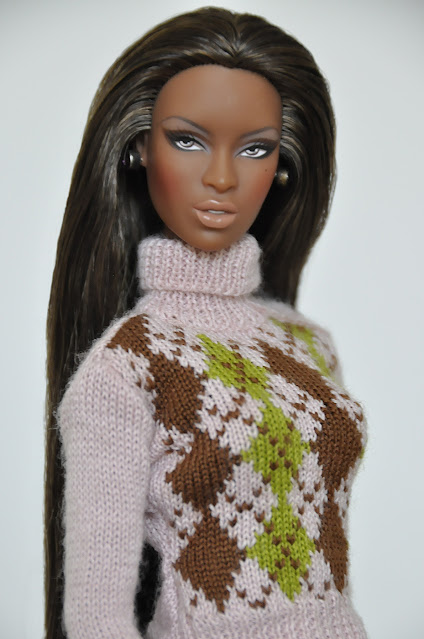 Shake It Up Korinne Dimas was from the 2012 IFDC.  Her edition size was only 300.  She benefitted from an IT replacement body from the last release of "Japan" skin  tone bodies.  Her original ensemble is another one that looks better on the FR2/FR6.0 bodies. 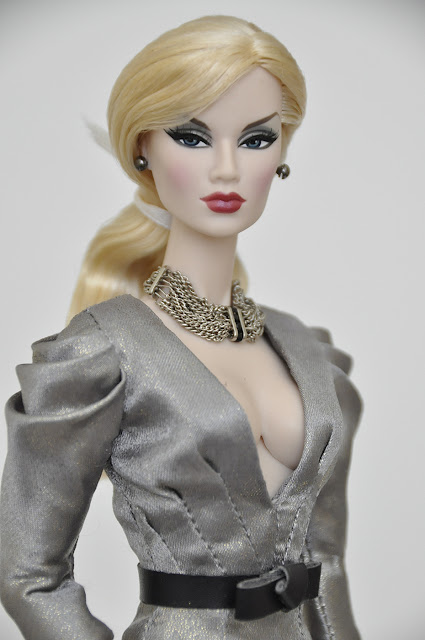 This brings me to my favorite dolls that have been put on FR2/FR6.0 bodies that were released prior to 2013.

Although she isn't a grail, Gold Glam Adele Makeda (mold 2.0) is from 2013 and was only produced in an edition size of 300.  Her replacement body was difficult to locate.  She is using Vivid Encounter Adele's body from 2014.  Her original dress looks great on the FR2/FR6.0 body! 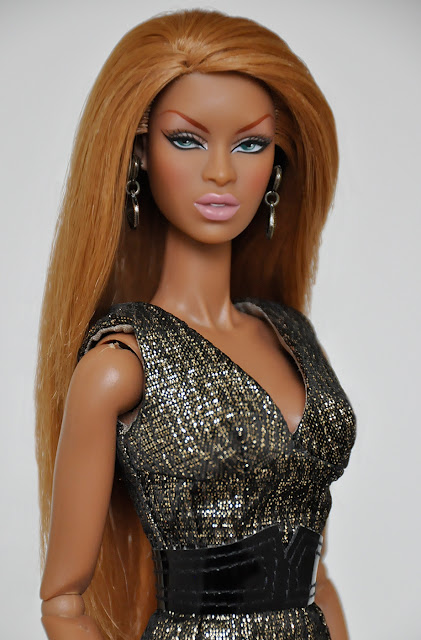 Next up is Force of Nature Agnes Von Weiss.  She was the centerpiece doll from the Welcome Dinner at the Tropicalia Convention in 2012 (edition size 200).  The closest match for her skin tone is 2014's Elusive Creature Natalia Fatale.  She could wear her original dress, but the matching tap shorts won't go over her new legs.  She is wearing Iselin's Fall 2018 Gown. 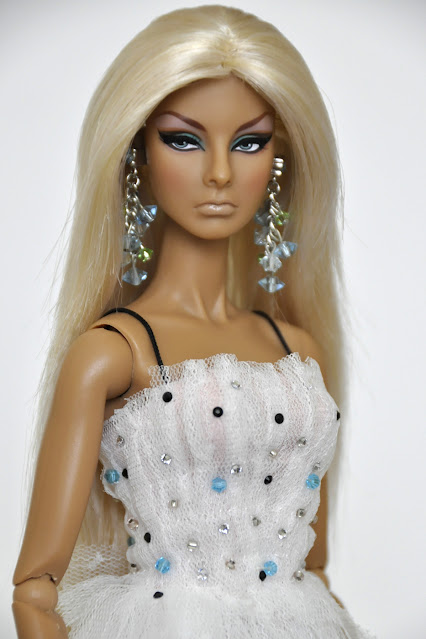 One of the most sought after version of Adele Makeda (mold 2.0) is The Muse.  She is from 2008's convention and has an edition size of 400.  She is wearing 2016 Dania Zarr's Tweed Couture ensemble.  (The sleeves on her original ensemble are too short.)   Her body is one of the IT replacement bodies in the Dark A-Tone skin tone. 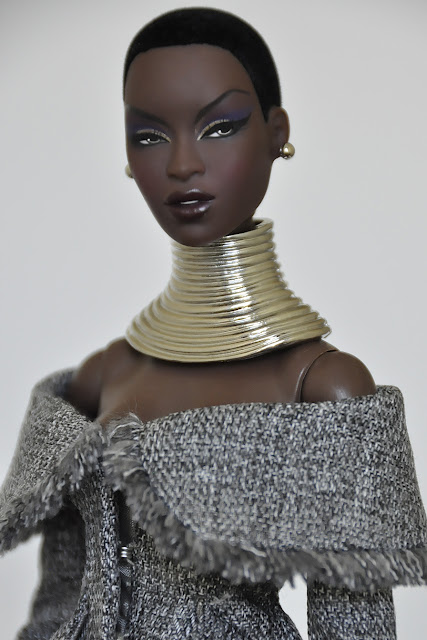 My final doll on this shelf is Second Skin Vanessa Perrin (mold 1.0).  She is 2014 and was released in an edition size of 300.  She was another difficult doll for a body replacement.  Her match is from the 2017 Faces of Adele giftset.  Her original ensemble fits the FR2/FR6.0 body quite nicely. 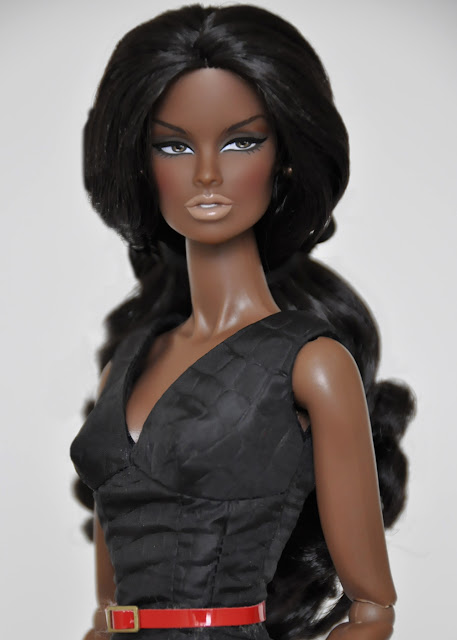 This shelf is home for:

Posted by Desperately Seeking Dolls at 11:50 AM 2 comments: