The Tale of Rumpelstiltskin ...

Once upon a time there was doll who almost didn't make it to the Integrity Toys (IT) Convention.  The doll's designer, Jessy Ayala, had created a hair design so intricate that it took production workers more than two hours to recreate it.  Similar to the real story of Rumpelstiltskin, one individual stepped up who could obviously turn straw into gold in about an hour, thus saving the day.

Most of my followers know that I usually like to open dolls with a "countdown"; starting with my least favorite and building dramatically to my most favorite.  This isn't the case for the IT Fairytale Convention.  On the first day of the convention, all of the convention collection and salesroom dolls were announced.  There was one standout from the entire collection in my eyes, 24K Erin Salston.  I immediately purchased this doll at a very good price from a convention attendee.

Here she is in her box.

Many believe that 24K Erin Salston represents Rumpelstiltskin, but I think she is the miller's daughter from the fairytale.  Here is a closeup. 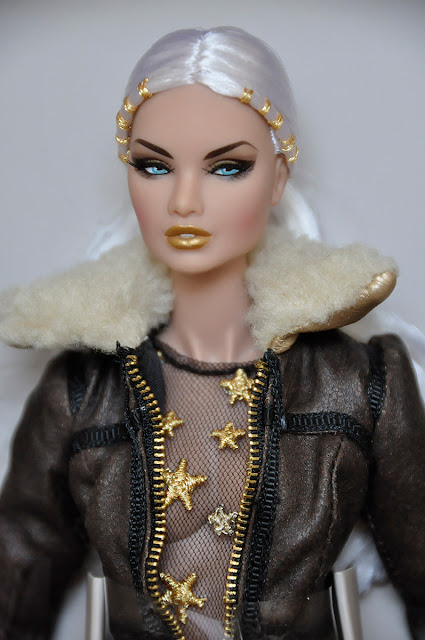 In the fairytale, a miller boasts to the king that his daughter can spin straw into gold.  This relates to the fact that the daughter has beautiful blonde hair that looks like gold when it catches the sunlight.  The king locks the daughter in a dungeon room filled with straw and threatens to cut off her head if she doesn't turn the straw into gold.  She is rescued by an imp who trades his talent for her necklace.  The next night, the king locks the daughter into an even bigger room filled with even more straw.  This time the imp trades his skill for the daughter's ring.

Here are the accessories.  It appears the designer knows the story well as the jewelry consists of a necklace and a ring. 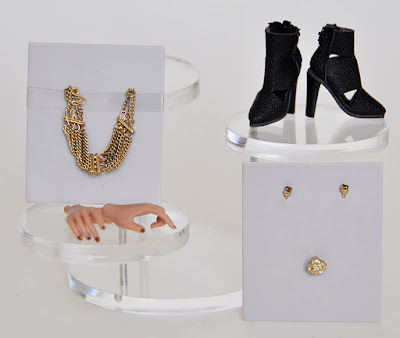 The ring is a little big on her finger, so another collector shared a trick for keeping rings on fingers.  You take a small clear rubber band (often used in packaging dolls and accessories) and slip knot it through the ring shank.  Then you take the other end and bring it around the hand tab before putting the hand back into the arm. By putting the rubber band on the palm side, it doesn't show in most photos.  Neat trick, huh? 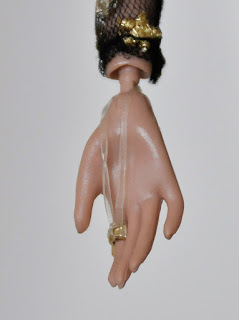 The third night, the king promises to marry the daughter if she can repeat this feat a final time.  Having no jewelry to trade with the imp, she makes a deal to give him her first born child.

Here is a photo of the dressed doll standing next to the coat. 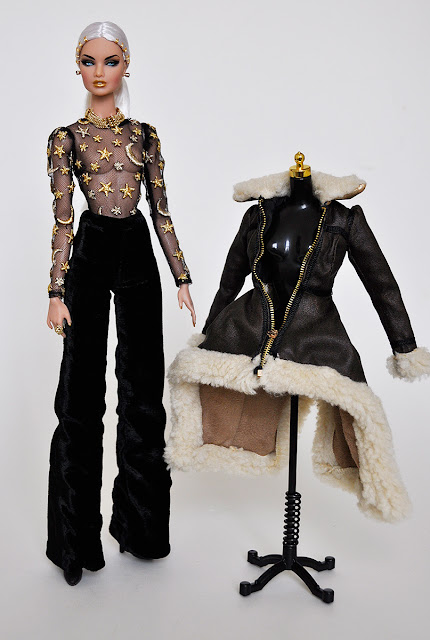 After the king marries the daughter they eventually have a child.  When the imp appears to take the child, the girl doesn't want to give her up and is so overwrought with sorrow that the imp feels sorry for her.  He gives her the chance to keep the child if the queen can say his name out loud.  She has three days and three tries each day.

There are different versions of the story here ... some versions have the queen sending someone out to try and discover the imp's name, another version has the queen sneaking out of the castle at night and finding the imp celebrating before a bonfire.  He is so joyous that he will be getting the child that he inadvertently mentions his own name.

If the designer was using the version of the fairytale where the queen sneaks out, that would explain the coat and boots, as well as the stars and moons on the bodysuit.  This ensemble would represent what the queen wears when she sneaks out of the castle at night to find the imp.  This coat is a true miniature piece of fashion art. 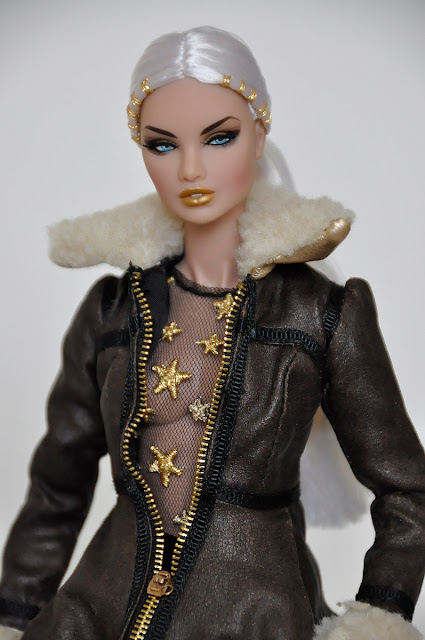 When the imp arrives the next night to claim the baby, the queen says his name "Rumpelstiltskin".  The imp gets very angry, stomps his foot so hard that it sinks into earth, and pulls himself into pieces trying to get his foot unstuck.  (In some versions, he flies out of the castle window.)

The body suit 24K Erin Salston wears is just amazing.  The pants are a velvet like texture.  This doll, from head to toe is just perfection.  The modern interpretation of Rumpelstiltskin is spot on. 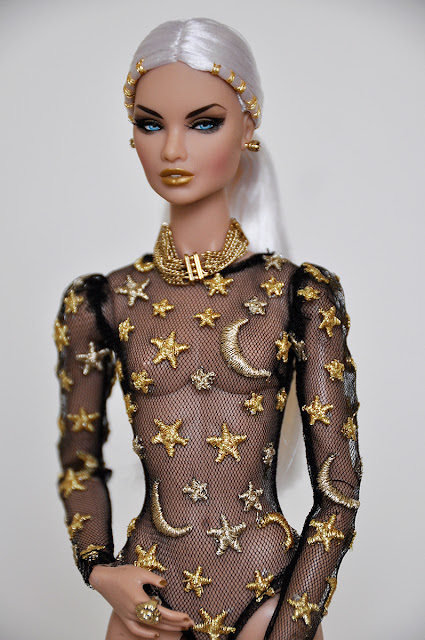 Way to go Integrity Toys!  One of the best Fairytale dolls I've ever seen in my life and a must have for an IT collector.  Her price has been rising consistently; I believe we have a true grail on our hands. 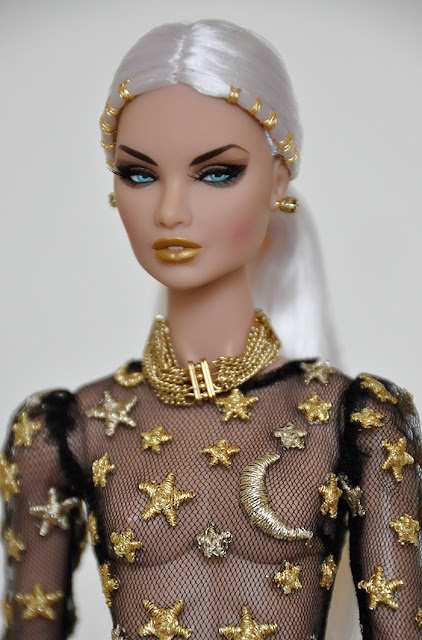 The only thing I would've liked to see would've been some sort of fur head covering.  But that would've hidden the detail of the hairstyle, so I understand the choice to not include one. 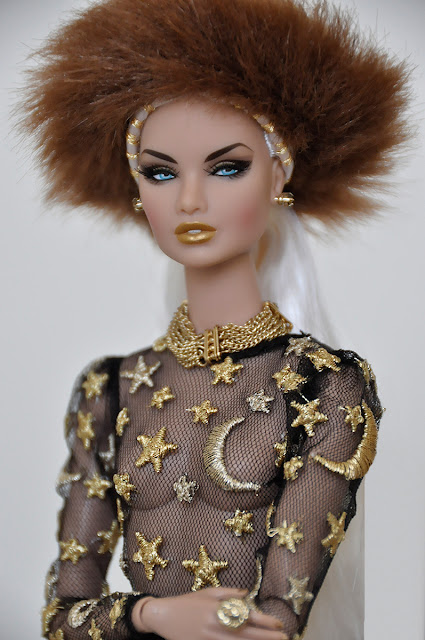 Whether Rumpelstiltskin or the miller's daughter, 24K Erin Salston was definitely the golden doll of the entire collection in my opinion.

I have gotten very behind with deboxing dolls this year.  Apparently, my rules have all been thrown out the window.  I've been blaming too many things:  my accident in December, my damaged knee, the cancer diagnosis of my little dog and the subsequent loss.  It's time to get back on track.

The very first doll(s) to arrive this year were the Sister Moguls giftset.  This giftset was a W Club Exclusive from 2016.  All W Club members were able to purchase this set, and it was produced based on the preorder - edition size 1250.  Cost $200.

This is a full length photo in the box. 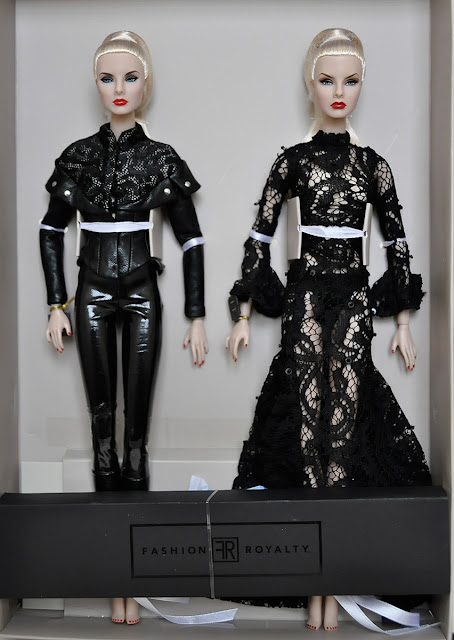 The dolls are actually quite similar.  They were originally supposed to have two different skin tones, but a decision was made during production to give them the same Japan skin tone.

Here is a closeup of Agnes Von Weiss. 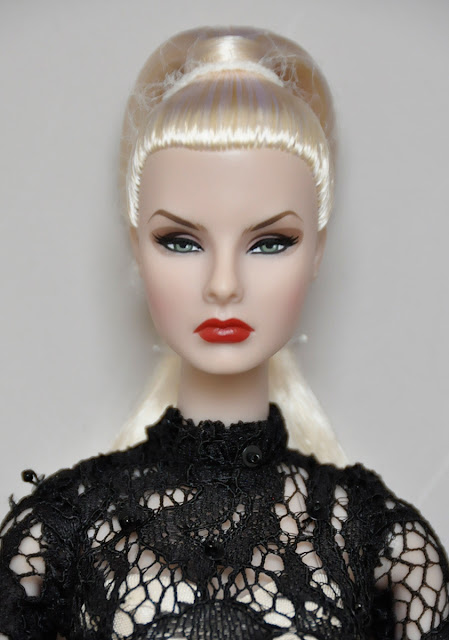 I love her screening.  Her eyes are gorgeous.

And here is Giselle Diefendorf. 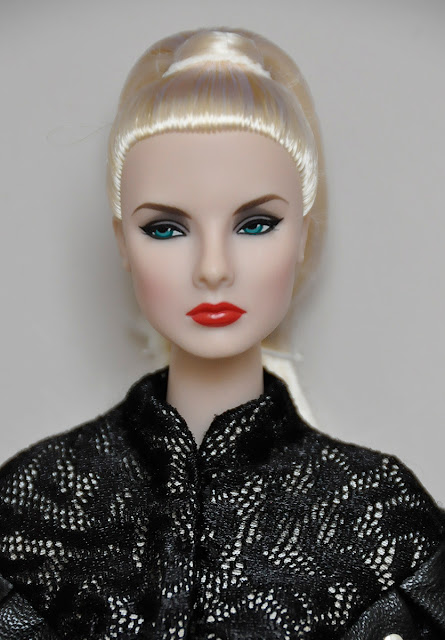 (Sorry about the fuzzy photo on the right.)  There are two pair of earrings, four rings, two magnetic pins, a veil, an extra set of hands for each doll, a set of photos and pencil for autographing them, and a pair of shoes for each doll.

Here is a photo of the dolls out of box. 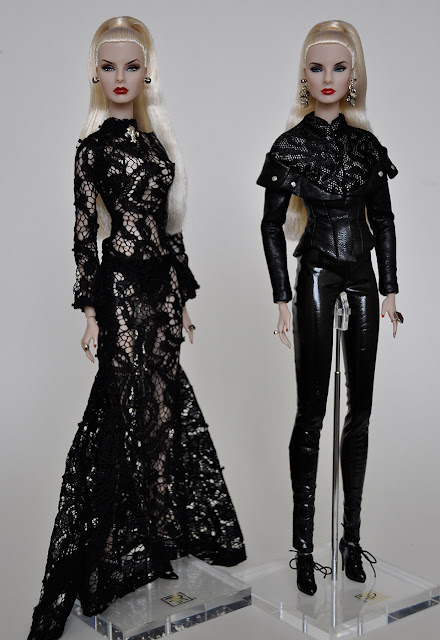 My only concerns (and they are minor) are that the dress is a little short in the front and the sleeves aren't long enough.  When sewing stretchable lace, the seamstress needs to allow for the fabric drawing up.  I really like the black "leather" pants and Giselle's top.

Another closeup of Agnes.  She is truly drool-worthy. 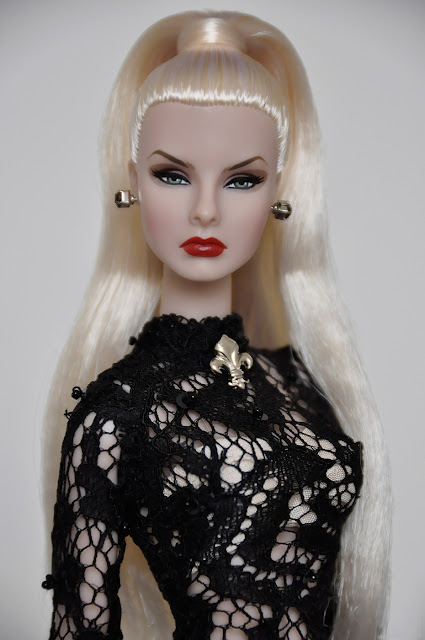 And her sister, Giselle. 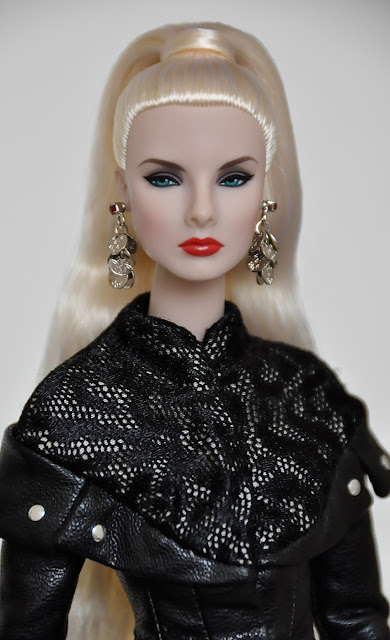 I wanted to see how Giselle would look redressed.  I have her wearing In Rouge from the 2015 Integrity Convention. 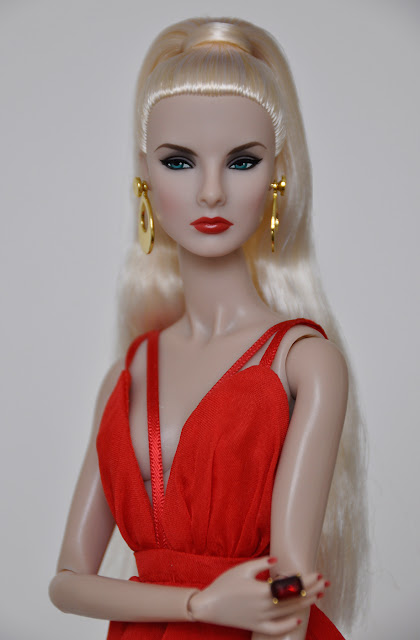 I couldn't stop photographing this girl. 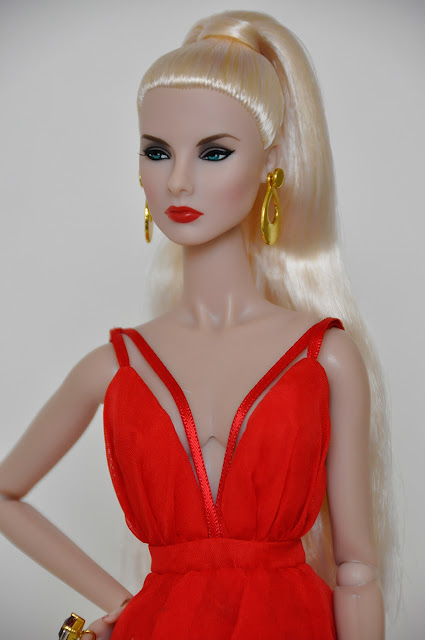 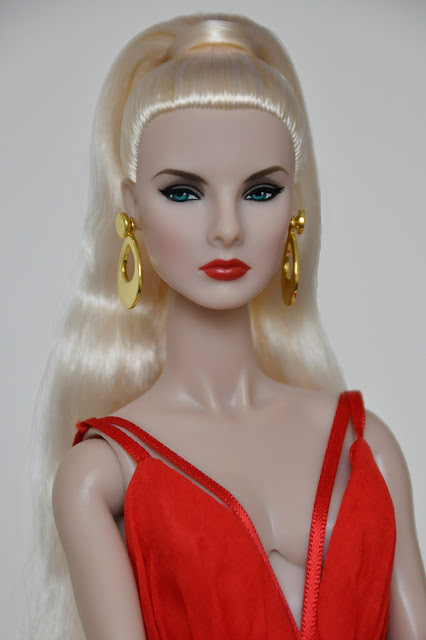 I hate that it took 11 months to open this giftset.  I could've been redressing these girls all year!