Integrity Toys is putting a lot of dolls in collectors' hands.  Last year alone, there was almost 50,000 dolls produced in 85 versions of Poppy Parker, East 59th Street/Victoire Roux, The Industry, NuFace, and FR2.  This has been going on for the last few years.   Edition sizes of W Club Exclusives are commonly over 1400 now.  Convention edition sizes are up to 600.

The Integrity Toys Collecting Community appears to be completely saturated.  This has caused the prices of older dolls to drop substantially.   This is good news for collectors but not-so-good news for sellers.

This spring I was able to add FIVE older dolls to my collection.  The first is a doll that has been a holy grail of mine for over 10 years.  That's right ... OVER 10 YEARS!

The Misaki (Nippon) line of Integrity Toys used to be solely for the Japanese market.  They were not easy to get in America.  I actually started collecting Misaki the year they were first released in 2006.  I have eight Misaki from that year, including one of the primary characters in my collection, Harajuku Honey.   The most elusive Misaki is the very first one released Tokyo Here We Go Marui ONE Shinjuku.  This doll's edition size was only 100.  Unfortunately, this doll rarely comes available publicly and used to sell for over $1000 easily.  You cannot imagine my surprise and excitement to get this doll (displayed and loose). 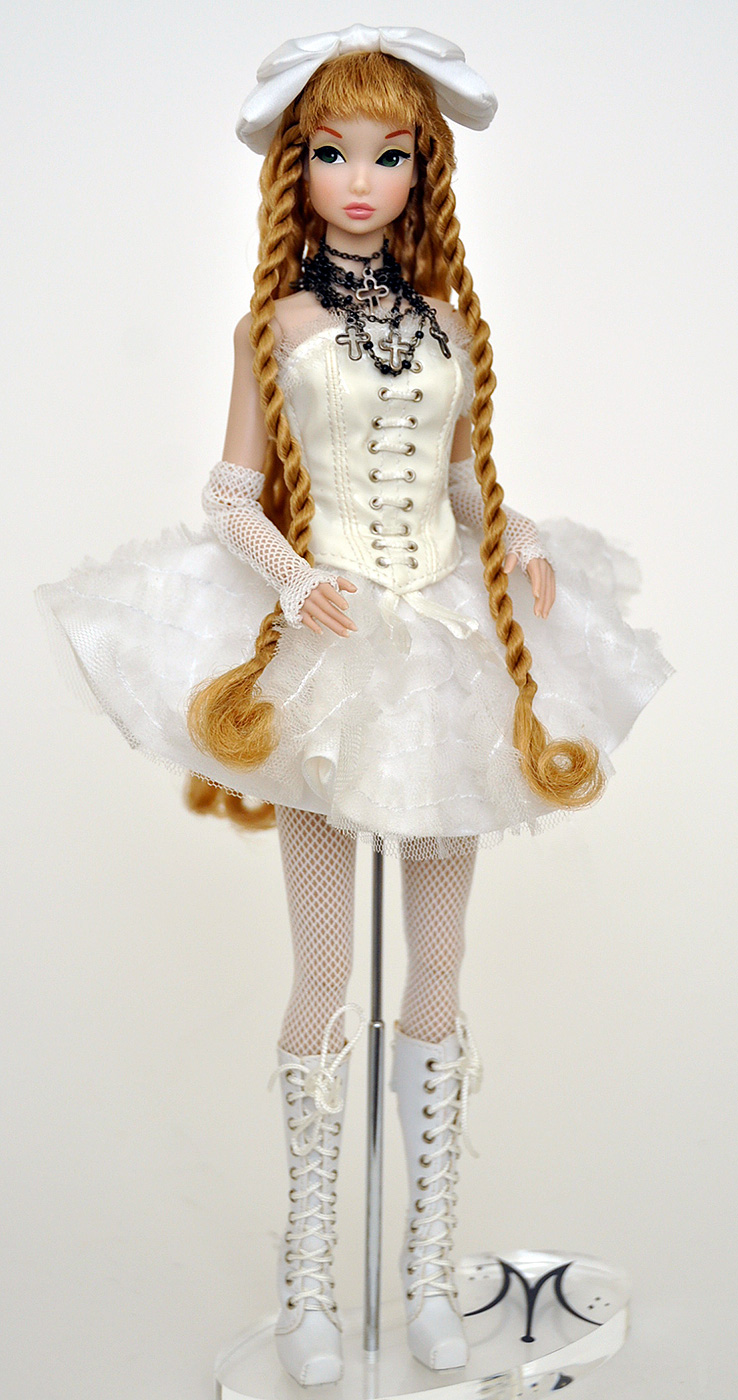 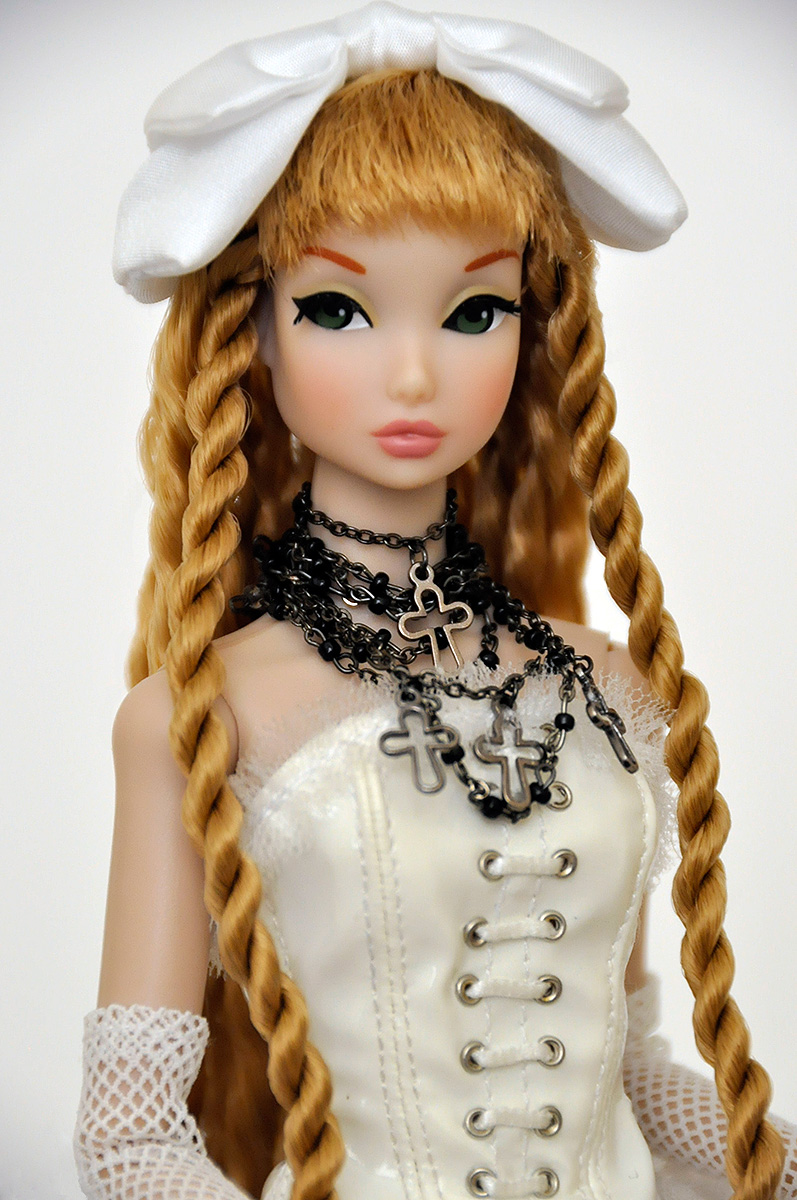 She is considered by many collectors as the most beautiful Misaki ever produced.  I had to replace her body because it had yellowed and the boots are beginning to split, but she is proudly displayed in my case as my #10 of 2019.

A couple years ago, I decided to start selling some of my Monogram dolls.  One that I have had buyer's remorse for selling was Magnetism, a Dolls In Oz Exclusive from Australia, in an edition size of only 300.  I couldn't believe my luck in acquiring this doll at almost 50% of her original retail price NRFB. 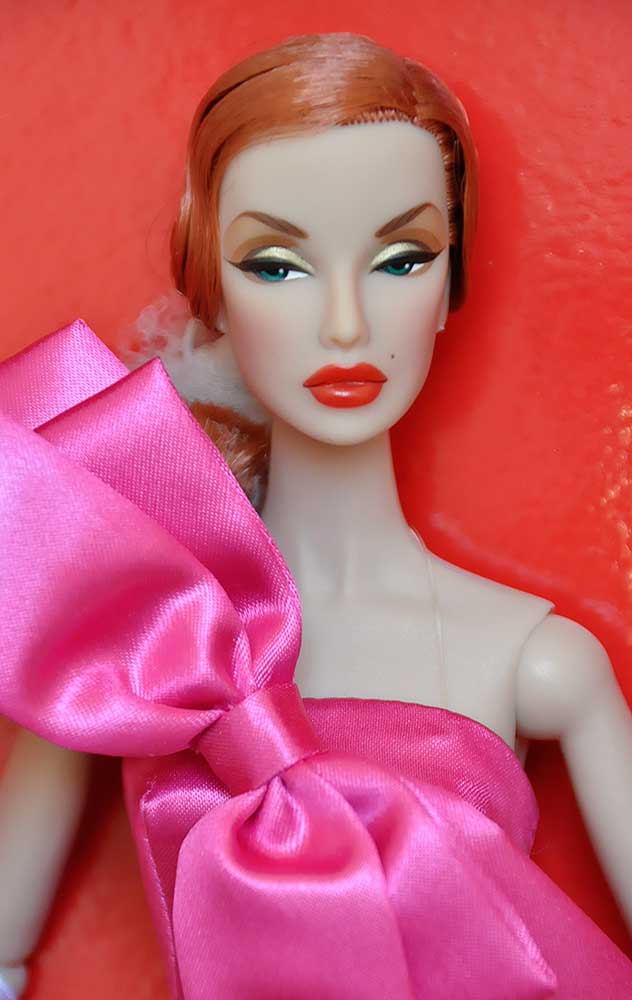 Gotta love those gold eyelids!  This doll's dress is phenomenal, her hair is gorgeous, and that face speaks for itself.  The Monogram body is one of my very favorite IT bodies.  #11 of 2019 is Magnetism Monogram.

Another doll that I sold from my collection was the first W Club doll, Stylish Escape Veronique from 2006.  I love this giftset! 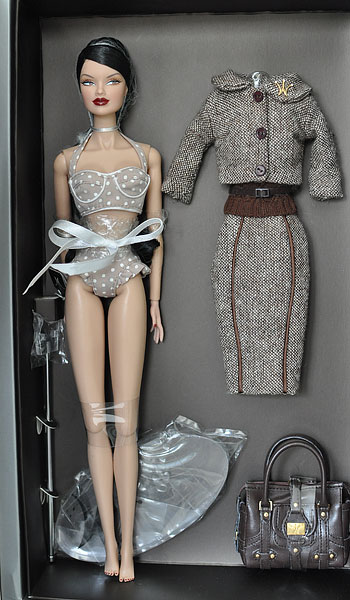 I was able to purchase her at actual original cost (about half what I sold her for a few years ago)!  She needed a new body, but I have several here.  I couldn't resist! 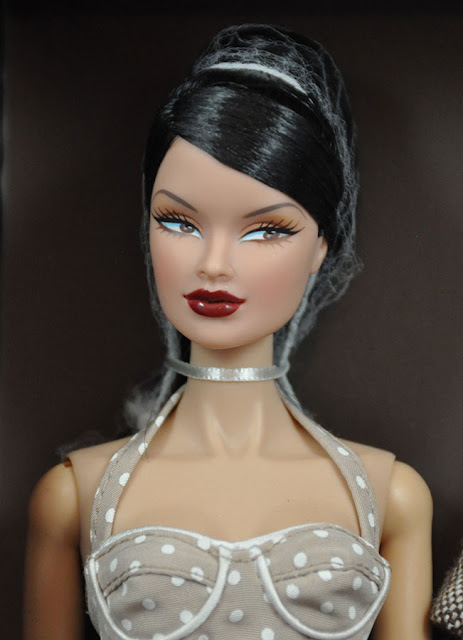 She is quite a beautiful doll and redresses so well on a FR2 body. 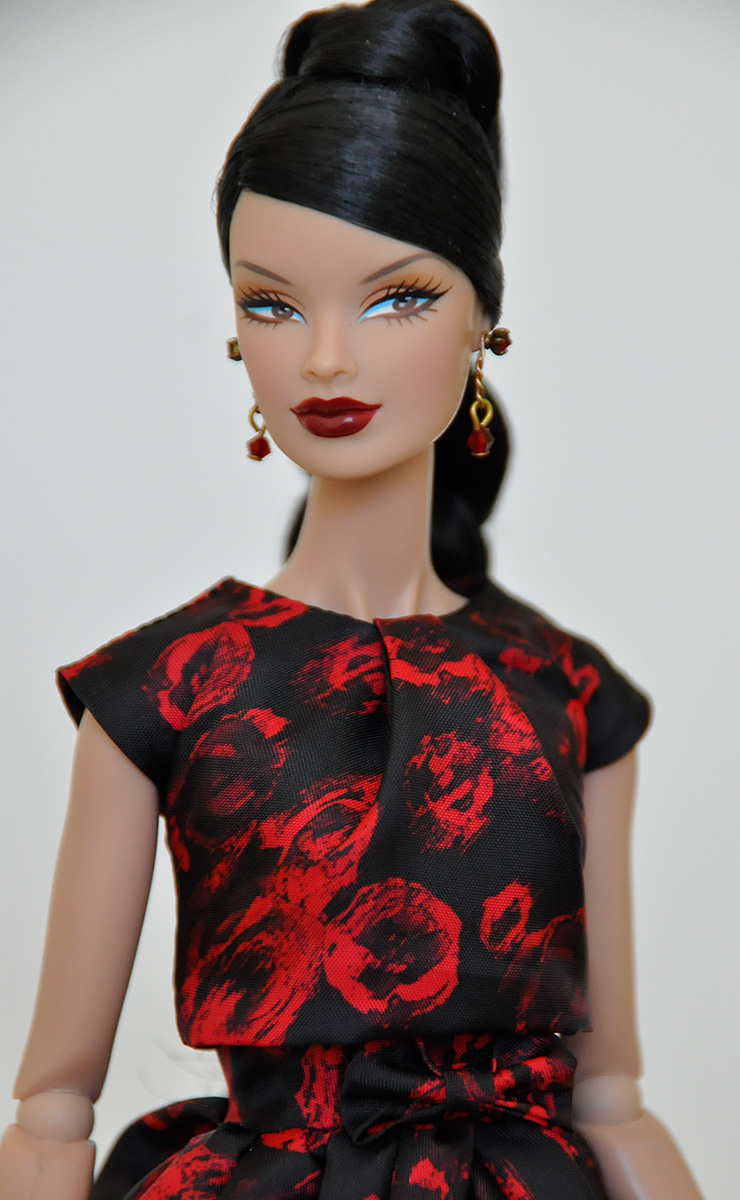 A doll that I've considered adding to my collection since the 2016 Convention is Kiss You In Paris Mme Jolie.  I grabbed her up quickly when someone was selling her below original cost. 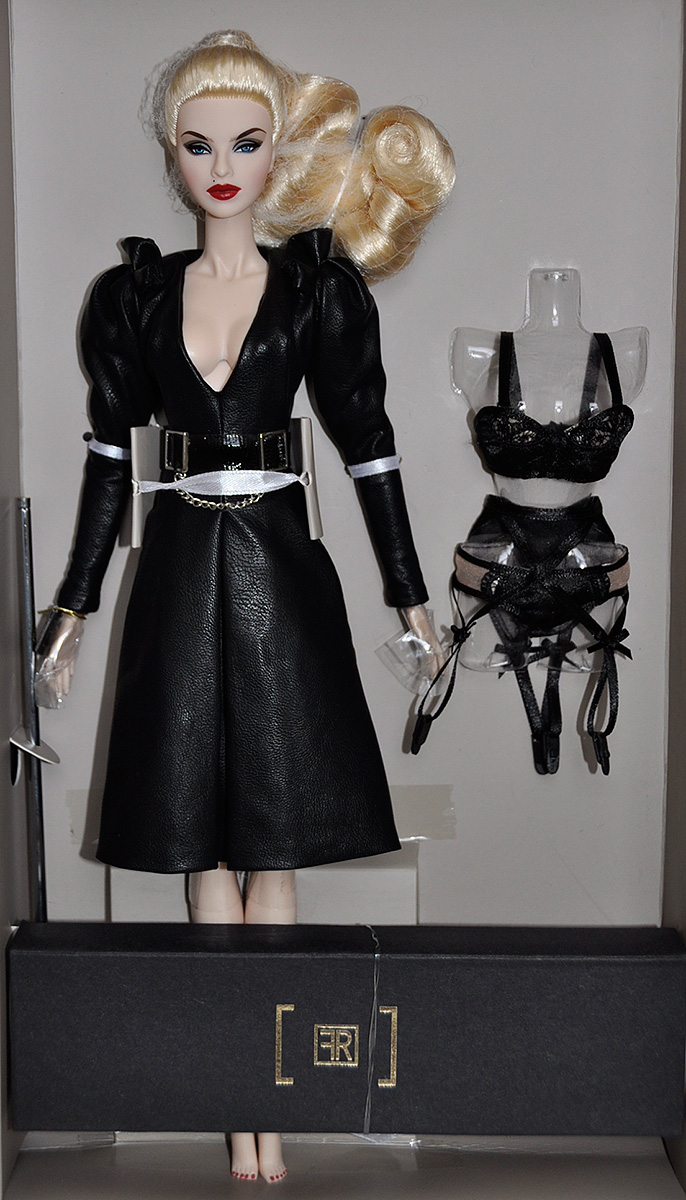 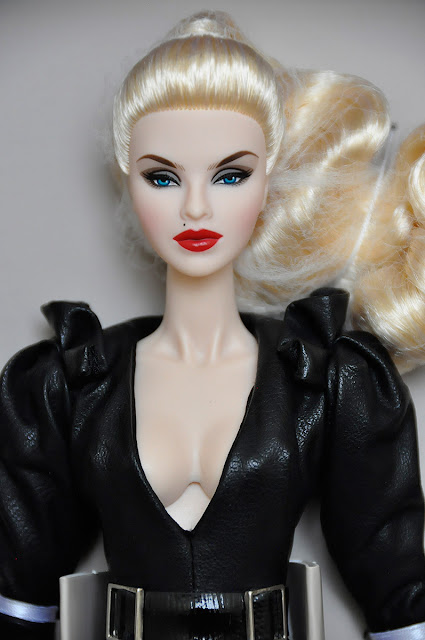 What a gorgeous doll and a wonderful homage to Madonna!  #13 of 2019 is Kiss You In Paris Mme Jolie.

The final addition to join my collection is the very first W Club Exclusive NuFace, Grand Arrival Colette Duranger.  I picked her up nude.  She, too, will require a new body. 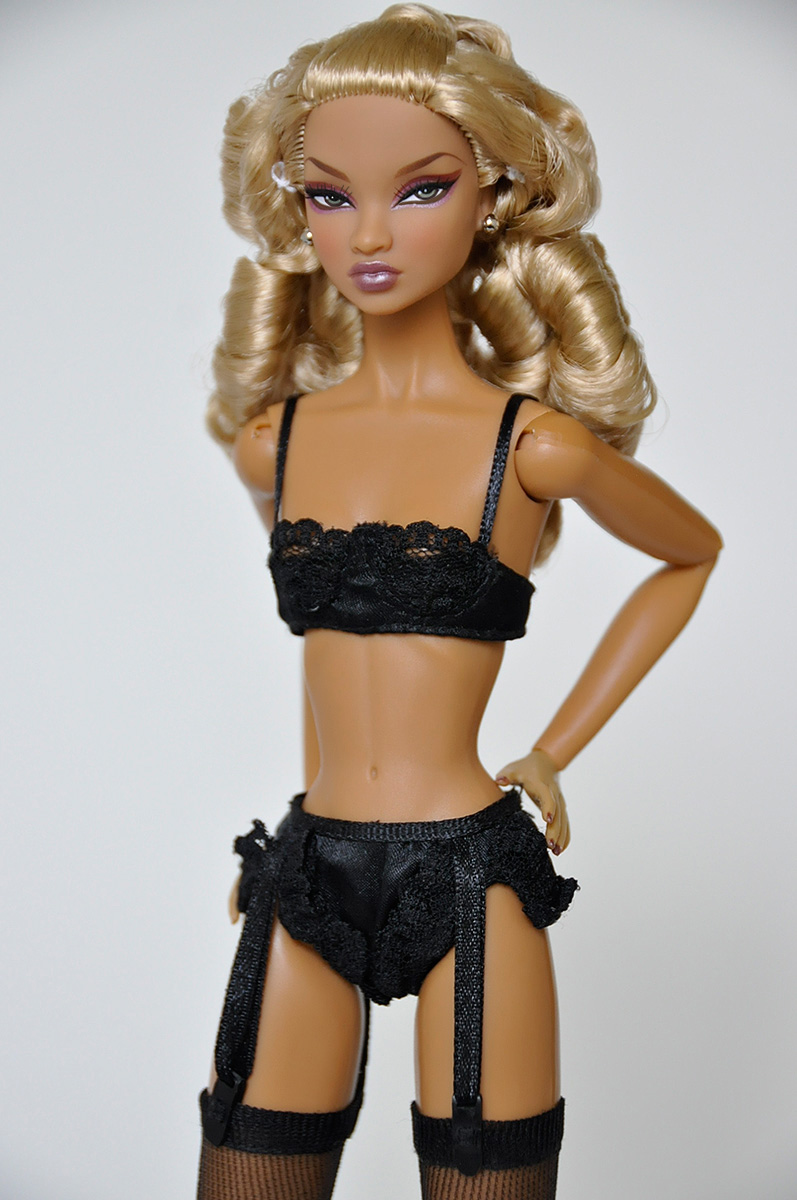 Her hair is perfect and was still in its hairnet.  I couldn't believe my luck in finding her on e-bay for a fraction of the cost that she usually sells for.  Again, I think it is because the body was changing color.  #14 is Grand Arrival Colette Duranger.

I am beginning to realize that I am definitely going the wrong direction in my collection.  I haven't sold a single doll this year, but have added almost 30.  Fortunately, school is out for the summer, so I have some time to filter my collection.   I don't regret any of these purchases in the least.  I am actually thrilled to have added them.
Posted by Desperately Seeking Dolls at 11:57 PM 2 comments:

I wasn't sure about this doll.  I have owned both previous versions of the Annik Vandale mold and neither were able to find permanent spots in my collection.

The Awakening is the last to arrive from the 2018 Counter Culture Collection.  Apparently, there were a lot of production problems relative to this version.  A little card was included with the COA that explained some of the issues and how IT handled them.

The stone on her face is actually imbedded into the plastic.  There is a warning that you shouldn't try to remove it.

The braids were created pre-production.  The only problem with this is that some of the braids are VERY MESSY.   One of the braids in my doll's hair was so pulled apart that I attempted to unbraid it and fix it.  NOTE:  This doll's head is not rooted using the knot method.  While I was trying to fix the braid the strand of hair actually pulled out of the scalp - it was one long strand rooted in the middle to create two hair braids.  I couldn't figure out where it popped out, so I just put it in a baggie.  I also abandoned the idea of fixing braids, so be very careful with the doll's hair!

In order to root the doll's hair properly, IT had to use a more "rubbery" head.  The original plastic kept splitting during production when they tried to root these braids.  The flexible rubber was more pliable and easier to root.  (It's probably also the reason it wasn't difficult to pull a "double strand" out.)   The fact that the head is rubbery doesn't actually affect how I feel about the doll. 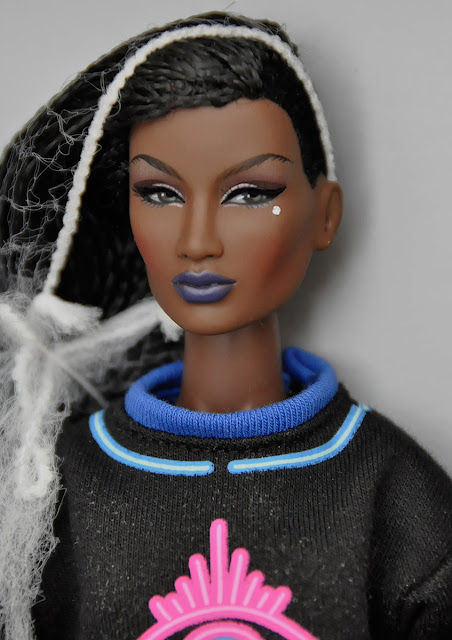 I have not been a fan of the gray sclera used on this line of dolls,  BUT ... the method of application on this doll is phenomenal.  The gray is paler, so it doesn't look so muddy.  In addition, there is a small line of white that makes the eye look "glossy" and somehow rounded.  The effect is great.  I wish IT had used this production method on all the dolls from the Counter Culture line.  It's very unfortunate that it took the last doll released in the collection to get the process down perfectly.  Now IT has abandoned the idea due to the comments we all made about the earlier dolls.  I really like the screening and my only complaint would the color of the lips. 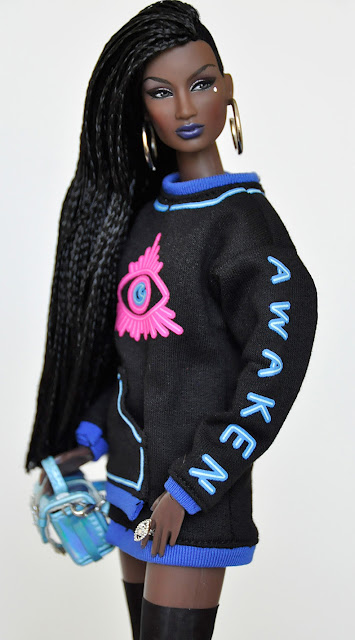 Somehow I feel Annik got shafted in the accessory department. Dominique, Violaine, and Colette all came with extraordinary coats and multiple bracelets.  Poor Annik had just her earrings, a ring, a purse, and a cap. 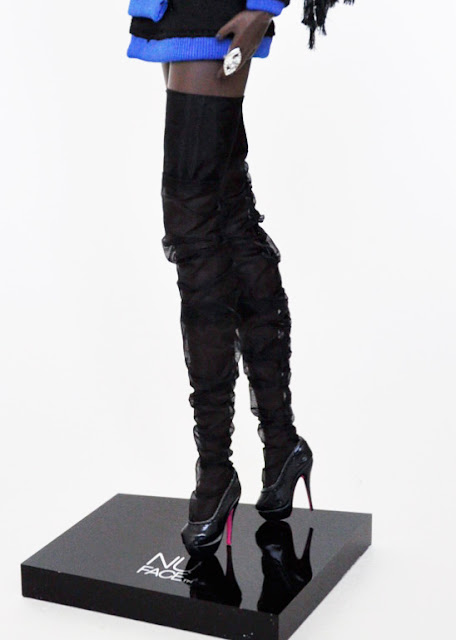 The boots are very interesting.  The foot part is like a shoe, but the top is ruched.  The soles are bright fuchsia! 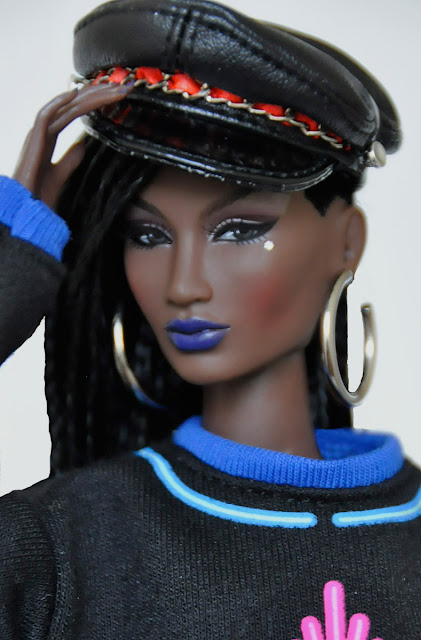 I do like the cap with it's metal braided jewelry.  It is quite well made and fits well (even though you need the two pins to hold it down over that voluminous hair).  I am also impressed by how the sweatshirt/dress has the word "Awaken" on the sleeve.  There are many intricate details to this doll that show a considerable amount of attention to tiny details.

Very few of my dolls hang around in their original ensembles very long.  A large part of my joy in doll collecting is redressing my dolls.  The search was on for something appropriate for this girl to wear.  I was surprised that she could wear the Misaki Anti-Social ensemble from 2006! 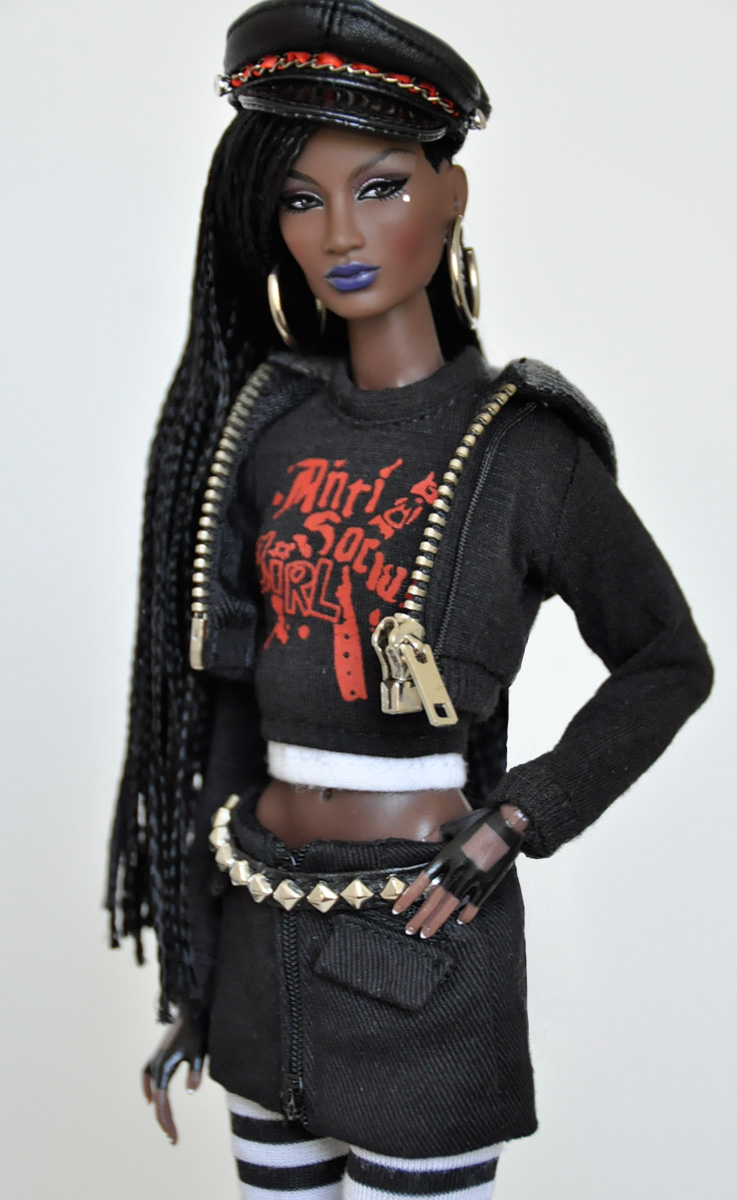 The Awakening may be only representative of the Annik Vandale mold in my collection, but I think she will fit in nicely!  Now how about a softer look?  Maybe the shorts and top from Metamorphosis Erin? 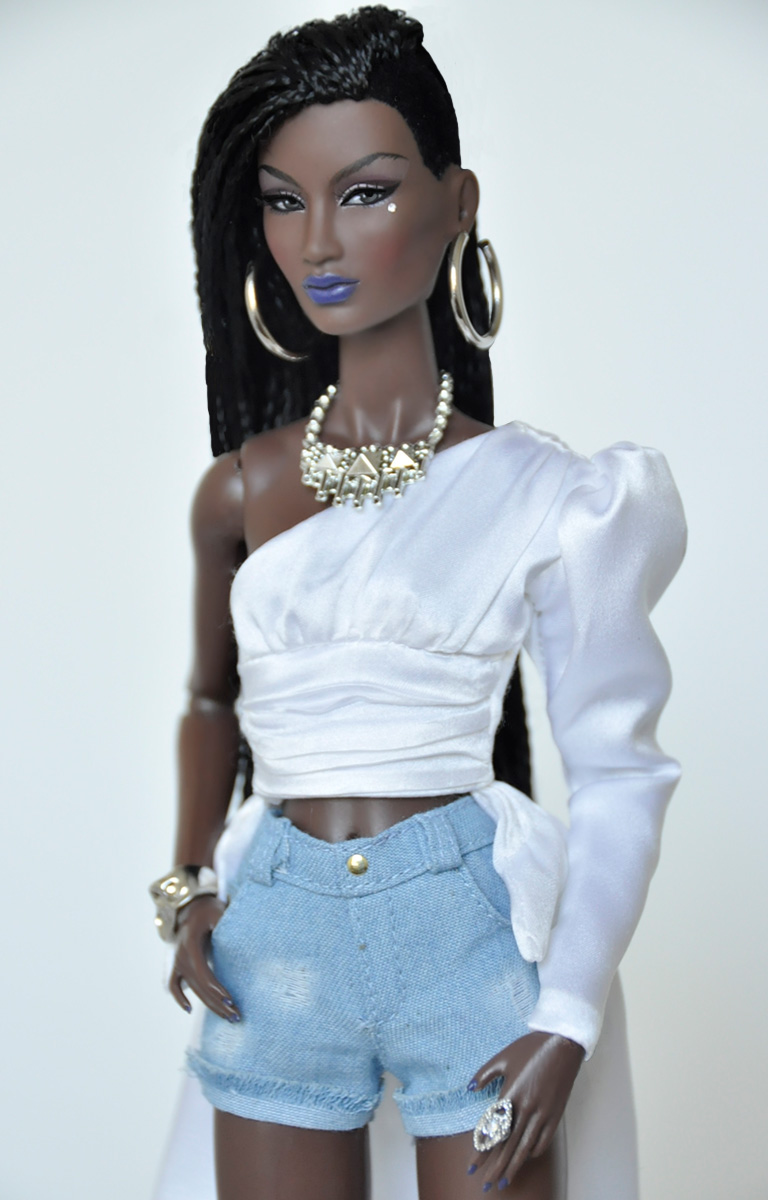 One thing you can count on with Integrity Toys (IT) is that they are always experimenting and changing things up.  Sometimes the changes are embraced by collectors, but sometimes their dedicated followers lose their friggin' minds.

Last year, a most talented designer that works for IT, Jessy Ayala, decided to use some creative license and tried making the dolls' sclera more realistic.  In humans, the eye sclera is not bright white.  It runs the spectrum from pale white to grayish.   IT started producing dolls with a gray wash over the doll's eyes with a shinier sealer.   Unfortunately, the results from the factory were not consistent.

In an attempt to make dolls look "more alive", some of them looked like "the walking dead".   See my last post about Beyond This Planet Violaine Perrin. 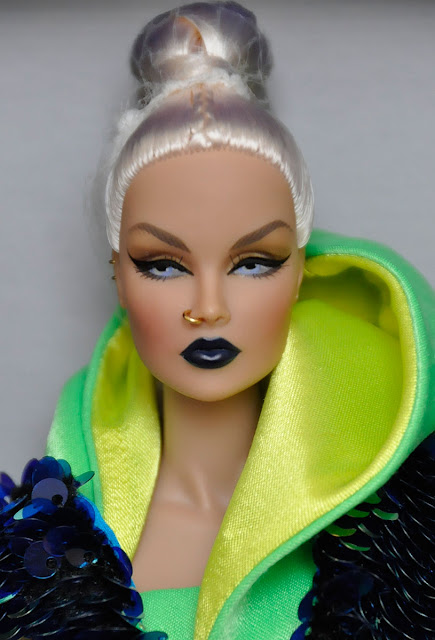 It was strange how the results of doing this were different from doll to doll.  In some dolls, it didn't make a great deal of difference.  An example of the process being successful would be Goddess Tatyana Alexandrova. 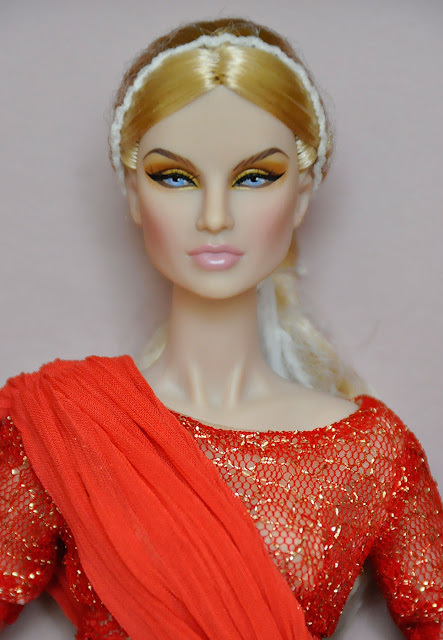 I knew I couldn't afford sending off all the dolls I had purchased last year to have this problem corrected.  Since I have deemed 2019 as my "Year of Refinement" and was armed with one successful sclera correction, I decided to try my hand at some dolls.

Another case where the execution wasn't so great was one of my very favorite molds, Rayna Ahmadi.  I had been looking forward to Eye Candy Rayna, a W Club Upgrade Offering, ever since she was first announced.  Unfortunately, I was quite disappointed with the result of the screening with the gray sclera.

Here is a side-by-side photo showing the original screening and my correction. 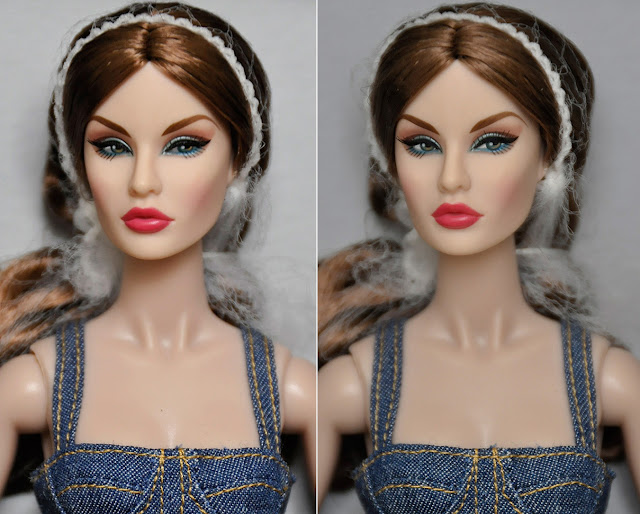 I was very pleased with the results, so (after almost one year trapped in her box) I decided to release her to my herd.

Here is what she looked like NRFB (with eye sclera correction).

Unfortunately, she suffers from another problem facing IT collectors over the past couple years.   It's obvious that her head is not the same skin tone as her body.  She was advertised as Japan skin tone (which is the color of the body), but her head is much more cream.   Fortunately I had a spare NuFace Cream colored body that I ordered in the last round of offerings.

With her new body, out of the box with her accessories on, she can actually stand on her own.  (I had to press the pant legs.) 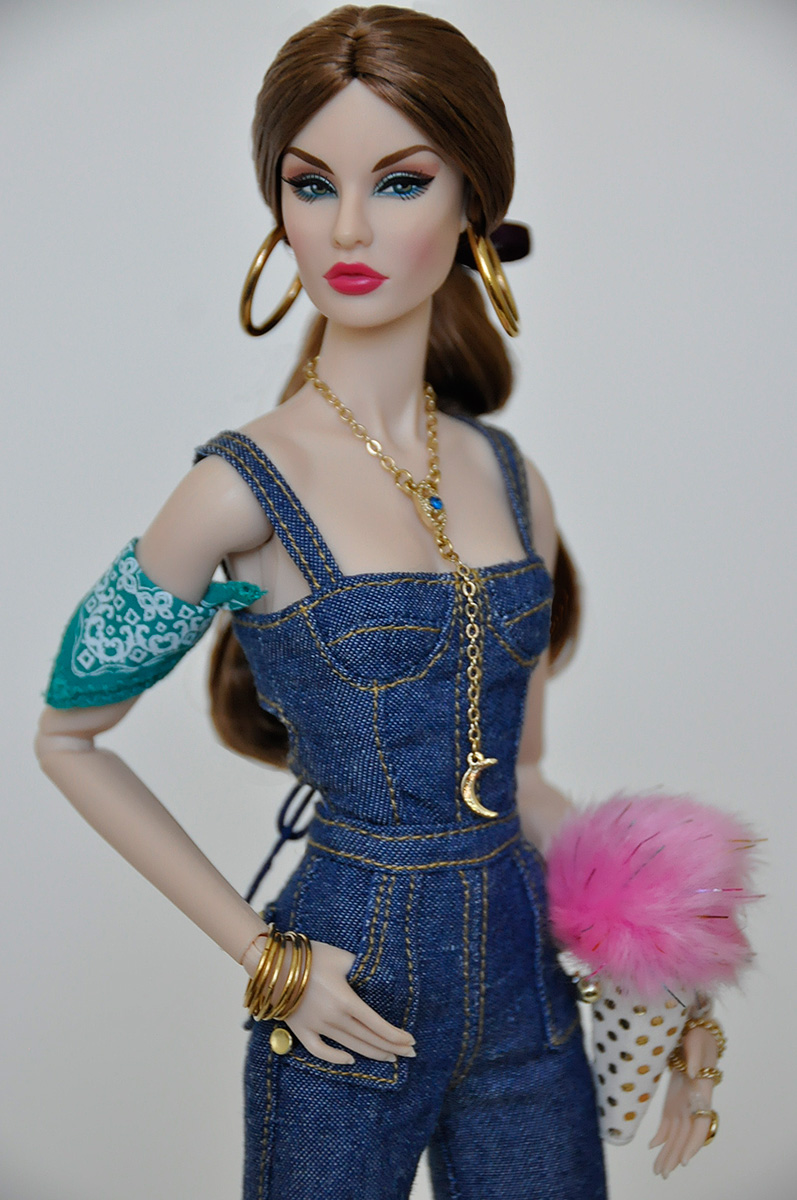 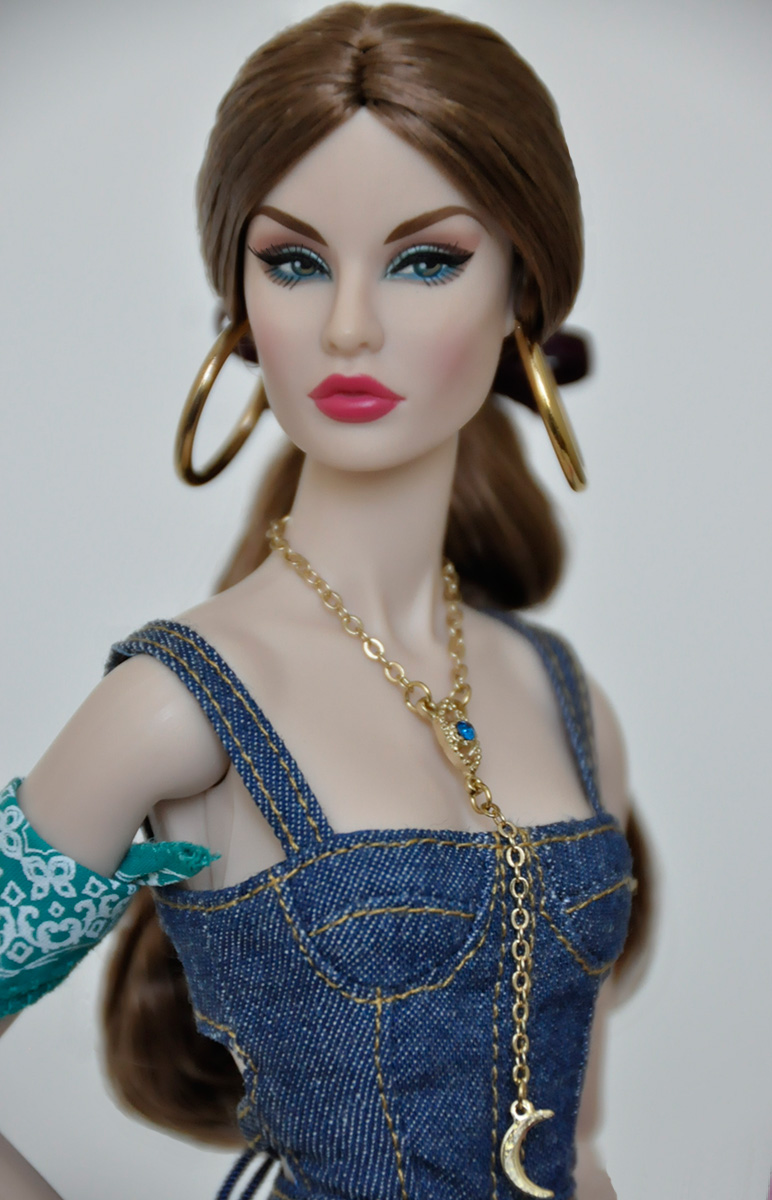 (Does anyone else see a slight resemblance to Jennifer Garner?) ...

Posted by Desperately Seeking Dolls at 11:32 AM No comments: