My birthday was May 23.   There was a doll show in Atlanta on May 21.   I had originally tried to make plans with one of my best dolly friends from out-of-state to attend this show together.  HOWEVER, my oldest and dearest friend and my husband had made other plans for me on that weekend.

I was told that I was going to spend Friday night with my bestfriend in Atlanta.   I left after work and got there just in time to be whisked off to a special birthday dinner at a wonderful restaurant in Buckhead.  I was told to get a good night's rest because we were starting early in the morning.

The next morning, I got up early and called my husband (who had to work that day).   He informed me that my bestfriend was taking me to the doll show and that I was allowed an undisclosed amount of money to spend.  "Choose wisely," I was told.

I got so excited.  We arrived just as the doors opened.  I always have a plan at a doll show.  I go through quickly and then go back to the booths where there are items that I am interested in purchasing.  The first time through and no FR dolls to be found.  Oh well ... let's make the best of it!

I stopped at the booth where a lady had a TON of plastic baggies filled with vintage Barbie clothing.  She said she was thinning out her collection - now that prices had come down, she was focusing her collection on quality outfits and was selling everything that wasn't "pristine".

My dolls and I don't need no stinkin' pristine.  If it fits, looks good, and is great condition, then we're fine with it.  Her prices were outstanding.  I spent less than $120 at her booth and got the following outfits.


The first outfit is modeled by Chaundra.  (Naturally, Chaundra got first pick.)   The outfit is from 1967 and is called Borderline.  It is a yellow linen jacket and pleated skirt.  It is finished with blue piping.  It did not come with any accessories or shoes.  But I have yellow shoes and used the yellow hose from a reproduction TNT Barbie. 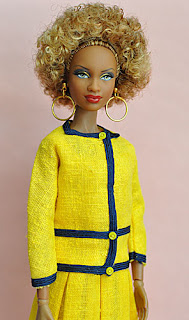 Fortunately, the seller had several Francie outfits that fit the smaller bust girls.   Here is Anjila (#14 BB) wearing a 1968-69 outfit called Hill Riders.  It came with the coolest rubber shoes.

I got really excited about the different sweater outfits.  Here is Summer Poppy in 1965's Vacation Time.  The pink rubber shoes fit perfectly and the outfit is divine!

For some reason, I found a lot of yellow outfits.  Here is Feelin' Fierce Jett wearing Country Capers from 1969.

And then Love Me Poppy in Caribbean Cruise (I think I already mentioned that these vintage rubber shoes fit those big Poppy feet beautifully!)

The final outfit being modeled by a smaller girl is "Winter Wow" from 1969-70.  When I got it out of the baggie, it just screamed for Boogie Beach Aria.  It is so "hip" ... fur trimmed jacket, gold hip boots, fur muff, and fur hat (which wouldn't go on that fro!). 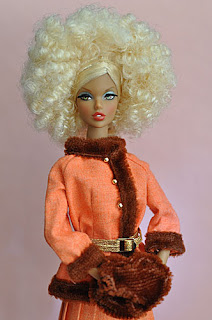 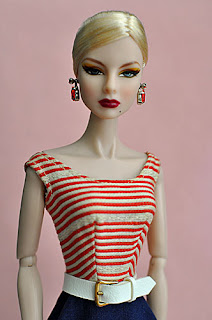 Firefly grabbed Ruffles and Swirls from 1971. 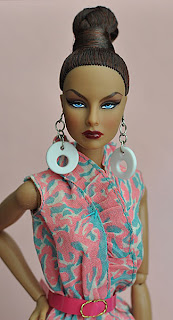 My newest addition to my collection, AFL Vanessa ran off with Theatre Date from 1963. 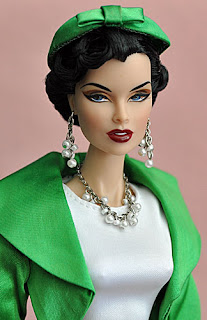 Which brings me to a pair of matching outfits.   Diamond Dusted Vero chose "Swingin' Easy" from 1963. 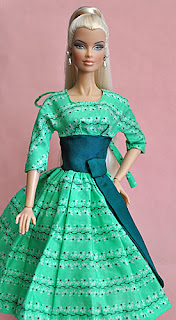 While RE Agnes dared anyone to get between her and Let's Dance from 1960-62. 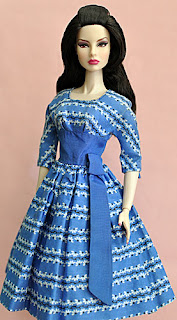 She truly looked stunning in this outfit. 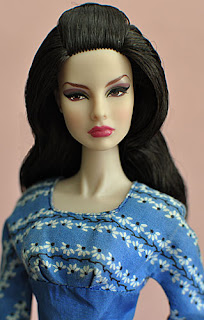 This photoshoot was done in front of a "set-up" from the 2008 Barbie Convention that I found at another booth.  The lady sold me the entire set of props (backdrop with holders, miniature camera and tripod, and working spotlight) for $50.   I hadn't seen this before and fell in love with it.  My friend told me I would regret it if I didn't purchase it.  She was right. 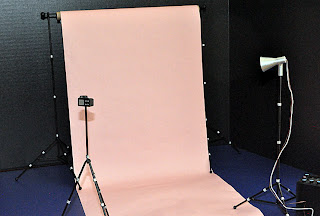 I had spent $170 and was told that I hadn't reached my birthday limit yet (what a great husband!).  I went through one more time and dared one last purchase.   It will be featured in a future blog!

Well ... it was a wonderful show.  I didn't buy a single doll ... so I'm not stressing about deboxing or selling.  At current count, 19 dolls have left my collection this year.   I have added 8.  I am still trying to sell Comeback Noir Vero; my next post will be an update on the replaced head of Flawless Elise.