I've had a couple friends who follow my blog and noticed all of the recent sales related to Vintage Vogue Ginny dolls.  I decided to share an earlier doll collecting passion of mine that started long before there were Fashion Royalty or Tonner dolls.

Like so many collectors, my roots go back to vintage Barbie.  She was the doll of my childhood.

Shortly after my first marriage, I found another little charmer that stole my heart.  As many of my followers know, I teach elementary school.  It was only a matter of time before I found those little girl dolls that looked like the children who showed up daily in my classroom.

There is a truly interesting and fascinating story behind these dolls.  Like Ruth Handler was the founder of Mattel, Mrs. Jennie Graves created the "Vogue Ginny" doll.  She grew up sewing for her own dolls and turned her hobby into a career.   She started a "cottage industry" in Massachusetts in 1922.  She hired ladies to sew the clothing and assemble the production of the dolls in their homes,  returning the finished dolls for packaging and shipping to retailers across the U.S.   The first "Ginny" dolls (named after her own daughter, Virginia) had painted eyes and strung bodies.  They evolved into having sleep eyes and eventually into dolls that actually could walk as they are pushed along a flat surface.

The dolls I collected are from the 1951-1954 time period.  I preferred the strung dolls with painted face-ups and sleep eyes.  Here is a small diorama photo from my collection. 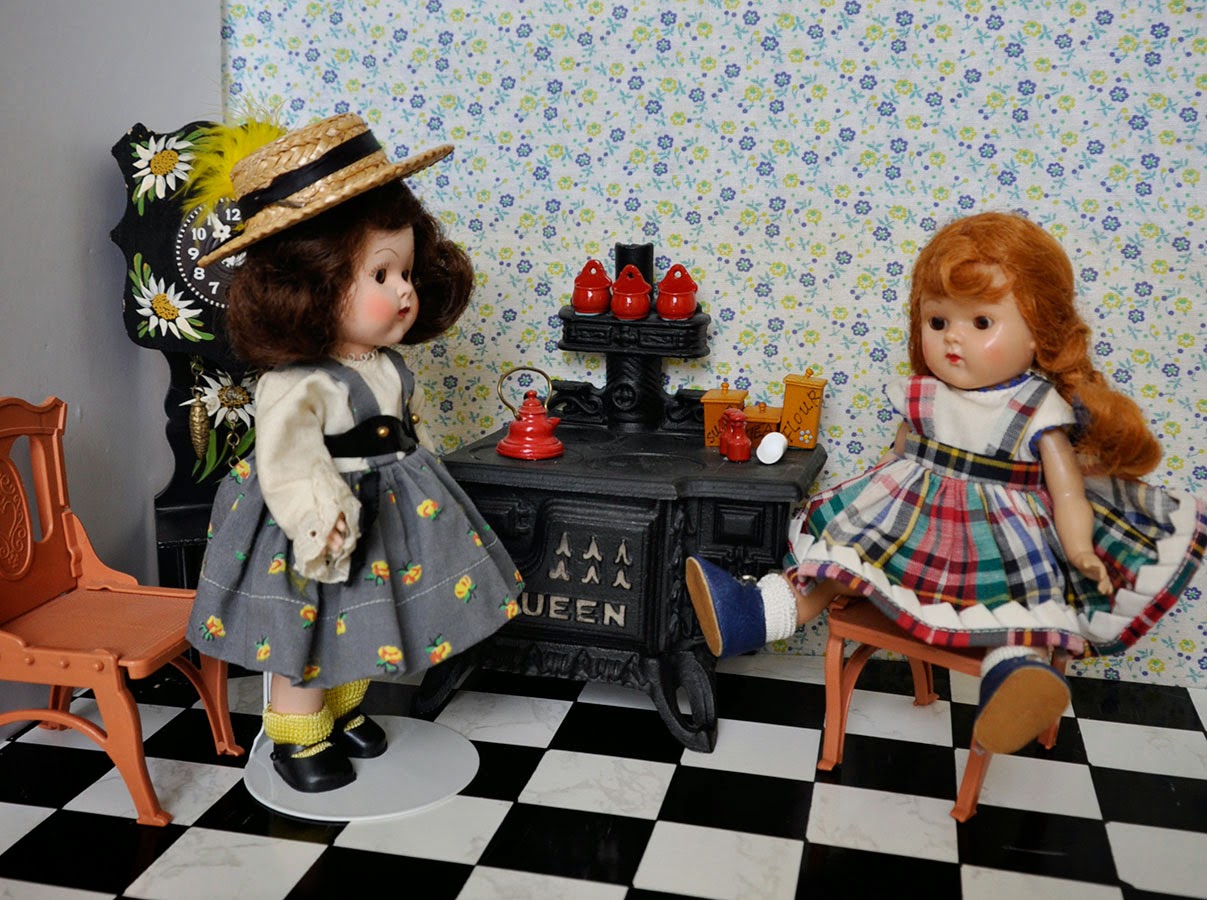 I collected Ginny dolls for several years and acquired quite a few.  After my divorce, I sold several to help with my move into my own place.  I allowed myself to keep 25.  This is a 1951 Kindergarten Dawn that remains in my collection today. 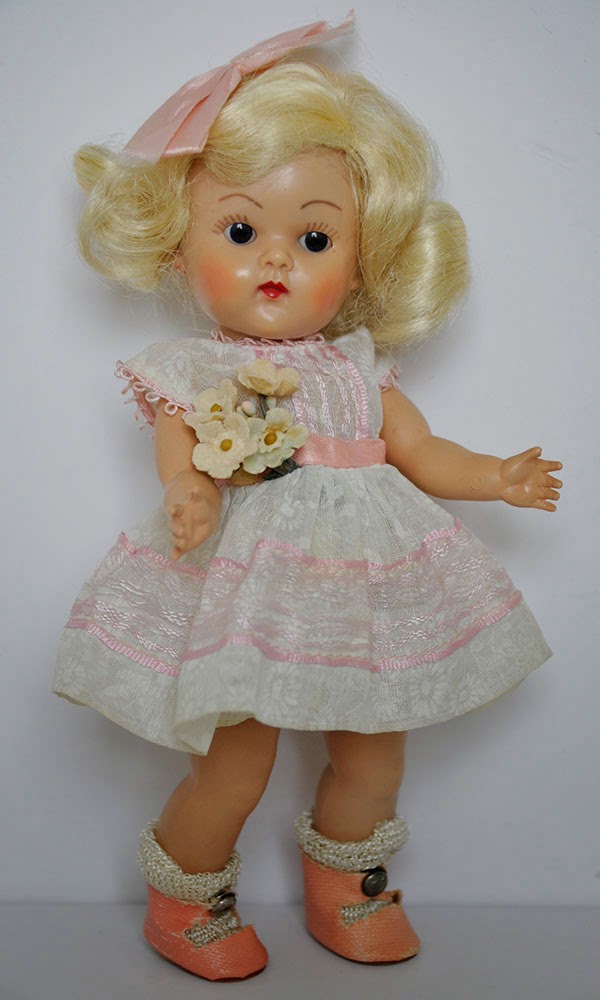 These dolls were made with a great deal of attention to detail.   There are ribbons and laces, flowers and bows.   How could you resist them?  They were produced with wigs glued to their heads.  Most wigs were a "flip" style.  Some were lamb skin and looks like little tight curls.  Here is a 1951 Tina that I recently sold. 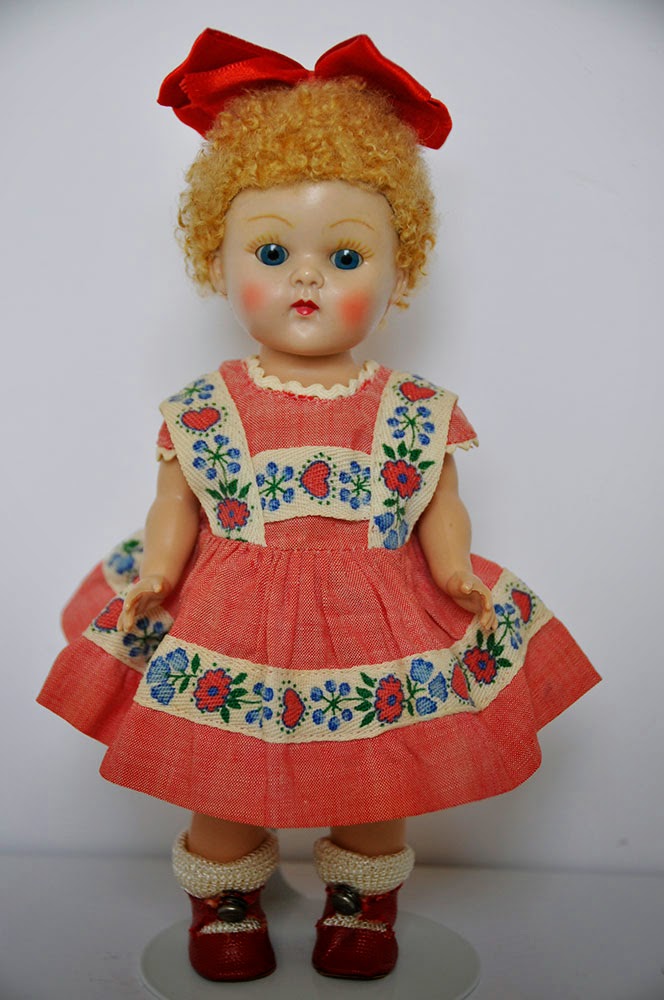 And some them had the cutest pigtails!  Like this 1953 Tina. 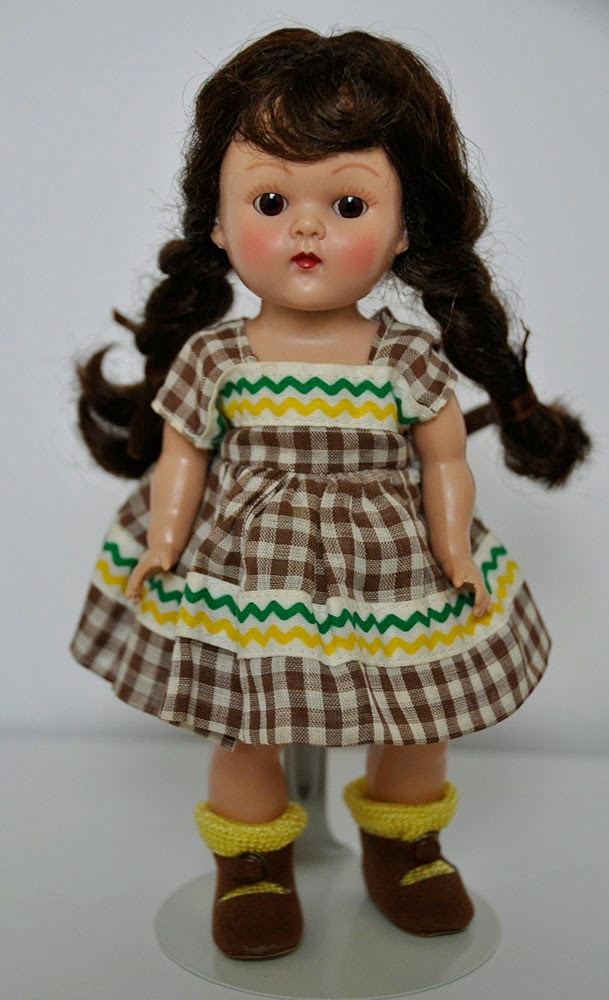 Although many of them had bows in their hair, there were some pretty gorgeous hats created for several outfits.  Here is a "Candy Dandy" from 1954.  How cute is that?  The shoes changed from "leatherette center snaps" to these rubber shoes in 1954. 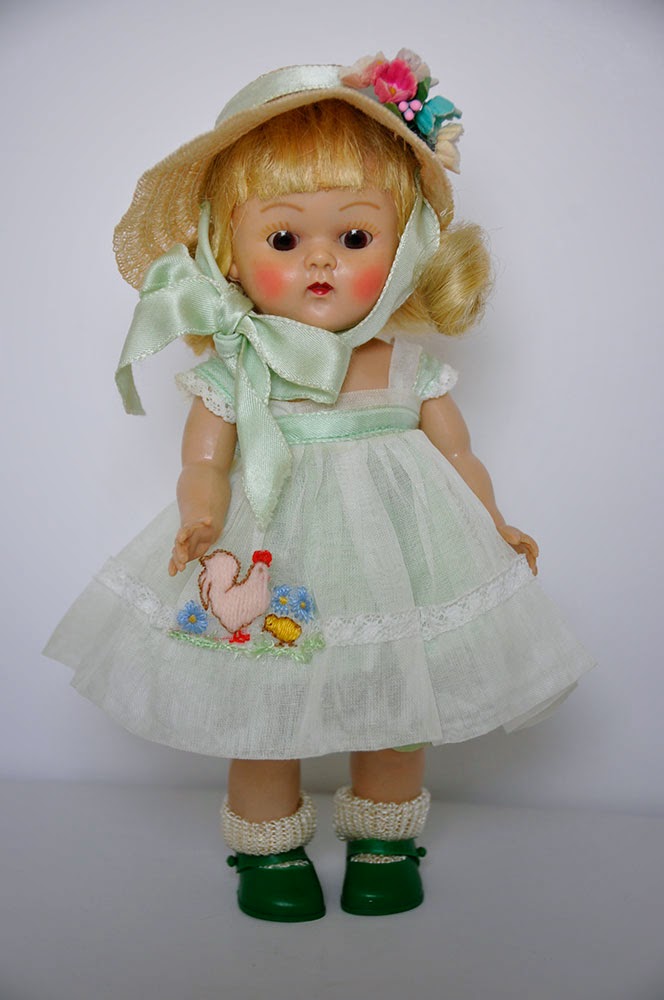 Since my second marriage, these poor little dolls have remained boxed in a closet while I play with my latest passion - Fashion Royalty.  So, I sent them to live with new caregivers this summer.   Although I sold most of my collection, there were a handful that I couldn't bear to part with just yet.

Just like the effect on Vintage Barbie sales when Mattel started releasing their "reproduction" line, Vogue started a similar "reproduction" line of the Ginny's a few years ago.  The prices of these darling little dolls have fallen considerably.   However, as I get closer to retirement, I realize more and more that it's time to pass these to the next generation of collectors.