I have recently been trying to keep the models used in my flickr photos from being duplicated which caused the Tag Game to be even more challenging.

When I think of Black and White photography, I tend to think of glamorous Hollywood actresses from the 1930's - 1960's.  This lead me to choose a mini-Gene for Day 1 of the challenge.  Here is a portrait shot of Mini Gene Red Venus. 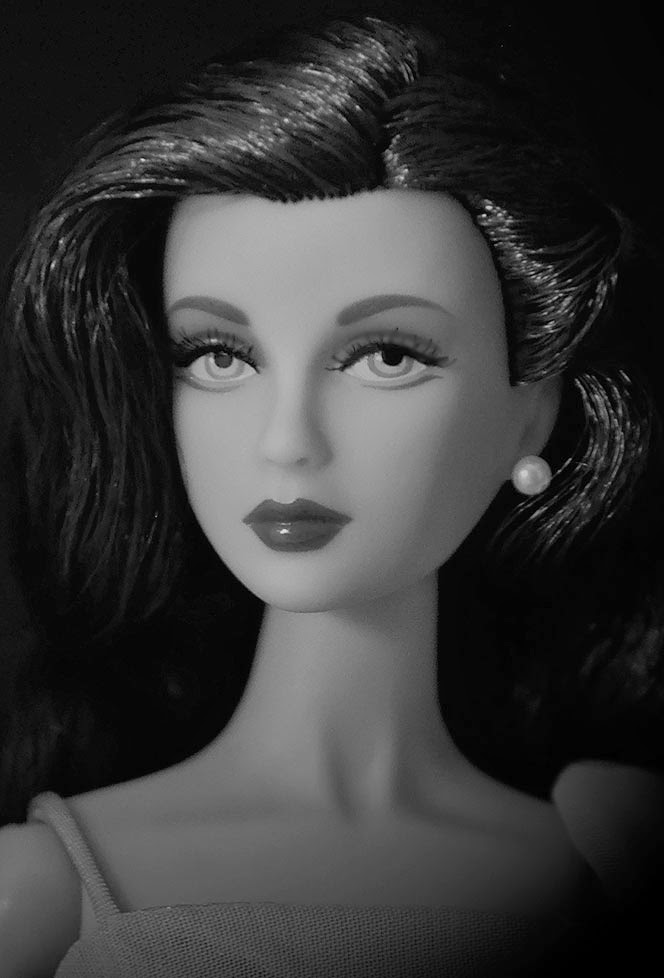 As much as I liked the result, I knew it was time to pull out some diorama items.  Some of my personal favorite pieces are the Silkstone Vanity, dressing screen, dress form, and mirror.  I decided to go for a "pin up" girl and reached for Disclosure Monogram.   I have never redressed this doll.   I think she is just so gorgeous just the way she was produced. 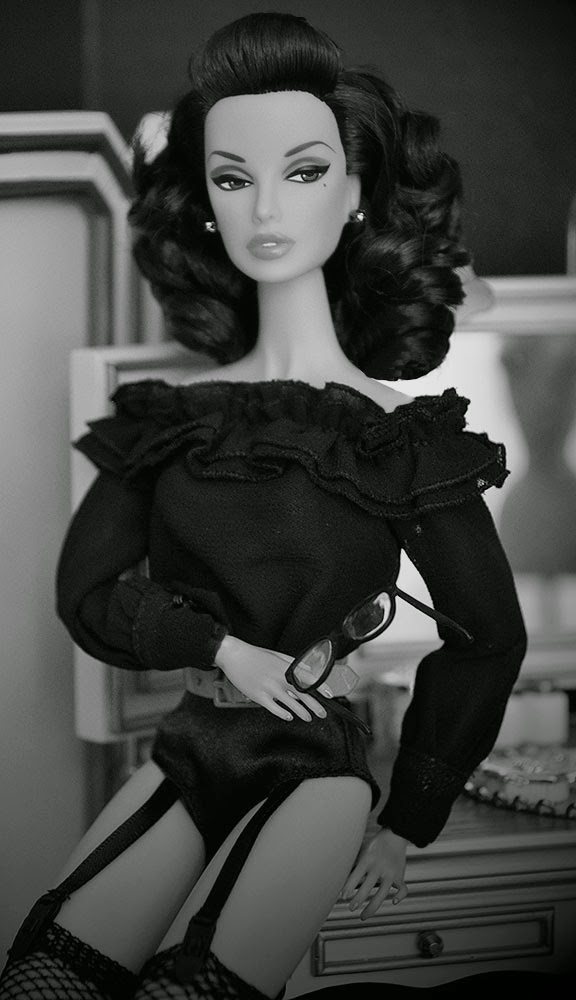 I was very pleased with the results of the photo, especially the reflection of the dress form in the mirror.   Now, it was time to capture a more alluring doll.  My favorite dressing robe ever produced by IT is Urban Geisha Kyori.  After seeing the photos posted by a collector who put this doll on a NuFace body, mine has been on that type of body ever since.  Isn't the embroidery work on this robe amazing?

As much as I liked the full length photo, I decided to go for something that shows the beauty of this doll's face up. 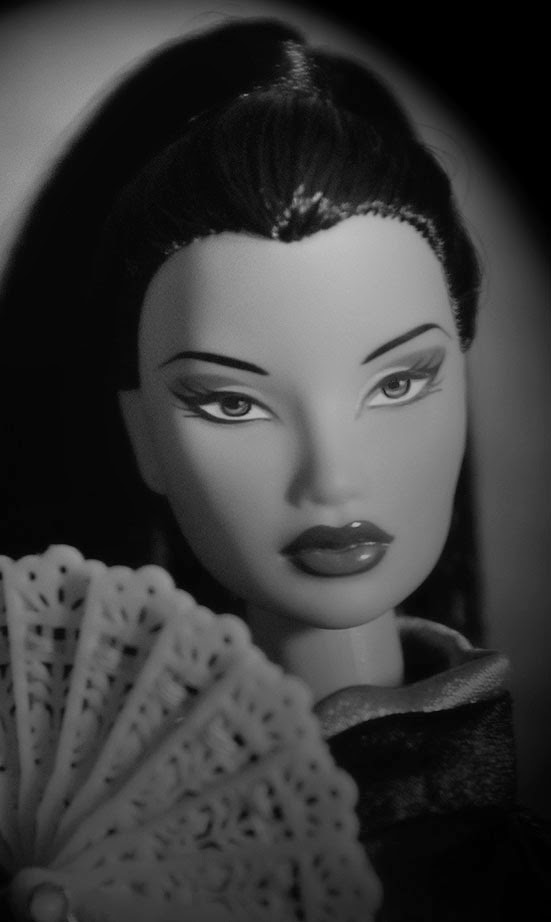 I was beginning to feel a little relieved.  It turns out there are several dolls around here that haven't been highlighted on my Flickr account.  I decided it was time to put a more "full-figured" girl in front of the lens.  I had been thinking of selling Monaco Royale Vanessa, but she reminds me so much of Diana Prince, Wonder Woman's alter-ego.  I really hope IT decides to do more with the mold. 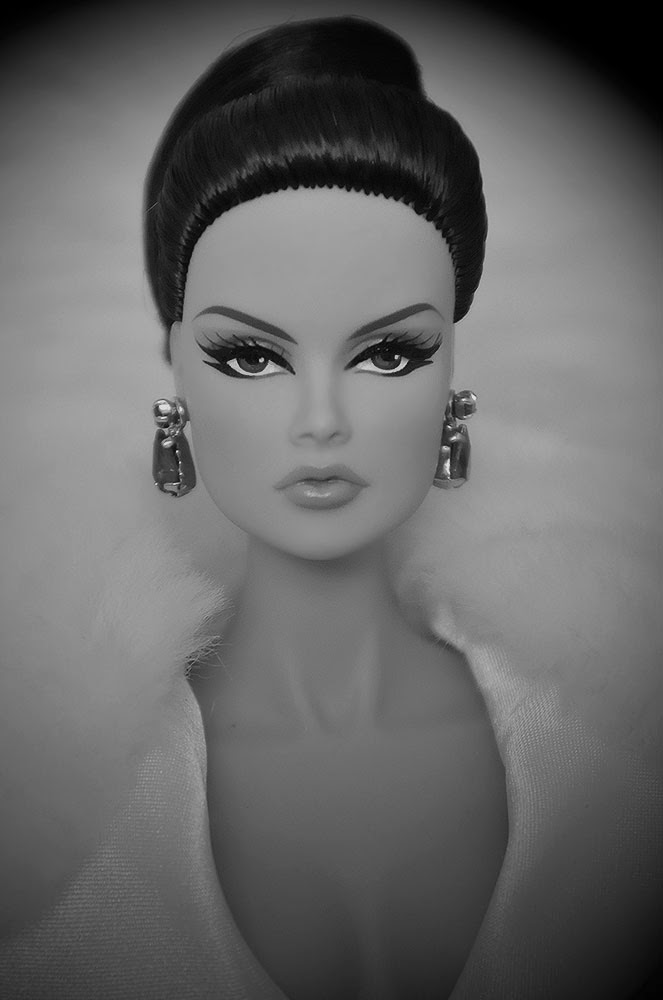 As a final choice, I had saved my favorite IT mold of all.  I was surprised to find that High Profile Eugenia hadn't been photographed in a very long time.  I think she was the best doll from the Tropicalia Convention, the only doll convention I've ever attended. 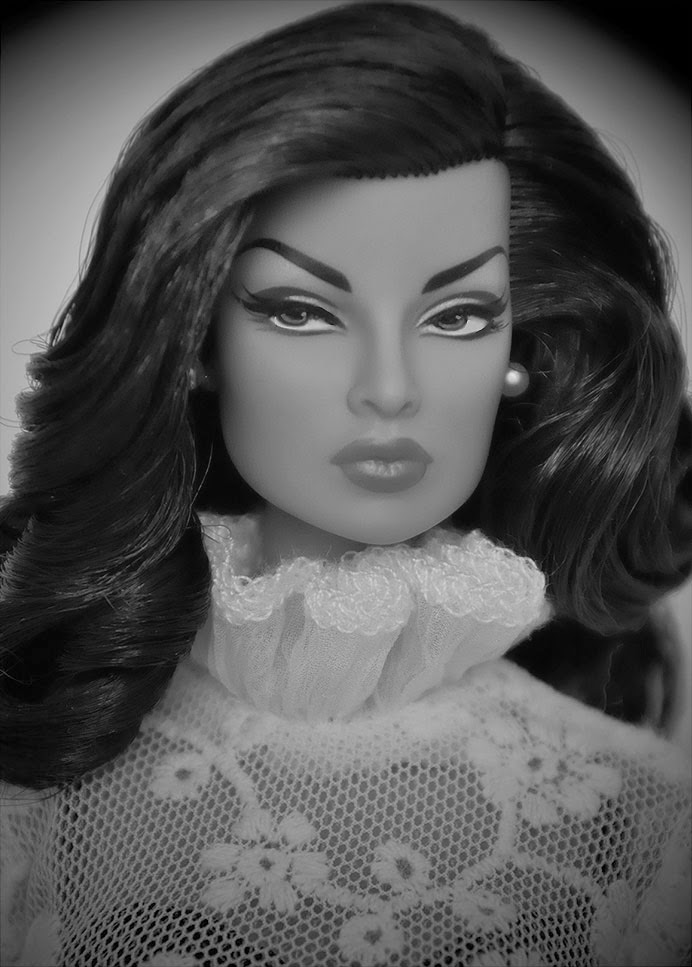 As much I enjoyed this Tag Game, it was a lot of work.  And even though I really like the portrait of High Profile Eugenia in black and white, she looks better in color. 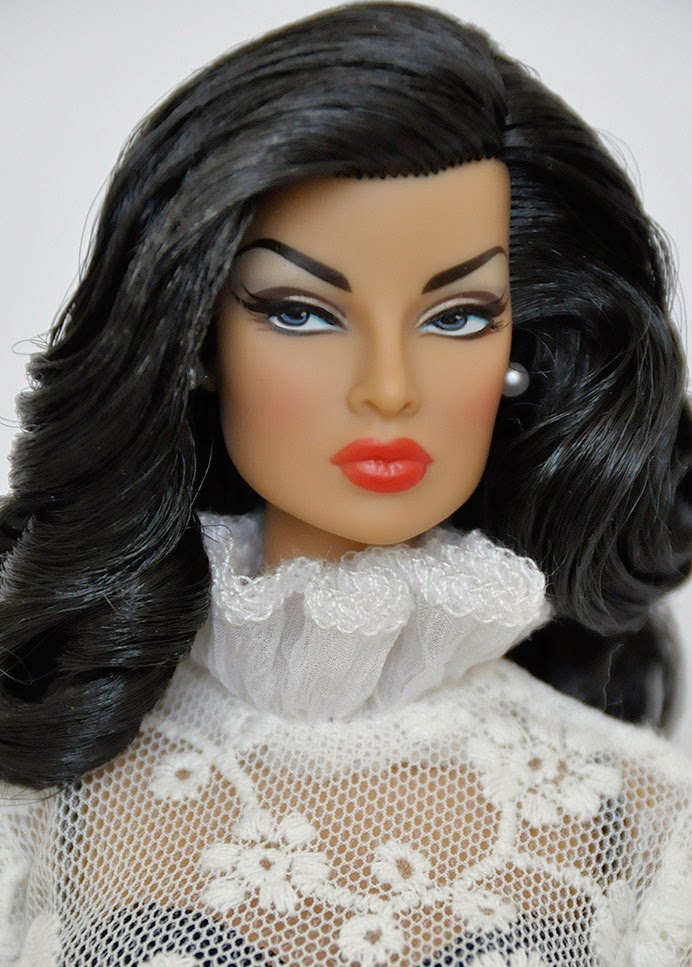 Posted by Desperately Seeking Dolls at 6:53 AM 7 comments:

Giselle is one of my favorite NuFace characters.  She looks so much like a younger version of Agnes Von Weiss.  I fell in love with her when she was released as Costume Drama.  I took so many photos!

Even though she is a preferred model here, I have sold several versions of her.  When I first saw Sensuous Affair Giselle announced as a table centerpiece from the Gloss Convention, my initial response was … "Meh … I had Old Is New and sold her.  I don't need to purchase this doll."  That feeling lasted for about a New York minute.   Here she is still in her box.

Her hair is multi-tone and quite luxurious (which is a common thread among the Gloss convention dolls).   She has wonderful green eyes and a neutral makeup palette. 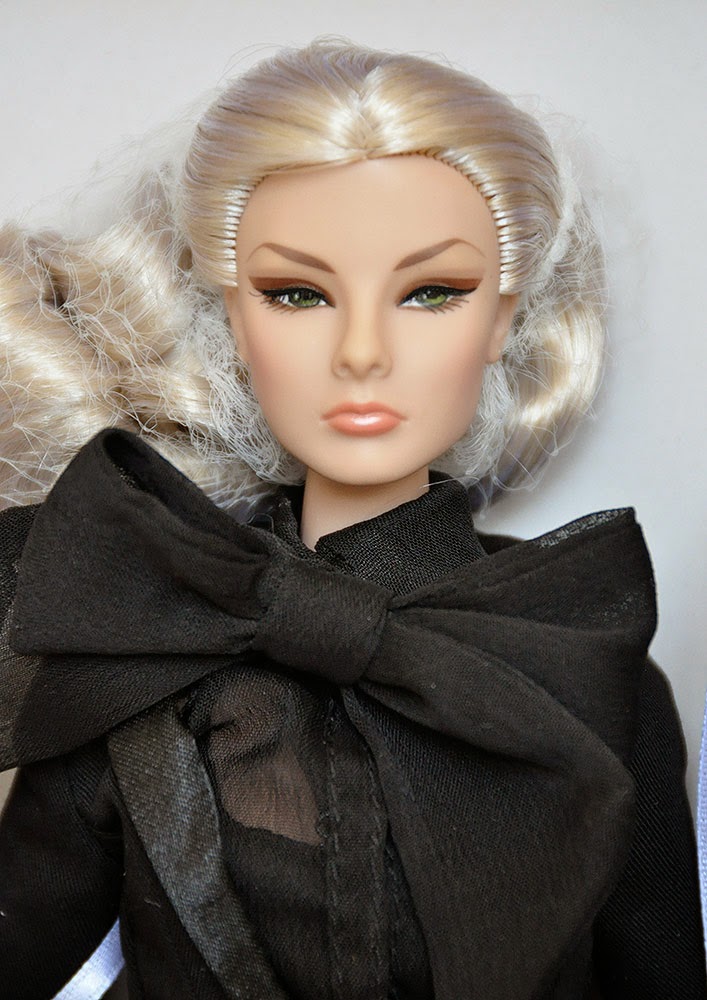 The stock for this doll is gorgeous.  Those boots are amazing and, fortunately, have a zipper in the back.  Of course, I instantly fell in love with the little tuxedo crop jacket.  That ring is awesome!

But this doll truly comes alive when her hair is combed out and she is given something more casual to wear.

The revised NuFace body did not hit me as negatively as the FR2 body did.  I don't know if it's that I have gotten used to the style, or the design team corrected some of my problems with the original FR2 body. 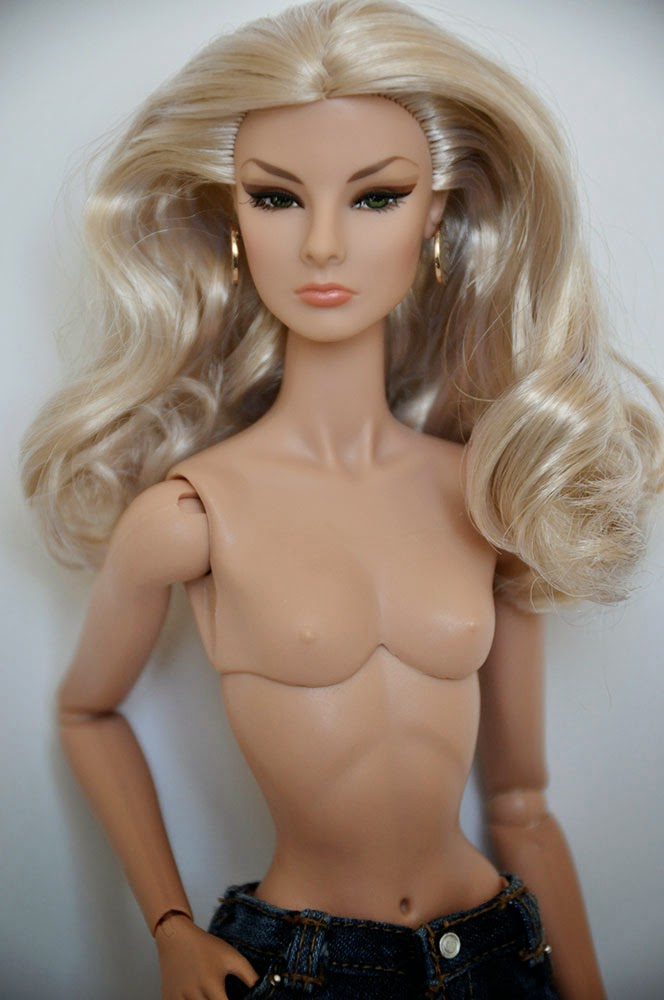 Since the breasts are smaller they don't "stand up" quite so much, looking more realistic.  The FR2 body looks like a "bad boob job" to me - they sit too high on the breast plate.  The waist on the FR2 body is also too high for my liking.  The NuFace version seems to have better waist definition, although the hip joint does not sit firmly together.  Overall, I actually like the NuFace body much better than the FR2 one.  I told a friend that, even though I really LOVE the NuFace body, this body is quite appealing to me.

(NOTE:  Several collectors have complained about "wobbly-headed" dolls.  My Giselle also had a tendency to act like a bobble-head doll.  I have read that some collectors have successfully used rubber bands or dental bands used for braces to help fix the problem.  The best solution I've read so far is to take one of those ribbon ties IT uses in their packaging to hold the dolls in and tie it around the neck knob, knotting it.)

Regardless of the body.  This doll's stock, face up, and hair are amazing.  IT gave collectors quite a beauty in Sensuous Affair Giselle. 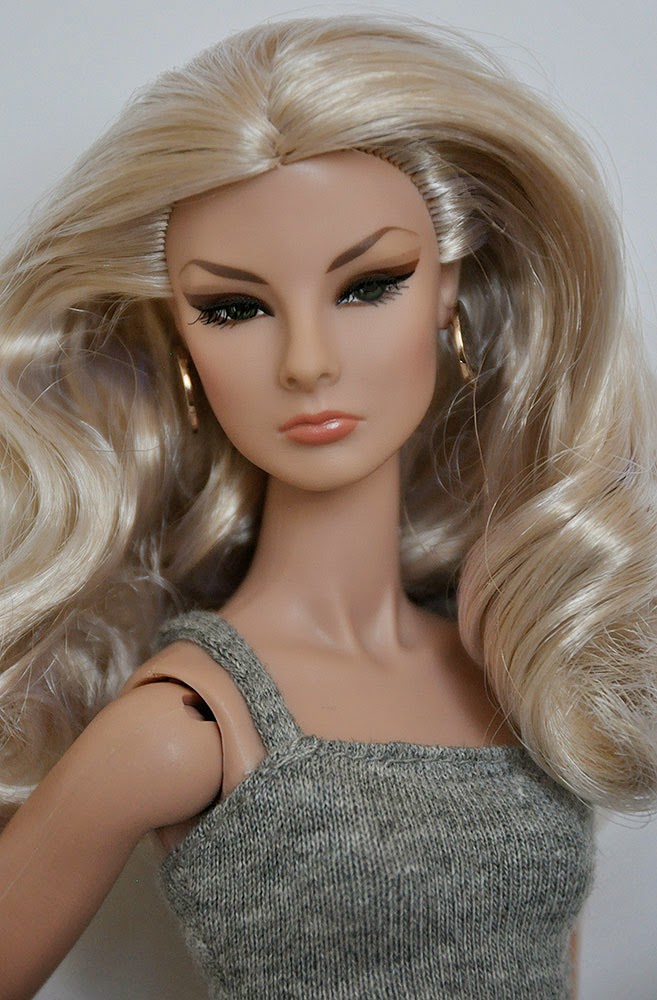 Posted by Desperately Seeking Dolls at 5:49 AM 2 comments: