Pity Party - Table for One

Last year, I lost my mother to cancer in October, so I've been dreading this month.

I had planned to attend the W Convention and found out when school started that October 10 was a required furlough day for teachers.   Even though I wasn't getting paid for the day, I still couldn't take the day before or after off without loss of pay for those.  If I took Thursday and Friday, I would've lost two more day's pay. So I had to watch from the sidelines ... AGAIN.

A very odd thing started happening before the convention this year.  MANY convention goers started "pre-selling" convention dolls.    I am assuming they were trying to add to their convention budgets before pulling out of the driveway.

They sat prices as much as three times retail to see if collectors would actually buy those "pigs in a poke".  Obviously, there are a lot of people who like pork.  I watched as "sold" posts flew all over the place.   I was horrified ... I began to panic ... I even sweat a little ... what if I couldn't buy a convention doll because they were ALL already promised before the event ever took place?!

I watched as the "For Sale" posts dwindled.   I do not like commiting funds to a doll without even seeing it first, but I AM an Agnes-addict.  I bought the very first Agnes and own almost all of them.  I bit the bullit and pre-ordered her at less than 100% markup.  I knew the seller and had transactions with her before.  She offered to check the doll over carefully before getting her for me.  I knew she would be picky, and anyway, how badly could they mess up Agnes?!

And here is the answer to that question ....  prepare youself  ... take a deep breath 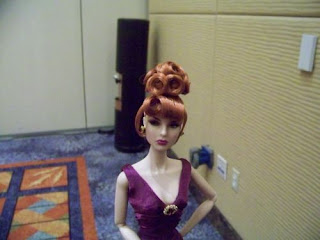 (I was given permission by the person whom I assume owns this photo to use it.   It appeared on e-bay.) Can you believe it?  I hope she looks better in person?   And the crazy thing is that sellers are still demanding prices for her above what I paid.  AND collectors are paying it.  I am confused!

Even sadder, all nine of the original convention exclusives were equally bad.  (The only exclusion is the dress that Adele is wearing, but it reminds me more of a Randall Craig dress than a Jason Wu.)  These dolls look like the "Invasion of the coneheads".   I'm sure their hair can be reworked, but it is all a very HOT MESS.  It looked like they hadn't had time to properly style the dolls before conventioneers were allowed to enter the salesroom.  There was even a big roll of duct tape sitting behind Agnes.  Like it was a threat to her personally, "Stand still and model that god-awful look, or you'll be wearing this duct tape!"  (Same auction and used with permission.) 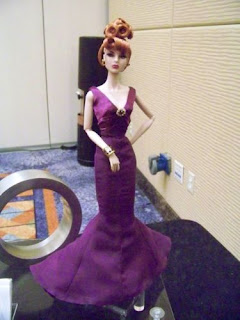 I went to my doll case and started embracing my favorites from past conventions who reside with me.   This is Jason Wu Event VIII.  I own dolls all the way back to first Integrity Convention.  I paid less for each of the dolls in the photo below than people were asking for this year's basic convention line.  They are Blue Blood Elise (Jason Wu Event VII) wearing Dark Narcissus, Smoke Screen Dania (Jason Wu Event VI) wearing Royale Material, and Shirred Not Shaken Vanessa (Jason Wu Event V) wearing Perfectly Suited. 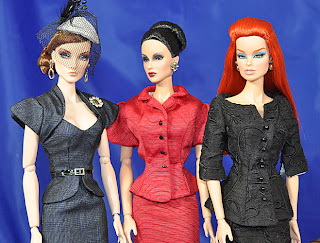 Thursday night conventioneers were given an Anja who reminded me of Temptation Vanessa.  E-bay filled with Anja offerings.  Then ... there was light at the end of the tunnel.  No Reservation Kyori, the centerpiece doll, made an appearance.  The first photos were promising.  But I decided to wait.  Here is the IT stock photo of Anja. 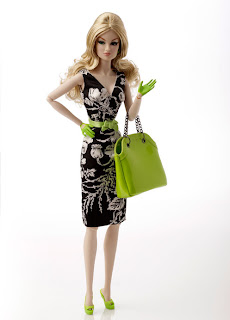 The next morning, I awoke to find photos of the new Bare Essentials dolls ... a brunette (Dania) and blonde (old Natalia).  Sellers were asking $250+ for $70 dolls.

There was a new open-mouthed Homme who looked like Wolfman Jack (maybe they are adding charactes to the Vampire Line). 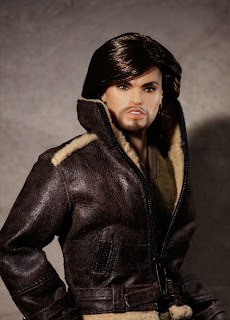 A new character and line was introduced,  Victoire Roux Faubourg Saint-Honore, and a new outift.  When I saw her, I thought, "Those eyebrows would make Brook Shields jealous."  She was a little too stern looking for me.  (IT Stock Photo) 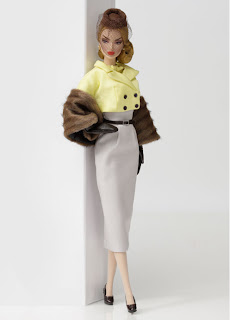 The outfit she was wearing was nice, but the jacket was similar to the one Pretty Sweet Misaki has, and the separate outfit reminded me of Hopelessly Captivating/Dark Narcissus reworked.

There was also another Imogen called City Girl.  She wasn't bad, but still not a "must own" in my book.

The day was filled with workshops ... 8 new Dynamite Girls ... 2 More Poppies ... an Imogen Workshop Girl ... at the dinner they got a new Erin and an Ayumi (haven't seen her in a while).   Dolls were coming from all directions!  It was overwhelming ... but I still wasn't impressed.

I went back to e-bay.  I decided that Kyori may be the only doll from the convention I would like.  I knew she would be hard to attain because she was a table centerpiece and there are always only 150 of them produced.   (My favorite dolls from the past five years have been the table centerpieces.)  I waited like a spider for its prey.   Finally, someone posted at a good price.  There was a photo of the actual doll.  It was NRFB and numbered 17/150.   I skillfully wove that auction in my silk thread.   Here is the photo from the auction.  I hope the seller won't mind ... afterall ... I purchased the doll. 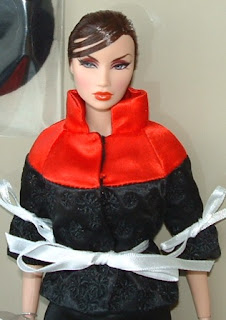 The next day I was re-energized.  I was going to own a Convention Doll I would be proud of adding to my collection.   I watched as prices began to creep down on e-bay from the standard line, and the better dolls started climbing.   A Kyori was listed for $699 (others were beginning to realize the Kyori would be the sleeper hit).   I was surprised by the sheer number of dolls for sale.   It appeared to me that quanitity was way surpassing quality this year.

Saturday afternoon brought us the additional Korinne workshop dolls, a flocked hair Auden, and even a formal version of Night Warrior Vanessa on an FR2 body.   It was a smart move to offer the old Vanessa face mold at the convention!  But, I was still not impressed.

Saturday after dinner, I showed all of the dolls from the convention to my husband.   His one comment was, "Those look cheaper than the ones you own."  The only doll he thought would fit into my collection was Kyori.  I was so glad I trusted my instincts and didn't wait.

That night, I decided to have a deboxing party ... After many years ... the prized convention doll in my collection was going to be released .... My husband told me, "It will make you feel better."  We had cocktail hour to loosen up my fingers for untying ribbons.   Here we go .... 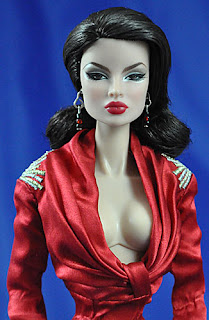 I love this doll.   She has been in her box too long.   She is amazing.  She is Fine Jewel Eugenia from Jason Wu Event V. I played with her as I waited for the Convention Doll, Centerpiece, and Build-A-Doll Giftset to be released. 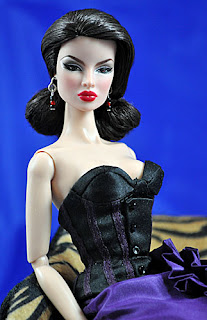 She is wearing the bustier from Go West, the skirt from Festive Decadence Agnes. and a pair of OOAK earrings.  I decided I wanted to see what it would like with a belt.

I guess playing with Fine Jewel was a good look charm.   I own both of the past giftsets Power Play Natalia and Glamour to Go Agnes.  I was hoping I would love the Jet Set Giftset.  It did not fail to impress.   Here is Veronica's photo of her.  She is coming to live with me also!  Yippee! 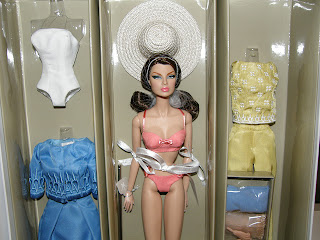 The table centerpiece was a Monogram.  I had expected one to show up since we hadn't seen one yet in the convention.   And the Convention Doll was Veronique.  She looked like they took the new mold, put on a Lights, Camera, Royal hairdo from the Jason Wu Convention III centerpiece doll, and dressed her in Randall Craig.  I do like the little pearls in the bodice though.

I guess, in the long run, I saved a lot of money by staying home.  There were only three dolls from this convention that I really like, and I acquired all three for less than the price of the airfare, convention registration, and one night's hotel stay.   AND I did it all while in my pajamas!

I'm not sure about planning for the convention next year.   This year the convention ended with the addiiton of 38 dolls ... I cannot even imagine the purchasing cost of all of those dolls at regular retail, much less secondary mark-up.   I wouldn't have anywhere to even put that many new dolls.  Unfortunately, I believe Integrity is losing that feel of "specialness" collectors used to get from owning a couple really great dolls.   They need to realize that too much of a really good meal can even make you sicker than a dog.  Of course, there is something for everyone ... but like the old saying goes ... If you try to please everyone, you'll wind up pleasing no one.  I hope the tides change ... I guess it is yet to be seen.
Posted by Desperately Seeking Dolls at 8:52 PM 3 comments: