I have tried to be very upfront about all of my doll collecting this year.  Even though sometimes I am a little ashamed by what I've acquired.

My husband is not quite as forgiving as many of my dolly friends are.  I read him my last couple of posts and his questions were:

1.  What doll did you debox so that you could keep Kyori NRFB?

2.  Why aren't two of my dolls from the doll show listed in my dolls that are staying?

You see, I made the unfortunate mistake of letting my husband in on my doll rules.  When I told him about them, he insisted that I print them out and hang them in my dolly room as a reminder.   He has been incredibly good at helping me stick to them.

Question 1:  What doll did I debox?  I tried to explain that I had deboxed several dolls this year as evidenced by my blog:  Power Game, Femme du Monde, and Private Goddess Natalia; Fine Jewel and Spring Forward Eugenia; and The Royal Weiss and Glamour to Go Agnes.  Ialso deboxed Style Mantra Eden, Masterpiece Theatre Giselle, and Making A Scene Erin this year.  That's 10 dolls.

But that wasn't good enough.  Those were dolls that had already been deboxed before Kyori even got here.  So, I went to the closet and took out a "Holy Grail" doll that was still NRFB. 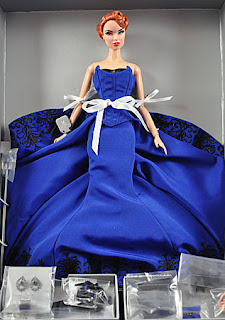 Here is a close up photo of her.  Her hair is perfect and her face-up is divine. 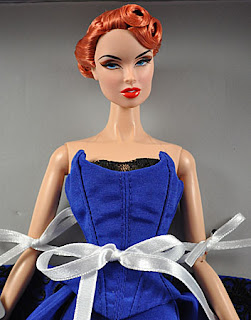 Flame Blue Vanessa has been released.  I knew I would never sell this doll because I only got her because my best dolly friend, Reese, helped me get her.  Isn't she gorgeous! 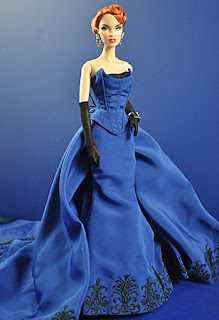 I love the attention to detail with doll.  The jewelry is incredible!  And look at how this veil is made! 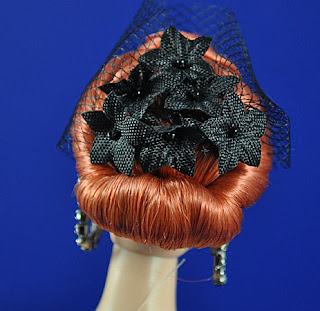 So, I'm glad that my husband held me accountable and got Flame Blue out of her box.  She came with the nices garter set and hose! 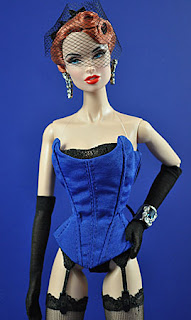 On to Question 2.  Why aren't the other two dolls I acquired at the doll show on my acquired list?  I tried to argue that they weren't staying.  He knew that Cruella was leaving and gave me that one, but insisted I make a decision on Jakks Pacific Lola and Modern Circle Simone.  I explained that I was going to rebody them.  Still no leeway!

I learned an important lesson which may become Rule 7:  Don't read your blog to your husband.  I'm just glad he wasn't home for the mail carrier this week!  Style Counsel Giftset and Les Silhouettes Victoix came in the mail!

Darling, if you are reading this ... don't forget my rule about having two weeks to make a decision on any doll!  I'm not budging on that one!

**********﻿
I have decided to try a new feature this week.  "Who Could You Be?"  There are several dolls that I own that remind me of celebrities in some way.  So, this week is the first installment.  It took me forever to figure out who Monaco Royale reminded me of.  I put some glasses on her and it hit me! 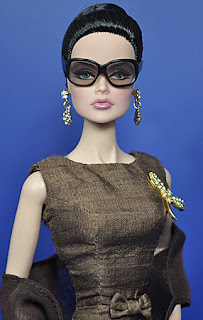 Doesn't she look like Wonder Woman's alter ego, Diana Prince?  What do you think? 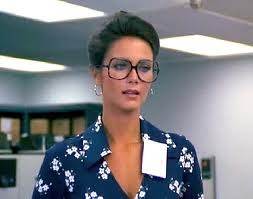 Posted by Desperately Seeking Dolls at 6:22 AM

Nothing like someone else trying to hold you to rules you made for yourself. That would drive me crazy. Now I see why I got the plane and you didn't. LOL. Funny thing is there is no one here to criticize my purchases, and sometimes they still spend months in the trunk of my car. What's that all about? Yes, she does look like Wonder Woman's alter ego, but I never would have guessed that without your help.

Another great post Robyne! At least your husband has some sort of interest in your collecting. My SO only says: "Uh-huh."

And I think Vanessa is pretty much spot on. My take though is to enjoy YOUR collection no matter what.

Ok Girl you need to add another rule..NEVER let the hubby or your partner see the rules..LOL. I have my own set of rules but I have to admit that my SO never has really been strict on my purchases.

Now that he can recognize the different lines of dolls it's a bit more difficult to hide anything from him..LOL. I haven't hidden anything in years but still he's become wise